Beatrix Potter, the creator of The Tale of Peter Rabbit, remains one of the best-selling English writers and illustrators of all time. Discover Potter’s life and legacy. 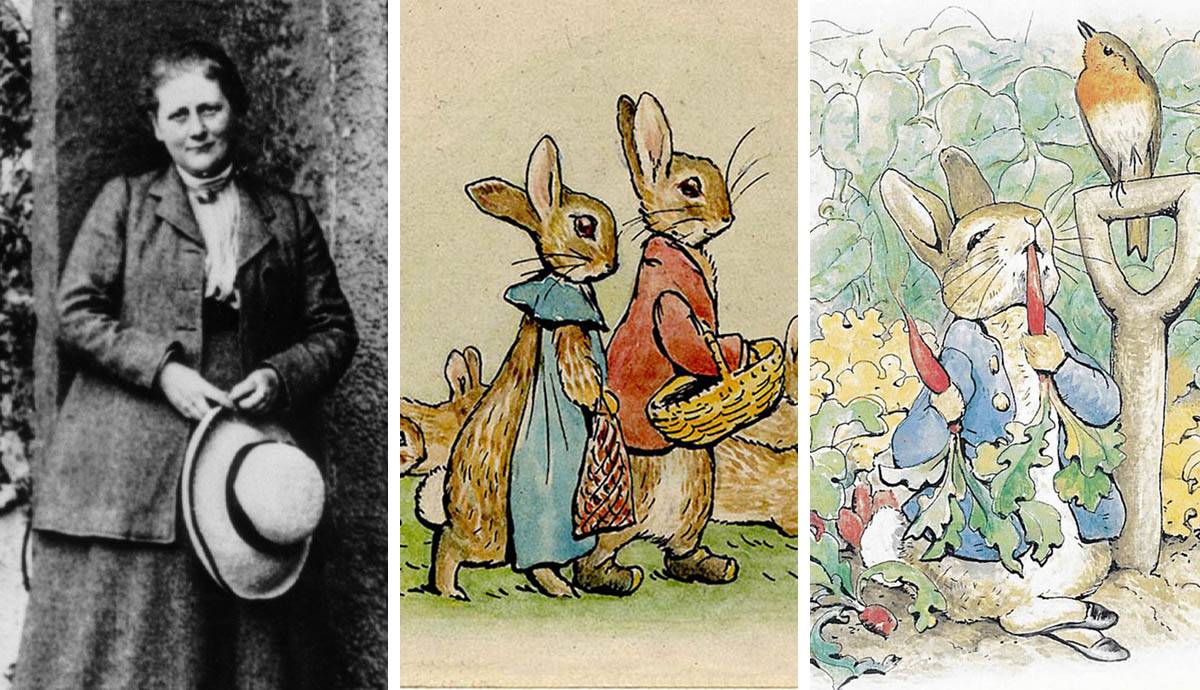 Born Helen Beatrix Potter, the English writer and illustrator behind the beloved world of Peter Rabbit and other delightful creatures had an unusual upbringing that inspired her prolific work as an adult. Along with her brother, Beatrix Potter was raised by artistic, nature-loving parents in the English countryside. The Potter children were largely isolated from their peers and, instead of attending school, were educated by governesses in their home. They also enjoyed keeping dozens of small pets—including mice, rabbits, and even insects and bats—which they observed and frequently made drawings of as part of their home education. Beatrix Potter loved her pets so much that they often accompanied her on family holidays away from home.

As a teenager, Beatrix Potter became more serious about honing her skills as a watercolor artist and made many visits to London’s art galleries. As a burgeoning artist, she managed to develop a unique personal style while staying informed of the prevailing styles popularized by the most successful contemporary artists. Family friend and Pre-Raphaelite artist John Everett Millais recognized Potter’s burgeoning talent and encouraged her to continue seriously studying art.

Although she pursued some formal education in the arts, Beatrix Potter was mostly self-taught as an artist. She spent years observing plants, animals, and insects and making detailed drawings of them. She also practiced copying the works of famous British artists whose works she studied in books and galleries, including the landscape paintings of John Constable. Potter always maintained that receiving a formal art education would have “rubbed off some of the originality” of her work.

Despite lacking formal schooling and academic qualifications, Beatrix Potter was passionate about natural science topics from early childhood, including biology, botany, and mycology, which were popular fascinations in the Victorian era. Much like her approach to teaching herself art, the English writer carefully studied and illustrated animals, insects, plants, and fungi from life and from books, developing a keen skill at scientific observation alongside her artistic expertise. By adulthood, Potter had zeroed in on mycological illustration. As an illustrator, she used pen, pencil, and watercolor to beautifully and accurately capture the colorful and mysterious fungus specimens she collected—some of which were microscopic in size.

The English writer studied mycology alongside experts, including those at the Royal Botanic Kew Gardens. She embarked on an ambitious project compiling scientific research and detailed illustrations of fungus spores in order to propose her own theory about how the fungi reproduced. Potter submitted a research paper to the board of experts at the prestigious Linnean Society of London in 1897, which ignored her due to her gender and amateur status. Potter ultimately withdrew the paper and its illustrations from consideration. In 1997, one hundred years later, the Linnean Society offered a formal apology for the sexism that Beatrix Potter experienced.

As both a scientist and an artist, Beatrix Potter’s medium of choice was watercolor and ink. To create an illustration, Potter would begin with a light graphite pencil to make sketches on watercolor paper of her subject, typically observed from real-life examples to create an accurate rendering. Potter’s style is distinctive for its thinly and loosely applied watercolor paint and black ink linework. After sketching the outline of her illustration with pencil, Potter applied multiple thin layers of watercolor to achieve a foreground and background and to bring to life the various interesting and distinct textures of her subjects. After the watercolor paint was dry, the English writer would add outlines and details using pen and ink. She was selective about where and how she placed these outlines in order to preserve the whimsical nature of her watercolor application.

In addition to her watercolor drawings of mushrooms and other scientific specimens, Beatrix Potter designed illustrated Christmas cards as a way to earn money for herself and her family in the 1890s. The subjects of her designs were usually small, anthropomorphized animals in whimsical fantasy situations—a very marketable genre at the time. A large publishing firm discovered Potter’s Christmas card art and purchased a design of her first original character, Benjamin Bunny. Potter went on to sell additional illustrations of her unique animal characters to a variety of publishers and soon became determined to write and publish her own series of illustrated children’s books.

Why Beatrix Potter Was All About Animals

Beatrix Potter’s childhood love of small animals—as pets, as objects of study, and as subjects for watercolor illustrations—paved the way for her to become an author of children’s books about small animal characters. Potter’s expertise at rendering scientific drawings of natural science specimens—which required keen observation skills and a thorough knowledge of plant and animal anatomy—meant that she could draw convincing, lifelike animals. Her proclivity towards art and imagination meant that she could also imbue her animals with playfulness and personality.

Beatrix Potter’s whimsical animal tales resonated due to their dynamic illustrations and imaginative, accessible stories that lack heavy-handed morals and instead focus on bringing to life the playfulness and mischievousness of her memorable animal characters. During Potter’s life, children’s stories about animals were immensely popular—but her contributions to the genre were unique and enduring.

Edwardian era animal stories usually contained humanlike animals who taught a heavy-handed moral lesson, but the English writer characterized her creatures differently. Her animal characters took on human emotions but still behaved like animals, and her ability to render them and their surroundings so realistically gave them a fun and convincing life of their own.

The Invention of Peter Rabbit

Peter Rabbit, Beatrix Potter’s most beloved animal creature, was first created in a handwritten letter from Potter to her former governess’s son Noel, wherein Potter improvised a story about a mischievous young rabbit’s hijinks. The original letter, written in 1893, was complete with playful ink-drawn illustrations that introduced Peter Rabbit. A few years later, Potter further developed the character of Peter into The Tale of Peter Rabbit and submitted the finished book to several publishers.

Surprisingly, Potter faced many rejections and a failed attempt to publish the book privately. But in 1902, the publishing house Frederic Warne & Company accepted and published The Tale of Peter Rabbit—and the book was an immediate and enormous success. In the following years, Potter went on to successfully publish 23 books, including The Tale of Squirrel Nutkin and The Tale of Benjamin Bunny.

Beatrix Potter wasn’t just a prolific English writer and watercolor artist, she also had a very keen mind for the business side of being a bestselling author. After the success of The Tale of Peter Rabbit, Potter quickly created and secured a patent for a Peter Rabbit doll. This was the first of many merchandising endeavors—which went on to include board games, activity books, home decor, baby accessories, and more—that would prove to be a huge financial success for both Potter and her publisher.

For the rest of her life, Potter earned an independent income through the sale of her books and licensed merchandise. In her later years, Potter’s focus turned away from writing children’s books and rather towards farming prize-winning sheep and advocating for the environmental conservation of England’s famous Lake District.

Since Beatrix Potter’s death in 1943, her life’s work has been preserved and exhibited by many British art institutions, including the British Museum, Tate Gallery, and Victoria & Albert Museum. Additionally, most of Potter’s original illustrations for her children’s books were left to the National Trust. Potter also kept and donated albums of her mycological and other scientific drawings to various institutions. The English author’s most famous book, The Tale of Peter Rabbit, has sold over 150 million copies in 35 different languages since its publication over 100 years ago. Today, Beatrix Potter’s beloved children’s books continue to be published and sold around the world, and they still resonate with readers—children and adults alike.