Did Bernini’s Ecstasy of Saint Teresa Cross the Line?

Condemned as “too physical” by some contemporary critics, Bernini’s masterpiece, Ecstasy of Saint Teresa, still managed to find its way into an Italian church. 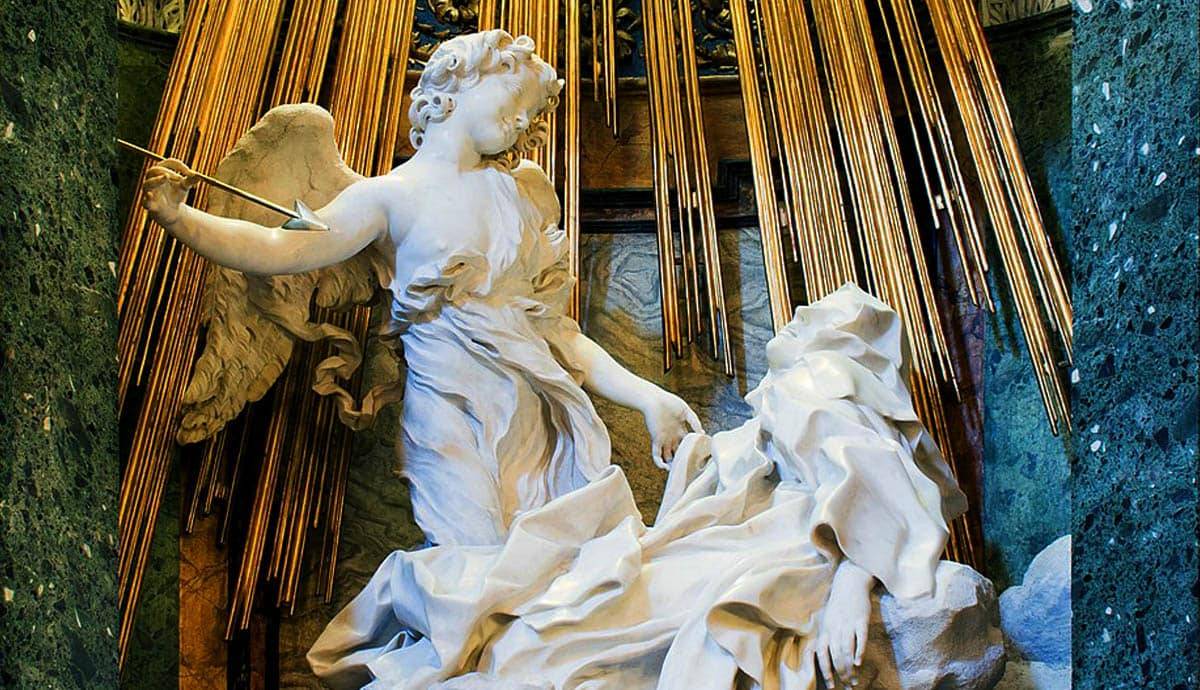 The Church of Santa Maria della Vittoria in Rome holds one of the most unusual baroque sculptures, the Ecstasy of Saint Teresa. From the moment Gian Lorenzo Bernini finished it, the sculpture was labeled as problematic for its focus on the physical instead of the spiritual. This label stands even today and is echoed by modern authors. In his novel Angels & Demons, Dan Brown writes, “St. Teresa was a nun sainted after she claimed an angel had paid her a blissful visit in her sleep. Critics later decided her encounter had probably been more sexual than spiritual.” Down below, we will go into a more in-depth approach to why this statue is overtly physical.

Ecstasy of Saint Teresa in the Eyes of Contemporaries

The majority of Bernini’s contemporaries received this sculpture in a positive light. This can be seen in the writings of his biographers, Domenico Bernini, the sculptor’s son, and Filippo Baldinucci. Domenico claims that Saint Teresa was his father’s most magnificent work of art. He describes it as the sweetest ecstasy with an angel who stands above the saint and pierces her heart with his golden arrow of divine love.

From Domenico’s biography, we learn about which moment Bernini decided to represent. Bernini decided on visualizing the height of her mystical experience. In Baldinucci’s biography, Cornaro Chapel takes the place of Bernini’s greatest masterpiece in Rome. Both biographies tell us of a well-received artwork, but Ecstasy of Saint Teresa had its critics, as well as Bernini.

Contemporary critics have described the Ecstasy of Saint Teresa as overly physical. Only one written source of this opinion remains, and its author is not known. He claims that the problem with the sculpture is that the peak of the ecstasy is presented as physical pleasure. The sculpture equals indecent and sexual, and to the author of this document, this also reflects Bernini’s own religiosity and morality.

Who Made the Ecstasy of Saint Teresa?

Gian Lorenzo Bernini was born in Naples in 1598, the son of Florentine sculptor Pietro Bernini. Together with his family, Lorenzo moved to Rome around 1605, a city that he rarely left. It would take an official summons by the French King Louis XIV for him to leave Rome. During his life in Rome, he was considered an equal to Michelangelo, with whom he shared a passion for sculpture and marble.

Bernini began his career as his father’s apprentice in the chapel of Paul V in the Church of Santa Maria Maggiore. While working there, he caught the eye of Cardinal Scipione Borghese, one of the wealthiest art patrons in Rome. Bernini stayed in the cardinal’s service until 1624. The Catholic Church was his greatest patron. Bernini developed his art working on commissions for Popes Urban VIII and Innocent X, during whose pontificate Ecstasy of Saint Teresa was made. But it was only under Pope Alexander VII that his authority over the artistic life in Rome was assured, and all the important commissions were passed to him and his associates. Historically, the most significant commission he had in Rome was the architectural, sculptural, and decorative work on the Basilica of Saint Peter in the Vatican, where he worked until his death in 1680.

The Life of Saint Teresa of Avila

The most significant source for our knowledge of the life and work of Saint Teresa of Avila is her autobiography. Teresa was born in 1515 in the Spanish region of Avila. She is considered one of the most significant Spanish mystics, Carmelite nuns, and theologians in the Catholic Church. Her life coincided with significant changes within the Catholic Church. In Spain, the Inquisition was started in 1478 by Pope Sixtus IV, Martin Luther initiated the Protestant Reformation in 1517, and the Counter-Reformation and the Council of Trent soon followed.

She continually worked on her writings during her life, which are still translated and published to this day. Saint Teresa wrote five books in total, including her autobiography and text of mystical experiences. Her greatest accomplishment was the reformation of the monastic order of Carmelites and the formation of the monastic order named Discalced Carmelites. By building 17 convents, she attempted to restore the order to its foundations of simplicity and humility. Meanwhile, she supported the nuns and believers in forming and maintaining a personal relationship with God. Even though Teresa’s writings and reform caused great controversies in the Catholic Church, she was canonized by Pope Gregory XV in 1622, forty years after her death.

Where Is the Ecstasy of Saint Teresa?

The chapel where Ecstasy of Saint Teresa is located is a funerary chapel of the Venetian family Cornaro. It is situated in the northern part of the Church Santa Maria della Vittoria. Cardinal Federico Cornaro commissioned Bernini in 1645 for the construction and decoration of the chapel, and by the end of 1652, the work was finished. As the focus of the chapel, Bernini sculpted out of marble a sculptural group consisting of a seraph with a golden spear, ready to pierce Saint Teresa laying on a cloud. Above the sculpture, a window was built in, so light could go into the chapel, directly illuminating the work.

This sculptural group is not just an altarpiece but also part of a bigger performance. The architecture of the tabernacle was designed to extend into the space of the believer, giving an effect of depth and leaving enough room for a window to be placed above the sculpture. Light comes in through the window and merges with the dim light of the candles, thus creating the feeling that the seraph and Saint Teresa are ascending towards the sky. The entire group seems detached from the reality of the viewer while hovering on the cloud.

Where Did Ecstasy of Saint Teresa Come From?

Since Saint Teresa of Avila was canonized in 1622, twenty-three years before Bernini began his work, he did not have a pre-established iconography to follow. Unlike the early Christian saints who have been presented in art for millennia, Saint Teresa was yet to be typified in art. Due to this lack of visual sources, Bernini had to look for inspiration somewhere else.

It is certain that Bernini used the saint’s autobiography, written in 1565, as a literary source for the production of his Ecstasy of Saint Teresa. Thus, Bernini’s representation of Saint Teresa differs from her earlier, more realistic presentations in which she is presented as a humble nun. Some of the earlier paintings of Saint Teresa did have a focus on the piercing of her heart by divine love but continuously ignored her femininity in order to emphasize her humility.

Unlike these works, the Saint Teresa in the Cornaro chapel is a young and beautiful woman. Concerning her age, Bernini disregards her writings. Saint Teresa claims to have had her first mystical experience at the age of 45. This choice of Bernini’s, together with sculpting half-closed eyes and body thrown back, has led contemporaries to associate Bernini’s sculpture with eroticism.

Today, it is widely accepted by scholars (Warma, 1984; Landre, 2015) that Bernini used the saint’s autobiography, The Life of Teresa of Jesus, as a source of inspiration. Domenico’s biography of Bernini confirms it and leads to the passage:

“Beside me, on the left hand, appeared an angel in bodily form… He was not tall but short, and very beautiful… he appeared to be one of the highest ranks of angels who seem to be on fire… In his hands, I saw a great golden spear, and the iron tip there appeared to be a point of fire.”
(Teresa; Peers, 1957)

Teresa describes and explains what happens during a mystical experience and how are one’s soul and body affected:

“The entire body contracts; neither foot nor arm can be moved. If one is standing at the time, one falls into a sitting position as though transported, and cannot even take a breath. One only utters a few slight moans, not aloud, for that is impossible, but inwardly, out of pain.”
(Teresa; Peers, 1957)

Teresa gives us the description of what this kind of ecstasy feels like:

“…no sense of anything but enjoyment, without any knowledge of what is being enjoyed… All the senses are taken up with this joy so that none of them is free to act in any way… now the soul enjoys incomparably more, and yet has still less power to show it. For there is no power left in the body – and the soul possesses none – by which this joy can be communicated.”
(Teresa; Peers, 1957)

The Theatricality of Baroque Art

When talking about Bernini’s art, one more aspect of Baroque culture must be considered: its tendency for theatricality. Baroque theater in the time of Pope Urban VIII attracted creative people, including Bernini, who occasionally worked on scenography. Looking at the chapel as a whole, from both sides of the altarpiece are busts of the Cornaro family. These statues are peaking into the chapel from side windows or rooms, resembling theater balconies. The figure on the right side of the chapel, closest to the altar, admires the scene enveloping before him, while the figure parallel to him is reading a book. Cardinals look as if in a heated debate around the nature of the experience.

They mirror Bernini’s ability to create a dramatic theatrical performance, where he united sacred and profane aspects of theater by using lighting effects, architectonic elements, and complicated actor-audience relationships. Fusing these aspects of theater, Bernini managed to create art that inspires intense religious experiences and emotions. In the Ecstasy of Saint Teresa, Bernini’s theatricality calls upon the viewer, drawing him into the scene enveloping before him while expecting his emotional reaction and participation.

In the end, we can see that Bernini didn’t necessarily aim at eroticism when creating his famed sculpture. However, the Ecstasy of Saint Teresa does depict an ecstasy experienced by both soul and body, as explained by the saint herself. Combining elements of a mystical experience and drama of theater into one sculpture, Bernini has managed to create a new way of representing religious experience while simultaneously creating a more visually compelling image, meant to motivate the “correct” type of devotion from the spectator.