HomeStoriesKicking the Ottomans out of Europe: The First Balkan War

Kicking the Ottomans out of Europe: The First Balkan War

In 1912, several nations in the Balkans banded together to remove the Ottoman Empire in the oft-forgotten First Balkan War, a mere year before the outbreak of World War I. 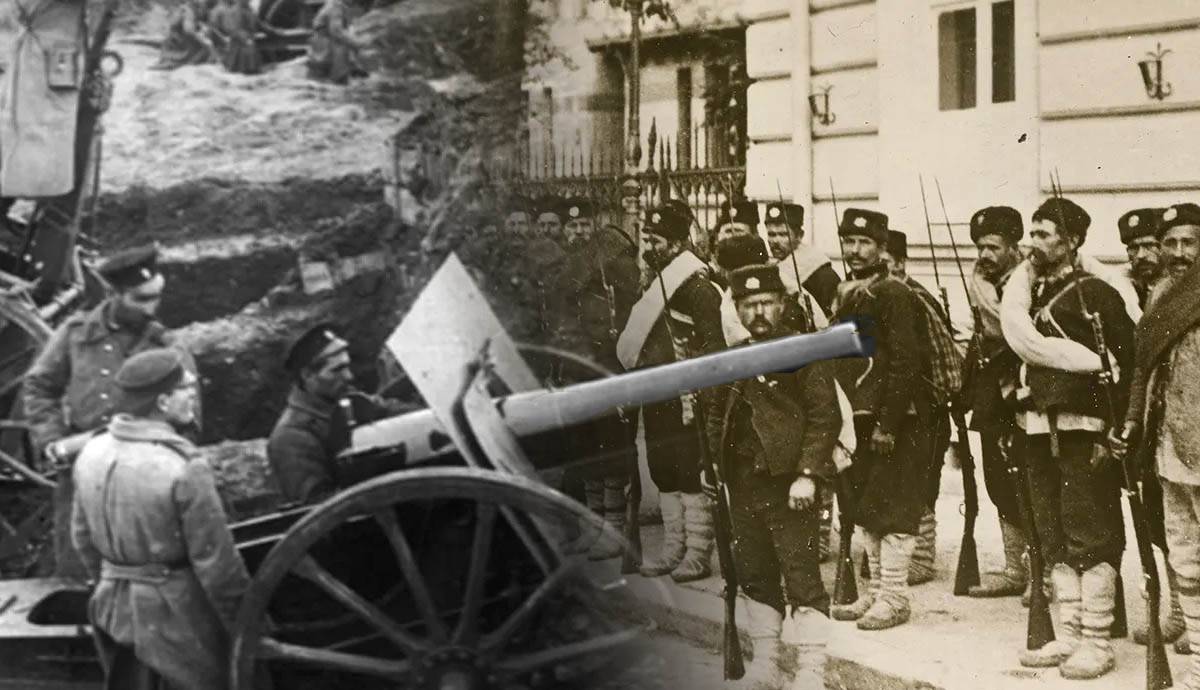 The Ottoman Empire was a massive multi-ethnic powerhouse that lasted for just over six hundred years. At its peak, the empire encompassed territories across the Mediterranean, Adriatic, and Red Seas and even reached out to the Persian Gulf across modern-day Iraq. The Balkans had long since been a point of contention for numerous powers. It was a mixing pot of Christian and Muslim populations and had long since been considered by many as a distinctly European sphere of influence, despite being ruled over by the Ottomans to varying degrees for centuries.

Little by little, the weakening Ottoman Empire’s influence was chipped away in the region as Balkan states and ethnic populations became independent over the 19th and early 20th centuries. This would culminate in the First Balkan War, where many of these states would band together and, in the wake of the Young Turk Revolution, eject the Ottoman Empire from its European holdings a mere year before World War I, the war that would spell an end for the empire in its entirety.

The Balkans and south-eastern European territories had long been in contention due to their varied ethnic populations and Christian majority living under the Muslim Ottoman Empire. However, only in the mid 19th century did the region become a more active flashpoint as Ottoman power grew weaker and weaker. For centuries, the Ottoman Empire had been seen as in decline and was often labeled as “The sick man of Europe.” Because of this, the empire found itself set upon by external powers looking to grow their own sphere of influence and by internal groups wishing for self-determination.

The actions of two groups, the Balkan states and, ironically, the Ottoman Empire’s own population, ultimately pushed the region into war. A number of Balkan states would gain either full sovereignty or autonomy in the region through a series of uprisings known as the “Great Eastern Crisis” of 1875-1878, in which a number of regions rebelled and, with Russian help, forced the Ottomans to recognize the independence of many of these countries. The only reason Ottoman rule at the time hadn’t been damaged even further was as a result of the intervention of the other great powers, who ensured the status quo remained mostly unchanged.

As a result, the Balkans found themselves to be a new hotbed of not just independent nations with their own nationalist interests but of still Ottoman-held territories that saw that their own independence was an entirely achievable goal. Additionally, there was a rising movement within the Ottoman Empire itself, known as the Young Turks. In 1876, Sultan Abdul Hamid II had been convinced to allow the Ottoman Empire to transition to a constitutional monarchy, though this was quickly reversed with the Great Eastern Crisis. Abdul promptly shifted back to a brutal, authoritarian rule instead.

Despite their name, the Young Turks of the early 1900s had little in common with the later movement, being a mix of ethnicity and religions, all united in their desire to see the rule of the Sultan brought to an end. Thanks to the Young Turk Revolution, Sultan Abdul Hamid II was finally removed from power, though not without cost. Almost immediately after the revolution, the Young Turk movement split into two factions: one liberal and decentralized, the other fiercely nationalist and far-right wing.

This resulted in a precarious situation for the Ottoman military. Prior to the revolution, the Sultan had forbidden large-scale military training operations or war games for fear of a coup from his armed forces. With the authoritarian ruler out of the way, the officer corps found itself divided and politicized. Not only did the study of politics and idealism for the two factions within the Young Turk movement take priority over actual military training, but the division caused Ottoman officers to often be at odds with their own fellow soldiers, making leading the army difficult. This revolution had left the Empire in a dangerous state, and the people of the Balkans could see this.

With the Ottoman Empire facing internal difficulties and an ever-weaker appearance, the nations of the Balkans and wider Europe started to prepare for the event of war. While to many, it appears as though the outbreak of World War I was a near-simultaneous or accidental event, a look at the First Balkan War suggests that not only was the First World War’s start unsurprising but that it had actually been years in the making.

Russia and the Austro-Hungarian Empire had both wished to expand their influence and, more importantly, their territory into the Balkans for some time. Since the Crimean War had shown that Europe would not take any upset in the status quo lightly, it was difficult to engage in direct conflict with the other empires. As a result, the numerous newly independent or autonomous nations rising out of former Ottoman territories in south-east Europe provided a perfect opportunity for the great powers of Europe to engage in proxy wars and back-room jockeying to help secure their territorial ambitions.

Russia was quick to influence several Balkan states, most notably Serbia and Bulgaria, while Germany secretly supported Bulgaria as a regional power to hold Russia in check. Austria-Hungary, for its part, was ready to go to war in order to prevent their enemy, Serbia, viewed as a Russian puppet, from gaining more land.

With Russia as a direct instigator and Austria-Hungary unwilling to intervene without German assistance, little was stopping the progress of war in the Balkans. France wished for no part in the conflict at all, promising their ally, Russia, that any war started in the Balkans would be fought without their help. England was likewise of little use, publicly supporting the integrity of the Ottoman Empire while behind closed doors encouraging Greece’s inclusion in the Balkan League and prompting the Bulgarians to keep Ottoman territories for themselves instead of handing them over to Russia.

With little opposition from abroad in the way, the newly formed Balkan League members comprising Bulgaria, Greece, Serbia, and Montenegro agreed to a number of treaties among themselves for how annexed Ottoman territories would be split. With Albania launching a rebellion in 1912, the Balkan League felt this was their opportunity to strike and issued an ultimatum to the Ottomans before declaring war.

The Ottomans were completely unprepared for war. While it seemed clear that war was coming, the Ottomans had only recently begun mobilization. The military was completely untrained and unprepared for large-scale troop movements due to the ban on war games during the previous authoritarian regime, which did not help things. Christians in the Empire were considered unfit for conscription. Considering that the vast majority of their European population was Christian, this meant that soldiers had to be brought in from elsewhere, something which the rather poor infrastructure in the Ottoman Empire made even more difficult.

Perhaps the worst issue preventing the massing of troops into the Balkans was the fact that for the past year, the Ottomans had been waging war with Italy in Libya and off the western coast of Anatolia in the Italo-Turkish War. Because of this conflict and Italian naval dominance, the Ottomans could not reinforce their European holdings by sea. As a result, when the Ottomans declared war, there were only some 580,000 soldiers, often poorly trained and equipped, in Europe facing off against 912,000 soldiers in the Balkan League, including the well-equipped and well-trained Bulgarian army, who made up the single largest contribution of manpower from the League.

The final nail in the coffin for the Ottoman forces in Europe was the seemingly constant issue of poor intelligence regarding troop deployments and movements by a number of the League’s armies. On both the Greek and Bulgarian fronts, this misinformation proved disastrous as Ottoman forces would completely underestimate the available pool of troops. This, mixed with chronic logistical issues and a massive imbalance in both manpower and experience, meant that there was little practical hope for the Ottomans in the opening stages of the war. The League forces advanced across every frontline, cutting deep into Ottoman territory, with the Bulgarians even reaching the Aegean Sea.

The Bulgarian forces would ultimately push right up to the Ottoman defensive line at the city of Çatalca, a mere 55 kilometers from the heart of Istanbul. Although the Ottomans did possess a larger navy than the Greeks, who formed the entirety of the League’s naval component, they initially focused their warships in the Black Sea against Bulgaria, losing the initiative, several strong-holds, and islands in the Aegean Sea to the Greeks, who then proceeded to blockade Ottoman reinforcements from Asia, forcing them to either wait in place or attempt the slow and difficult journey overland through poorly maintained infrastructure.

The End of the First Balkan War & the Balkan League

With their forces in Europe smashed and reinforcements slow to arrive, the Ottomans were eager for a treaty to take the pressure off of Istanbul. Likewise, the Balkan League was aware that sooner or later, Ottoman reinforcements would arrive, and worse still, cracks were starting to form in the alliance. On the eastern front, the Bulgarians had besieged the fortress of Adrianople at Edirne but lacked the required siege weapons to break the fort, which was seen as essential for a rapid advance in the east.

The Serbians sent a detachment of soldiers with heavy siege cannons to assist in taking the fort, which was unquestionably in the territory Bulgaria aimed to claim. Despite the Serbians’ essential assistance, Bulgarian officials purposely omitted and censored any mention of Serbian involvement during the siege. What’s more, Bulgaria had allegedly promised some 100,000 soldiers to assist Serbia in their push along the Vardar River, which were never provided.

The final straw came during the peace process in London, where the Great Powers forced the Serbians and Greeks to remove their troops from the west and establish an independent Albania. Meanwhile, Bulgaria had seen fit to stab their allies in the back and remove all support that either of their allies had to any territories in the west while still demanding the territories in modern-day North Macedonia that the Serbians had fought for.

Understandably, with the loss of all hoped-for territories in the west due to the meddling of the Great Powers, Serbia and Greece were unwilling to give up the remainder of the region they’d fought for to the Bulgarians, who had already threatened to go to war with their former allies. Instead, the Serbians and the Greeks would ally in secret before the treaty had even been signed, setting the stage for the Second Balkan War less than a month later.