Frank Stella is one of America's most celebrated and prolific artists. Throughout his career, he has explored various artistic styles and techniques that have defined fundamental art movements. 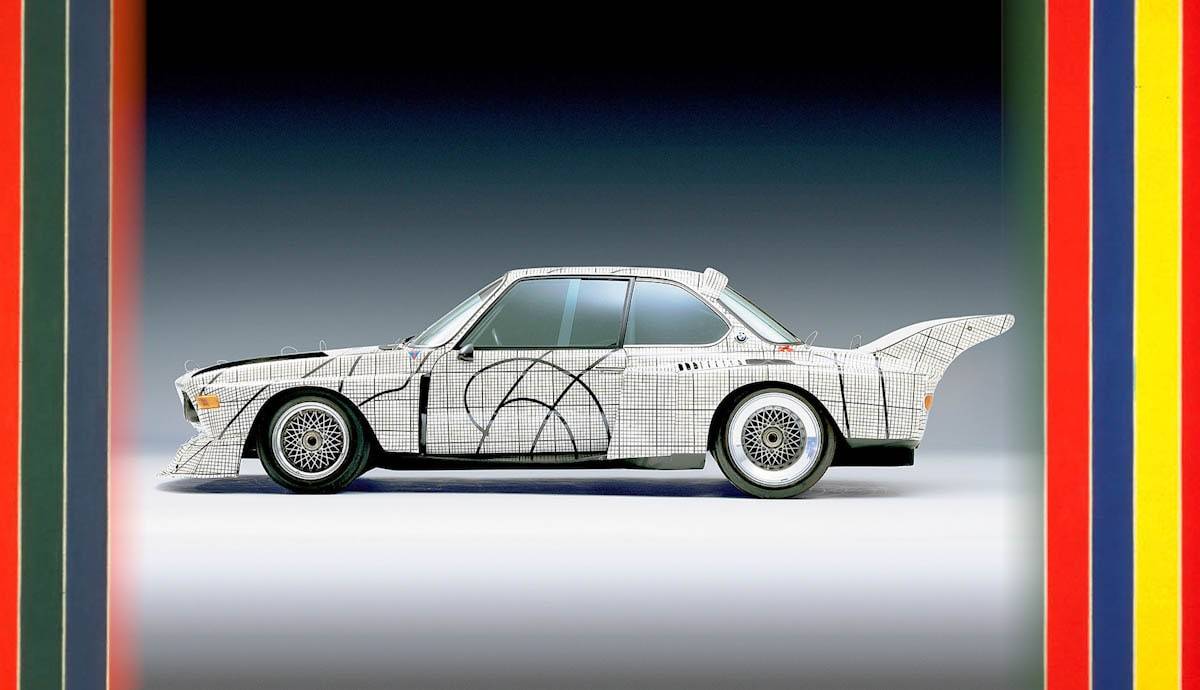 Frank Stella is one of the most important American painters of all time, with an impressively long and varied career. He first embraced minimalism, using a monochromatic color palette and abstract geometric designs. Soon after, he began experimenting with a variety of different artistic styles. Stella then moved away from Minimalism and into his own brand of Abstract Expressionism. He developed his own unique style, which over the years became more complex and flamboyant. From geometric forms and simple lines to vibrant colors, curved forms, and 3-D designs, Frank Stella has created revolutionary and groundbreaking art.

10) Frank Stella Was Born in the Town of Malden

Frank Stella, born on May 12, 1936, is an American painter, sculptor, and printmaker who is often associated with the colorful side of minimalism. He grew up in Malden, Massachusetts where he showed great artistic promise at a young age. As a young man he studied at  Princeton University, where he graduated with a degree in history. In 1958, Stella moved to New York City and developed an interest in Abstract Expressionism, exploring the works of  Jackson Pollock, Jasper Johns, and Hans Hoffman.

Stella found particular inspiration in the works of Pollock, whose status as one of the most influential American painters continues to this day. After moving to New York, Frank Stella soon realized his true calling: to be an abstract painter.  Franz Kline and Willem de Kooning, along with the artists of the New York School and Stella’s teachers at Princeton, all had a profound impact on his development as an artist. As a way of earning money, Stella started working as a house painter, a trade he had learned from his father.

In 1959, Frank Stella participated in the seminal exhibition 16 American Artists at the Museum of Modern Art in New York. It was Stella’s first appearance in the New York art scene. Stella completely transformed the art world in America when he first showed his series of monochromatic pinstriped paintings called The Black Paintings. This might seem like a simple concept today yet it was very radical back then. The straight, hard edges in these paintings were his hallmark and Stella became known as a hard-edge painter. Stella created these meticulous canvases by hand, using pencils to sketch out his patterns and then applying enamel paint with a house painter’s brush.

The elements he used seem quite simple. Black parallel lines were arranged in a very deliberate manner. He called these stripes a “regulated pattern” that forced “illusionistic space out of the painting at a constant rate.” Precisely delineated black stripes are intended to emphasize the flatness of the canvas and force the audience to realize and acknowledge the canvas as a flat, painted surface.

8) Stella was Associated with Minimalism

At the beginning of his career, Frank Stella painted in the style of Minimalism, combining solid colors and geometrical shapes on simple canvases. Minimalism was an avant-garde art movement that emerged in the United States and featured sculptors and painters who avoided overt symbolism and emotional content. The term Minimalism was originally coined in the late 1950s to describe the abstract visions of artists like Stella and Carl Andre. These artists called attention to the material of the work.

Frank Stella pushed the boundaries of post-war modern art and abstraction. His painting’s surfaces have changed a lot over the years. The flat paintings gave way to giant collages. They turned into sculpture and then headed in the direction of architecture. Throughout the years, Frank Stella experimented with various color palettes, canvases, and mediums. He moved from Minimalism to Maximalism, adopting new techniques and using bold colors, shapes, and curving forms.

7) He Mastered Printmaking in the Late 1960s

As we can see, Frank Stella had an individual and instantly recognizable style, but it changed periodically throughout his career. In 1967, he began making prints with the master printmaker Kenneth Tyler, and they would collaborate together for over 30 years. Through his work with Tyler, Stella’s iconic ‘Black Paintings’ of the late 1950s gave way to maximalist colorful prints in the early sixties. Over the years, Stella has created more than three hundred prints that incorporated various techniques, such as lithography, woodblocks, screenprinting, and etching.

Stella’s Had Gadya series is an excellent example of his abstract prints completed in 1985. In this series of twelve prints, the American painter combined different techniques including hand coloring, lithography, linoleum block, and silkscreen, creating unique prints and designs. What makes these prints unique are the abstract forms, the interlocking geometric shapes, the vibrant palette, and the curvilinear gestures, all of which represent Frank Stella’s style.

In 1970 Frank Stella had a career retrospective at the Museum of Modern Art in New York. This exhibition revealed extraordinary works consisting of 41 paintings and 19 drawings, including minimalistic designs as well as bold colored prints. Stella also produced irregularly shaped canvases such as polygons and half-circles. His works featured many repetitive two-dimensional lines which created a pattern and a sense of rhythm. The geometric shapes in his works were defined by or composed of these lines.

During the late 1970s, Stella’s started focusing on three-dimensional works. The American painter began creating larger sculptures made from materials like aluminum and fiberglass. He subverted the traditional definitions of painting and created a new form that was a hybrid between painting and sculpture.

The idea for these sculptures emerged in 1983. Frank Stella was inspired by the circular smoke that Cuban cigarettes formed. He became fascinated with the idea of turning smoke rings into art. The artist managed to create pieces with the most difficult material: tobacco. He built a small box that can immobilize tobacco smoke, eliminating the cyclically-shaped smoke pattern. Stella’s ‘Smoke Rings’ are free-floating, three-dimensional, and made out of sleek painted fiberglass or aluminum tubing. One of his most recent works from this series was created in 2017. It features white billowing forms of smoke rings that form a large sculpture.

As early as the 1980s, Frank Stella was already using computers to model his designs. Today, he’s known for using not only computer-aided design softwares but also rapid prototyping and 3-D printing. In a sense, Stella is an old master working with new technologies to create amazing pieces of art. His abstract sculptures are digitally designed and printed through a process called Rapid Prototyping.

Stella employs 3-D printing technologies to create these artworks. First, he begins by creating a form that is scanned and manipulated on the computer before it goes to print. The resulting sculpture is often colored with automotive paint. The American painter blurs the boundaries between painting and sculpture by creating two-dimensional forms shaped and stained in three-dimensional space.

In 1997, Frank Stella was invited to create a three-part mural painting for the University of Houston’s Moore School of Music. The great American painter exceeded all expectations with his large-scale public art masterpiece that covered more than six thousand square feet. Stella’s piece is called Euphonia. It decorates the entrance wall and ceiling and is so big that it can be seen and enjoyed by all the students and patrons of the Moores Opera House.

Euphonia is a colorful collage filled with abstract imagery and intricate patterns, giving a sense of openness, movement, and rhythm. Frank Stella had to establish a studio in Houston to complete this enormous artwork and it remains the largest piece of art on this campus. Stella also worked with a team of artists on this installation, including students from the University of Houston.

2) The American Painter Turned a BMW into an Artwork

In 1976, Frank Stella was commissioned by BMW to design an art car for the 24-hour race at Le Mans. The American painter didn’t even have a driving license back in 1976. However, he approached the project with great passion. For his design on the BMW 3.0 CSL coupé, the American painter was inspired by the geometric shape of the car and created a black and white square grid, reminiscent of technical graph paper. He superposed millimeter paper on the 1: 5 model to create a 3D technical drawing. The grid pattern, the dotted lines, and the abstract lines added a three-dimensional feeling to the design of this art car. Stella showcased not only the beauty of the car but the excellent craftsmanship of engineers.

In Frank Stella’s works, one motif continuously makes an appearance: the star. And funnily enough, his last name means star in Italian. During his twenties, Stella experimented for the first time with the star form. However, in his early career Stella didn’t want to become known as the artist who only creates star-like artworks due to his name, so he moved beyond this motif for many years.

Decades later, Stella decided to explore the possibilities of creating star forms with new technologies and 3-D printing. His most recent, signature star works vary in shapes, colors, and materials. They range from two-dimensional minimal works of the 1960s to the latest 3-D sculptures and are made of nylon, thermoplastic, steel, or aluminum.  Over the last few years, star-shaped artworks in a vast array of forms have been a dominant area of interest for this great American artist, demonstrating the scope and ambition of his incredible career.