Georges Bataille often explores contradiction and impossibility. In his Summa Atheologica, he attempts to reconceive religion and mysticism. 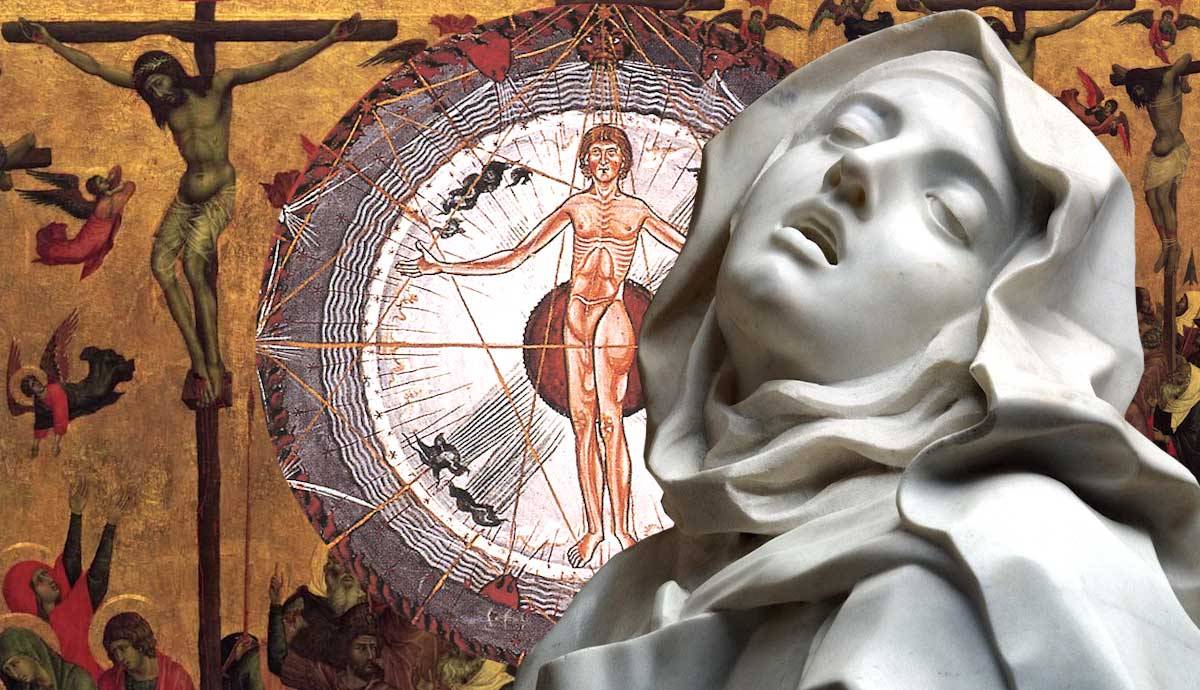 Although Georges Bataille is not frequently considered a systematic philosopher, and for good reason, there are some strands and structures which tie his works together with one another and draw together apparently disparate themes. Bataille tends to write in binaries, pairs of opposites (or apparent opposites) that mirror one another.

It is these pairs which lend an almost systematic quality to Bataille’s philosophy – through The Accursed Share, Erotism, and the works composing the Summa Atheologica, Bataille seems to collect his various subjects of interest into two opposed categories. Since it never quite seems as if any one binary is the most important to Bataille, it is hard to pick a single name for each of these clusters of ideas, but it is perhaps simplest to call them ‘Sacred’ and ‘Profane’.

The reason Bataille’s philosophy is only ever almost systematic is that while some of the binary pairs he thinks about seem to stand fast, each part of the pair remaining perfectly distinct from its opposite, there are other pairs in which the two parts appear to fuse together, switch places, or flicker in and out of one another.

The sacred is, loosely speaking, the realm of things that approach the impossible. It consists of extremity, rapture, and experiences that strain at the boundaries of human consciousness, even momentarily stretching beyond them. Inner Experience ties this world of near-impossible experiences to the mystical tradition: the accounts of religious experiences that defy ordinary categorization and description – that evade assimilation into the profane world of the everyday (Bataille places particular emphasis on the writings of Pseudo-Dionysius the Areopagite).

For Bataille, the mystical experience aspires towards an impossible state: identification with ‘everything’. For the Christian mystic this ‘everything’ is God, but the aspiration is impossible, Bataille writes: ‘We have in fact only two certainties in this world-that we are not everything and that we will die.’ (Inner Experience, 1943)

Here, however, a characteristic twisting together of opposites occurs. Though Bataille links this impossible continuity with the ‘entirety of being’ to the sacred, he describes another kind of mystical experience that results when we recognize the impossibility of our desire for continuity at the same time as we acknowledge our mortality. This experience diverges the mystical tradition, which Bataille begins Inner Experience by critiquing, in that it is not ‘confessional’: it does not lay claim to being an experience of something, or of God, but rather to pure experience, alive, where the sentence ‘I saw God’ is deadening.

It is this condition that Inner Experience dedicates itself to communicating and inducing. Once we have reckoned with these two facts, without the crutch (or ‘narcotic’) of religion to undermine one or the other, Bataille writes:

“From that moment begins a singular experience. The mind moves in a strange world where anguish and ecstasy coexist. Such an experience is not beyond expression; I communicate it to whoever is unaware of it. Its tradition is difficult; the introduction of its oral form is really only barely written.”
Inner Experience, 1943

The resultant experience, that which attends the realization the impossibility of continuity with all the world, is discontinuous (that is, personal, or ‘inner’), but is nonetheless communicable. The experience of necessary discontinuity tends, paradoxically, back towards continuity, in its state of simultaneous extremes: despair and rapture.

The titles Bataille gave to his three works are appropriate to the paradoxical (or ‘impossible’) structure of his thought: Inner Experience (1943), Guilty (1944), and On Nietzsche (1945) – the Summa Atheologica (La Somme athéologique). The relation of these three texts to religion remain ambivalent throughout, and the apparent opposition between their title’s referent (Thomas Aquinas’s Summa Theologica [1485]) and their atheism never resolves itself into a straightforward distinction.

Bataille is both dismissive of and fascinated by religion. He frequently treats Christian dogma as laughable and pernicious, while returning compulsively to depictions of religious ecstasy, mystical tracts, and the ritualized sacrifices common to both modern and ancient religions.

Bataille shares with Nietzsche this decidedly theological approach to atheism, which is at least as concerned with the generation of new rituals and deities as with the dismissal of old ones. Religion is, after all, counted among Bataille’s principle modes of ecstatic expenditure. Bataille describes its proximity to death and eros; its capacity to produce moments of bliss approaching the impossible, and to make believers forget their profane, quotidian lives of material accumulation. Religion, therefore, is an object of contradictions, dual impulses straining in opposite directions.

Bataille explores this duality most explicitly in Inner Experience, where he describes religion (speaking most obviously here about Christianity) as containing drives towards both expenditure and recuperation: mystical bliss and eternal postponement. Just like Nietzsche, Bataille declares the death of God, but here as the completion of a more radical sacred project.

For Bataille, the death of Christ is only a partial sacrifice, insofar as God survives and recuperates the demise of Christ’s body. This recuperation, for Bataille, is essentially profane in character, and thwarts the sacred expenditure of the sacrifice proper. The immortality of God, and Christ’s resurrection, exemplifies for Bataille the underlying profanity of Christianity (and religion at large): its reliance on the crutch of postponement and recuperation in heaven – it sullies the ecstatic expenditure of the sacrifice by expecting to get something back.

The Role of Sacrifice

Although an avowed atheist, Bataille engages with religion and theology in ways which go beyond the strands of mysticism described above. The use of ‘sacred’ and ‘profane’ in his philosophy, while not always in reference to things conventionally collected under these categories (excrement and sex alike are, for Bataille, quintessentially sacred), is not an arbitrary linguistic choice either. Indeed, Bataille spends much time in The Accursed Share and Erotism laying out the ways in which religious rituals and practices participate in the expenditure and extremity that, for him, constitutes the sacred.

In particular, and this is a motif that recurs in almost every work Bataille ever wrote, Bataille saw the sacrifice in its various forms as the most exemplary sacred thing: an event mingling death, eros, spectacular waste, and bridging the gulf between the private selves of its spectators. Where profane life cannot tolerate the logic of the sacrifice, preferring to always invest resources and life profitably, to postpone consumption in favour of productive growth, the sacrifice expends life, food, and precious resources unproductively, now.

Bataille identifies consciousness with discontinuity. By inhabiting one’s own conscious mind, one is cut off from other minds: the precise conditions of life are those of discontinuity with others. Conscious human life is defined by the boundaries that separate self from other. Before and after life, however, continuity reigns. Both before birth and at the moment of death, these boundaries dissolve.

Chief among these, the sacrifice allows a moment of nearness to the continuity of death, without having to undergo its irremediable operation. For the sacrificed person or object, meanwhile, the sacrifice is an elevation to the domain of sacred things.

Bataille writes at length in The Accursed Share about the structure and purpose of Aztec sacrifices, dedicating an entire chapter to this phenomenon. He identifies the purpose of the Aztec sacrifice as being one of restoration: the sacrifice renders sacred again something or someone that has been made profane – has slipped into the logic of utility, production, and function. Thus, the sacrifice of slaves was deemed a restoration of the human to the world of sacred things, where the living being had been transformed into a tool of production.

Bataille gave the name ‘Acéphale’ to two separate enterprises, operating at roughly the same time, in the late 1930s. The first of these was a journal, published 1936-39 in four issues, with contributors including Pierre Klossowski and Georges Ambrosino. André Masson’s cover for the journal betrays Bataille’s obsession with the sacrifice: the headless figure clutches a burning heart in its right hand. The second enterprise, however, demonstrates the depths of Bataille’s interest in the sacred significance of human sacrifice.

This Acéphale, a secret society to which Bataille invited members from surrealist and broader intellectual circles, remains largely opaque to scholarship. No member or participant in the society’s rites has ever published an account of proceedings at Acéphale’s meetings, and Bataille went to great lengths to avoid external observation.

The most concrete suggestion of the society’s intentions comes from literary critic Roger Caillois’s account of refusing to participate in its rituals. He suggests that the intention of the society was to carry out a human sacrifice, for which ‘the (willing) victim was found, only the executioner was lacking.’ (Caillois, quoted in J.-P. Le Bouler, Bataille et Caillois, divergences et complicités)

We do not know who the willing victim was, if Caillois’s story is true, and there is no evidence that such a sacrifice was ever carried out (both Acéphales disappeared with the start of the war). In any case, the project exemplifies Bataille’s yearning for the impossible: whether for the ecstatic communality of spectatorship, or for the vast continuity of death.

Gory Offerings to the Gods: Human Sacrifice Throughout History