HomeArtHelen Frankenthaler In The Landscape of American Abstraction

Helen Frankenthaler was an American Abstract painter. Typically identified as a Color Field painter, she drew on influences from across mid-century abstraction throughout her career. 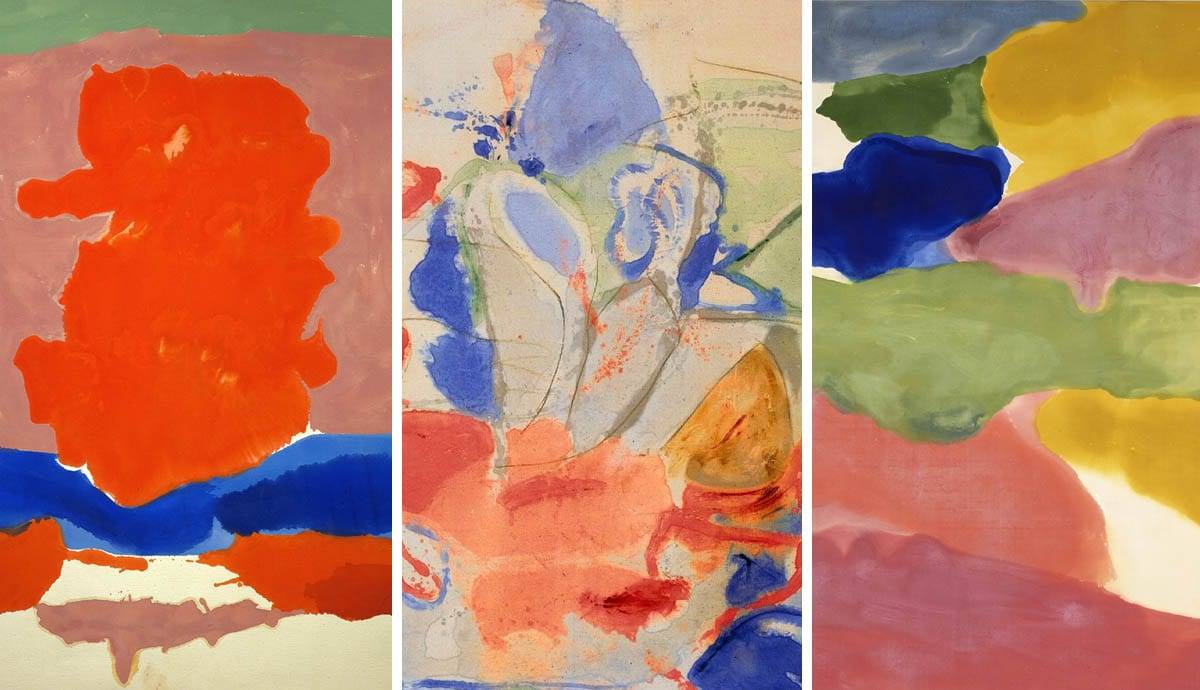 Though Helen Frankenthaler is known best for her pioneering “soak-stain” technique, her body of work spans a formidable range of styles and techniques, including color field painting. She seems to have pulled, at some point, from all across the landscape of mid-century abstraction in America. She never strays, however, from her own distinct vision of peak Modernism, Frankenthaler’s body of work, considered in its entirety, reveals that she was always searching.

Under the umbrella of Abstract Expressionism, there are two general sub-genres: Action painting and Color Field painting. Though she is often considered a Color Field painter, Frankenthaler’s early paintings strongly exhibit the influence of Action painting (e.g Franz Kline, Willem de Kooning, Jackson Pollock), which is typified by vigorous brushwork or other messy applications of paint, apparently guided largely by feeling. In particular, many of the Action painters were distinguished by their use of thick paint.

As her style matured, Helen Frankenthaler would tend more towards a Color Field (e.g. Mark Rothko, Barnett Newman, Clyfford Still) sensibility. This mature, Color Field work is what canonized Frankenthaler, securing her place as a fixture of American art. Over the course of Frankenthaler’s career, however, the stylistic influence of Action painting simmers just beneath the surface and reemerges on the canvases of her late period.

Helen Frankenthaler’s most recognized contribution to painting is the “soak-stain” technique, whereby thinned paint is applied to unprimed canvas, resulting in the organic, flowing fields of color which define her mature work. Initially, Helen Frankenthaler used oil paint cut with turpentine. In her first “soak-stain” work, Mountains and Sea of 1952, she seems already to deal with the tension between Color Field and Action painting.

Though Frankenthaler’s use of the “soak-stain” technique tracks with her tendency towards Color Field painting, the influence of Action painting is expressed in this method itself: The “soak-stain” technique certainly seems to draw from Jackson Pollock’s method of dripping paint onto a canvas laid flat on the ground. Further, some of Frankenthaler’s first experiments with the technique involve linear forms and streaks of paint, crisscrossing much in the manner of Pollock. Helen Frankenthaler was, in fact, a great admirer of Pollock, and his influence, as well as that of other such Action painters, is likely responsible for the gestural linework in Frankenthaler’s early painting.

Before she came to the “soak-stain” technique, Helen Frankenthaler’s paintings had an even more obvious, Action painting style. The mark-making in Painted on 51st Street is reminiscent of Arshile Gorky’s most abstract pieces, or Pollock’s early work. The heavy, textured surface and her mixture of oil paint with other materials (sand, plaster of Paris, coffee grounds) recall de Kooning. With the “soak-stain” technique, Frankenthaler moved away from this wild, intuitive style of painting and biased increasingly towards steady, ponderous planes of color, placing her in the proximity of Color Field painting. Of course, much of this can be attributed to Helen Frankenthaler developing artistically and finding her voice. There is, however, also a technical reason that may have contributed to this development.

The “soak-stain” technique would remain foundational to Helen Frankenthaler for the rest of her career. However, she found early on that the technique was not without issue and would require revision. Frankenthaler’s stained oil paintings are non-archival because oil paint erodes unprimed canvas. In many of her early oil paintings, these signs of decay are already evident. This technical issue caused Frankenthaler to switch mediums.

In the 1950s, acrylic paints became commercially available, and by the early 1960s, Frankenthaler had abandoned oils in favor of this new paint. Acrylic paints can be applied to an unprimed canvas without any of the damaging effects of oil paints, and so they became Frankenthaler’s default. Beyond resolving the issue of longevity, the acrylics coincided with a change of aesthetics in Helen Frankenthaler’s work

The new acrylic paints, when thinned to a pourable consistency, did not run in the unprimed canvas as much as the oil colors. Because of this, Frankenthaler was able to create tighter, cleaner edges to the fields and forms in her acrylic paintings. As she makes the switch from oil to acrylic, Helen Frankenthaler’s colorful shapes begin to appear much more defined and assertive. Compare the sharp, focused edges on the nested color fields in Small’s Paradise to the all-over blurriness of Europa. The nature of acrylic paints expedited Frankenthaler’s development in this regard. Indeed, the stylistic tendencies of her early work versus her mature paintings owe, in part, to the differences between oil and acrylic paint.

On a more theoretical note, Frankenthaler’s technique represented an important step for the project of Modernism at large. A theme of Modernism is the tension between the inherent flatness of the canvas and the illusion of depth in painting. Jaques-Louis David’s Oath of the Horatii is sometimes considered the first modernist painting because of how it compresses space, with the entire narrative of the painting pushed into the foreground. The picture plane was collapsed with subsequent, increasingly abstract movements which readily acknowledged the reality of their flatness.

By the time of post-war abstraction, the only depth that remained was either the literal physicality of the paint and canvas or the slight suggestion of space that occurs whenever colors or tones are placed next to each other. Mark Rothko tried to circumvent any awareness of his work’s dimensionality by using sponges to apply extremely thin layers of paint to his canvases. Frankenthaler’s Mountains and Sea represents, perhaps, the realization of a truly flat painting, nearly two hundred years after David painted Oath of the Horatii.

With her “soak-stain” technique, the painting was flattened entirely by merging the paint and canvas – soaking one into the other to create an entirely undifferentiated surface quality. By this action, she would have seemed to have arrived at the conclusion of this pursuit: flattening the picture plane. Frankenthaler, however, would not come to rest here, at the end of this particular, Modernist concern.

The fully stained paintings of the 50s and 60s are iconic in Frankenthaler’s oeuvre, but they do not represent the conclusion of her painterly pursuits. In Frankenthaler’s late paintings, an interest in texture reemerges. Having abandoned textural variety in painting since the days she stopped priming her canvas, Frankenthaler began again, in the 1980s, to paint with the body. Works like Grey Fireworks feature thick dabs of paint spread across a familiarly watery-thin backdrop. These marks appear strategic in their placement, more calculated than her earlier paintings. She is employing the aesthetic signs of Action painting with these thick, random-seeming dollops of paint. The application, however, is too sparring and clever to seem emotional. In these late paintings, Frankenthaler engages traditions of both Color Field and Action painting, literally layered over one another in a composite of American abstraction.

Towards the end of her life, in the 90s and 00s, many of Frankenthaler’s paintings feature the all-over, thick, icing-like paint that she had foregone since the early 50s. In Barometer, for example, a thick layer of white paint swirls over the top half of the canvas, dominating the picture. Again, the application feels careful and measured in the sense of her mature, stained paintings.

Helen Frankenthaler and Abstraction in its Entirety

Frankenthaler’s painting has mixed the inclinations and stylistic markings of various styles under the umbrella of abstract modernism. There are Action painting and Color Field painting at play in her work. Sometimes she channels the energy of Pollock or lives in the roiling surface of a canvas encrusted with paint. At other times, her vast expanses of color engulf the viewer, sometimes in the same totalizing solemnity as Rothko. Throughout, she remains endlessly inventive in her compositions, constantly in dialogue with her material, letting it guide her. Frankenthaler paints with the heartfelt earnestness of the first Abstract Expressionists at certain times, and the knowing, the coyness of the second generation at others. All the while, she never becomes derivative, always maintaining her own clear vision and interests.

The range of influences in her painting has changed throughout the years, but it never ceases to look distinctly like Helen Frankenthaler’s own work. From her earliest, busiest, heaviest paintings, to the revelation of the soak-stain works, to her transformation with the acrylics, to the emergence of texture in her work, it all holds together under Frankenthaler. Though her name has become synonymous with the stained paintings from the middle of her career, Helen Frankenthaler’s work, considered as a whole, demonstrates her canniness with abstract painting in its entirety. In this sense, she encompasses American, post-war abstraction.