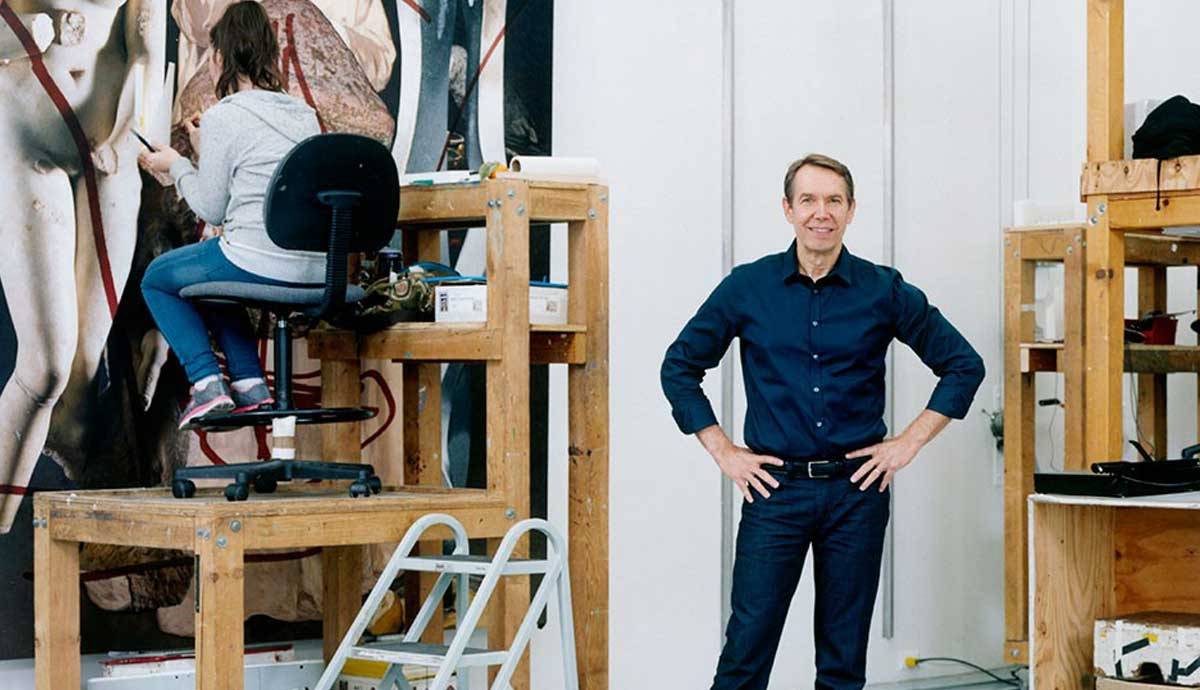 American artist Jeff Koons is world renowned for his gimmicky, kitsch Pop Art, which pushes the boundaries of good taste. His body of art is widely diverse, encompassing photography, sculpture, painting and installation. But since his early days as an artist, Koons has rarely made any of his final artworks. Instead, he comes up with the concept, and finds a way of outsourcing the final production of the artwork. He says, “I’m basically the idea person. I’m not physically involved in the production.”

Jeff Koons thereby questions notions of originality, and what it means to be an artist in an increasingly capitalized world, even if critics have accused him of producing art that is impersonal, or “sterile.” We look in more detail at some of the ways Koons has made art over the years, to create some of the best-known artworks of contemporary times.

1. Early in His Career, Jeff Koons Made Art from Found Objects

While Jeff Koons trained as an artist at the Maryland Institute College of Art in Baltimore, as a young graduate he took on several different jobs in sales, including work as a Wall Street broker. Koons discovered he had a real knack for selling commercial goods, and he became fascinated by our human desire to buy and consume.

In some of his earliest artworks during the 1980s Jeff Koons bought brand new consumer goods, such as basketballs and vacuum cleaners, displaying them in pristine rows in the gallery space as a commentary on our desire for the latest new trend. He illuminated the vacuum cleaners with fluorescent lighting to give these objects a quasi-spiritual quality, as if mocking how we idolize commercial items.

2. He Has Employed Experts for Specialist Projects

Towards the end of the 1980s Jeff Koons began having pre-existing objects or photographs remade in metal, porcelain, and other materials by highly skilled specialists. But it is worth noting that Koons has always worked in close collaboration with specialists, and has very particular ideas for how he wants the end product to look.

He has a very distinctive vision, which emerged during the 1980s and continues to this day, which involves scaling up pre-existing objects, and making them glossier and more over the top, so they become nightmarish and grotesque. These have ranged from kitsch animal ornaments to flowers, balloon dogs, and a life-size replica of Michael Jackson and his pet monkey Bubbles.

In his early years as an artist, Jeff Koons went to great expense having these objects meticulously created by artisans, saying, “I don’t have the necessary abilities, so I go to the top people.” In fact, the specialists Koons employed were so expensive that he nearly became bankrupt, and had to move back in with his parents.

After becoming an established artist, Jeff Koons went on to establish a busy workshop space in the Chelsea district of New York. Here he employs a team of over 100 highly skilled assistants who make his art for him. Koons modelled his workshop space on Andy Warhol’s famous Factory. Like Warhol, Jeff Koons produces multiples of the same artwork, such as his polished and painted metal Balloon Dogs, which have proved one of the artist’s most commercially successful ventures. Koons says, “I’ve always enjoyed having more of an idea and then having distance.”

4. Computers Are an Important Part of His Design Process

Jeff Koons often creates the designs for his artworks by using computer technology, building how he wants the work to look before handing these digital prototypes over to his studio assistants, or other specialists.

For example, when creating his photoreal Easyfun-Ethereal paintings, Koons created a series of computer collages from magazine excerpts and advertisements. He then handed these to his team of assistants, who scale them up onto huge canvases using a complex gridded system.