HomeArtKaikai Kiki & Murakami: Why Does This Group Matter?

Kaikai Kiki is a radical artist group from Japan, founded and run by the great Takashi Murakami. Let’s look at why it is so important today. 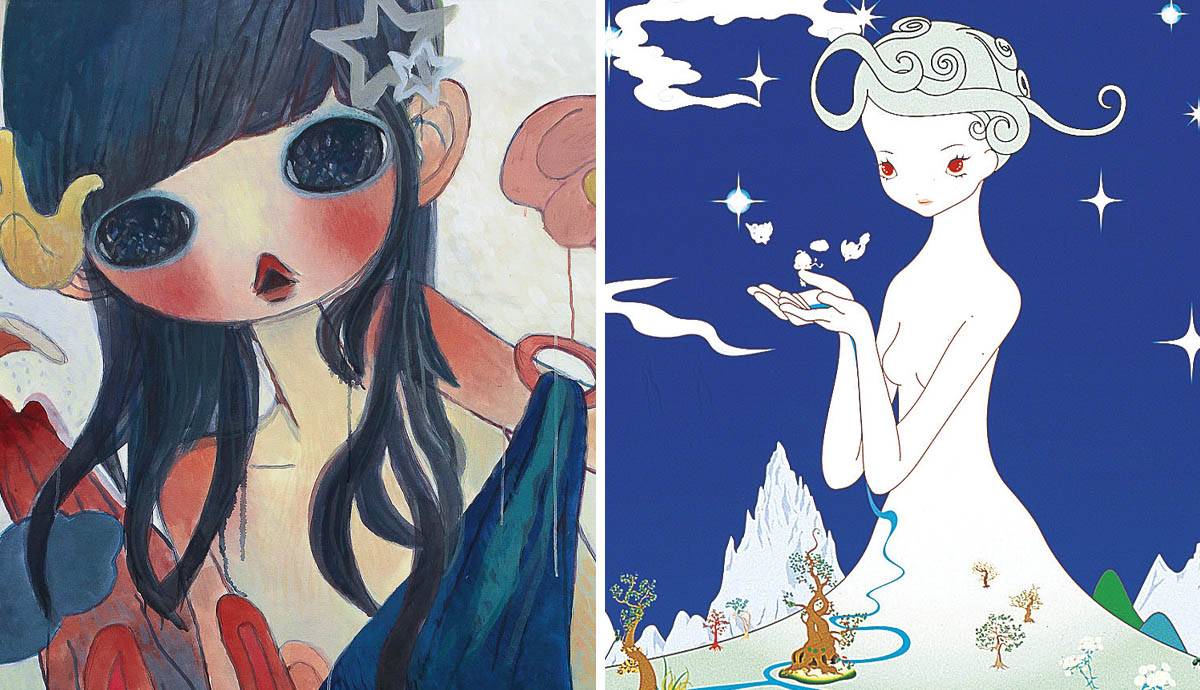 Kaikai Kiki is a ground-breaking artist collective run by Japanese artist Takashi Murakami. Founded in 2001 in Tokyo, its aim is to support and promote artworks by some of Japan’s most radical contemporary artists, with Murakami at the center. The group’s most successful members include Aya Takano, Chiho Aoshima, Seonna Hong, Mahomi Kunikata, and Kazumi Nakamura, all of whom are making waves across the international art world. While Kaikai Kiki began as a relatively small workshop space, it has grown exponentially in the past few decades. It now encompasses three large workshop and studio spaces spanning Tokyo, New York, and Los Angeles. Murakami has also created a patented brand for selling merchandise called Kaikai Kiki Co. Ltd., as well as a busy Kaikai Kiki gallery space in the heart of Tokyo.

The History of Kaikai Kiki and Its Founder Takashi Murakami

Takashi Murakami, the great master of Neo-Pop and the “superflat” style, is the founder of the Kaikai Kiki artist collective, and he remains at the helm of the group as it continues to expand in new directions. He founded the collective in Tokyo in 2001 as an extension of his own workshop space, the Hiropon Factory, which employed a large group of dedicated assistants. Instead of simply employing these artists to work for him, Murakami decided to turn the tables, encouraging and promoting their individual practices.

Murakami lifted the name “Kaikai Kiki” from a 16th-century passage of text describing paintings by Kano Eitoku, and its translation means “powerful and sensitive.” This meaning is important for Murakami, as it succinctly collapses two opposing forces into one, a quality that he feels is at the heart of Japanese art, past and present. These two yin-yang forces, both as important as one another, also describe how Murakami feels about the artists in the Kaikai Kiki collective, many of whom were once his dedicated and loyal assistants. So, with all that in mind, let’s look at the reasons why the Kaikai Kiki collective is so important today.

Collaboration is at the heart of Kaikai Kiki. From the outset, the group was founded by Murakami as a shared collective, with an emphasis on nurturing creative talent through the free-flowing interchange of ideas, techniques, and practices. Artists associated with the group show many overlaps between their ideas and those of Murakami. For example, both Aya Takano and Seonna Hong show the same appreciation for “superflat,” manga-style imagery as Murakami, while Mahomi Kunikata shares with Murakami a desire to replicate the languages of consumerism and commercialism in her art. The group’s Kaikai Kiki gallery space is another example of their collaborative spirit, as they regularly host and curate exhibitions of one another’s work, alongside the ideas of international artists of a like-minded nature from further afield.

Murakami has modeled Kaikai Kiki on Andy Warhol’s famous Pop Art “Factory” of the 1960s. Like Andy Warhol, Murakami explores how the creation of art can be seen as a commercial, factory-like process involving many makers, as opposed to the clichéd lonely artist slaving away in a dusty old studio. Murakami likens this model to that of a pop music record label that signs up individual artists and offers them support in commercialism and collaboration. Many artists in the group also make reference to Japanese popular culture in their art, from manga cartoons and anime styles to kawaii culture. We can see this, for example, in the art of Aya Takano, who creates elongated, cartoonish figures with large eyes in fantastical scenarios.

Various artists involved with Kaikai Kiki embrace the latest digital technologies and production methods in the creation of their art. This approach encourages the creation of art that is playful, spirited, and fun, and in touch with contemporary pop culture as it evolves and changes before our eyes. For example, Chiho Aoshima designs her artworks on Adobe Illustrator and prints them using chromogenic processes, making them entirely synthetic with an almost sci-fi futuristic quality. She is also able to replicate multiples of her work easily, chiming with Andy Warhol’s repetitious screen-prints from the 1960s.

The Group Connects To Japan’s Past

Although we might think of Kaikai Kiki as a cutting-edge, futuristic phenomenon, the group also connects back deeply into the heart of Japan’s past. Murakami made this clear when he named the collective after a review of a 16th-century work of art by Kano Eitoku (see introduction). But the entire model of Murakami’s workshop can also be compared with the ukiyo-e art of Japan’s past. From the 17th to the early 20th century, it was customary for Japanese ukiyo-e art to be made in a workshop run by one visionary leader, or master, with many younger followers who emulated and expanded upon this style. Murakami doesn’t entirely replicate this model, as each of the artists under his wing is very much focused on their individual practices rather than directly copying his methods. Still, we can see how he has taken this concept and adapted it in a new way for the future.

References to Japanese ukiyo-e art can be seen in the art of many Kaikai Kiki artists, tying their art in with the heritage of Japan’s past. Murakami himself sites ukiyo-e’s flattened, graphic style and bold colors as an important reference in his “superflat” style, while Kazumi Nakamura’s painterly canvases are as much a nod to the simplified contours and cropped compositions of ukiyo-e as they are a reference to western ideas about abstraction.

Kaikai Kiki Has an International Status

Since its foundation in 2001, Kaikai Kiki has expanded from Tokyo into busy, large workshop spaces in New York and Los Angeles. In the Tokyo studio where it all began is a gallery space established in 2008 for resident artists to exhibit alongside selected international talent. The many artists who have exhibited there include American painter Mark Grotjahn, German artist Friedrich Kunath, and French artist Jean-Marie Appriou. In New York, the Kaikai Kiki studio contains an office and workspace, but it is more exclusively dedicated to the preservation and conservation of Murakami’s own work. By contrast, the Los Angeles studio, set up in 2009, specializes in animation and has room for 30 artists to work alongside Murakami and his team. Murakami has called the Los Angeles studio “a great step in the evolution of Kaikai Kiki [which] gives me a closer proximity to the community of artists with whom I hope to collaborate.”

As well as encouraging work within these studios, Murakami does much to promote the work of his like-minded peers, curating art fairs and group exhibitions where their work can be showcased. Although his name is clearly at the center, Murakami is far from egotistical. Instead, his generous, egalitarian approach means that younger, up-and-coming artists can benefit hugely from the notoriety of his name. Many artists involved with Murakami’s venture have had their careers launched on the international stage thanks to his help with the distribution and sale of their work. One of the group’s most recent rising stars is the Japanese artist known simply as Ob, whose ethereal characters have large, soulful eyes and cartoonish designs. Their paintings famously appeared in the Japanese Netflix drama series Followers (2020).

Cheeky, gimmicky commercial appeal is part of Murakami’s selling point in all his creative endeavors, particularly Kaikai Kiki, and he really seems to relish the ways he can level the field between art and popular culture. As well as encouraging the artists associated with the group to take a commercialized approach to the production of their art, Murakami has done much to market the Kaikai Kiki name as a recognizable brand. On one hand, he has patented the group’s name as Kaikai Kiki Co. Ltd., making a playful nod towards similar company names.

Murakami also created the two fictional characters named Kaikai and Kiki out of the company name, who have effectively become group mascots. They are two alternative, Disneyesque cartoonish misfits styled in the manner of contemporary Japanese anime and manga, with large eyes and huge grins. These strangely cute characters frequently feature in Murakami’s art and have been reproduced in a range of commercial objects, including screenprints, soft toys, and figurines.

Kaikai Kiki: Looking to the Future

Looking forward, the Kaikai Kiki phenomenon continues to expand in unprecedented ways, branching out into adventurous projects, including art fairs, exhibitions, commercial product lines, and even animations. As the Kaikai Kiki studios grow and develop, more like-minded artists continue to join in with this fascinating artist collective, which looks more likely than ever to become recognized as a veritable art movement. What is perhaps most important and culturally relevant is the way Kaikai Kiki takes the age-old method of mentorship that dominated art history for centuries, particularly in Japan, and updates this notion for the 21st century. This model of learning from and being supported by a master who has the skills, connections, tools, and space to really make creativity come alive has launched the careers of so many artists, and it will continue to do so into the future. It sets a hopeful precedent for art management and production, not just in Japan but across the globe.