HomeStoriesLouis Comfort Tiffany: The Man Behind the Iconic Tiffany Lamps

Louis Comfort Tiffany: The Man Behind the Iconic Tiffany Lamps

When you picture the essence of American decorative arts, you might picture the intricate and opalescent stained glass of Tiffany lamps. Learn more about Louis Comfort Tiffany! 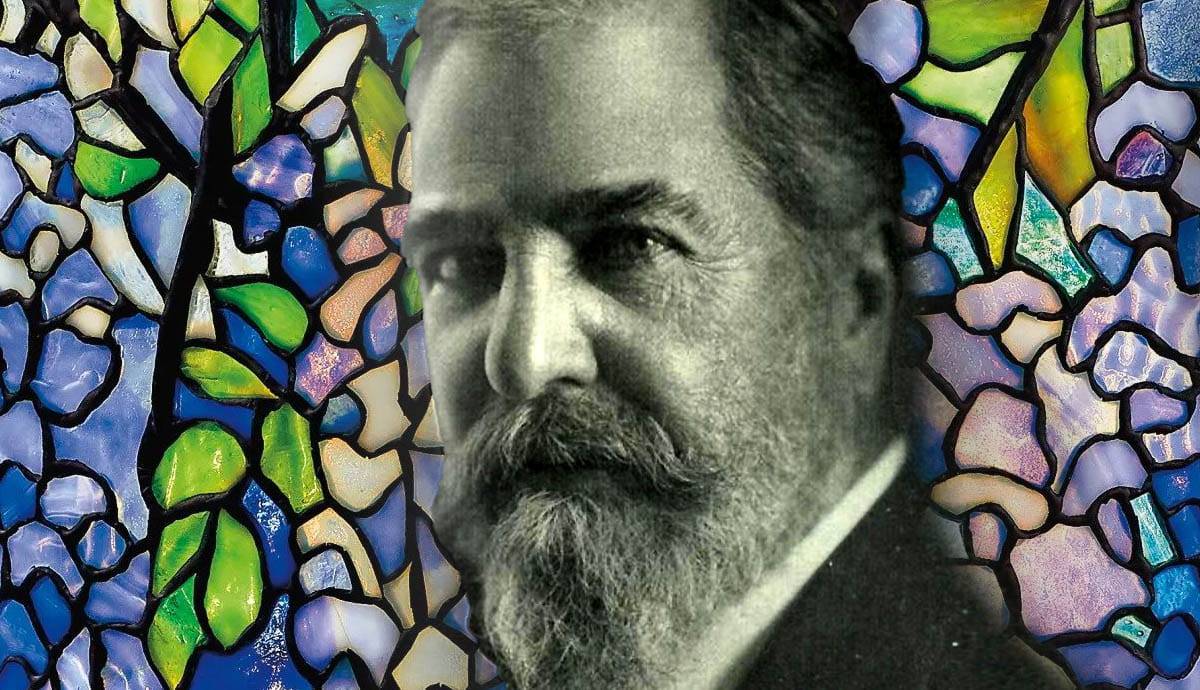 Even if you didn’t realize it at the time, you’ve almost certainly seen a Tiffany lamp (or a ubiquitous copycat) in real life—perhaps adding a sophisticated pop of color to your grandfather’s study, or proudly displayed in a local antique shop with a five-figure price tag. These iconic stained glass light fixtures have remained relevant for over a century because they are incredibly distinctive yet still manage to integrate beautifully into almost any room. Tiffany lamps are characterized by their intricate organic patterns, harmonious color palettes, and jewel-like stained glass. They are, of course, named after their inventor, American designer Louis Comfort Tiffany.

Along with his workshop of collaborators, Louis Comfort Tiffany creatively pushed the medium of glass to its artistic and functional limits. He boldly experimented with the elements of color, texture, and pattern – and the resulting Tiffany lamps went on to become both a turn-of-the-century trend and a timeless tradition that defines the past, present, and future of American decorative art.

As the son of Charles Lewis Tiffany, the founder of luxury jewelry retailer Tiffany & Co., Louis Comfort Tiffany (1848-1933) was perhaps destined to delight in the decorative arts of America’s Gilded Age. While his first artistic training was in painting, the New York City native went on to become internationally renowned for his innovative and artistic approach to designing decorative objects, including the stained glass Tiffany lamps. By the time he was 30 years old, Tiffany had mostly abandoned his study of painting in favor of pursuing a full-time career in the field of decorative arts.

Eager to master the craft of glasswork, Tiffany took on various jobs in Brooklyn glasshouses in the 1870s. He also formed an artist’s group—Louis Comfort Tiffany and Associated American Artists—along with three creative partners with whom he designed wallpaper, textiles, and furniture. The group was successful, even securing commissions to decorate the Mark Twain House in Connecticut and furnish parts of the White House, but disbanded just four years after its founding.

In part, it was Tiffany’s obsession with glasswork that led to the dissolution of the artist’s group. In its place, he founded the Tiffany Glass Company, which would later become known as Tiffany Studios, and even opened his own glass factory so he could more fully realize his goal of improving both the form and function of contemporary glass. With some financial support from his father, Louis Comfort Tiffany quickly flourished in his role as the soon-to-be-famous designer of Tiffany lamps and other decorative glassworks. The first Tiffany lamp was on the market by 1885—and it was an instant hit.

What Makes Tiffany Lamps So Iconic?

In developing the iconic Tiffany lamp, Louis Comfort Tiffany set out to design a light fixture that offered both show-stopping beauty and straightforward functionality. He was especially interested in playing with the color and texture of glass to brighten up the tradition of American interior decorating—literally and figuratively. A typical Tiffany lampshade might feature a sparkling swarm of dragonflies, an energetic overgrowth of springtime blossoms, or a tangle of grapevines ripe for the picking. These patterns are brought to life by a harmonious arrangement of bold colors that expertly play with contrasting and complementary hues.

These colors purposefully mimic the way real gemstones, like an emerald or a sapphire, boast richly saturated hues and reflect light in their delicate contours. The glass pieces of a Tiffany lamp are translucent enough for light to pass through, but their texture often has a gauzy or milky effect. This quality showcases the hand of the artisan by emphasizing the purposefully subtle variations in texture, thickness, and color saturation.

Tiffany lamps use metal to connect separate pieces of glass. Metal is a material often associated with the clean lines, sharp angles, and monumental skyscrapers of modernity—which makes Tiffany’s intricate, undulating metalwork unexpected and eye-catching. Additionally, the hollow base of a Tiffany lamp is typically made of pure brass featuring organic curves and motifs. Sometimes, a Tiffany lamp base would feature additional decorative elements, like art pottery, or delicate enamel or mosaic work in colors meant to complement a particular lampshade design.

Tiffany lamps were perhaps beloved because they bridged the gap between the past and the future. They represented the forward-thinking Art Nouveau movement, which was unfolding in Europe and the United States, and represented the ongoing growth of America’s economy and artistic identity at the turn of the century. At the same time, Tiffany lamps also invoked the nostalgia of Gothic-era stained glass and medieval cloisonné. Thanks to advances in glassmaking technology, an intrepid team of artisans, and eventually a factory of his own, Louis Comfort Tiffany’s iconic lamps captured and maintained international attention.

At the start of his foray into glassmaking, Louis Comfort Tiffany found he was dissatisfied with the selection of commercial glass that was available to him. He was interested in glass’s natural impurities, which could manifest unusual variations in texture, color, and translucence. Commercial glass factories, however, were unwilling to leave what they viewed as deficiencies in their products, even if an experimental artist like Tiffany was willing to purchase them that way. In addition to reluctantly settling for commercial sheets of smooth glass, Tiffany made use of perfectly imperfect – and conveniently very affordable – glass from discarded jars and bottles in some of his early work.

As demand for Tiffany lamps rapidly increased, Tiffany was able to open his own glass factory in Queens, where he could embrace impurities to his heart’s content. He trademarked the type of glass he made there, naming it Favrille, a term loosely based on a Latin word that means “made by hand.” With an entire factory devoted entirely to his glassworking whims, Tiffany developed the signature glasswork aesthetic of the Tiffany lamps: multidimensional, opalescent glass in jewel-like colors. Additionally, Louis Comfort Tiffany expounded upon centuries-old methods of joining pieces of glass together with metal to facilitate an unprecedented level of detail in stained glass patterns.

The traditional came glasswork technique was likely first developed in the 11th or 12th century by Gothic-era glassworkers crafting cathedral stained glass windows. Nearly one thousand years later, Louis Comfort Tiffany’s innovative use of came glasswork made the picturesque Tiffany lamps possible—and it revitalized the popularity of the stained glass aesthetic in interior decorating across America and beyond.

Tiffany elaborated upon this centuries-old process to develop his own glasswork method. Instead of using lead, the signature element in most traditional came glasswork, Tiffany utilized copper foil. But thanks to his profound aesthetic influence, the terms “Tiffany lamp” and “Tiffany-style lamp” have since been frequently used to describe lamps with leaded came glasswork that were not actually manufactured by Tiffany himself.

Came glasswork is the process by which individually cut pieces of glass are joined together in a metal framework to create a pattern. Each flat piece of glass is joined with another piece by a metal came strip that is soldered in order to bind the two sections together. A came strip can be made of different types of metals, including lead, zinc, brass, copper, or foil, depending on the design. An H-shaped came strip holds two pieces of glass together, and a U-shaped came strip is used along the outside edges of the glass.

The artisans of Tiffany Studios used the traditional technique of came glasswork to make the Tiffany lamps, stained glass windows, and other decorative objects featuring glass. The process of came glasswork required a combination of precision and creativity. Each Tiffany lamp required a team of skilled artisans to oversee its transformation from a selection of raw materials to a timeless piece of décor.

The Women Artisans of the Tiffany Lamps

At the height of Tiffany Studios’ popularity, Louis Comfort Tiffany employed over 300 artisans in its glass factory, several of whom were women who were influential designers and craftspeople in their own right. Often referred to as the “Tiffany Girls,” these women not only labored to produce decorative objects but also played a profound role in developing the famous aesthetic attributed to Tiffany. They thoughtfully selected and expertly cut pieces of colorful glass, often following patterns predetermined by Tiffany, but sometimes contributing their own motifs. Clara Driscoll, a talented artisan who was personally hired by Louis Comfort Tiffany, supervised the Women’s Glass Cutting Department and played a major role in finessing several popular Tiffany lamp designs. After twenty years, Driscoll abandoned her position when she married her husband, as only single women were permitted to work at Tiffany Studios at the time.

Tiffany Lamps: From the Turn of the Century to Today

In addition to defining the aesthetics of American decorative art, Louis Comfort Tiffany – and especially the Tiffany lamp – contributed to the international Art Nouveau movement. The intricate designs and organic motifs of Tiffany stained glass both were inspired by and further popularized Art Nouveau in Europe and the United States. Now, over a century after their debut, Tiffany lamps remain as fashionable – and as valuable – as ever. An authentic lamp designed and produced by Tiffany studios will typically sell for at least four thousand dollars today, but the most expensive Tiffany lamps have fetched over a million dollars at auction. Fortunately for Tiffany lamp lovers, there have been countless affordable alternatives on the market since Louis Comfort Tiffany popularized the aesthetic in the late 19th century.