HomePhilosophy“On the Nature of Things”: Lucretius’ Secrets of the Universe

“On the Nature of Things”: Lucretius’ Secrets of the Universe

On the Nature of Things by Roman philosopher Lucretius is one of the most influential texts in the history of philosophy. 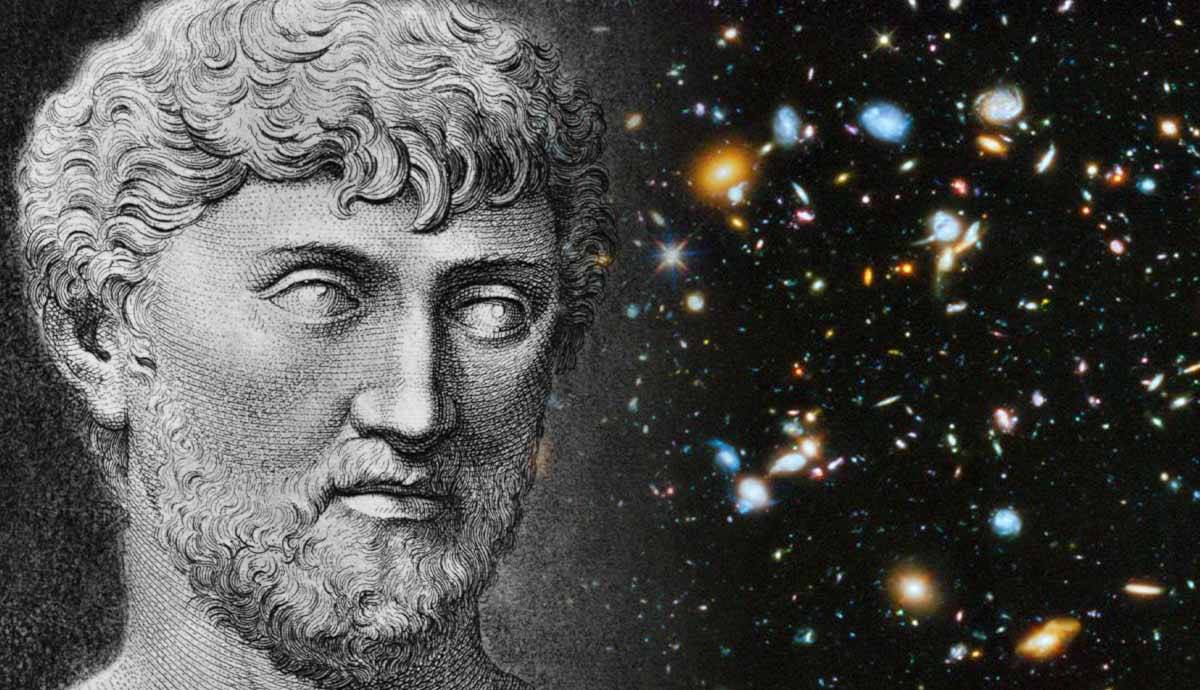 Lucretius’ On the Nature of Things has proved to be one of philosophy’s most influential texts. This epic Latin poem explores many important philosophical themes including physics, nature and ethics. Written during the first century BC, most readers of Lucretius today are struck by its ‘modernity’, since many of the ideas the author explores appear to anticipate 21st century scientific theories such as evolution.

However, On the Nature of Things is really a detailed account of Epicurean philosophy. It’s true that many of its ideas grew ever more popular from the Renaissance onwards, but one should not project modern-day ideals onto Lucretius and the context he was writing in. This article provides an introduction to the author, how the book was written and some of the most innovative ideas put forward in On the Nature of Things, in order to understand the context behind one of philosophy’s most widely read works.

Who was Lucretius? A Brief Biography

A very brief mention of Lucretius appears in a text by St. Jerome (? – 420 AD), one of the early Church Fathers, who asserts that Lucretius was born in 94 BC. Jerome claims that Lucretius took a love potion which drove him insane, before he eventually killed himself at the age of 44. This account is heavily disputed by academics, who point out that Lucretius’ philosophy (which denies any purpose to the creation of the world and argues there is no afterlife) was deeply unpopular among early Christians who wanted to stamp out such teachings. It’s far more likely that Jerome made up this account to discredit Lucretius.

What is certain is that there was a connection between Lucretius and Cicero (106 BC – 43 BC), who mentions the former’s poetry in a letter to his brother: “The poems of Lucretius are as you write in your letter—they have many highlights of genius, yet also much artistry.” Some people believe that Cicero may have been involved in the publication of Lucretius’ writing. The famous poet Virgil (70 BC – 19 BC) was also a huge admirer of Lucretius and wrote a poem in the Georgics which celebrates the main themes in On the Nature of Things.

Cornelius Nepos (c.110 BC – c. 25 BC), a Roman historian, mentions the author briefly in the phrase “after the death of Lucretius and Catullus.” Lucretius himself dedicates On the Nature of Things to someone named Memmius, who was likely Gaius Memmius, the son-in-law of a Roman praetor. Apart from these brief mentions and connections, there are no reliable sources about Lucretius himself.

‘On the Nature of Things’: How and Why Lucretius Wrote his Poem

On the Nature of Things is a didactic poem split into six books. The original Latin title of the work, De rerum natura, is a translation of Epicurus’ most well-known work Peri physeos (On Nature). It contains over 7,000 dactylic hexameters which expound Epicurean philosophy via poetic language rich in metaphor. Lucretius planned his poem very carefully. The poem’s structure is made up of three matching pairs of books which deal with the following themes: atoms and their role within the universe; the soul; and the cosmos.

As well as the symmetrical structure, each book begins with a clear introduction. Books I and II describe the nature of the atomic universe, and provide an opportunity to refute the physical theories of other philosophical schools, including Stoicism and the pre-Socratics (e.g. Heraclitus, Anaxagoras). Books III and IV describe the atomic structure of the soul and the body. Finally, Book V and VI cover the creation of the universe, celestial beings, and natural phenomena such as thunder and lightning.

Mortality is a recurring theme throughout the book. On the Nature of Things begins with a hymn to Venus (described as the goddess who inspires birth and life). The poem then includes two famous passages on the nature of death. One occurs at the end of Book III, where Lucretius writes eloquently on why fearing death is pointless. The other appears at the end of the entire poem and features a description of the Athenian plague during the Peloponnesian War between Athens and Sparta. This ending contrasts heavily with the invocation to Venus at the start of the book.

It is widely believed that Lucretius died before he finished the poem. As a result, scholars dispute whether the text’s somber ending stands on its own or whether Lucretius would have made alterations to it.

The Role of the Gods According to Lucretius

Because Lucretius’ atomism is a materialist philosophy which gives no religious significance to the world’s creation or its workings, many assume that Lucretius did not believe in the Roman gods at all. In fact, Lucretius does briefly mention the gods and their role in the universe.

His predecessor Epicurus has already argued for the existence of the gods. But these aren’t the vengeful, petty and jealous gods we’ve come to know from the likes of Homer and the Greek tragedies. Instead, Epicurus describes divine beings as simulacra (images) who only have quasi-bodies and exist in the space between worlds. These gods have access to an infinite number of atoms which allows them to live forever.

Lucretius builds on this definition by emphasizing that the gods have no impact whatsoever on earthly affairs. They do not interfere with human lives and therefore don’t need people to make offerings to them or say prayers. The gods are simply there, remote from us, existing in their own particular plane of being. In book five of De rerum natura, Lucretius says he will provide a more detailed explanation of the physical make-up of the gods, but sadly this explanation never appears.

The Importance of ‘The Swerve’

Lucretius is almost always mentioned in relation to a concept called ‘the swerve’. This is an English translation of the Latin word clinamen which Lucretius uses to describe the behavior of atoms and their movements.

According to On the Nature of Things, atoms are constantly moving at great speed through the void. They tend to move downwards but when they collide with other atoms they can be sent in different directions. If one zooms out on this picture, these collisions are not visible: the atoms are busy forming millions of fairly stable and complex patterns of motion which simply look like objects in motion or at rest. In fact, our minds, bodies and everything people can see and feel is the product of millions of atoms in constant motion.

So, what role does the swerve play in this notion of the universe? Lucretius accounts for the idea of free will in the cosmos by introducing the swerve. Sometimes atoms diverge or ‘swerve’ from their predicted course and in doing so create random collisions. This helps to account for the idea that even in an atomist universe there is always an element of chance at play in the world around us.

‘On the Nature of Things’ and Lucretius’ Legacy

Lucretius has influenced countless philosophers, poets and thinkers over the centuries, and his popularity continues till this day. The theories proposed in On the Nature of Things proved to be particularly important during the Renaissance and Enlightenment periods. Lucretius’ account of an atomic universe influenced the work of Isaac Newton, as well as the literature of writers like John Milton and the philosophy of Spinoza.

Today, one could read Lucretius’ work and marvel at how ‘correct’ many of his ideas turned out to be considering what modern science has established about the universe. But a massive part of Lucretius’ appeal is the beauty of his writing and the elegance with which he uses atomism to explain the more abstract problems that trouble human beings, such as death and the cycle of life.

The Art of Conversation: From Cicero to Habermas

The Art of Conversation: From Cicero to Habermas