Atomism has been around for centuries in philosophy, long before the modern scientific definition of atoms. This article explores some of the key philosophers and ideas of ancient Atomists. 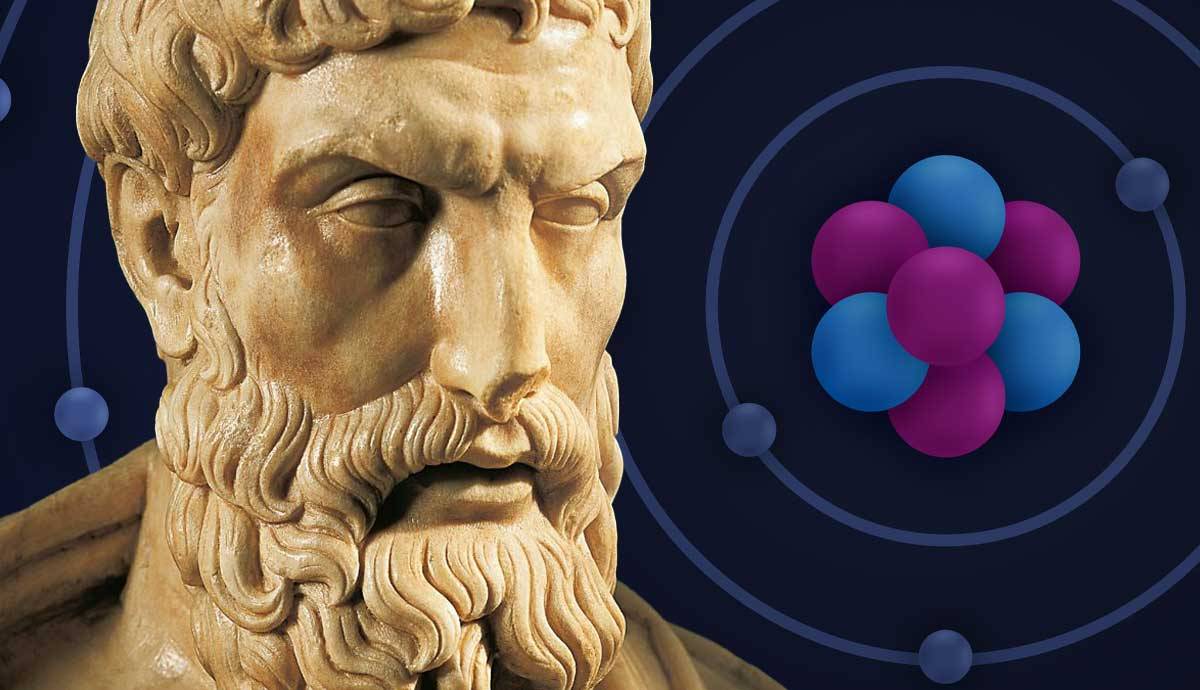 The word ‘atom’ has its roots in the Greek adjective “atomos”, which translates literally to “uncuttable”. Today the atomic theory is generally taught within a scientific context. During science class, children learn that atoms are the building blocks of all matter on earth: the smallest units of matter that, until fairly recently, were thought to be indivisible or “uncuttable”. The idea that the physical world is composed of microscopic atoms is thousands of years old. Although Atomism is not technically an official ‘school’ like movements such as Stoicism and Platonism, many influential ancient philosophers developed atomist views of the universe. Their natural philosophy which generally holds that everything exists and changes due to the interactions of tiny, indivisible atoms has come to be referred to as atomism.

Well-known thinkers like Epicurus and Lucretius linked their atomistic beliefs to other areas of philosophy such as ethics and morality. However, this article will focus on the development of atomism as a natural philosophy.

The Beginnings of Atomism: Leucippus and Democritus

Leucippus was a 5th century BC philosopher from an unknown area of ancient Greece. Very little is known about his life. Thanks to his famous disciple Democritus, it is known that Leucippus is the earliest known atomist. Democritus documented his mentor’s ideas and helped to popularize the theory that the natural world is made up of two components: atoms and void.

Void is nothing, a vacuum, the absence or negation of matter. Atoms, according to Leucippus and Democritus, are eternal, indivisible bodies that interact with each other within the void. Similar to 21st century scientific notions of atoms, Leucippus and Democritus argue that atoms can move about, form clusters and combine to make matter. However, these clusters are not permanently fused together. If atoms are separated by a void, they must always bounce off one another when they collide.

The idea of indivisible and unchanging atoms endlessly bouncing off one another is key to understanding the atomist view of change. It naturally follows from this idea that the world around us is constantly in flux, always subject to change. Nothing is ever truly stable and permanent, even if it appears so at first glance. Trees lose their leaves, walls gradually erode, rivers flow and change the shape of riverbanks. These views of the world remained influential centuries later, particularly in the Renaissance among philosophers such as Giordano Bruno.

Atomism in Platonism and Aristotle’s Response

Atomist theories weren’t restricted to pre-Socratic philosophers like Leucippus and Democritus. In fact, Plato arguably presents an atomist physical theory in the Timaeus. At least, that was how Aristotle interpreted it. The Timaeus is Plato’s most comprehensive elaboration of a natural philosophy, and in it he identifies the four basic forms of matter: earth, air, fire and water.

Plato theorizes that these solid forms of matter are composed of indivisible elements shaped like triangles (contrary to the popular conception of atoms as spheres). He believes triangles must be the correct form because they can join together to make very different kinds of shapes. This also explains how (as many Greeks at the time believed) earth can transform into fire etc. Much like modern-day scientific theories around atoms, Plato argues that the atoms themselves are indivisible, not the solid matter they join together to create.

Aristotle was not a huge fan of Plato’s atomism. Although it was Aristotle who first pointed out the similarities between Plato’s theories and those of Democritus and Leucippus, he criticized atomist natural philosophy. Aristotle argued that the four elements were not composed of atoms but were continuous forms of matter. He also denied that a ‘void’ between atoms could exist. In Aristotle’s philosophy, change was not explained by a rearrangement of atoms but by the transformation of matter from its potential to its actuality. Although nowadays the theories of Plato and Democritus seem closer to the truth, Aristotle’s account proved to be the more widely accepted account in the centuries that followed the Ancient Greek period.

Epicurus in the Early Hellenistic period

The history of atomism cannot be examined without mentioning Epicurus. Epicurus was an early Hellenistic philosopher who supposedly learned about atomist thought via one of Democritus’ followers. Despite this, he did make some adaptations to Democritean philosophy in order to fit his own school of thought.

In particular, Epicurus views the motion of atoms as tending to fall downwards through an infinite universe. Whereas Democritus believed that atoms moved towards the center of the cosmos, Epicurus believed in a general downwards trajectory which was occasionally interrupted by the atoms ‘swerving’ from their path and into one another.

Epicurus believed that this ‘swerve’ was responsible for the infinite collisions between atoms as they fall, ensuring that they bounce off one another to create various forms of matter. As well as these developments in the actual physical theory of atomism, Epicurus applied atomism to other aspects of philosophy, even touting atomist thought as key to living a tranquil life by linking it to his definitions of pleasure and pain.

Lucretius: The Most Famous Atomist?

It would be impossible to recount all of the relevant parts of the poem here, but the first few verses in particular help to illuminate how Lucretius interpreted Epicurus’ thought. The De rerum natura argues that nothing comes into being out of nothing and disappears into nothing. Like Democritus, universal life is split into void and body or matter. The nature that surrounds us is a composition of these two things.

In true atomistic form, the body is characterized by microscopic atoms. These tiny indivisible atoms exist with an infinite universe, since there are an infinite number of atoms extending into infinite space. Thanks to descriptions like these, which mirror on one level our scientific understanding of the universe, Lucretius and his De rerum natura remain hugely popular to this day.

Atomism in the Medieval and Renaissance Periods

Despite the fact that the early Church fathers despised Lucretius (who said that there was no afterlife and no purpose to the world’s creation), his poem and the works of other ancient atomists continued to influence thinkers from many different cultures. As well as reaching the Islamic world, atomism experienced various surges of interest throughout the Middle Ages and into the Renaissance.

Calcidius’ commentary of Plato’s Timaeus helped to generate scholarship on atomism in the 12th and 14th centuries. A lot of this scholarship involved trying to merge atomist views of the world with the more popular, Aristotelian natural philosophy, particularly his doctrine of the four elements (fire, air, earth and water). Thierry of Chartres, for example, used atomism to try and explain the motion of these elements by arguing that each one was composed of atoms that moved at different speeds.

Atomism in the Renaissance developed into a more anti-establishment philosophy compared with the Middle Ages. It was generally studied and praised by radical anti-Aristotelian thinkers such as Giordano Bruno, who weren’t satisfied with the Christian-Aristotelian view of the world being promoted in universities. Bruno incorporated atoms into his famous theory of an infinite universe filled with infinite planets and solar systems. These atoms were the smallest forms of matter and were infused with a divine substance which linked everything to everything else. Unfortunately, religious authorities considered these ideas to be deeply heretical and he was eventually burned at the stake.

Atomism in the Enlightenment and Beyond

Despite the fate of the likes of Bruno, interest in atomism survived well into the 17th century and beyond. Unlike ancient atomism, the growing scientific movement of the Enlightenment was generally more interested in ‘mechanical atomism’. Rather than using atomism to explore the nature of the soul, celestial beings and so on, mechanical atomists preferred to apply their theories to the material world around them.

Like so many theories before them, mechanical atomism also believed that the world was composed entirely of atoms moving through the void. Atoms were still changeless and mechanical atomists still viewed them as the smallest element of matter. Isaac Newton’s work on forces were incorporated into explanations of the properties of these atoms, but philosophers and scientists struggled to prove their theories via empirical experiments.

Since then, atomism has continued to inspire various thinkers and scientists. It has appeared in research on thermodynamics and kinetic theory in the 19th century, as well as early 20th century theories on particle motion. Although there are obviously vast differences in context and theory between ancient philosophical atomism and modern-day atomic theory, it’s still amazing to think that people like Democritus were ‘proved right’ about their ideas to a certain degree!

What Were Aristotle’s Four Cardinal Virtues?