Giordano Bruno was a controversial Renaissance philosopher whose theories on space and infinity led the Roman Inquisition to burn him at the stake. 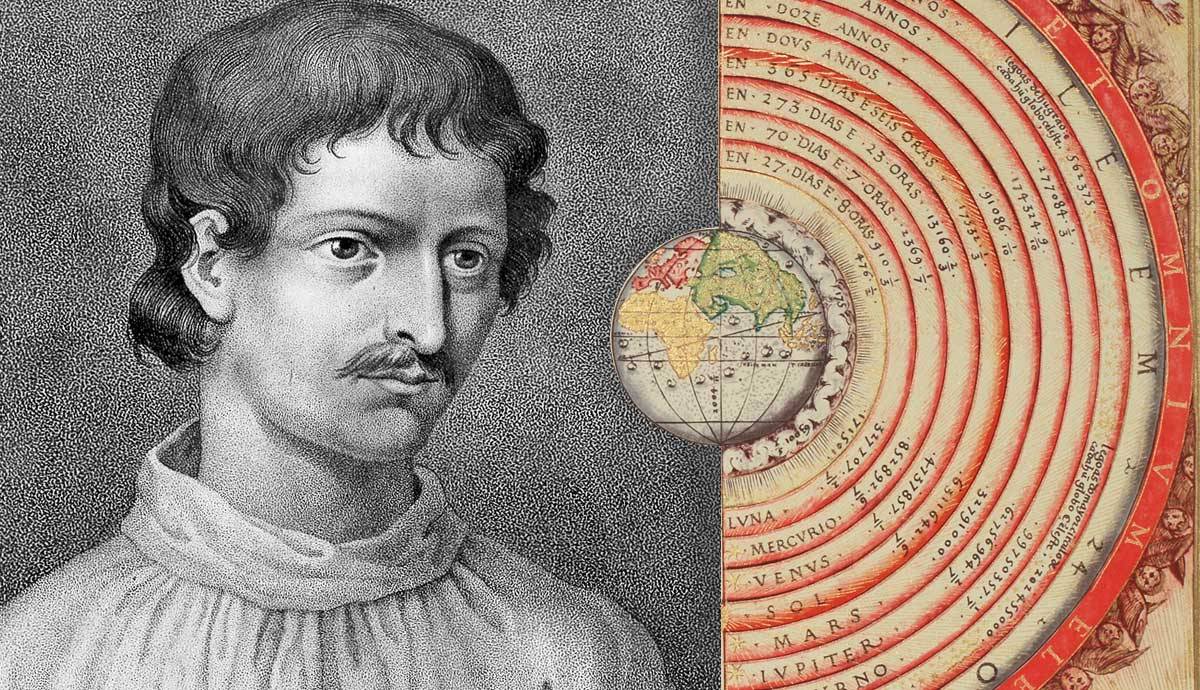 Giordano Bruno is a man of many labels. During his short life (1548-1600), Bruno was a monk, a philosopher, a cosmologist and a mathematician. He studied magic and briefly gained fame among European nobility for his incredible memory (which some people attributed to secret magical powers!). Tragically, Bruno was also denounced as a heretic due to his controversial views on the nature of the universe, as well as his rejection of certain Catholic teachings. However, although the Roman Inquisition burned Bruno at the stake, they failed to destroy his legacy. In fact, many people today regard Giordano Bruno as a martyr who was willing to speak truth to power. So who exactly was the man behind the labels?

Bruno was born in Nola, near Naples, in 1548. As a teenager, he joined a Dominican convent and eventually became an ordained priest in 1572. However, he was excommunicated and forced to flee after contemporaries found banned heretical books in his possession. Thus began a familiar cycle for Bruno, who tended to attract trouble wherever he went. Between 1576 and 1578 alone, he lived in Turin, Brescia, Bergamo, Venice, Padua and Milan, among other places.

He eventually left Italy altogether and traveled across Europe looking for teaching jobs or patronage. He struggled in this endeavor due to his habit of clashing with local religious or political authorities. In Geneva, for example, Bruno began to earn a living as a professor of theology. But after publishing a treatise which criticized the head of the Genevan academy, Bruno was forced to apologize for his actions and leave the city immediately.

Bruno’s Time at the French Court

Despite these issues, Bruno managed to work his way into the French court of Henry III. He arrived in Paris in 1581, where he enjoyed success as a lecturer and published some texts on memorisation, including Circe’s Song (1582) and The Art of Memory (1582). It was here that his reputation as a master of the ‘mnemonic arts’ (the art of memorisation) really hit off. Mnemonics was a growing trend in 16th century Europe. Academics enjoyed learning how to recite speeches and texts from memory, since this practice harked back to the ancient Greek art of rhetoric. After enjoying some renown for these talents in the French court, Bruno decided to move to London in 1584.

Bruno’s Theories on the Infinite Universe

Upon his arrival in England, Bruno had already embraced his reputation as an agitator within academic circles. In the title page of his play The Candlebearer (1582), Bruno describes himself as “Bruno from Nola, Academic of no Academy, aka The Troublemaker.” His troublemaking in England chiefly comprised of writing a series of six texts which explored his controversial ideas on the nature of the universe. With titles such as On The Infinite Universe and Worlds (1584), it’s clear that Giordano Bruno was more than willing to go against Renaissance society’s prevailing belief in a closed, finite universe.

Within these six books, Bruno argues passionately in favor of many things that we know to be true today, including that the sun is in the center of the solar system, that the Earth rotates on its axis and that the universe itself is infinite. The tragedy of Bruno’s life was his failure to get people to take these theories seriously. But 16th century cosmology was deeply intertwined with Christian teachings, and to argue against this cosmology was to argue against Christianity itself.

In the 1500s, Europeans believed that the Earth (and not the sun) was in the center of one single solar system. Humans were God’s most superior creation, so of course they existed in the middle of everything else. Beyond the other planets and stars was a boundary which marked the start of the heavenly realm where God resided, encircling the entire solar system with his divine presence. In Europe, this vision of the universe was the accepted status quo for many centuries.

Bruno’s insistence that the universe was infinite posed serious theological dilemmas. If the universe extended out into space and time forever, then where exactly was God’s realm located among the endless planets and stars? Rather than God encircling Earth and the stars with his divine presence, in Bruno’s infinite universe God was far less visible: for Bruno’s critics, this was a deeply troubling absence.

Furthermore, if the universe was full of infinite solar systems as Bruno claimed, what was so special about the Earth? After all, the Bible makes no mention of other planets. Did God actually create an infinite number of planets? If so, why is this not included in scripture? The Polish astronomer Nicolaus Copernicus (1473-1543) had previously argued that the universe was heliocentric. But even Copernicus hadn’t gone so far as to theorize that there were infinite ‘earths’ and infinite ‘suns’ just like ours. Bruno’s theories unsettled the natural, hierarchical order of the traditional finite universe, where humans were at the center of a creation that God, the maker, encircled with his protective divine self.

Tensions in England and France

Needless to say, Bruno clashed with English scholars over his controversial views. George Abbot, then an academic at Oxford University, immortalized the Italian scholar with a particularly flattering description. Abbot listened to Bruno argue in a lecture “that the earth did go round, and the heavens did stand still; whereas in truth it was his own head which rather did run round, and his brains did not stand still” (Blum, 2012). Not long afterwards, Abbot became Archbishop of Canterbury. As we will see, Bruno met a very different fate.

The errant philosopher returned to France in 1585 after failing to find favor at Elizabeth I’s court. But things in Paris had changed: during a period of violent clashes between Catholics and Protestants, King Henry III revoked his protection of Protestants. The atmosphere was so fraught that Bruno actually tried (and failed) to re-enter the Catholic Church in order to feel safer. Despite the religious tensions, Bruno went ahead and organized a public debate which pitted his philosophy on nature and the universe against the prevailing orthodoxy.

The debate received mixed reviews. During the session itself, eyewitnesses reported that one man stormed the stage and insulted Bruno “with abusive words, calling him Jordanus Brutus” (Blum, 2012). However, another observer notes that Bruno “seems to have good arguments. But he will go to Germany soon. It is enough that he left behind a great controversy in England; he is a pleasant and fun loving chap” (Blum, 2012).

Bruno Decides to Return to Italy

And so Bruno, ever the lone academic, continued his wanderings. He wrote more books, explored new theories on magic and mathematics, but once again failed to find a permanent home. While in Frankfurt, he received an invitation from the Venetian nobleman Giovanni Mocenigo. Mocenigo was a big fan of Bruno’s books on memory and wished to learn more about them. Bruno arrived in Venice in 1591, but rather than tutoring Mocenigo as expected, the philosopher spent most of his time trying to get a job at the nearby University of Padua! Mocenigo grew frustrated with Bruno’s lack of teaching and denounced him as a heretic to the Venetian Inquisition on May 23rd, 1592.

Bruno was swiftly put on trial in Venice. Somewhat surprisingly, the proceedings went smoothly at first. Mocenigo couldn’t provide any concrete evidence for his accusations, while Bruno apologized for the few snippets of philosophy he had shared with Mocenigo. However, in the 16th century it was customary for branches of the Inquisition to report their findings to Rome. And the Roman Inquisition had a very good memory, especially when it came to Giordano Bruno. Remember those heretical texts that led to Bruno’s excommunication from the Dominican order?

Bruno’s Persecution at the Hands of the Roman Inquisition

Bruno was now forced to appear on trial in Rome. This time, the inquisitors sifted through his back catalog of controversial texts on the nature of the universe, as well as his views on certain religious points of faith relating to the Incarnation, the soul and the veneration of saints, among other things.

The Inquisition tended to judge the accused based on how repentant they were for their past actions during the trial itself. They didn’t automatically punish people for having published heretical texts or argued against Christian doctrine. Instead they wanted to see remorse. Therefore the key to Bruno’s survival was recantation i.e. admitting guilt, repenting, allowing any previously published texts to be destroyed and agreeing never to teach these things in future.

This was not a price Bruno was willing to pay. Despite showing a bit of remorse during his Venice trial, Bruno refused to recant his entire world view and instead wrote lengthy depositions defending his views. His trial lasted several years. Eventually the Inquisitors found that the defendant remained in his heresy “without remorse, obstinately, and hardened” (Firpo, 1993). This was confirmed by Bruno himself, who asserted that “he neither needed nor wished to recant, that he had nothing to recant, that he did not have views to recant.”

Unsurprisingly, Bruno was sentenced to death. His judgment was passed on February 8th, 1600. After the tribunal read out his death sentence, Bruno responded: “Perhaps your fear in passing judgment on me is greater than mine in receiving it.”

A week or so later on February 17th, Bruno was burned alive on a stake in the middle of the Campo de’ Fiori in Rome. Most victims of the stake were strangled beforehand, but the executioners denied Bruno this mercy. An eyewitness named Caspar Schoppe reported that somebody held up a crucifix to Bruno whilst he was tied to the stake, but that he defiantly turned away from it. Other reports claim that Bruno’s mouth was symbolically clamped shut with a metal plate.

Giordano Bruno’s death was vicious and cruel. But despite the best efforts of the religious and academic elites, Bruno’s ideas survived his execution. His theories on the nature of infinity attracted the attention of Gottfried Wilhelm Leibniz, while his criticism of the Catholic Church in Rome influenced the British philosopher John Toland (1670-1722). Bruno became particularly popular in German philosophical circles from the 1700s onwards, before his legacy was re-examined in the 19th century by fellow Italians including Benedetto Croce and Giovanni Gentile.

However, it’s probably Bruno’s refusal to comply with prevailing orthodoxy that has inspired people the most. Today in Rome’s Campo de’ Fiori, the very marketplace in which he was executed, a giant statue of Bruno now stands defiant.

Was Giordano Bruno a Heretic? A Deeper Look into His Pantheism