Gottfried Wilhelm Leibniz was one of the most significant philosophers of the 17th century. His approach to (im)possibility, God, and evil have been deeply influential. 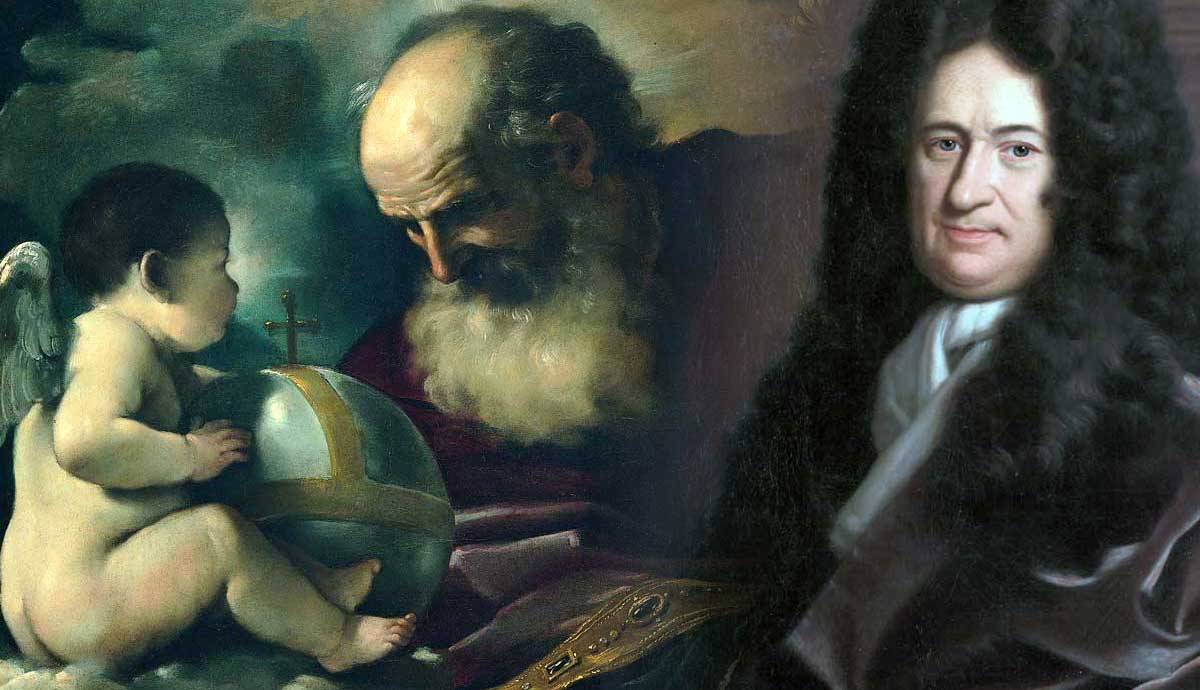 What was the philosophy of Gottfried Wilhelm Leibniz? This article will explore several of his contributions to philosophical logic and epistemology, as well as his concept of God through the lens of the defining concept of Leibnizian thought: that of Theodicy.

Leibniz is commonly regarded as the last ‘universal genius’, that is, one who can reasonably be said to have proficient knowledge of every or almost every field of intellectual endeavour in the time and place in which they lived. Denis Diderot’s oft-quoted description of Leibniz is worth quoting: ““Perhaps never has a man read as much, studied as much, meditated more, and written more than Leibniz… What he has composed on the world, God, nature, and the soul is of the most sublime eloquence. If his ideas had been expressed with the flair of Plato, the philosopher of Leipzig would cede nothing to the philosopher of Athens”.

The Life of Leibniz: Working With Others, Standing Alone

Leibniz was born in Leipzig, in the eastern part of modern-day Germany, and he was in turn a student and an academic at the local university. As with many philosophers of the time, he was much involved in political and diplomatic work – in his case, on behalf of the House of Hanover – which gave him ample opportunity to travel from his relatively isolated position in Leipzig and speak with other major intellectuals.

Leibniz spoke to Malebranche, Huygens, Spinoza and Pascal over the course of his lifetime. Based on extensive written correspondence, Leibniz’s work was a product of the increasingly interconnected European intellectual environment as well as one of individual genius when he was working in isolation. This European intellectual establishment was to turn its back on him after his death, in part due to a change in fashions (against system building and rationalism in philosophy, for instance) and in part due to a controversy of his claim to have discovered calculus independently of Newton.

The value of metaphysics, for Leibniz, is that of striving to emulate God, who is capable of distinguishing sense from nonsense, the knowable from the unknowable, at all times and in all things. In other words, it is part of our nature as human beings to strive towards the most general kinds of understanding.

Everything Is Intelligible, Nothing Is Contradictory

Yet, one consequence of Leibniz framing this in terms of our nature is that he felt that this general kind of understanding would make itself apparent to us as we are, grounded in a particular point of view. This is the crux of Leibniz’s epistemology.

That isn’t to say that knowledge is relative to that point of view – all knowledge is a priori – but our ability to know it is derived from our context and contextual relations. The relations of being a human being is one such relation, but so too are the relations involved in living in a certain intellectual culture, etc.

Leibniz assumes from the outset that things do in fact make sense – “nothing unintelligible happens” – and it is this which constitutes the first principle of Leibnizian philosophy, known as the ‘principle of sufficient reason’, which states that there is some intelligible reason for everything; for every state of being, for every event, every change.

Like Descartes, Leibniz’s approach to metaphysics has a strong religious element. Leibniz is well known for his attempt at a theodicy, and his use of possibility and necessity to generate said theodicy. A theodicy is a response to the problem of evil, which is a philosophical problem that emerges for those who believe in a certain kind of deity: one who is omnipotent, omniscient and omnibenevolent.

For many who hold the Abrahamic faiths – that is, for many Christians, Muslims and Jews – these are implicitly or explicitly essential features of God (although this is not uniformly so, and certain theodicies attempt to limit or do away with one of these qualities).

A theodicy is any theory which attempts to answer the challenge posed by the problem of evil to belief in God. Leibniz’s argument is this: God is responsible for all that is contingently the case, which means – at least in Leibniz’s terminology – God is responsible for the instantiation of the world. The actual world, meaning the one we are in now, is one of various possible worlds.

An intriguing ambiguity is that whereas the evil in the problem of evil is normally understood as a kind of moral evil, or at least evil which can be assessed in moral terms, that is not the sense in which Leibniz conceives of our world as being the ‘best’. Goodness, and so the superlative quality of goodness which is for something to be the ‘best’, relates not to any particular conception of goodness but to a form of goodness which is intrinsic to the form of reality. This is not, at least in any straightforward sense, the conception of goodness which corresponds to the evil we have in mind when the problem of evil is raised.

Whether or not atrocities are part of the order of things does not seem to be directly relevant to our assessment of whether they are evil. Yet on the other hand, whether some thing counts as an instance of evil does seem to at least partly involve some assessments about the status of that thing within wider structures of reality. Although natural disasters are often referred to as ‘natural evil’ in the context of theodicy and the problem of evil, there is clearly a sense in which natural disasters are not evil in the way that human evil is.

Perhaps that sense is partly informed by the fact that any individual instance of them is a terrible thing, that natural disasters happen at all is a necessary component of certain weather, tectonic and oceanic processes functioning, and it is their functioning in the way they do which makes life possible in the first place. Clearly, this isn’t the only reason to distinguish between human evil and natural evil, but it might go some way to understanding what Leibniz has in mind when he argues that our world, in spite of the many instances of evil, is nonetheless the best of all possible worlds.

The Basic Datum Argument and the Limits of Ethical Discourse

The problem of theodicy – both posed in terms of whether theodicy is possible, and in terms of what a plausible theodicy would have to prove – is an old one. The very earliest Christian theorists – most prominently St Augustine and St Irenaeus – were deeply concerned with the problem of evil, and it has inspired an enormous quantity of philosophical and theological discussion. Therefore, it is easy to lose sight of the very simplicity of the most basic argument against the possibility of theodicy.

As Adrian Moore puts it: “The existence of better possible worlds seems itself to be a basic datum, impinging on us every bit as forcefully as any principle to the effect that things always make sense – nay, through our various trials and afflictions, altogether more forcefully”.

“To reject that datum is not merely to invite scepticism about whatever reasoning has brought us to do so. It is to invite accusations of intellectualist insensibility. It is to risk making a mockery of our very real, very unmockable suffering”.

It is possible to still further, and expand the notion of the ‘basic datum’ into an argument about the conceivability of ethical discourse. If we accept Leibniz’s claim – that we live in the best of all possible worlds – what then are the consequences of this upon those ethical claims which involve attempts to change the world in some way or other? Ethical discourse, insofar as it is normative – that is, it seeks to influence the way people behave – seems to suppose at least the possibility that we do not live in the best of all possible worlds.

Accepting Leibniz’s view might not preclude the possibility of ethical discourse as such, but would presumably alter our conception of change such that before any improvement is made, before any kind of unnecessary suffering can be limited or eradicated, the world itself must change.

In short, this would force us to conceive of ethical developments in teleological terms – as progressing towards a fixed point. Fixed, that is, by the possibility conditions which delimit the best possible world, as known only to God. It would also force us to see ourselves as ethical beings which are fundamentally bound by historical contingencies in a broad sense, not open to a variety of possible ethical or social arrangements at any given time.