HomePhilosophyWas Giordano Bruno a Heretic? A Deeper Look into His Pantheism

Was Giordano Bruno a Heretic? A Deeper Look into His Pantheism

Giordano Bruno is a key proponent of pantheism. His theories on the infinite universe infused with a divine World Soul became influential after his death. 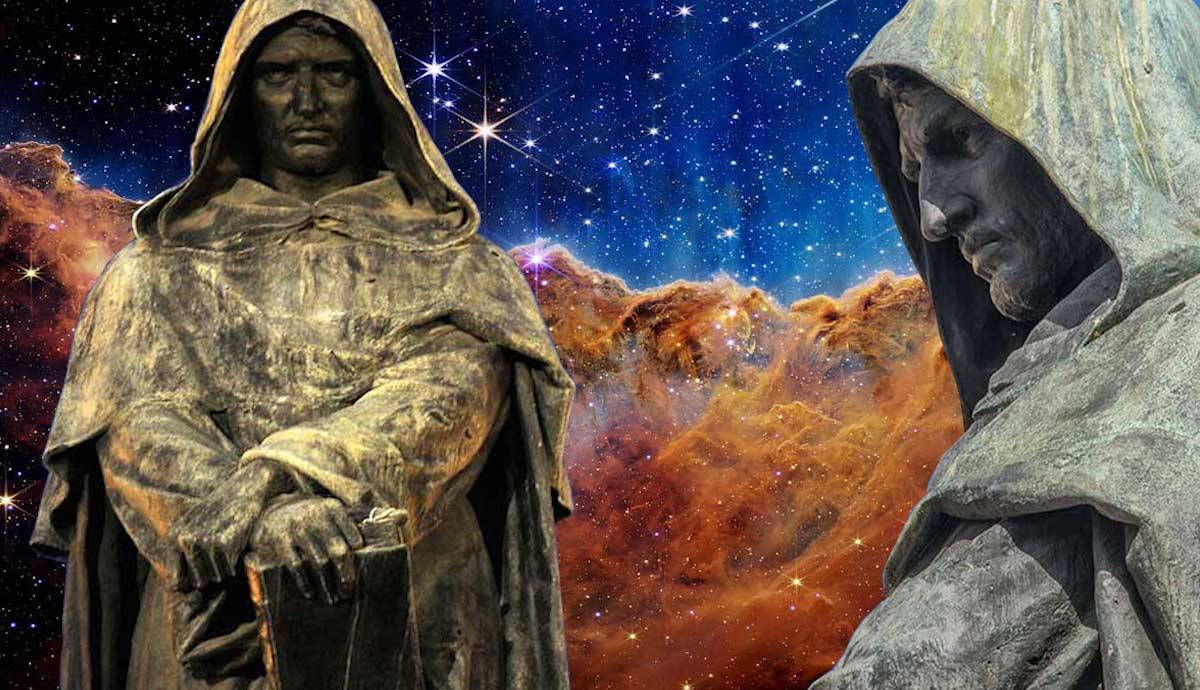 Giordano Bruno (1548-1600) is notoriously difficult to classify. He was an Italian philosopher, astronomer, magician, mathematician and many other labels during his short life. However, he is perhaps best-known today for his groundbreaking theories on the nature of the universe, many of which anticipated our modern scientific understanding of space. In this article, we will explore his pantheism, and the way his innovative outlook got him accused of heresy.

Was Giordano Bruno a Heretic?

Most of Giordano Bruno’s contemporaries believed in a Christian-Aristotelian view of the universe. Renaissance scholars thought that the Earth was at the center of the solar system. They also believed that the universe was finite and encircled by a sphere of fixed stars, beyond which lay God’s realm.

Bruno, on the other hand, rejected this idea of the universe. He believed that the sun was in the center of the solar system, and that space reached out infinitely in all directions, filled with innumerable planets and stars. Sound familiar?

Unfortunately, these ideas, alongside Bruno’s other theories on Christian doctrine, led to his tragic demise. The Catholic Church burned him at the stake on 17th February 1600 at the Campo de’ Fiori in Rome. One eyewitness reported that the executioners hammered a nail through his mouth to symbolically ‘shut him up’ before the flames swallowed Bruno completely.

In the end, the Catholic Church failed to repress Bruno’s ideology. His ideas became extremely influential among well-known philosophers in the centuries following his death. One of these ideas was pantheism, or the notion that God flows within every part of the universe. Pantheism was an important characteristic of Bruno’s infinite universe, and his theories later proved to be popular during the Enlightenment and beyond.

‘Pantheism’ is a relatively modern term, constructed from the Greek words pan (all) and theos (God). Many sources attribute its first use to the philosopher John Toland in the 18th century. However, the ideas behind pantheism are as ancient as philosophy itself. Many thinkers, from Heraclitus to Johannes Scotus Eriugena, could be considered pantheists to certain degrees.

In its most general sense, pantheism asserts the idea that God/divinity is identical with the cosmos. Nothing is outside of God, i.e., God is not a divine entity who exists independently from the material universe. However, despite this definition, there is no one single school of Pantheism. Instead, it’s better to think of pantheism as an umbrella term which incorporates several different, related belief systems.

Considering the centrality of God within this definition, it’s easy to assume that pantheism is a kind of religion. However, there is a distinction between thinkers who embrace the spiritual characteristics of pantheism and those people who view it as a philosophical school of thought. Religious pantheists believe that God is the universe, and nothing is separate or distinct from it. However, non-religious thinkers prefer to think of the infinite universe itself as the great factor that binds everything together. Within this definition, Nature often takes the place of God.

There are some common characteristics among the many different kinds of pantheism. The ideas of ‘oneness’ and unity often appear in pantheistic philosophies. If nothing exists outside of God, then everything is connected to everything else through God’s divine being. Pantheism is also generally far less hierarchical than belief systems such as Christianity, since everything in the universe is infused with divinity (and therefore completely interconnected to everything else).

Giordano Bruno’s Understanding of the Universe

Another feature of many pantheisms is the concept of infinity. God is not restricted by any physical boundaries. Instead, God’s divinity extends outwards forever. While the idea of infinite space is familiar to many of us today, since we know so much more about the physical nature of the universe, in the 16th century such theories were considered deeply heretical.

During Bruno’s lifetime, the Christian universe was closed and finite. The Earth was in the middle of everything, surrounded by the sun, moon and the planets. Then came the ‘firmament’, a term which referred to a sphere of fixed stars that surrounded all of the solar system. And beyond the firmament, God encircled the Earth, planets and the stars in his divine goodness.

Bruno’s theories turned these ideas upside down. Rather than inhabiting a special realm outside the Earth, moon and stars, Bruno believed that God existed inside everything. The sun was in the center of the planets, not the Earth. There wasn’t simply one single solar system, but instead an infinite number of solar systems extending outward forever. Bruno refused to believe that God’s divinity could be restricted by any kind of physical boundary. Instead, he imagined a universe without borders: full of beautiful stars, shining suns and planets, just like the ones in our own solar system.

The Significance of the World Soul

So, what did Bruno mean when he said that God existed ‘within everything’? To understand this theory, we have to learn more about Bruno’s definition of the anima mundi or ‘World Soul’. This World Soul is an eternal substance that connects everything to everything else.

In his text On Cause, Principle and Unity (1584), Bruno describes how the World Soul animates every atom in the universe with its divine substance: “There is not even the smallest atom which doesn’t contain some portion of [soul] inside itself, there is nothing it does not animate.” He argues that this ‘spirit’ or soul fills every bit of matter in the universe with its divine and perfect being.

Bruno understood how difficult it would be for his contemporaries to understand such ideas. Even today, humans find it impossible to imagine infinity. After all, it’s not like we can see infinity – our eyes can only stretch so far! We can’t experience it either, because we only live for a finite amount of time on Earth.

Bruno acknowledges this difficulty in his writing. He says that we will never be able to ‘see’ the eternal World Soul enduring within all matter, forever. When it comes to the World Soul, our traditional ways of thinking about time, e.g., counting days and weeks, simply break down.

Really though, this is a good thing. Because if we were able to see and experience infinity, then that would mean we could understand the true nature of divinity. And that was a step too far, even for Bruno.

Scholars of Ancient Greece will recognize the term ‘World Soul’ from Plato’s philosophy. In the Timaeus Plato describes an absolute, eternal God alongside the World Soul which contained and animated the world. Bruno took these ideas one step further by developing this dualistic conception of the divine into a unified version that combined God and the World Soul together.

As science and philosophy continued to evolve, many people began to revisit Bruno’s theories on infinity. Some sources believe that Baruch Spinoza was likely influenced by Bruno’s pantheism. Other philosophers, such as Friedrich Schelling, connected Bruno’s pantheistic views with idealist philosophies of unity and identity.

Scholars today argue whether Bruno really was a true pantheist or not. But since there is no proper ‘one size fits all’ definition of pantheism in the first place, these discussions can be somewhat reductive. Bruno became fascinated by the idea of ‘oneness’ and unity between all things. He also clearly rejected orthodox Christian notions of God and replaced them with an infinite World Soul that infused all material objects with divine matter. If this doesn’t belong under the pantheism umbrella, then what does?