Marcus Aurelius is widely known as the philosopher-emperor, but he spent most of his life on the battlefield. 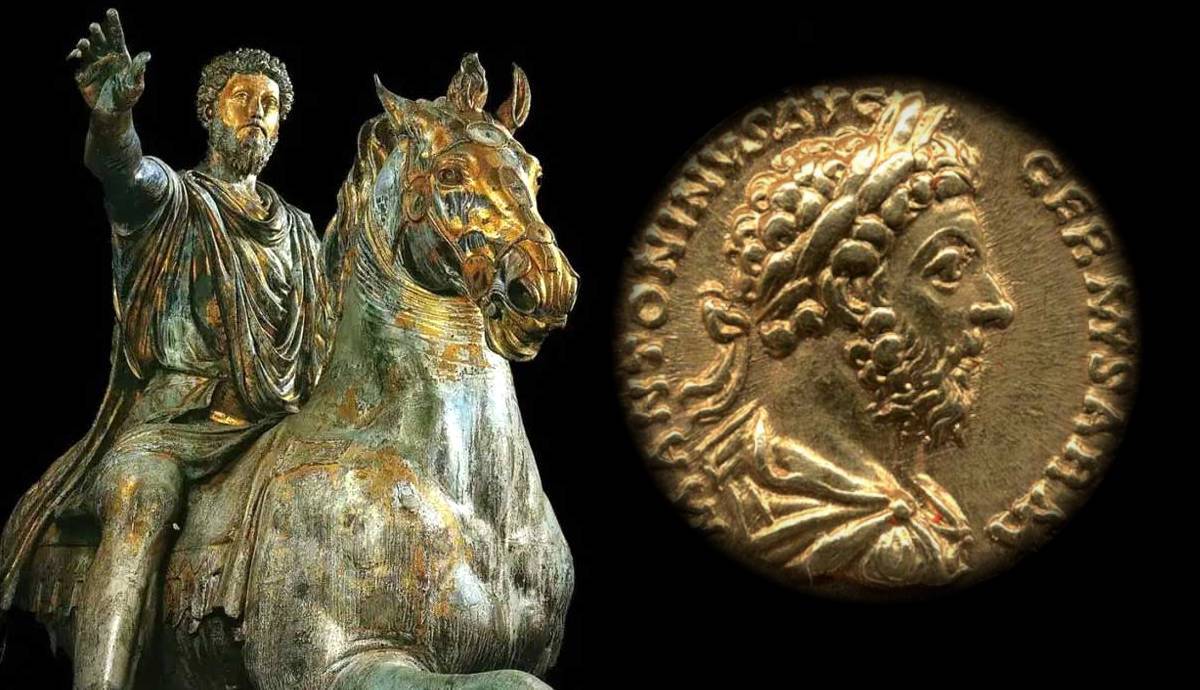 One of Rome’s most famous rulers, the philosopher-emperor Marcus Aurelius Antoninus is widely considered a model stoic, an ideal representative of virtue and manliness. Thus, it may come as a shock to many to discover that Marcus Aurelius, the author of the famous Meditations, spent nearly all his reign on the battlefield. Conflict with Parthia in the east, wars on the Rhine and the Danube in the north, and a violent uprising by one of his governors, threatened to plunge Rome into chaos.

On top of all that, a deadly pandemic outbreak took the life of his brother and co-emperor, Lucius Verus, devastated the Empire’s economy, and decimated the army. War and warfare followed Marcus Aurelius to his death. The emperor died in a military camp while campaigning against the northern barbarians. While his heir Commodus failed to follow the precedent set by his father, Marcus Aurelius’ efforts bolstered the frontier’s defenses and secured the Empire’s stability.

1. Marcus Aurelius Was Adopted into the Imperial Family

It might surprise you, but Marcus Aurelius was not predestined for the imperial throne. His father, Marcus Annius Verus, was from a noble Roman lineage and could boast of senators and consuls among his ancestors. However, he was not part of the imperial family. Following his father’s death, the three-year-old boy was adopted by his grandfather, who was close to the reigning Emperor Hadrian. Young Marcus caught the emperor’s attention quickly, probably owing to his grandfather’s high status at court.

From here, things went quickly. At six, Marcus was enrolled into the equestrian order, and at seven, the emperor introduced Marcus to the priestly college. Yet, the boy was too young for the purple. That honor was given to his uncle Titus Aurelius Antoninus, whom Hadrian also adopted. However, Hadrian had grand designs for the boy. Antoninus could take the throne only if he adopted Marcus and his adoptive brother Lucius Verus as his heirs.

While Marcus Aurelius is one of the best-known Roman emperors, he did not rule the Empire alone. When in 161 CE, the emperor Antoninus Pius died, Marcus and Lucius Verus took over in his stead. For the first time in its history, the Roman Empire had two emperors. Both Marcus and Lucius received a good education in Greek and Latin, spending their youth immersed in studies. While Marcus Aurelius developed a keen interest in Stoic philosophy and the works of Seneca, his ten-years younger adoptive brother was more of a poet.

At first, everything went smoothly. The transition of imperial power to the adoptive brothers was peaceful, secured by a traditional payment to the praetorian guard, the soldiers, and their officers. The first few months were quiet, allowing Marcus to immerse himself fully into philosophy. However, by the end of the year, the emperors had to face the first of many troubles that would plague Marcus Aurelius’ reign. The following year, Rome was at war with its powerful eastern neighbor, the Parthian Empire. While Marcus stayed in Rome, Lucius took command of the army, leading the legions during the five-year-long conflict.

3. He Had to Confront the Deadliest Plague in Rome’s History

The Parthian war ended with a Roman triumph. Victorious, Lucius’ army brought back to Rome wagons full of gold. Yet, unbeknownst to the emperors and their subjects, the jubilant legionaries also brought an invisible and lethal enemy. Sometime in the late 160s, a deadly pandemic — known as the Antonine plague — struck Rome, spreading quickly to all corners of the vast realm. Then, in 169, Lucius Verus fell sick and died, probably a plague victim. Marcus Aurelius was now the sole emperor of the Roman Empire. Unfortunately for the philosopher king, he also inherited a state of chaos.

The Antonine Plague (probably smallpox) devastated the Empire. According to Cassius Dio, a contemporary eyewitness, there were up to 2,000 deaths daily in Rome. Modern historians believe that 5 million people died from the disease, although the number could be as high as 7-10 million. Enormous losses weakened the Roman Empire, hitting the economy hard and devastating its army. Even the emperor Marcus Aurelius fell ill, provoking a political crisis, and bringing the Empire to the brink of civil war.

4. Marcus Aurelius Had to Deal with a Dangerous Revolt

While the plague ripped through the Roman Empire, a rumor spread that the emperor himself had died. Allegedly fearing for the Empire’s security, in 175, the governor of Roman Egypt — Avidius Cassius — declared himself emperor. Although Cassius soon discovered that the emperor’s death was just a rumor, he remained committed to his cause. After all, he was now an attempted usurper. Always a Stoic, Marcus Aurelius was devastated by the news of Cassius’ betrayal and implored his friend to rethink his course of action. He even ordered his troops to capture Cassius and not harm him.

But Marcus was not afforded this opportunity to show mercy. As his legions were about to depart to Alexandria, news reached the court of Cassius’ death. A centurion named Antonius had stabbed Cassius in the neck and then cut off his head to present to the emperor. Marcus Aurelius refused to look at the head and had it buried. He also ordered all the correspondences of Cassius  burned. Everyone who supported the usurper was pardoned. Marcus’ generosity was a result of his stoic way of life. In truth, he had more pressing issues to solve. Cassius’ rebellion diverted his attention from a real threat — the barbarian invasion to the North.

5. The Worst Threat Rome Had Faced

At the same time Lucius Verus was waging war against Parthia in the East and while the Antonine Plague made inroads into the Roman Empire, trouble was stirring in the North, beyond the large rivers, the Rhine and the Danube. The arrival of a large group of people (most notably the Goths) in Central Europe put pressure on those living closer to the imperial frontier. Once again, Rome was at war. The Marcomannic Wars were a series of protracted conflicts fought between the Romans and various Germanic tribes, including the Chatti, the Quadi, the Sarmatians, and the Marcomanni.

While the Roman legions managed to defend the limes from barbarian raids in the initial phase of the conflict, the increased barbarian attacks and the ill-manned imperial defenses due to the plague, led to a catastrophe. In 169, the Germanic warriors crossed the Danube and inflicted a heavy defeat on the Romans at the Battle of Carnuntum. More than 20, 000 Romans perished in the battle, leaving the road to Italy open. Marching into the Po Valley unopposed, the barbarians plundered and razed Opitergium (Oderzo), and laid siege to the major Italian city of Aquileia. Not since the days of Hannibal Barca had Rome experienced a foreign army so close to home. Eventually, Marcus Aurelius reconsolidated the Roman forces and pushed the enemy back. By late 171, the legions, personally led by the emperor, managed to restore control over the Danube limes.

6. A Miracle Saved Marcus Aurelius and His Army

In 172, the war continued with a Roman counteroffensive. Marcus Aurelius was awarded the title Germanicus, and coins were minted to commemorate his triumph. Yet, the war almost went south. While campaigning deep in enemy territory, the Twelfth Legion, “Fulminata” (“Thundering”), found itself under attack by a large Quadi force. Surrounded and without water, the legion faced certain destruction. However, when disaster seemed inevitable, a sudden torrential thunderstorm saved the Romans. While the legionaries satiated their thirst, lightning struck the Quadi. So important was the “Rain Miracle,” it is depicted on the Aurelian Column, still standing in Rome as a witness to the grand victory.

By 174, the subjugation of the Quadi was complete, and the imperial army defeated the Sarmatians the following year. Finally, a favorable treaty with Iazyges brought peace. When in 176, Marcus Aurelius returned to Rome to celebrate his triumph, it was the first time he had seen the capital in 8 years. However, the scholar emperor was not destined to stay in Rome for too long. His fate led him to the battlefield one last time.

Marcus Aurelius spent most of his twenty-year long reign waging war. In fact, Marcus’ “Meditations,” the emperor’s most famous work on the tenets of Stoicism was written in the environs of a military camp. Besides leading the army to battle, the emperor did everything he could to ensure a smooth and peaceful imperial succession. Following Cassius’ failed grab for power, the emperor accelerated the promotion of his son and successor, Commodus. In 177, Marcus declared Commodus Augustus. He now had the same status as his father, formally, if not in reality. Commodus was also made consul, becoming the youngest person in Roman history who held that prestigious office.

The next three years, the emperor spent beyond the Danube limes fighting the rebellious tribes in their territory. It was there he met his end. Following another great victory over the barbarians, the emperor fell ill. In 180, Marcus Aurelius, the last of the “Five Good Emperors,” died at the Danubian legions’ military headquarters at Vindobona (modern Vienna). Deified and cremated, his ashes were sent to Rome and laid to rest in the Mausoleum of Hadrian. Commodus was now the emperor of Rome.

Hadrian’s Villa: A Palace Fit for an Emperor