Here are 6 differences between the reality of medieval sieges and how Hollywood depicts them. 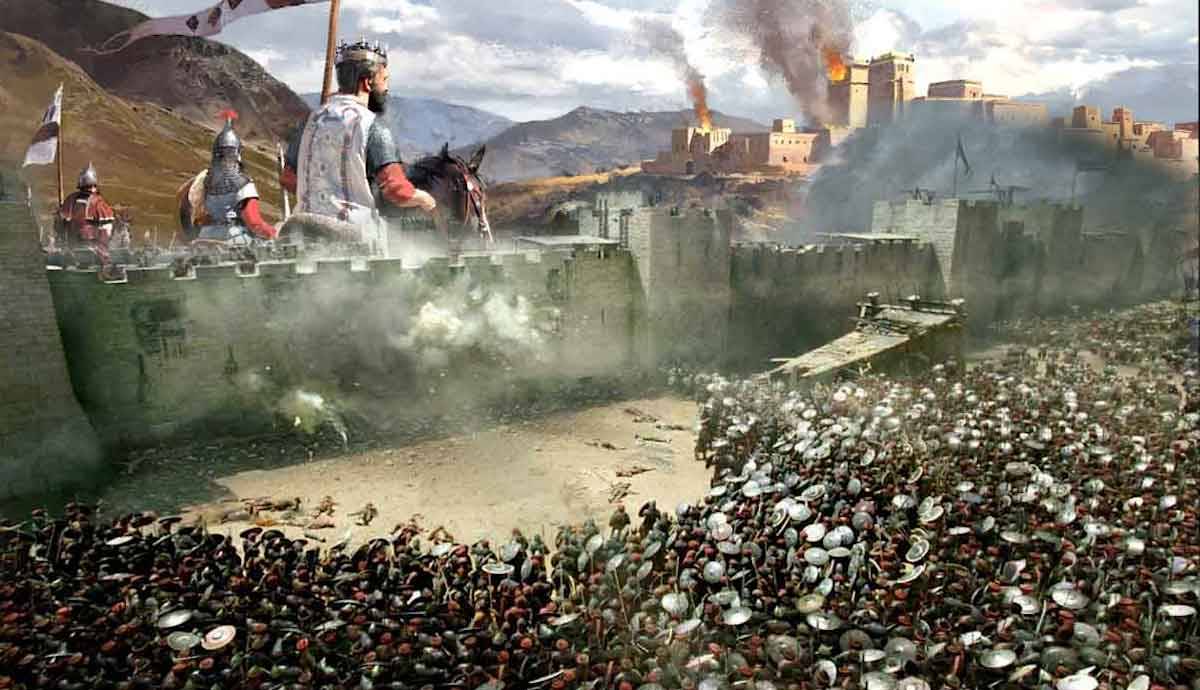 Medieval sieges are a common sight in Hollywood movies. From Ivanhoe (1952) to Robin Hood (2010) and beyond, Hollywood has portrayed the event countless times, and each time it has been a spectacular visual for the audience. But as in many things, Hollywood often gets things wrong, sometimes deliberately, for the sake of creating something spectacular. Tropes are created, copied, and continued through the decades, and have an effect on the idea in our minds that is often far from the truth.

In reality, medieval sieges were quite different from their Hollywood portrayals. Here are 6 examples of where Hollywood gets it wrong.

Digging ditches was, by far, the most common activity conducted by any defender before any medieval siege or battle. While Hollywood often uses ditches in scenes involving open combat, rarely do we see ditch-digging by the defenders before a castle is besieged. What is usually portrayed in movies is clear, flat ground right up to the castle walls. Siege towers, battering rams, and soldiers can run right up to the walls and start working at the defenses. This makes it easier for the film to keep the scene engaging for the viewer.

In reality, the dangerous task of filling the ditch would have to be performed before any attacker could get close to the walls. To make things worse, ditches were sometimes filled with wooden stakes, making the idea of attack an even more deadly and difficult affair. And if water was present, the ditch would become a moat. Moats were extremely unhygienic and even the smallest time spent in one would likely present the swimmer with a serious bout of cholera or dysentery which he would take back to the camp when he returned.

Nevertheless, Hollywood tends not to depict ditches in siege scenes. In reality, they were always present, long before any siege could take place. Ditches were part of a prepared defense constructed along with the castle.

This is a Hollywood trope for which there is very little evidence in the historical record. Simply put, it’s mostly made up. While throwing pots of boiling oil might have happened on a few occasions, it was certainly a very rare occurrence in medieval sieges. Oil was expensive and handling a pot of boiling oil on the ramparts was needlessly elaborate and risky for the defenders.

Olive oil, however, was sometimes used to make the siege ladders slippery and it wasn’t necessary to boil it first. When it comes to throwing stuff down at the attackers, large rocks and bits of masonry were the most common choice, but virtually anything and everything that could be lobbed at the attackers was used, including human and animal corpses, and even excrement. There are also plenty of recorded instances of boiling water, pitch, quicklime, and hot sand being used. Getting hot sand in your armor would have been an extremely uncomfortable experience.

The problem with medieval sieges, as depicted in Hollywood, is that virtually all of them involve attackers trying to scale the walls with ladders. This is when things would be tossed down at them. Although this is indeed a common depiction in medieval art, using ladders to scale walls was not a common occurrence. Even with many ladders, each attacker would still arrive at the top one at a time, a very risky proposition for any soldier as it is near suicidal, given the soldier would likely be outnumbered, and still be in a very disadvantageous physical position even if he did manage to avoid the perils of rocks, hot sand, and boiling water.

Hollywood, and video games, often portray encamped armies housed in rows of tents bedecked in the colors of the nation they are fighting for. These wide-angle shots show these cities of tents stretching far off into the distance in aesthetically pleasing uniformity. This trope is apparent among encamped armies anywhere, including armies engaged in besieging a castle or city.

The reality is a bit messier. Tents were expensive, and each soldier was mostly outfitted out of his own pocket. A modest tent could cost as much as half a year’s pay for the average infantryman. Soldiers who had to buy their own gear usually spent their money on arms and armor first. Tents were a luxury and were typically used by those who could afford them; thus, in the encampment, the soldiers with tents would have usually been knights and nobles, and they certainly would not have all looked the same.

Common soldiers had to make do with building their own shelters out of what was available on hand. Some soldiers simply dug foxholes. Modest billeting like this was a fact of everyday army life for the entire medieval age and even into the first few decades of the Renaissance.

This situation, in most cases, was one that was protracted and ultimately led to issues of sanitation. As such, diseases like dysentery were common, and soldiers in a besieging army were likelier to die of disease than direct action with the enemy.

Siege towers were a common aspect of medieval sieges, which Hollywood rightly depicts often. But what Hollywood gets wrong is how they were actually used most of the time. In movies, we often see siege towers being pushed right up to the defenders’ walls, at which time, a drawbridge drops down from the tower, and attacking soldiers pour out onto the ramparts. This is certainly not inaccurate, but in order to be able to do this, a siege tower would likely have to be positioned over an area where a defensive ditch has been filled in. Hollywood never shows the excruciatingly long and dangerous work that goes into filling a ditch. Indeed, as previously mentioned, Hollywood never depicts the ditch at all.

The presence of ditches in reality, however, means that siege towers were generally used in a different way. The most common tactic was to push the siege tower as close as possible to the defenders’ walls. From that position, archers at the top of the siege tower would have a height advantage over the defenders.

What Hollywood does get right, however, is the look of the tower. They are often depicted as being covered with leather on the front and sides. This is because siege towers, made of wood, were susceptible to being burnt. To counter this weakness, siege towers were generally covered in wet leather.

Throwing rocks and other objects using artillery was indeed a common practice in medieval siege warfare. What Hollywood often gets wrong is where trebuchets and catapults aimed and their effects. As far as the targets were concerned, Hollywood concentrates on using catapults and trebuchets to knock down defensive walls (which suddenly crumble). In reality, most projectiles were flung into the city to cause damage and demoralize the enemy. These included not just rocks but also fiery projectiles and dead animals to spread chaos and disease.

Castle and city walls were thick and sturdy and could generally withstand bombardment from even the biggest siege weapons. Breaches were uncommon. Hollywood likes to depict walls suddenly crumbling after being hit several times. This is highly inaccurate. While there is evidence of walls crumbling due to artillery bombardment, these instances were extremely rare and mostly against walls made of mudbrick.

One exception is the Siege of Stirling Castle in Scotland in 1304, when the English army, under the command of Edward I, managed to breach the castle walls with the biggest trebuchet ever built (which was named “War Wolf” or Loup de Guerre). A contemporary account claims the trebuchet “brought down the whole wall.” When catapults and trebuchets were used against castle and city walls, the attackers usually aimed to break the top of the wall to render a section of the rampart indefensible. Creating a breach this way would need successive bombardments of the top of the wall, working the way down.

6. The Overuse of Flaming Arrows and Archery

While fire arrows and other projectiles were undoubtedly used in medieval sieges, their use wasn’t nearly as common as Hollywood depicts. Fire was dangerous, especially with hundreds of troops each controlling their own fire at the tip of their arrows. Mistakes were likely to be made, and some mistakes could be disastrous. The Byzantine Empire, however, did use a substance called “Greek Fire,” which was an early form of napalm, but this was generally reserved for naval battles.

As for firing the arrows, the person in charge certainly did not yell “fire!”. This word wasn’t used until after the widespread use of muskets. The correct terminology for arrows is “nock” (to load the arrow), “draw,” and “loose.” Many Hollywood scenes have the archers draw the bows and then stand there waiting for the command to “fire” or “loose.” However, they wouldn’t have been able to hold a bow in a drawn and aimed position for longer than a few seconds at best. The draw weight of a war bow is between 100 to 200 pounds; it’s simply not possible. English longbowmen may have been able to hold the bow in a drawn position for a few seconds since they were trained from a very young age and had extremely powerful arm muscles, but the “draw” and “loose” phase was generally done in one movement.

Summary: The Development of Medieval Sieges in Hollywood

Most medieval-themed movies tend to be a mixed bag of inaccuracies. Depending on the nature of the audience, directors aim for authentic depictions, but certain things don’t make for good viewing. An accurate depiction of a medieval siege would certainly not be the spectacle that audiences expect from Hollywood. In the name of entertainment, tropes are created that persist today and give us a skewed idea of what history was really like.

Utterly Impregnable: Castles in Europe & How They Were Built to Last