HomeArtistsTraumatized by World War I: 10 Facts & Works by Otto Dix

Otto Dix is a German artist who was influenced by 20th-century warfare. His works remain in the history of art seen as "documents of truth.” 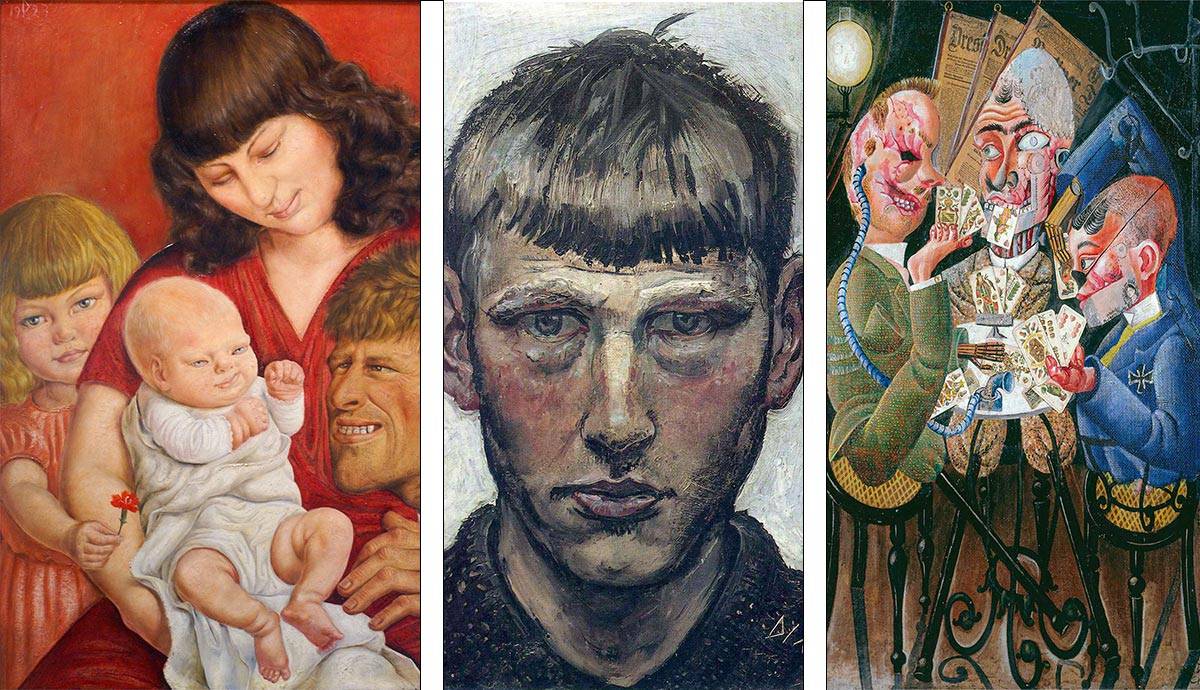 Otto Dix is one of the best-known German artists of the 1920s. In his artworks, he depicted scenes of corruption and social apathy of German society with uncompromising frankness and vibrant immediacy.  When the war began, he volunteered to serve as a machine gunner and suffered serious wounds. After the horrible atrocities that he witnessed during World War I, he got connected with Dadaists and later became part of the New Objectivity movement. Dix became preoccupied with subjects like sex work, sadomasochistic rituals, murders, street battles, urban decay, and poverty. Here are 10 facts you should know about Otto Dix.

1. Otto Dix was Born in Gera

German painter and engraver Wilhelm Heinrich Otto Dix was born  in December 1891. He was the eldest son in a working-class family. His father toiled in a foundry and his mother was a seamstress. Dix showed an interest in creating art at an early age and was encouraged to be creative. He spent time in the studio of his older cousin, the landscape painter, Fritz Emin, and there he found his inspiration to finally become an artist himself. When he was 14 years old, he began taking art and decoration lessons in his town’s art and crafts school. From 1906 to 1910 he was an assistant to the painter Carl Senff and began painting his first landscapes.

2. Dix attended the Saxon School of Arts and Crafts

In 1909, Dix was 18 years old and he decided to leave home for Dresden. He had been accepted into the Saxon School of Arts and Crafts, where he acquired a proper education in figure drawing and historical painting. There, he was deeply influenced by the printmaker Max Klinger, Nietzsche, and Goethe. He would later claim that these people were the most important sources of inspiration that helped him shape his work.

As a German Expressionist and Dadaist at first, the German artist experimented with various trends in Modern art, until he found his own artistic style. Later on, he became one of the main representatives of the Neue Sachlichkeit (New Objectivity) movement, which, in eccentric yet convincing forms, unmasked the degradation of the Weimar society and culture.

3. He saw the atrocities of World War I

In 1914, a then very patriotic 23 years old Dix, joined the military to defend his country in World War I. First, he joined as a volunteer, and he remained a machine gunner until the end of the war. Otto Dix spent over four years on the front lines, where he gathered highly intense impressions. During his time in the war, he was injured five times and witnessed horrors that he couldn’t have imagined before. He achieved the rank of sergeant and earned the Iron Cross second class. As he was a painter, he took with him into the war sketch pads and produced more than 600 sketches of his experiences in the war.

In his painting called Prager street from 1920, Otto Dix demonstrates the social life in Germany after WWI. He paints images referring to the industry of prosthetics. The veterans and thousands of injured people who have gone through the war are the victims. He is suggesting that the German people should avoid getting back to wars, highlighting its catastrophic effects on society.

4. He Created a Series of 50 Etchings Referring to WWI

In 1924, Dix turned to illustration to show the devastation of the trench warfare he had experienced, creating a series of etchings depicting the horrors and trauma of warfare. He published fifty intaglios entitled Der Krieg (The War), in which the German artist portrayed the destructive effects of war, as well as its dehumanizing impact.

Because of the atrocities of war, the German artist was often plagued by nightmares and intrusive thoughts that correlated with what we now know as the post-traumatic stress disorder.  Perhaps, he has been more influential than any other German artist in shaping the image of the Weimar Republic in the 1920s. Not only did he manage to visualize this experience of war but he also transformed his trauma into art.

5. He Captured the Socioeconomic Situation of the Weimar Republic

Defeated in WWI, Germany was broken. There was mass unemployment, political extremism on both ends of the spectrum, and inflation. It was during this tumultuous climate that the Weimar republic was born, in an era of misery and glamour.  Sex workers, injured war veterans, satirical depictions of the intellectual elite, were all symbols of a society that was morally and physically decayed.

By the mid-1920s, the German economy had begun to stabilize thanks to the loans coming from America. It was at this time that the Weimar republic entered its so-called golden years. The economic revival saw many seek out new forms of leisure and entertainment such as the Weimar cabaret, which represented a seductive underworld with its permissive approach to gender, sexuality, and ethnicity. However, the gap between the rich and the poor continued to become greater. It was this cultural explosion that the German artist captured in his paintings.

In his well-known triptych called Metropolis, Otto Dix depicted the cabaret life of Berlin. During the 1920s, the city itself was known for being decadent. Sex work, homosexuality, and new social behaviors were challenging traditional norms of the past.

On the left of the painting, there is a wounded soldier with two peg legs growling at a couple of sex workers, looking at them with either disapproval, lust, or understanding. On the right panel, there are more sex workers, while at the bottom there is a legless beggar who salutes the girls as they pass by. In the central panel, Dix portrayed the upper class of the Weimar Republic, while on the side panels, we see the lower classes. By placing these three different classes right next to each other, Dix is showing the gap between the two basic classes of people, the extremely wealthy and the extremely poor.

In 1925, his works were included in the exhibition “New Objectivity. German painting after Expressionism’,’ held in Mannheim. This representative art movement emerged in the 1920s, as a reaction to Expressionism. Otto Dix, among other German artists who survived the war, documented the interwar years.  Together with the leader of the Berlin Dada movement, George Grosz, he became part of the New Objectivity movement. This was a form of social realism that examined the intoxicating decadence but also the underlying social inequality of the post-war German period.

One example of a work of the New Objectivity movement is the portrait of Dix’s family.  Shortly after the birth of Otto Dix’s son, Ursus, in 1927, the family moved from Berlin to Dresden. There, he became a professor at the Dresden Academy of Fine Arts.

Dix painted this family portrait in the late medieval style, used for depicting the Holy family. His wife Martha is placed at the center, which is normally associated with Virgin Mary, holding their son, Ursus, on her lap. The artist himself is seen coming from the right painted in the position often associated with Joseph. Otto Dix presents a portrait of his family and himself which is not merely exaggerated but almost grotesque-looking.

7. He Explored Women’s Roles in the Weimar Society

In the 1920s, Berlin was quite a vibrant city filled with flamboyant characters. The Portrait of the Journalist Sylvia von Harden made by Otto Dix in 1926 is the result of their meeting at the Romanisches Café. Dix saw in Von Harden a representation of the entire epoch, a time when the Neue Frau (New Woman) came to be. Her short hair, flat chest, large tentacular hands, monocle, facial expression, slipping stockings were all putting her at odds with the traditional idea of a discrete and virtuous woman.

It’s been historically considered that women were painted seen through the male gaze. But Dix interprets woman’s beauty in a different way, thus he painted von Harden as she was, not particularly attractive to the viewer. The strength of this portrait doesn’t reside in Sylvia’s appearance but in her actions and attitude. She’s drinking and smoking with one arm hanging in the back of the chair, lost in thought. The portraits that Dix left behind, not only show the chaotic period in which he lived but also address something universal by presenting us with the human condition.

World War I was a defining experience for Dix, thus in 1923, he completed his painting named The Trench, as a protest against the horrors of war. He used his art as a form of protest against the physical and emotional damage that war causes. Otto Dix would return to this subject repeatedly throughout the 1920s and 1930s, each time aiming to make a high-profile contribution to the ongoing public debate about the meaning of the war.

In 1932, Dix completed another work entitled The War (Der Krieg), a large composition consisting of four panels. One of his best-known paintings, The War, captures the devastation of WWI. It represents death and decay awaiting the soldiers. The idea in this work is to show the brutality and insanity of the war through shockingly realistic depictions of the wounded and dead soldiers.

9. Dix Became a Target of the Nazis

In the 1932 elections, the Nazis became the largest party, and within a year Hitler was in the Third Reich. Like many modern artists, Otto Dix became a target of the Nazis. The new regime removed Dix from his position as a professor at the Dresden Academy. With Hitler’s rise, Dix’s art was declared degenerate, his work was condemned by the Nazis, confiscated, and included in the exhibition of degenerate art (Entartete Kunst) held in Munich. The Nazis did not like the idea of paintings that might turn people against the war. The centerpiece of the exhibition was Otto Dix’s painting The Trench. In 1938, 280 of Otto Dix’s works were seized by the German museums, so he became a victim of Nazi mania against modern art.

Dix was conscripted into Volkssturm, the last resort of the Nazi party to halt the refraction of coalition troops on the territory of Germany. Men from  16 to 60 years old were forced to join the German Army. Otto Dix was captured by French troops as the Reich collapsed and imprisoned in a camp. Eventually, he was released in February 1946 and returned to Dresden.

His own contribution to highlighting the horrors of the war, along with those of other artists who had also lived through it, did not prevent the outbreak of World War II, unfortunately. After WWII, Dix gained recognition in both East and West Germany. His works act as a poignant reminder about the importance of artistic expression through hard times in history. Otto Dix continued to work until his death in 1969.

What Is the Dada Art Movement?

Christian Schad: Important facts about the German artist and his work