HomeStoriesPaul Deschanel: The French President Who Fell Out of a Train

Paul Deschanel: The French President Who Fell Out of a Train

Paul Deschanel was a French political figure who was an important parliamentary leader during the Third Republic of France. He served as its 11th president for only seven months. 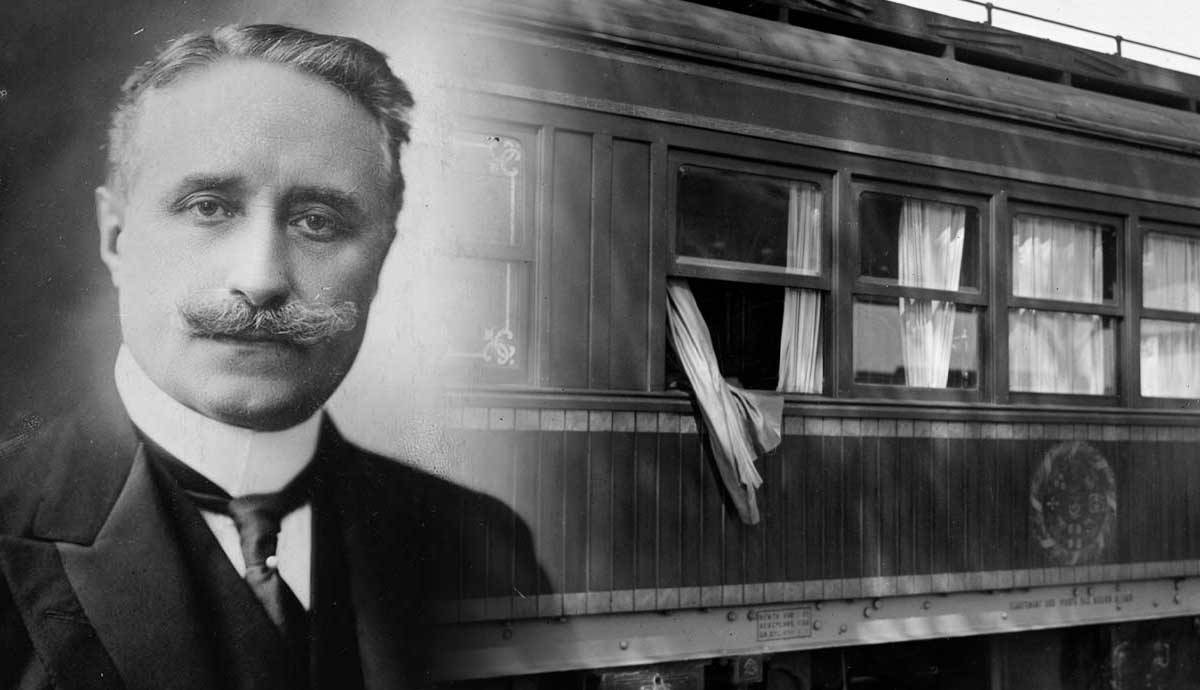 Paul Deschanel’s brief presidential term was marked by ministerial instability within the country and his own deteriorating health, which forced his resignation on September 21, 1920. Anxiety, mental exhaustion, and sleep intoxication also unintentionally caused him to fall from the moving train on May 23, 1920, near Montargis. The fall immediately entered into legend, from which the president’s fate was essentially sealed.

Paul Deschanel was born in Brussels, Belgium, in 1855. This makes him one of the two French presidents whose birthplace was not France. (The other one is Valéry Giscard d’Estaing, who was born in Koblenz, Germany). Young Paul Deschanel was Victor Hugo’s godchild and grew up in Paris, where his family returned after Napoléon III proclaimed the amnesty in 1859. Deschanel studied at the Collège Sainte-Barbe-des-Champs in Fontenay-aux-Roses, the Lycée Louis-le-Grand, and the Lycée Condorcet in Paris. He graduated from the École Libre des Sciences Politiques and the Faculty of Law of Paris and completed his military service in Paris in 1873.

In the early years of his career, Deschanel worked as a secretary to Deshayes de Marcère and Jules Simon from 1876 to 1877. In 1985, Paul Deschanel was elected as a deputy for Eure-et-Loir and became notable as a progressive orator of the Republican group. In 1886, he was appointed as the vice president of the Chamber. By 1905, Paul Deschanel was publicly known for his struggles against the left and as a supporter of the law on the separation of church and state. In 1911, he was appointed president of the Committee of Foreign Affairs.

On May 23, 1912, Paul Deschanel was elected president of the Chamber. He made significant contributions as the national orator during World War I, openly opposing Prime Minister Georges Clemenceau and accusing him of corruption. It is believed that the tension between the two politicians intensified to the extent that it resulted in a fighting duel on December 23, 1892. Six shots were discharged, but neither participant was injured.

Path to the Presidency

Paul Deschanel aspired to an active role on the path toward the French presidency. The political environment was tense at that moment. France held its first general election in November 1919. The center-right parties formed the Bloc National Républicain to enforce the Treaty of Versailles that ended World War I, supporting the notion of l’Allemagne paiera, “Germany Shall Pay,” compensating war victims, and defending “civilization against Bolshevism.”

The strikes in France in the first few months of 1919 were also in the Bloc National’s favor. The majority of the Radical and Socialist parties were soundly beaten by the Bloc National, which claimed two-thirds of the seats. The Radicals lost half of their Representatives, while the Socialists saw an increase in representation. Three hundred sixty-nine of the 616 Representatives, including Paul Deschanel, were new to their positions.

Since representatives from Alsace-Lorraine were present in the Palais-Bourbon for the first time since 1870, the new session of Parliament began in a very cooperative and patriotic tone. The German Empire had seized the region of Alsace-Lorraine from the Second French Empire in the Franco-Prussian War and the Treaty of Frankfurt in 1871. For the selection of the President of the Republic, the cooperation disintegrated, nevertheless. Without even being a formal contender, Georges Clémenceau, the architect of the victory, thought he would easily win.

The Parliament, however, didn’t trust him. It was thought that Georges Clémenceau would be an extremely autocratic leader who would dominate the republic, which was the role of the Parliament at that time, not the president. Aristide Briand, a prominent political figure in the French parliament, suggested Paul Deschanel as a more suitable choice for the presidency and also reminded the Catholic representatives of Clémenceau’s strong disbelief in religion.

As a result, Paul Deschanel was elected as the 11th President of the Third French Republic on January 17, 1920, to serve a seven-year term. However, Deschanel’s mental health quickly deteriorated as he had dementia. In May 1920, the President fell out of the window of the Presidential train near Orléans.

Even though Paul Deschanel started his presidential path with high hopes, he could not put the ideas into practice nor several embarrassing incidents, including the notorious train tumble, behind him.

The train journey on a luxury Orient Express on May 23, 1920 appeared decisive in ending Paul Deschanel’s presidential career. A detailed story can be found in the book Les Trains des Rois et des Présidents (The Trains of Kings and Presidents) by Jean Des Cars and Jean-Paul Caracalla, published in 1992.

On a Sunday evening, President Deschanel was traveling to the Loire to the inauguration of a monument to the dead of the Great War with the Ministers and the Press representatives. At about 10 PM, the President took a sleeping pill and retired to his room. According to the book, Mr. President became hot, opened the window but leaned out too far, and eventually fell out of the moving train. Still under the influence of the sleeping pill, he lost his balance. The train was traveling at 30 kilometers per hour near the freshly-raked sand from track repairs, and the President did not suffer any severe injuries.

Before midnight, while inspecting the railway tracks, a railway worker, André Radeau, saw a man approaching him. The stranger was barefoot, bruised, and bleeding, dressed in luxury embroidered pajamas. He claimed to be the President of France, to which the unimpressed railway worker replied, “And I am Emperor Napoleon.” Not sure whether he met a drunk or an escapee from the nearby asylum, Mr. André Radeau took President Deschanel to the closest house, put him to bed, and called the doctor. The doctor recognized the President of France, and by 7 AM, Deschanel was sent to the hospital. After about two hours, it was already clear that the President was missing from the train and found safe in the hospital.

This incident caused different reactions among Paul Deschanel’s colleagues, journalists, and the wider public. Some believed the story; some did not. What is clear is that the incident created a rich vein of materials for satirical writers and cartoonists. Paul Deschanel entered history by becoming the first President of France–or any other country–to fall out of the train.

However, the train incident is not the only case President Deschanel caused both astonishment and sympathy from the French public. On April 5, 1920, President was on a trip to the Alpes-Maritimes, where a banquet was served in the hall of the Casino building in Nice. Paul Deschanel gave a beautiful speech in front of the public with a theatrical attitude, expressing his fascination with Nice and the people residing there. Applause greeted the speech. Excited by the reactions and his triumph, the president repeated the speech in extenso, word-for-word.

Again, on September 10, 1920, at 6 AM, Paul Deschanel was seen bathing, completely naked, in a basin of the castle of Rambouillet.

The Legacy of President Paul Deschanel

From the beginning of his political career, Paul Deschanel became a passionate orator and member of the Progressive Republicans, constantly outlining the issues of social and foreign affairs. Paul Deschanel’s brilliant skills in philosophy, law, and literature helped him to author several books on politics and literature, including La Question Sociale (1898), Orateurs et Hommes d’état (1888), Essai de Philosophie Politique (1899), and Gambetta (1920).

His academic credentials and previous rich political experience made Deschanel a perfect and better-qualified candidate for France’s presidency in the 1920 presidential elections, winning over the famous and influential Georges Clémenceau. As Paul Deschanel himself was a longtime death penalty opponent, he was the only President of the French Republic during whose term in office no one was executed. (Eventually, the death penalty was abolished in 1981 in France.)

However, Paul Deschanel could not accomplish his ambitions and aspirations as a president. His health deteriorated over time, and stumbling along a railway track in his nightwear ended his presidency only in seven months instead of seven years as the incident provided rich materials for media representatives, satirical writers, and political cartoonists. Headlines varied from genuine concern to mocking disbelief in Paul Deschanel’s deteriorating mental health. Ultimately, his resignation was offered on September 21, 1920, and Premier Minister Alexander Millerand succeeded.

Paul Deschanel was sent to a convalescent home at Rueil-Malmaison for three months. Shortly after leaving the facility, he was elected to a senate in January 1921 and served until his death from pneumonia in 1922.