Born out of competition and intense racism, the Russo-Japanese War showed the world that the Japanese Empire was more than a match for any European power. 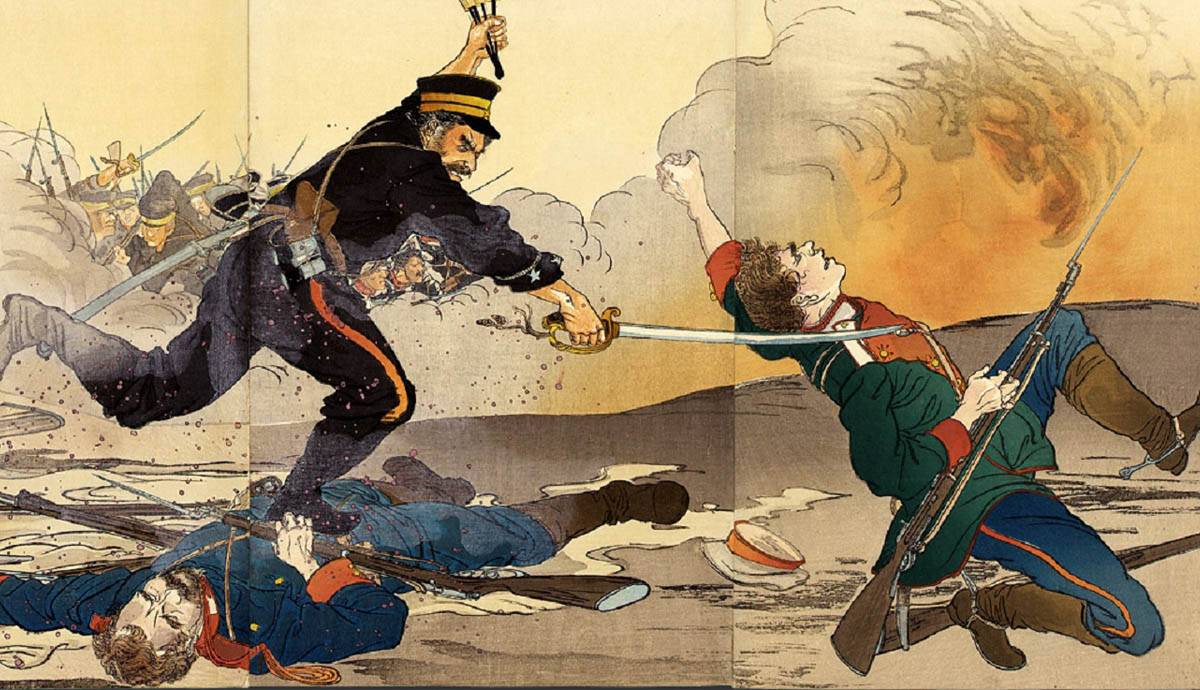 At the beginning of the 20th century, the Eurasian superpower Russia found itself in conflict with the newly rising Japanese Empire over interests in Korea and a weakened China. For decades, European nations had held unparalleled hegemony over the rest of the world, with powers as minor as Belgium controlling untold swaths of foreign land. This long-held power and consequent deeply-ingrained racism would stall talks and interrupt diplomacy with the rising Japanese Empire from the onset. While engaging with diplomacy in bad faith, Russia was still certain that Japan would never engage in a war with them and, if they did, their own superiority, along with the support of other “white Europeans” in combating this “yellow menace” would ensure victory in the event of war. They would be proved disastrously wrong. With the outbreak of the Russo-Japanese War, the world would see just how capable the Japanese military was.

The Regional Tensions of the Russo-Japanese War

The origins of the Russo-Japanese War can be traced back to the Meiji Restoration of 1868, some four decades before the conflict. Prior to this, Japan had existed in a state of isolationism and feudalism under the Tokugawa Shogunate since the unification wars roughly three centuries earlier. With the Restoration, the nation of Japan almost overnight shifted into the highly modernized and advanced Japanese Empire.

Following a western model of modernization, industrialization, and political reform, Japan quickly established itself as a rising regional power, free from the influence of any European administration. With this dramatic shift came a change in worldview; their national ambitions started to mirror the world’s great powers. This meant that much of what Japan saw as required for prestige and advancement on the global scale needed two things: overseas colonies and many natural resources.

But Japan was late to the party. By 1890, when much of its modernization had come into its own, much of the world’s territories had already been “claimed” by other world powers, seized through direct colonization and annexation, or through spheres of influence. To make matters worse, Japan’s recent modernization limited the distance at which it could establish itself abroad, leaving it with even fewer options for expansion.

Thus, Japan found itself in conflict with Russia, who, while not possessing overseas territories, still maintained an immense landmass stretching from the Baltic to the Pacific Ocean and was in the process of solidifying its presence in the far east of its borders. Both nations were brought into conflict over Korea and north-eastern China, known as Manchuria. By this point, a fair amount of racism likewise affected how both nations viewed these areas.

In the case of Russia, it often considered itself a bulwark to Europe, perpetuated by the intensely racist “Yellow Peril” ideology that was widely perpetuated in Europe at the time. As such, any cause they pursued in the region, especially as a means to strengthen their own borders, was considered a noble and just cause. Meanwhile, there was surprisingly little difference between the prejudices carried by Europe and the Japanese Empire. Despite being on the receiving end of this racist ideology, Japan used similar tactics to vindicate its territorial ambitions, believing that both Korea and China were inferior. Their refusal to adapt to industry and modernize at the same speed as Japan had meant that they deserved to be conquered and exploited in a sort of national-scale expression of social Darwinism. Both countries were entirely ready to disregard not only each other but the people whom they intended to fight over, all in the interest of self-advancement.

The Japanese Empire and Europe: Conflict In Asia

The first true test of the newly-modernized and expansionist Japanese Empire came a decade before the Russo-Japanese war in 1894. For the past century, China had been suffering what was known as “The Century of Humiliation.” Incessant encroachments by western imperialist powers had gradually chipped away at the once almost mythical prestige of the Qing Dynasty. More and more European powers exerted their control, influence, and demands on China, receiving more and more access to lucrative economic markets previously off-limits. They could even be “leased” entire cities or regions.

Meanwhile, Japan sought far more than simple market access and foreign ports. Their ambition led to a conflict over Korea with China, who, despite being severely weakened, was still considered a main regional power.

The First Sino-Japanese War was a humiliating defeat for China and the opportunity for Japan to prove itself as the dominant regional power. Japan gained Taiwan, its first overseas territory, as well as Korea, which Japan absorbed into its now-expanding sphere of influence. While the Liaodong Peninsula was meant originally to be ceded to Japan, Russia, with the help of Germany and France, forced Japan to abandon its claims to the area and surrender these new Chinese colonies to Europe, which the Russians would make good on five years later with the establishment of Port Arthur in Liaodong.

The Russo-Japanese War would have likely been impossible if not for a huge amount of underlying racism. During the later half of the 19th century, Europe increased its involvement in China, specifically through harsh treaties and trade agreements. While the powers of Europe knew that China was simply too large to conquer and rule directly, there was still ample wealth that could be extracted from east Asia. This led to the creation of the “Yellow Peril,” an intensely racist campaign made to dehumanize East Asians and vindicate European colonial interests in China. This campaign was spearheaded by Kaiser Wilhelm II of Germany, who used his close relationship with Tsar Nicholas II of Russia to ensure that Russia likewise held such racist attitudes towards East Asia. Wilhelm saw himself and the Tsar as the “gatekeepers of Europe” against the next wave of “Mongol hordes.”

With the Boxer Rebellion in China only one year after Russia acquired Liaodong (now named Port Arthur), the Tsar mobilized some 100,000-200,000 soldiers to go to Manchuria, allegedly to protect Russian interests, despite reassurances that they would leave once the conflict had ended. However, the number of soldiers would only increase once the rebellion had been put down. The Japanese Empire tried to lobby and pursue diplomatic avenues with the Russians. Believing that they could not militarily eject Russia, Japan sought to minimize their influence in the area while ensuring Korea remained within the Japanese sphere of influence.

During this buildup to the Russo-Japanese War, Kaiser Wilhelm II of Germany sought to actively provoke conflict in the Far East in order to further his own goals within Europe. He hoped to estrange Russia from its French ally, which in turn wanted Russia to limit its eastern expansion. Wilhelm instead encouraged the Tsar, his cousin, with whom he shared a close relationship. The “Yellow Peril” campaign was also in full swing by the German government at this time, intending to turn both Germany and Russia’s populations against Asia while improving perceptions of each other.

The Kaiser’s governmental support invigorated the Russian public, who believed that despite a relative weakness in Russia’s east, with no trans-Siberian railway or other means of supply, they would be able to crush the Japanese Empire either alone through their own superiority or with the help of their “White brothers in arms.” Soon enough, it became clear to Japan that the Russians were now only working in bad faith and had no genuine interest in diplomatic resolutions to Korea or Manchuria, instead stalling as more Russian forces were transferred to the Far East.

All the while, Wilhelm repeatedly attempted to push Nicholas to war, going so far as to call him a coward when the Tsar seemed a bit willing to just compromise with Japan. Russia likewise suffered from over-confidence due to German assurances of assistance and the racist belief that the Japanese or any Asian power could never defeat any allegedly “superior” European power.

At this point, in February of 1904, the Japanese Empire ran out of patience. Even against Russia’s superior numbers, sizable navy, and immense army, and even though no Asian power had managed to emerge victorious in a war against Europe in centuries, Japan decided that it would no longer yield to Russia and Europe’s alleged superiority. Surprising the whole world, Japan declared war on the 8th of February 1904. The declaration was preceded by a surprise attack by the Japanese Imperial Navy against the Russian Far East Fleet anchored in Port Arthur. The Russo-Japanese War had begun.

The Russo-Japanese War & the End of European Hegemony

The opening of the Russo-Japanese War took the Russians completely by surprise. Having been confident in Japan’s refusal to engage in a war with such a larger power, their forces were caught entirely flat-footed in the east. The Japanese strategy relied on fast movement and gaining as much territory in the east in the time they had before Russia was able to mobilize and transfer its much larger army to the front, hoping to sue for peace before a long, drawn-out conflict could develop.

A number of victories in Manchuria and Russia-occupied China led the Japanese to believe that they would achieve some form of negotiated settlement from the Russians. The Tsar, however, refused to accept that his “Glorious White Russia” could be brought down by a regional Asian power and would not even consider the humiliating possibility of a peace settlement. Meanwhile, although supportive publicly and politically of the Russian side, the Germans were unable to enter the war due to an earlier alliance between the Japanese and English, who had agreed to join the war if any European power besides Russia were to intervene. Because of this, the Russo-Japanese War would remain a contest of two with no outside intervention.

The Russo-Japanese War culminated in two massive battles, one on land and one at sea. The Battle of Mukden – at the time the largest battle between modern armies – saw the Japanese soundly, albeit costly, claim victory over the Russians, forcing them out of Manchuria. But the final, most crippling blow to Russia would come at sea, at the Battle of Tsushima. Having redeployed the majority of their Baltic fleet to Asia, the Tsar intended to smash the Japanese Navy and cut off the Japanese resupply on mainland Asia. However, in a victory that stunned the world, the Japanese Empire utterly decimated the Russian fleet. Russia lost all eleven of its battleships and the vast majority of its other ships. With Russia utterly beaten, the war was concluded with the Treaty of Portsmouth in Japan’s favor. From this point on, there was no doubt that Japan had stepped onto the world stage and that Europe was no longer uncontested abroad.

Russo-Japanese War: The Affirmation of a Global Asian Power