The Evolution & Timeline of Samurai Armor

Samurai armor went through centuries of evolution. Take a trip through Japanese military history to discover the rich tradition and craftsmanship. 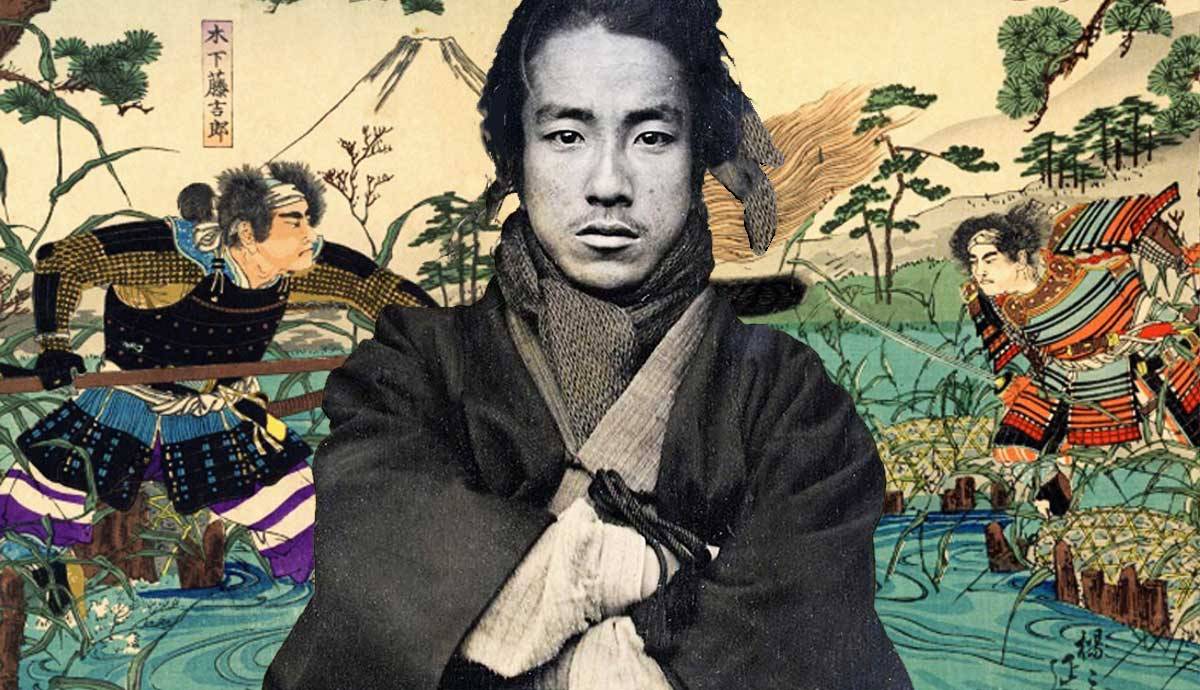 If you picture a samurai, you’re likely to imagine a warrior, perhaps on horseback, clad in colorful armor, face covered by a ferocious mask, and wearing an ornate helmet. You wouldn’t be entirely off the mark: Muromachi-period armor fits that description. But this typical armor isn’t the only type that samurai used. We’ll go through the five periods of Japanese history and compare different armors from each to see how samurai armor changed over time.

Before we begin, what follows is a list of common samurai armor parts, as well as their rough translations since we’ll be using them throughout this piece:

Shikoro: Aventail/collar that hangs from the bowl of the kabuto

Kegutsu: Boots, usually made of bearskin

Armor is designed, like weapons, with a specific idea in mind, often according to what types of attacks the wearer might face. It can be said that throughout history, arms and armor have constantly evolved to defeat one another.

Japanese armor contained leather, iron, steel, wool, cotton, and sometimes silk in its construction; despite popular perceptions, wood and bamboo were not used for Japanese armor. Ornaments could be made of precious metals like gold.

The building blocks of samurai armor were the kozane, lacquered iron and leather scales of various sizes. These scales were often attached to a mail backing called a kusari, which in turn was stitched onto a leather or cloth surface.If you’ve seen pictures of Japanese armor (whether o-yoroi or tosei gusoku) you’ll notice how brightly colored it is. This color comes partly from the odoshi, lacing used to hold the kozane together. Odoshi could be made of cotton, wool, or silk. The latter was only available to wealthy samurai.

Later, especially after firearms became part of warfare in the 16th century, lamellar armor gave way to plate, at least for the do. Other parts largely kept their traditional construction.

The Heian period is when samurai first rose to prominence as hired military for nobles. During this time, and even a bit later into the Kamakura period, they were mounted warriors who prized skill at archery, only using melee combat as a last resort. The close combat weapon of choice was the naginata (glaive) or the tachi (sword).

The classic form of samurai armor, the o-yoroi, was an ornate but boxy-looking suit. The centerpiece was the do, which covered the left, front, and back of the torso. The right side was covered by a plate called the waidate. The kusazuri hung from the do and protected the thighs.

Because of how archery was done, protection on the left side was seen as more important; samurai would loose arrows to the left. The armor was loose-fitting so that in the case of arrow penetration, there would be empty space between the armor and torso, lessening the likelihood of injury.

Every part of Heian-period o-yoroi was created with archery in mind. The sode were made far larger than later versions and hung more toward the back to stay out of the way of the bowstring. The do had a leather cover to allow the string to travel without catching on scales. This leather cover often had an image of some kind.

This was the time during which the samurai caste had taken control of the government. The o-yoroi remained somewhat prevalent in the Kamakura period. However, the older style of armor was popular only with high-ranking and wealthy samurai. For others, the armor of choice was the do-maru.

The do-maru was a more compact, lighter version of o-yoroi. While the older armor had its weight resting on the wearer’s shoulders, this armor was more form-fitting and comfortable. The do now consisted of a single piece that could be hinged under the right armpit. It rested more on the hips and allowed more freedom of movement, which was vital for survival in close combat.

Other pieces became smaller and lighter as well. Where the o-yoroi could weigh 30 kg, the do-maru was usually around 20 kg. The sode were shifted forward to cover the shoulders, and the kote saw use on both arms rather than just the left.

Another style of armor that came into vogue during the Muromachi was the haramaki. Rather than connecting at the right armpit, the haramaki connected at the back; cords wrapped around the body and tied the armor closed. By this time, even high-ranking samurai began to stop wearing the o-yoroi; it was too cumbersome for effective use of swords or polearms.

Haramaki also took less time to make. The kozane were made slightly larger (some versions were called itozane) and the lacing was therefore more sparse. With the growing numbers of samurai who needed equipment, spending almost a year making a single suit of armor was not viable. This was especially true during the Sengoku period, when all the different clans fought one another for control of the capital and the Emperor.

Around this time, during the 16th century, Portuguese sailors were shipwrecked on the island of Tanegashima. The locals recovered the ship’s cargo, which included matchlock rifles. The daimyo took to this new invention with gusto, as they were looking for any military advantage they could find.

The Azuchi-Momoyama period began when Oda Nobunaga captured Kyoto. He had changed the model of Japanese warfare: instead of elite warriors equipped with traditional weapons, Nobunaga’s forces consisted of ashigaru peasant levies. These units fought under the command of more traditional samurai.

The ashigaru wore little if any armor, but were equipped with spears and rifles. However, the samurai who commanded them wore stronger armor that would better protect against gunfire. The scale and lamellar construction, rather than being connected with lace, began to use iron rivets, which made the armor more solid. A later variant did away with itozane and kozane entirely and switched to a European-style plate cuirass. As a whole, the armor of this period was called tosei gusoku. Some surviving specimens of this armor have dents from a single musket shot, meant to demonstrate the armor’s ability to protect against firearms.

Some ashigaru, if they had the money, would buy a simple iron breastplate. Their other distinctive piece of armor was the jingasa, a metal version of the cone-shaped kasa hat worn for shade when farming.

The Edo period was the longest stretch of widespread peace in Japanese history. The Tokugawa regime put rules into place that deterred daimyo from amassing armies to vie for the capital, such as requiring daimyo and their families to dwell equally in Edo (which was the new capital) and their home domain. The shogunate forbade European trade except for a single port in Nagasaki, and firearms fell out of favor.

That said, there was still small-scale violence and some peasant revolts. Battlefield armor wasn’t as important to have, but many families passed hereditary treasures down. The fashion was to wear lightweight, easily concealed attire for protection. A form of brigandine called a kikko came into popularity: it was composed of many small hexagonal iron plates sewn onto cloth.

An aspect of samurai armor we’ve not discussed yet is the mon, or clan heraldry. The motifs could be abstract patterns, simple shapes, or representations of nature like flowers, or they could be kanji representing a motto. The color isn’t important. Samurai in battle would wear a banner with their lord’s crest on it, attached to the back of their armor.

For example, the mon of the Hojo family is an arrangement of three triangles forming a larger triangle: if you’ve played the Zelda series you may know this is where the Triforce symbol comes from. Some mon survive as company logos today: the Mitsubishi logo is the most recognizable.

Most of the ornamentation on samurai armor was on the helmet. The most common type was the maedate, a crest attached to the front of the kabuto. Common shapes included crescent moon designs, horns (these were almost ubiquitous), and antlers. The more ornate designs were found on armor commissioned by wealthy samurai. Edo-period decorative armor featured elaborate maedate and even during battle, they could be removed if the samurai didn’t want to present a larger target.

The menpo, or face masks, could be decorative as well as functional. The most frequent motifs were of oni, or demonic creatures. These sported monstrous fangs and fearsome expressions intended to intimidate enemies. Whether it worked is up to interpretation, but the mask provided protection for everything but the eyes: the warrior had to be able to see.

The most common weak points of samurai armor were at the joints and places where one piece of armor was attached to another one. When fighting got to sword range after the primary weapon was no longer available, most sword cuts were aimed at the juncture between neck and shoulder, as shown by archaeological studies of skeletons.

Lacing was also a potentially vulnerable point. A weapon could cut any protruding lacing and damage the integrity of the armor. This is part of the reason armorers switched to rivets to connect pieces. On the whole, samurai armor was designed without blunt force weapons in mind. Spears, polearms, swords, and arrows aplenty, but no bludgeoning weapons for the most part.

The Japanese battle harness was an invention widely agreed to be a work of art, yet at the same time, also no stranger to warfare.