The Thirty Years War was a series of bloody religious and political conflicts in the wider area of the Holy Roman Empire during the first half of the 17th century. 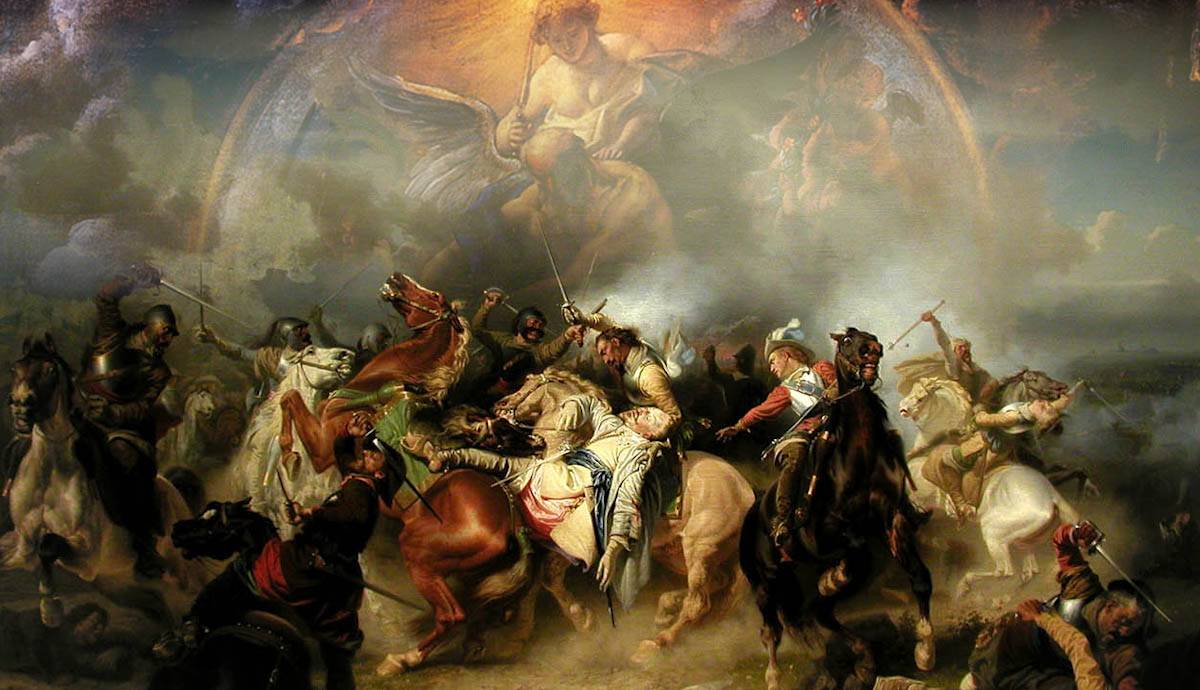 In the 17th century, tensions between northern European Protestant states and southern European Catholic states were inflamed by the Jesuits working in Bavaria and the Habsburg domains. The Habsburgs were ardent supporters of the Roman Catholic Church during the Reformation, especially after they stopped the Ottoman incursions of the later 16th century. Much of the Thirty Years War was fought between the Protestant Union and the Catholic League over territory in Germany. Besides Germany, the Thirty Years War was also fought in the Czech Republic and Denmark. The Protestants were supported by England and the Netherlands, and the Catholics by Spain. It was the first pan-European war, had several phases, and ended with the Peace of Westphalia.

Here are some of the most important battles of the Thirty Years War.

5. The Battle of White Mountain: The First Major Battle of the Thirty Years War

The Battle of White Mountain took place on November 8, 1620, and it represents the first great battle of the Thirty Years War. The combined imperial and Catholic forces inflicted a heavy defeat on an army of Czech Protestants and mercenaries. That battle marked the end of the Czech phase of the Thirty Years’ War, which lasted from 1618 to 1624.

There were about 27,000 soldiers belonging to Emperor Ferdinand II in the battle and together they defeated 15,000 Czech mercenaries under the leadership of Christian of Anhalt. The combined imperial army was composed of imperial mercenaries under General Charles Bonaventure de Longueval and soldiers of the German Catholic League under Count Johann Tilly. The imperial army included the most famous future general of the Thirty Years War, Wallenstein, and the French philosopher Rene Descartes.

The Czechs lost about 4,000 men, while the imperial army lost only 700 soldiers. The famous Tilly entered Prague after the battle and crushed the rebellion. Although many welcomed the restoration of Catholicism, five-sixths of the Czech Protestant nobility fled the country or were executed. By settling his nobility on their estates, Ferdinand secured Habsburg’s rule over the Czech lands for the next three centuries.

4. The First Battle of Breitenfeld: The First Great Protestant Victory

The first Battle of Breitenfeld, one of the greatest military skirmishes of the Thirty Years’ War took place on September 17, 1631. Its result proved the superiority of the Swedish army, which at first was underestimated by the imperial forces and not taken seriously. The Swedish King Gustav II Adolf (better known as Gustavus Adolphus) won an overwhelming victory, achieving his first significant Protestant victory in the Thirty Years’ War.

The commander of the Habsburg troops was Field Marshal Count Johann Tilly. Although his imperial soldiers managed to hold out for a while, they were forced to withdraw. Around 7,000 Imperial soldiers were killed and 6,000 were captured, many of whom then joined the Swedes as mercenaries. On the other hand, approximately 3,000 Swedes died in the battle. When Tilly realized that his defeat was imminent, he decided to flee with his guard, even though he was wounded.

The Battle of Breitenfeld showed the superiority of the structure of the Swedish army over the imperial forces that opposed it. The mobile brigades managed to maneuver better against the great imperial army. Thus they secured the Swedish victory, which was the first Protestant victory of great importance. The Swedish King managed to present himself as a capable protector and defender of Protestant interests, thus securing his leadership over the German Protestant states that would soon join him. For the Catholic League, this was the first major defeat of the Thirty Years War.

3. The Battle of Lützen: The Protector of Protestantism Dies

In the spring of 1632, King Gustavus Adolfus conquered Nuremberg, crossed the Danube, and captured Munich, from where he intended to go to Vienna. In fear, Ferdinand called for the help of Wallenstein, who gathered a large army and took it to Saxony. Gustavus followed him, and the two armies clashed in November near Lützen.

The imperial army numbered 25,000 men, while Gustavus Adolfus had 18,000 Swedes and allies at his disposal. In addition, Wallenstein was waiting for reinforcement of 8,000 soldiers led by Field Marshal Pappenheim. The Swedish army emerged victorious, but Gustavus Adolfus himself died in battle. Apart from that, the Swedes also lost 6,000 soldiers, while the imperial side lost just 3,500. The King’s death was a great loss for Protestantism, which had managed to survive in Germany thanks to him, as Ferdinand II’s intention to destroy Protestantism failed.

Peace negotiations did not take place, however, because the emperor was not ready to make concessions. Sweden, on the other hand, despite the death of King Gustavus Adolfus, remained strong because it was led by a new political leader, the Protestant Chancellor Alex Oxenstierna.

2. The Battle of Nördlingen: The Catholics Achieve a Great Victory

In 1634, the time came for a showdown between the joint Spanish-Imperial Army and the Swedish and Saxon armies. The Swedish army had some initial successes in Bavaria when it conquered Landshut and when General Johann von Aldringen was killed. On the other hand, the imperial army did not rest.

The first city to fall under the onslaught of the imperial army was Regensburg, and then Donauwörth. The Battle of Nördlingen itself was favorable to the Catholic side throughout. The Imperial-Spanish forces arrived first and occupied more favorable positions, especially the important hill that dominated the battlefield.

When the two armies finally clashed on September 6, the Habsburg army numbered 33,000 men and the Protestants had only 25,000. By the end of the day, 12,000 Protestants had lost their lives on the battlefield, and some 4,000 had been captured. Nördlingen immediately fell, and the remnants of the defeated army, under Bernhard of Saxe-Weimar, retreated to Alsace, while Sweden hesitantly emptied all its garrisons south of Maine.

1. The Battle of Rocroi: The End of Spanish Hegemony

On May 19, 1643, the Battle of Rocroi took place, marking the symbolic end of the Spanish domination of the world. The Battle of Rocroi took place just days after King Louis XIV ascended the French throne. In early 1643, the Spanish launched an invasion of northern France to relieve pressure on Catalonia and the Franche-Comte. Under the leadership of General Francisco de Melo, a mixed army of Spanish and imperial troops crossed the border from Flanders and moved across the Ardennes. Arriving in the fortified city of Rocroi, de Melo laid siege.

To block Spanish progress, the 21-year-old Duke of Enghien, later Prince of Conde, moved north with 23,000 men. The French garrison at Rocroi consisted of only 1,400 men. The Spaniards believed that the fortress was in poor condition, so de Melo did not bother with artillery, having only 18 pieces at his disposal. However, the artillery fire that engulfed his own men from the fort showed him that he had made a huge mistake. He managed to occupy the outer walls on May 17, at a time when Conde was already nearby.

The Spaniards counted 8,000 dead and 7,500 captured at the end of the battle, while the French lost 2,000. In the years that followed, they no longer had the strength or the ability to achieve more in the war and had to limit themselves to defensive actions. It was France’s greatest victory in the Thirty Years War.

The Peace of Westphalia: The End of the Thirty Years War

After the lengthy negotiations which followed the Thirty Years War, the warring parties signed the Peace of Westphalia in October 1648. However, the signing of the agreement did not lead to the conclusion of peace between France and Spain.

The territorial changes were significant. Sweden received western Pomerania, smaller areas in the Baltic, and the dioceses of Bremen and Verdun. France secured power over the cities of Metz, Toul, and Verdun and controlled Alsace. Maximilian of Bavaria received parts of the Palatinate, most of which were returned to Frederick’s son Charles Louis. Brandenburg received Magdeburg, the dioceses of Halberstadt, Minden, and Kammin, and eastern Pomerania.

The Peace of Westphalia laid out principles that would be in force for centuries to come. It emphasized the principle of state sovereignty at the expense of universal empires. The treaty confirmed the disintegration of the empire, as evidenced by the fact that about three hundred German states participated in the work of the Congress. The peace treaty acknowledged their sovereignty and gave them complete freedom in matters of domestic and foreign policy. All German states participated equally in the work of the Reichstag, which could cut taxes, gather armies, and conclude agreements. The recognition of old German freedoms turned the emperor into the ceremonial ruler of a diverse group of independent states.