What Are Roy Lichtenstein’s Most Famous Artworks? 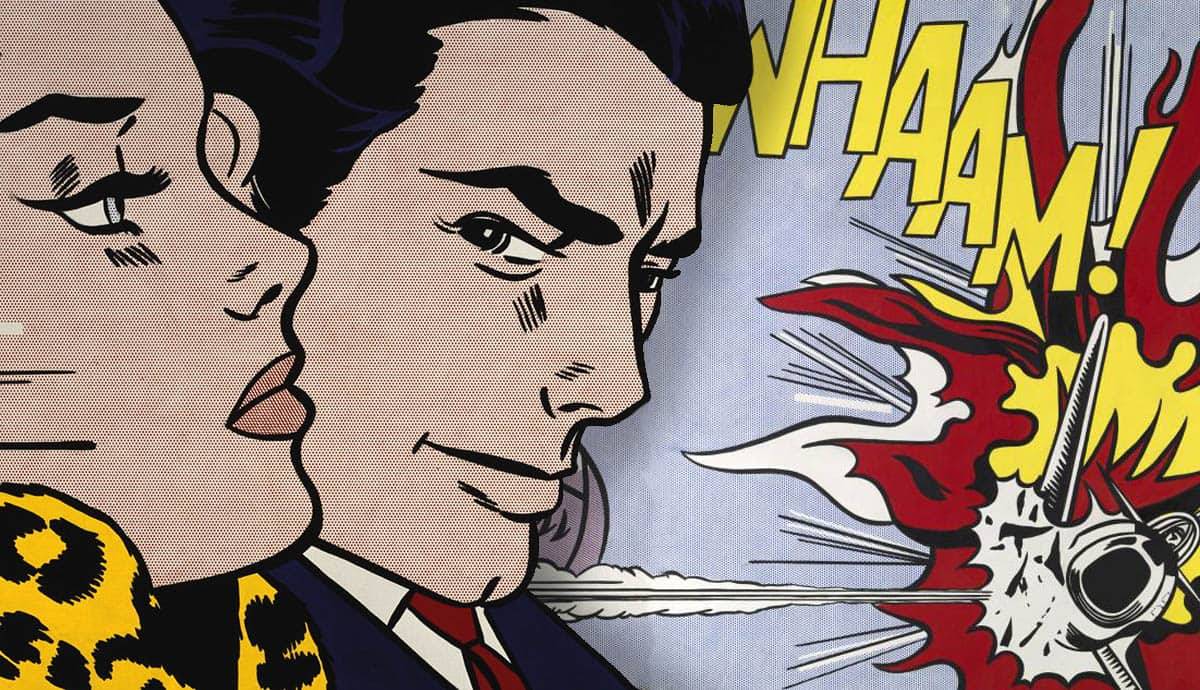 Roy Lichtenstein was one of American Pop Art’s greatest pioneers. He broke new ground in 1960s New York, bringing the gags, gimmicks and Ben-Day dots of comic books into his art. In doing so, he invented an individual style that is still instantly recognizable today. Throughout his long career, Lichtenstein produced a vast body of work including paintings, drawings, prints and sculptures. There are, however, just a handful of these works from the 1960s that have become his most memorable icons. It is these that we will celebrate in this brief guide to Lichtenstein’s art.

Lichtenstein made his iconic painting In the Car, 1963, early in his career. It signaled a period of significant breakthrough, when he began reproducing comic book images as Pop Art. We see in this work how Lichtenstein zeroed in on the action shot of a single cropped, close-up comic book frame, emphasizing the most dramatic point of the story. This particular comic book scene was based on a series titled ‘Girls Romances’, which relied on the stereotypical male/female archetypes of the era, similar to characters from a Hitchcock movie. On the one hand, these characters seem to encapsulate the style of 1950s America, with the blonde bombshell and the dark haired, suave male suitor. But Lichtenstein’s characters are hyper-inflated, almost ridiculous stereotypes, rendered with flat superficiality in pixelated Ben-Day dots.

In this dramatic, action-filled diptych painting, Lichtenstein explores how bold, oversized comic book text can grab our attention. Here the word “Whaam!”, is drawn in bright yellow letters that tumble over one another. Red and yellow flames and action lines explode around it. To the left is a cropped fighter jet, surrounded by long lines and puffs of smoke that suggest high-speed movement. Lichtenstein made this work as part of a series on the subject of war. He used excerpts from the comic book series ‘All-American Men of War.’ On one hand, the artist chose this subject matter for its deliberately provocative, emotive and attention-grabbing material. But Lichtenstein’s rendering of war as an almost child-like, stereotypical male fantasy was also a tongue-in-cheek criticism on the senselessness of war. It is telling that he made this series as the Vietnam War was already underway.

In Drowning Girl, 1963, Lichtenstein conveys what he calls, “highly-charged and emotional subject matter.” Lichtenstein lifted the scene in this painting from the 1960s comic book titled ‘Secret Hearts.’ He shows us a young woman on the brink of drowning, while laps of water around her are echoed by the tears filling up her eyes. Lichtenstein enjoyed illustrating moments like this with a grossly exaggerated language, emphasizing stereotypes such as the vulnerable young woman and the male hero. He deliberately ridicules these archetypes, questioning their validity, particularly when they were so ingrained into 1950s and 1960s America.

Lichtenstein made a series of paintings and prints like this one featuring enlarged brushstrokes in the mid-1960s. Although they have a somewhat expressive appearance, Lichtenstein actually lifted the brushstrokes from a comic book story titled ‘The Painting’. It was published as part of a collective called ‘Strange Suspense Stories’ in 1964. The expressive brushstroke had become synonymous in the 1960s with the language of Abstract Expressionism and the stereotypical tortured artistic soul. But by rendering his brushstroke in a clean, precise and mechanical style, Lichtenstein makes it detached and depersonalized. In doing so, he reminds us that it, too, has become a commodified cultural trope, one that is easily replicated and reproduced.