HomeAnswersWho Made Urban Light and Why? (Public Artwork)

Who Made Urban Light and Why? (Public Artwork) 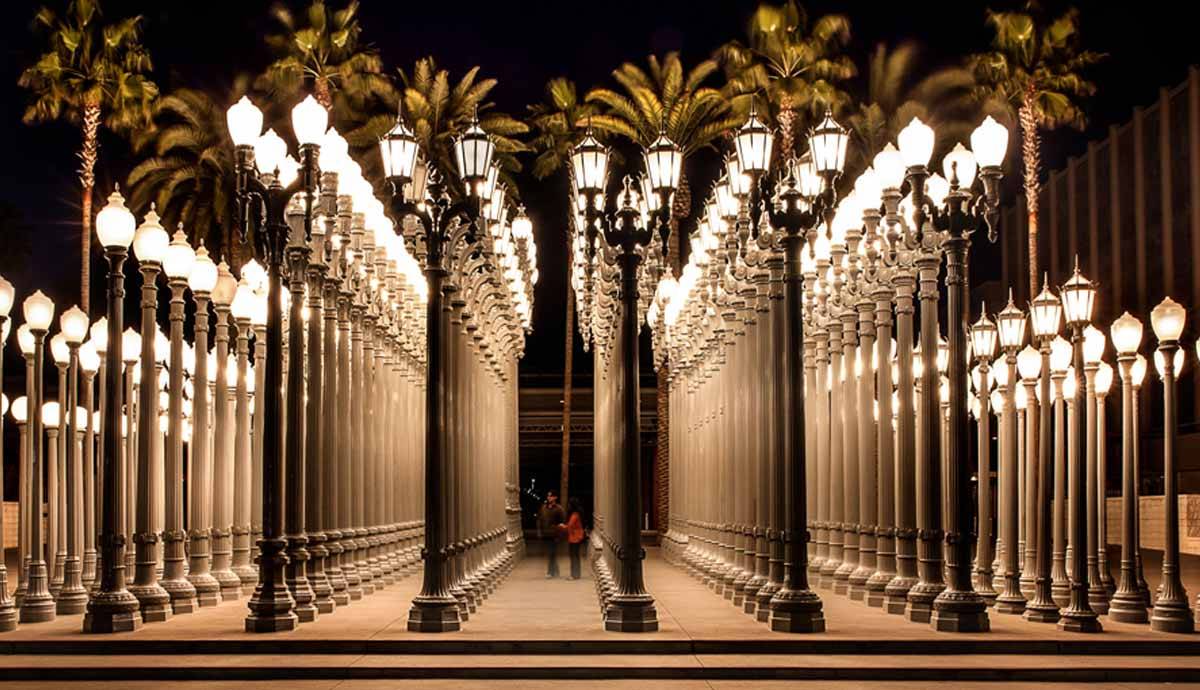 Urban Light is the iconic public art sculpture that illuminates the entranceway to the Los Angeles County Museum of Art (LACMA) with 202 repurposed, vintage streetlamps, arranged into a grid. Installed in 2008, the sculpture has become so popular and photographed that LACMA have gone on to publish an entire book of photographs documenting it. Urban Light has also been the backdrop for films and weddings. Even more amazingly, the entire installation is solar powered, and it lights up the museum entranceway from dusk until dawn every single day, thanks to a clever astrological timer. The mastermind behind this great public art statement was American conceptual artist Christopher Lee Burden (1946-2015), better known as Chris Burden. We take a closer look at the artist and his reasons for creating this monumental and theatrical temple of light.

Chris Burden was a California-based artist who made his name during the 1970s. He garnered media attention for several of his performance artworks, which caused him physical harm or put his life in danger. In Shoot, 1971, the artist asked an assistant to shoot him in the arm from 16 feet away with a .22 rifle. Meanwhile, in B.C. Mexico, 1973, Burden rode a kayak to a deserted beach, where he lived for 11 days with water and no food.

Towards the end of the 1970s Burden changed tack and began making large sculptural installations, often with elements of complex engineering or intricate structural components. One of these was B-Car, 1975, a fully working car which could travel 100 miles an hour on 100 miles per gallon. Another, more recent work made for Tate in London was the kinetic installation When Robots Rule: The Two Minute Airplane Factory, 1999, an assembly line of machine parts which produced rubber-band powered model airplanes from rudimentary materials.

Burden had been collecting and restoring vintage Californian streetlamps from the 1920s and 1930s with no particular purpose in mind for many years. Before creating Urban Light, he approached several different museums with the purpose of creating a light installation using these rare vintage finds. Fortuitously, it was LACMA who agreed to the public art installation, which made historical sense given how well the lamps tied in with the history of California. Burden updated the lamps to be entirely solar powered and set up a timer to ensure they stay lit from dusk until dawn. The entire installation was completed in 2008, lighting up the once empty plaza space in front of LACMA’s Wiltshire Boulevard entrance.

He Created a Modern Day Temple

Burden deliberately arranged the streetlamps into a careful grid formation to resemble the order and symmetry of an ancient Greek or Roman temple. Burden noted in particular how the white columns of the streetlamps had ridged edges resembling Greek or Roman columns. He said, “It’s kind of like lining up toy soldiers—you know, where you get little columns of them. And I think the repetition works.” This lends the otherwise minimalist, modernist entranceway to LACMA a sense of historical grandeur. Visitors can then walk through the space at any time of day or night, making it a truly accessible and interactive work of public art. Wallis Annenberg Director Michael Govan reinforced this concept, calling Urban Light, “an honest-to-goodness Los Angeles temple made of local materials, in our time.”

He Made the City Feel Safer

The sheer volume of light coming from 222 streetlamps makes for a spectacular night-time scene. One of Burden’s most important statements in lighting up the city in this way was to make a darkened part of the city feel safer at night. He said the lights encapsulate what a modern, sophisticated society should look like: “safe after dark and beautiful to behold.”