HomeAnswersWhat Are the Most Famous Roman Temples of All Time?

What Are the Most Famous Roman Temples of All Time? 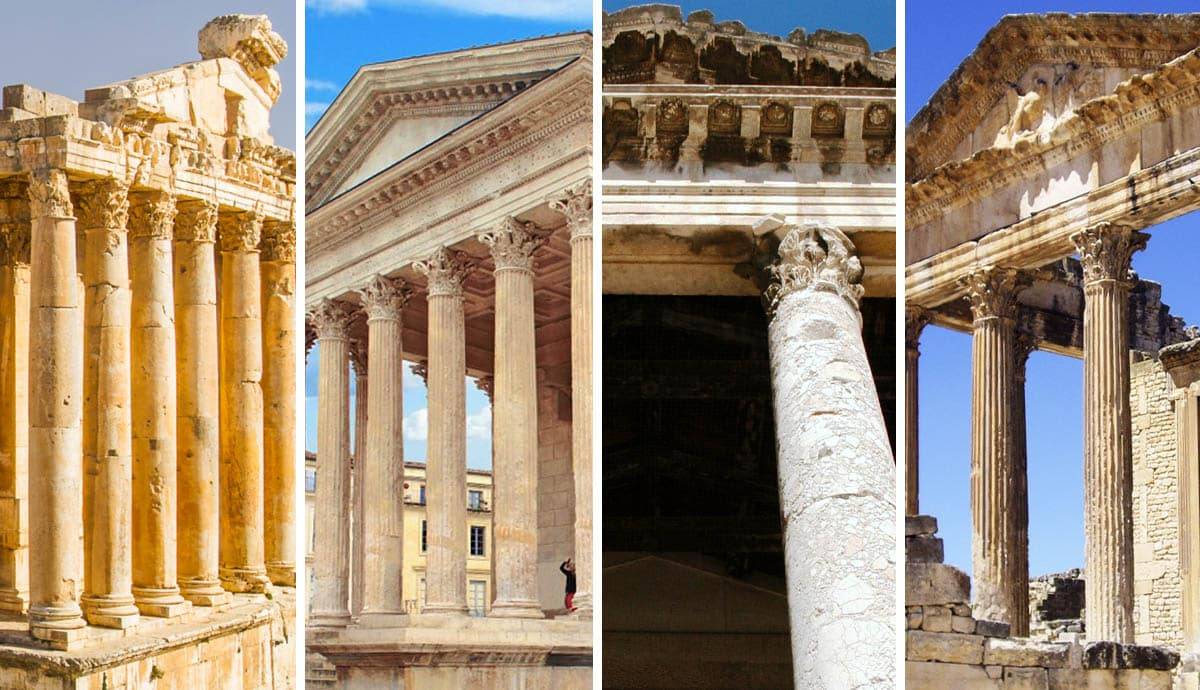 Ancient Romans constructed vast, soaring temples all across the Roman Empire, spanning from east to west. They became the vitally important sacred places of worship and commemoration for ancient Roman society. Many of these architectural marvels have survived in part, or whole for over two thousand years. Read on to discover more about the most famous Roman temples of all time, which continue to attract tourists from all over the world.

The breath-taking Pantheon in the center of Rome is a sight to behold, with its huge domed portico containing an open hole leading up to the sky. Romans constructed the Pantheon in 25 BCE. They dedicated this majestic temple to all the Roman gods (pan meaning god, and theos meaning gods). Since then conservationists have made several major renovations. This means it is still standing strong, and remains a place of religious worship for the Roman Catholic Church today.

2. The Roman Temple of Augustus and Livia, Vienne

Situated in the French city of Vienne, Romans built the temple of Augustus and Livia in honor of their great and heroic Emperor Augustus and his wife Livia. They completed this impressive building in around 20 BCE to 10 BCE. Given its age, this iconic building is remarkably well-preserved. Moreover, this great monument to the first true Emperor of Rome is now an iconic emblem of the Gallo-Roman settlement in Vienne.

3. The Temple of Augustus, Pula

Here’s another temple built in honor of Rome’s first leader Emperor Augustus; the Temple of Augustus is in the present-day city of Pula in Croatia. Romans built this temple during Augustus’s lifetime, between 27 BCE and 14 CE, and it is one of the best-preserved monuments of the entire Roman Empire. Because it is in such great condition, the temple has become a gallery space for displaying important ancient artefacts and Roman sculptures.

Maison Carrée (meaning square house) is in the southern French city of Nimes. Romans finished building this elegant construction in around 16 BCE, during the reign of Emperor Augustus. Ornately adorned with tall columns, acanthus leaf motifs and birds, this stunning marble temple is in near-perfect condition. It owes this preservation to the people of Nimes, who have used the building over the centuries for a variety of roles, including town hall, church, and stables. Today, it is a museum and archival center illustrating the history of Nimes. And let’s not forget that Maison Carrée was the inspiration of Paris’s famous church, La Madeleine, founded by Napoleon Bonaparte in 1842.

5. The Roman Temple of Bacchus, Baalbek

The Temple of Bacchus is in the present-day Lebanese city of Baalbek, surrounded by a series of smaller temples in the Baalbek Complex. The whole site was constructed in the 2nd century CE under Roman Emperor Antoninus Pius. This particular temple is one of the tallest the Romans ever built, standing at an impressive 20 meters high. Romans created this colossal structure to honor the Roman Triad of Heliopolis (Jupiter, Venus and Mercury). Today the Temple of Bacchus is a UNESCO World Heritage Site.

Garni Temple in Armenia is a fascinating site of historical importance, as it is the only surviving Greco-Roman colonnaded building in Armenia. Built in around the 1st century CE, the temple was commissioned by the pro-Roman King Tiridates of Armenia, with support from Roman Emperor Nero. An iconic emblem of pre-Christian Armenia, it miraculously survived both the Christian destruction of pagan architecture in the 4th century CE, along with an earthquake in 1679. Partial reconstruction of the temple in the 1970s means it is still standing strong today.

7. The Capitol of Dougga, Tunisia

The Capitol of Dougga is one of several well-preserved Roman monuments housed in the UNESCO World Heritage Site of Dougga in Tunisia. In the 5th century BCE this site was a busy Numidian capital city and it became incorporated into the Roman Empire in the 1st century BCE. The Capitol was built to honor the Capitoline Triad of Jupiter, Juno and Minerva, and it boasts tall, slender columns and detailed Corinthian capitals.

What is the Difference between the Parthenon and the Pantheon?