HomeAnswersWhat is the Difference between the Parthenon and the Pantheon?

What is the Difference between the Parthenon and the Pantheon? 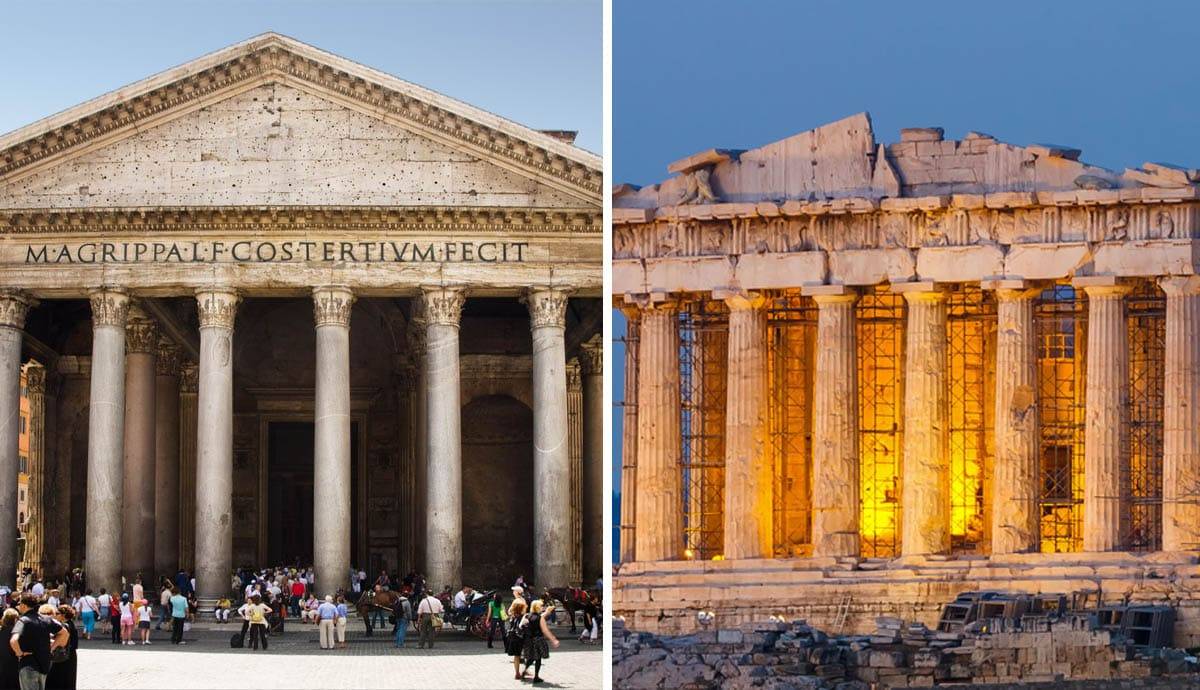 The Parthenon and the Pantheon are two ancient, marble temples with a long and varied past. They both have remarkably similar names, while both temples have survived the test of time. Each continues to attract tourists from around the world. With so much in common, it’s easy to confuse the two. But there are in fact many important differences that make it easier to tell them apart. Let’s take a closer look at the fundamental differences that help distinguish each ancient temple, so you’ll never mistake one for the other again.

The Parthenon Was Built in Athens

The Parthenon is the oldest of the two temples, built in ancient Greece in the 5th century BCE. It took roughly 15 years to complete, from 447 to 432 BCE. Greeks built this majestic temple to celebrate their victory over the Persians during the Greco-Persian war. Funding for the Parthenon came from the prosperous city of Athens. It was very much a victory monument, celebrating the wondrous power of Greece over the ancient world.

The Parthenon Was Classical in Style

The Parthenon was built high on the Athenian Acropolis in the classical architectural style, with tall columns and Doric and Ionic orders. Greek sculptor and mathematician Phidias designed the Parthenon in an ordered, geometric design, with a series of balanced lines and tall columns. He designed the building with a carefully balanced, mathematical ratio of 4:9, which gave the temple a harmonious quality of order and symmetry. Over the centuries the Parthenon has fallen victim to bombing, looting and rebuilding, but it is still possible to see how majestic it would have been in its day, while replica versions have also been built to show how it once would have looked.

The Parthenon Was Built to Honor Athena

Ancient Greeks believed the goddess Athena helped win the war, so a statue of her was erected in the center of the Parthenon. The name of the temple is derived from the Greek word Parthenos, meaning virgin, or innocent maiden, a reference to the chaste goddess. Originally a statue designed by Phidias was housed inside the temple, which was more than 37 feet tall, and made out of ivory and gold. The statue stood in the center of the temple for more than 1,000 years, but mysteriously vanished.

The Pantheon Was Built in Rome

Today, the Pantheon is one of the best-preserved monuments of ancient Rome. Emperor Hadrian worked with Apollodorus of Damascus to oversee its construction, between 126 and 128 AD. Made from concrete, the Pantheon was lined with marble imported to Rome from Greece, Egypt, North Africa and Asia Minor. This meant the Pantheon was a deliberately ostentatious display of wealth and prosperity, demonstrating Rome’s dominion over the ancient world and an epicenter of international trade.

The Pantheon Has a Huge Domed Ceiling

Although the exterior of the Pantheon was classical in style, with a similar style of columns to the Parthenon, the interior of the Pantheon is remarkably different. Inside, the Pantheon is dominated by a large, domed ceiling, an impressive feat of engineering which was unlike anything that had been previously built. In its center is a hole, or ‘eye’ leading up towards the sky. Although rain does occasionally come in, the floor of the building is slanted to allow it to easily drain away. It wasn’t until the Renaissance that anything as ambitious as this construction would be attempted again. The Pantheon has been altered inside over the years, but its structure is remarkably well preserved, making it one of the oldest surviving monuments in the world.

H3 – The Pantheon Was Built to Honor All Gods

In contrast with many temples of the ancient world, which were usually dedicated to honor one specific deity, ancient Romans erected the Pantheon as a monument to all gods. Romans named the Pantheon after this reference, with ‘pan’ meaning all, and ‘theos’ meaning gods. The huge dome in the temple’s ceiling has a hole that leads straight up to the sky, offering a tantalizing glimpse skywards to the place where Romans believed all gods resided above them.

Phidias: The Greatest Sculptor Of Antiquity

6 Spectacular Replicas Of The Parthenon