The face of Millais’ Ophelia and the bride of Dante Gabriel Rossetti, Elizabeth Siddal was also an influential Pre-Raphaelite artist in her own right. 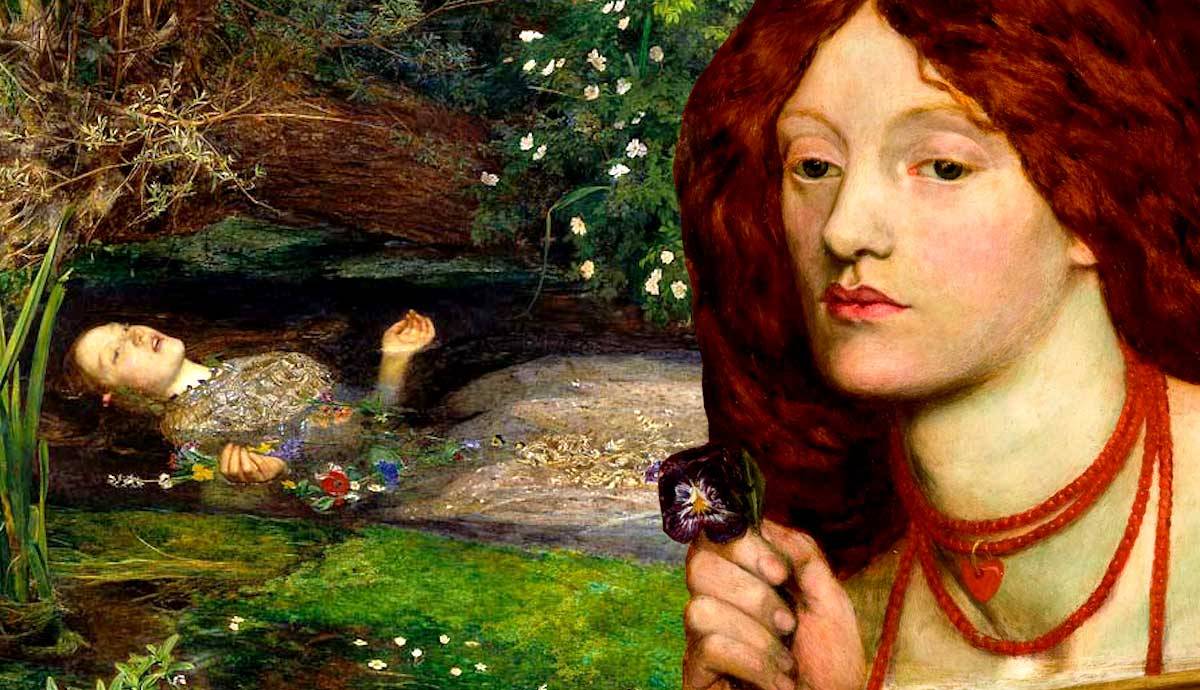 With a towering lanky figure, angular facial features, and copper-colored hair, Elizabeth Siddal was considered unattractive by Victorian-era beauty standards. Yet the avant-garde artists of the burgeoning Pre-Raphaelite Brotherhood, ever devoted to realism, found themselves unanimously captivated by Siddal’s unusual characteristics. Siddal went on to model for hundreds of works by the likes of William Holman Hunt, John Everett Millais, and especially Dante Gabriel Rossetti, whom she eventually married. The critical success of the paintings she appeared in helped the Pre-Raphaelite movement flourish—and it challenged and ultimately helped expand the definition of beauty for Victorian-era women.

Who Was Elizabeth Siddal?

In addition to her profound influence on the Pre-Raphaelite Brotherhood as a professional model and muse, Elizabeth Siddal became a significant Pre-Raphaelite artist in her own right before her untimely death at age 32. Her oft overlooked, yet prolifically creative, legacy demonstrates that “Brotherhood” is definitely a misnomer for the iconic movement. Elizabeth Siddal, frequently nicknamed Lizzie, was born Elizabeth Eleanor Siddall in 1829.

Her given surname was originally spelled differently from what it is now remembered as. That’s because Dante Gabriel Rossetti, who apparently preferred the aesthetic of the single “l,” suggested she make the change. Siddal came from a working-class family in London and suffered from a chronic illness from early childhood. Her education was commensurate with her gender and social status, but she demonstrated an early fascination with poetry after discovering verses by Alfred Lord Tennyson written on wrapping paper around a stick of butter.

As a young adult, Siddal worked in a hat shop in central London, though her health made the long hours and poor working conditions difficult. She decided to pursue work as a professional artist’s model instead—a controversial career choice, as modeling was negatively associated with prostitution in the Victorian era. But Elizabeth Siddal hoped that, as an artist’s model, she could preserve her health, escape the pitfalls of Victorian-era retail work, and, most importantly, enter the exciting world of London’s avant-garde artists.

When painter Walter Deverell set out to paint a scene from Shakespeare’s Twelfth Night, he struggled to find the right model for Viola—until he came across Elizabeth Siddal working a shift at the hat shop. Unlike many models Deverell approached, Siddal was willing to pose in the leg-bearing costume of the iconic cross-dressing character. And, true to the Pre-Raphaelite Brotherhood’s rejection of idealized Classical aesthetics, Deverell was also drawn to Siddal’s unique appearance. This was the first of several Pre-Raphaelite paintings that Siddal was employed to sit for, and it wasn’t long before Siddal was earning enough money as an artist’s model to permanently leave her position at the hat shop.

By the time John Everett Millais invited Siddal to model for his magnum opus Ophelia, he was forced to wait months for her to become available to visit his studio. After enduring Millais’ notoriously thorough artistic process—which involved days of lying in a tub of water to simulate Ophelia’s death by drowning—Ophelia was exhibited at the Royal Academy in London. Its positive public reception and critical success made Elizabeth Siddal somewhat of a celebrity. Among those especially enamored by Siddal was Dante Gabriel Rossetti, whom she would eventually collaborate with on art and marry. As their romantic entanglement deepened, Siddal acquiesced to Rossetti’s request that she models exclusively for him. Throughout their relationship, Rossetti completed several paintings and hundreds of drawings of Siddal in their shared living and studio spaces—many of which are intimate depictions of her reading, relaxing, and creating her own art.

In 1852—the same year she became known as the face of Millais’ Ophelia—Elizabeth Siddal took a turn behind the canvas. Despite lacking any formal artistic training, Siddal created over one hundred artworks over the course of the following decade. She also began writing poetry like many of her Pre-Raphaelite counterparts. While the subject matter and aesthetic of Siddal’s work are naturally compared to Dante Gabriel Rossetti, their creative relationship was more collaborative than strictly derivative.

Most mainstream audiences were unimpressed with the naivety of Siddal’s work. Others, however, were interested in watching her creativity unfold, unadulterated by traditional education in fine arts. Influential art critic John Ruskin, whose favorable opinion of the Pre-Raphaelite movement helped catalyze its success, became an official patron of Siddal. In exchange for ownership of her completed works, Ruskin provided Siddal with a salary six times greater than her annual earnings at the hat shop, as well as favorable critical reviews and access to collectors.

By 1857, Siddal earned the honor of exhibiting work at the Pre-Raphaelite Exhibition in London, where, as the only woman artist represented, she sold her painting Clerk Saunders to a prestigious American collector. Siddal’s inexperience with drawing the human figure is evident in her work—but it embodied what other Pre-Raphaelite artists, desperately trying to unlearn their academic training, were attempting to achieve. The decorative stylization and jewel-like coloration of Elizabeth Siddal’s work, as well as her gravitation towards medieval motifs and Arthurian legends, all demonstrate her active involvement in the Pre-Raphaelite movement.

For several years, Dante Gabriel Rossetti and Elizabeth Siddal were entangled in an on-again, off-again romantic relationship. Siddal’s ongoing struggles with illness, and Rossetti’s affairs with other women, contributed to the instability of their uncoupling. But Rossetti eventually did propose marriage to Siddal—going against the wishes of his family, who did not approve of her working-class background—and she accepted.

During their engagement, Rossetti got to work on a gilded portrait of Siddal called Regina Cordium (The Queen of Hearts). The cropped composition, stark and saturated color palette and elaborate gilded details were unusual for portraiture at the time and, true to the painting’s title, echo the design of a playing card. The ornamental gold throughout, and the fact that Siddal blends into this gilded background almost seamlessly, reveal Rossetti’s tendency to view his romantic partner more as a decorative object than as an individual.

The wedding was postponed several times due to the unpredictability of Siddal’s illness, but they were finally wed in May 1860 at a church in a seaside town. No family or friends attended the ceremony, and the couple asked strangers they found in town to serve as witnesses. Rossetti allegedly carried Siddal into the chapel as she was too frail to walk down the aisle.

Elizabeth Siddal’s illness only worsened after her marriage to Dante Gabriel Rossetti. Historians speculate a variety of reasons for her malaise, including tuberculosis, an intestinal disorder, and anorexia. Siddal also developed a crippling addiction to laudanum, an opiate she began taking to relieve her chronic pain. After Siddal delivered a stillborn daughter a year into her marriage with Rossetti, she developed severe postpartum depression. She also worried that Rossetti wanted to replace her with a younger lover and muse—a paranoia that was not entirely unfounded—which further contributed to her mental decline and worsening addiction.

In February 1862, shortly after becoming pregnant a second time, Elizabeth Siddal overdosed on laudanum. Rossetti found her unconscious in bed and called for several doctors, none of whom were able to revive Siddal. Her death was officially considered to be an accidental overdose, but rumors circulated that Rossetti allegedly found and destroyed a suicide note written by Siddal. In the Victorian era, suicide was illegal and considered immoral by the Church of England.

The Legacy of Elizabeth Siddal

Dante Gabriel Rossetti’s famous masterpiece Beata Beatrix represents a distinct shift toward the signature portrait style that he is most remembered for. More importantly, this evocative and ethereal painting is a manifestation of his grief over the tragic death of his wife Elizabeth Siddal. Beata Beatrix depicts Siddal as the character of Beatrice from the Italian poetry of Dante, Rossetti’s namesake. The haze and translucence of the composition represent a vision of Siddal after her death in an unknown spiritual realm. The presence of a dove with an opium poppy in its beak is possibly a reference to Siddal’s death from a laudanum overdose.

Elizabeth Siddal was buried in London’s Highgate Cemetery alongside members of the Rossetti family. Overcome with grief, Rossetti placed a handwritten book of his poetry in the coffin with Siddal. But seven years after Siddal’s burial, Rossetti strangely decided he wanted to retrieve this book—the only existing copy of many of his poems—back from the grave.

In the pitch dark of an autumn night, a secret operation unfolded in Highgate Cemetery. Charles Augustus Howell, a friend of Rossetti, was appointed to discreetly perform the exhumation and retrieve Rossetti’s manuscripts, which he did. Howell later claimed that when he looked inside the coffin, he discovered that Elizabeth Siddal’s body remained perfectly preserved and that her iconic red hair had grown to fill the coffin. The myth of Siddal’s beauty living on after her death contributed to her cult figure status. Immortal or not, Elizabeth Siddal is a formidable figure who influenced a male-dominated art movement—and challenged a male-centric beauty standard—through her art and modeling work alongside the Pre-Raphaelite Brotherhood.