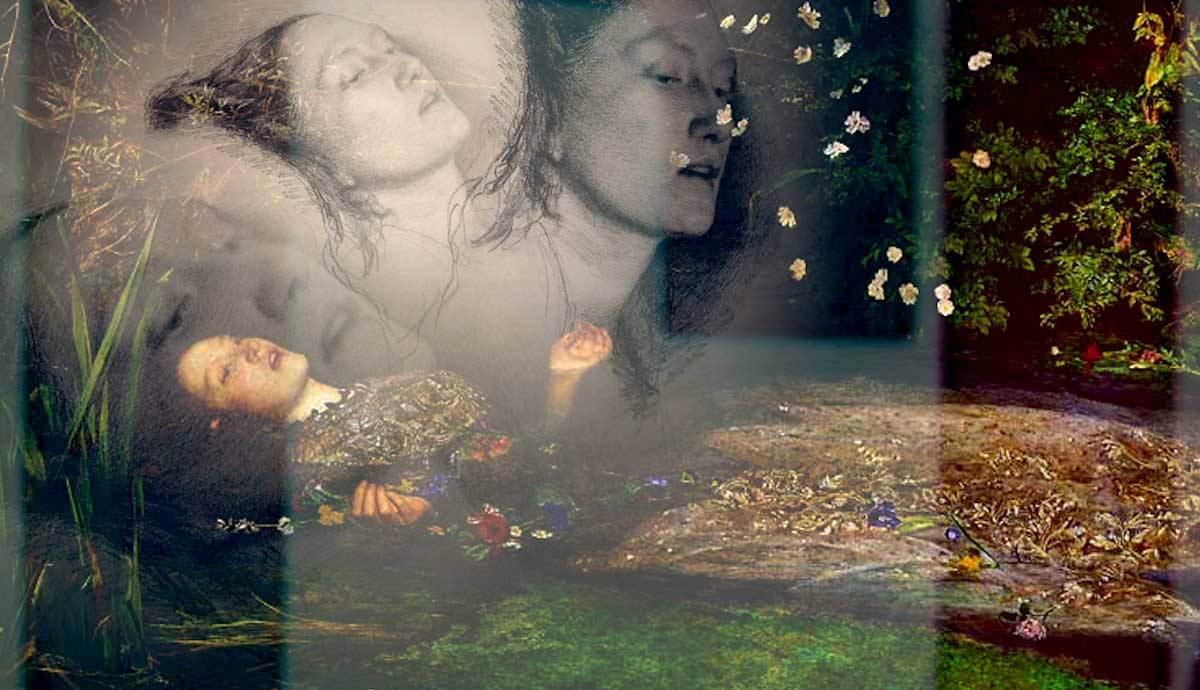 “Your sister’s drown’d, Laertes,” laments Queen Gertrude in Act 4 Scene 7 of William Shakespeare’s tragedy Hamlet. Overwhelmed by the violent death of her father at the hands of her lover Hamlet, Ophelia is driven mad. She falls into the river while singing and picking flowers, and then drowns—sinking slowly with the weight of her clothing. Read on to discover how Millais’ Ophelia became emblematic of the artist’s career and the avant-garde aesthetic of the Pre-Raphaelite Brotherhood in Victorian-era England.

The series of events concerning Ophelia’s death is not acted out on stage, but rather relayed in poetic verse by the queen to Ophelia’s brother Laertes:

“There is a willow grows aslant a brook,

That shows his hoar leaves in the glassy stream;

There with fantastic garlands did she come

That liberal shepherds give a grosser name,

But our cold maids do dead men’s fingers call them:

There, on the pendent boughs her coronet weeds

When down her weedy trophies and herself

Fell in the weeping brook. Her clothes spread wide;

And, mermaid-like, awhile they bore her up:

Which time she chanted snatches of old tunes;

As one incapable of her own distress,

Unto that element: but long it could not be

Till that her garments, heavy with their drink,

Pull’d the poor wretch from her melodious lay

This haunting narrative was famously depicted by John Everett Millais, a member of the Pre-Raphaelite Brotherhood and one of the most successful English painters of the Victorian era. Painted at the beginning of the short-lived yet historic Pre-Raphaelite movement, John Everett Millais’ Ophelia is widely considered to be the ultimate—or at least the most recognizable—masterpiece of the Pre-Raphaelite Brotherhood. Combining his passion for Shakespeare’s stories and his obsessive attention to detail, Millais showcased both his advanced technical skills and his creative vision in Ophelia.

Millais depicts Ophelia floating precariously in a river, her abdomen gradually sinking beneath the water’s surface. The fabric of her dress is clearly being weighed down, foreshadowing her impending death by drowning. Ophelia’s hand and facial gestures are that of submission and acceptance of her tragic fate. The scene around her is composed of various flora, all rendered with precise detail. John Everett Millais’ Ophelia went on to become one of the most important images of the Pre-Raphaelite movement and of 19th-century art at large.

Who Was John Everett Millais?

From early childhood, John Everett Millais was considered a prodigious artist. He was accepted to the Royal Academy schools in London at age 11 as their youngest-ever student. By young adulthood, Millais had an impressive education under his belt and had befriended fellow artists William Holman Hunt and Dante Gabriel Rosetti. This trio shared interest in breaking away from the traditions they were required to adhere to in their lessons, so they formed a secret society they called the Pre-Raphaelite Brotherhood. At first, their fraternization was indicated only by their subtle inclusion of the initials “PRB” in their paintings.

After forming the Pre-Raphaelite Brotherhood, John Everett Millais exhibited Christ in the House of His Parents at the Royal Academy and attracted several negative reviews, including a scathing writeup by Charles Dickens. Millais had painted the scene with meticulous realism, having observed a real-life London carpenter’s shop and depicting the Holy Family as ordinary people. Fortunately, the highly detailed Ophelia, which he exhibited at the Royal Academy soon after, was received much more favorably. And his later works, which eventually drifted away from the evolving Pre-Raphaelite aesthetic in favor of his trademark staunch realism, made him one of the wealthiest artists alive. Millais was elected President of the Royal Academy towards the end of his life and was buried in St. Paul’s Cathedral.

Like many Victorian painters, John Everett Millais was inspired by the dramatic works of William Shakespeare. During his lifetime and after his death, the playwright was certainly appreciated by the public—but it wasn’t until the Victorian era that his reputation as one of England’s all-time greatest writers was truly solidified. This renewed appreciation of Shakespeare led to new conversations about the playwright, including books written by various scholars, an increased number of stage productions, and even sermons and other moral lessons written by religious leaders.

Artists of the Victorian era, including John Everett Millais and the Pre-Raphaelite Brotherhood, were naturally drawn to the works of Shakespeare for their dramatic medieval characters and themes. Ophelia, a character who encompassed both romantic and tragic elements, became an especially popular subject for painters. In fact, the English painter Arthur Hughes exhibited his version of Ophelia’s demise in the very same year as Millais’ Ophelia. Both paintings imagine the climactic moment not actually enacted on stage in Hamlet but rather regaled by Queen Gertrude after the fact.

Truth to Nature in Millais’ Ophelia

In addition to poring over the works of Shakespeare and other medieval influences, the founding members of the Pre-Raphaelite Brotherhood, including John Everett Millais, were captivated by what the English critic John Ruskin had to say about art. The first volume of John Ruskin’s Modern Painters treatise was published in 1843. In direct opposition to the tenets of the Royal Academy, which favored an idealized Neoclassical approach to art, Ruskin advocated for the truth to nature. He asserted that painters should not attempt to emulate the work of the Old Masters, but that they should instead closely observe the natural world around them and depict it as accurately as possible—all without romanticizing or idealizing their subjects.

John Everett Millais truly took Ruskin’s radical ideas to heart. For Ophelia, he began by painting the lush background directly from life. After completing only a few basic preparatory sketches, he sat along a riverbank in Surrey to paint the scene plein air. He spent a total of five months at the riverbank painting every detail—down to individual flower petals—directly from life. Fortunately, Ruskin’s favorable public reputation influenced a growing appreciation for the Pre-Raphaelite Brotherhood’s naturalism, and as a result, Millais’ Ophelia enjoyed public approval.

When John Everett Millais painted Ophelia, he included flowers that were mentioned in the play, as well as flowers that could act as recognizable symbols. He observed individual flowers growing by the river, and because the landscape portion of the painting took him months to complete, he was able to include all together a variety of flowers that bloom at different times of the year. In pursuit of realism, Millais also carefully rendered dead and decaying leaves.

The roses—growing on the riverbank and floating near Ophelia’s face—are inspired by the original text, in which Ophelia’s brother Laertes calls his sister Rose of May. The garland of violets that Ophelia wears around her neck is a dual symbol, representing her faithfulness to Hamlet and her tragically young death. Poppies, another symbol of death, also appear in the scene, as do forget-me-nots. The willow tree, pansies, and daisies all symbolize Ophelia’s pain and forsaken love of Hamlet.

John Everett Millais painted each flower with such precise detail that the botanical accuracy of Ophelia outpaced photography technology that was available at the time. In fact, the artist’s son once recounted how a botany professor would take students to study the flowers in Millais’ Ophelia when they were unable to venture out into the countryside to observe the same blooms in season.

When John Everett Millais was finally finished painting the outdoor scene, he was ready to depict his central figure with as much care and “truth to nature” as every leaf and flower. Millais’ Ophelia was modeled by Elizabeth Siddal—the iconic Pre-Raphaelite muse, model, and artist who also famously appeared in many works by her husband, and Millais’ colleague, Dante Gabriel Rossetti. To Millais, Siddal embodied Ophelia so perfectly that he waited months for her to be available to model for him.

To accurately simulate the drowning death of Ophelia, Millais instructed Siddal to lay in a bathtub full of water, which was warmed by lamps placed underneath. Siddal patiently floated in the bathtub for entire days on end while Millais painted her. During one of these sittings, Millais was so infatuated with his work that he didn’t notice the lamps had gone out, and the water in Siddal’s tub grew cold. After this day, Siddal became severely ill with pneumonia and threatened Millais with legal action until he agreed to pay for her doctor’s bills. Unsettlingly like Ophelia, Elizabeth Siddal died at age 32 after an overdose, just ten years after modeling for John Everett Millais.

The Legacy of Millais’ Ophelia

John Everett Millais’ Ophelia was not only a major success for the artist himself, but also for the entire Pre-Raphaelite Brotherhood. Each founding member went on to pursue interesting and illustrious careers that inspired future generations. Millais’ Ophelia also helped solidify the revered status of William Shakespeare in popular culture, both then and now. Today, Ophelia remains one of the most recognizable images in art history. Surprisingly small considering the visual details it contains, Ophelia is on permanent display at the Tate Britain in London. Millais’ magnum opus is displayed alongside a floor-to-ceiling collection of other Victorian-era masterpieces—much like it would have first been exhibited to the public over 150 years ago.