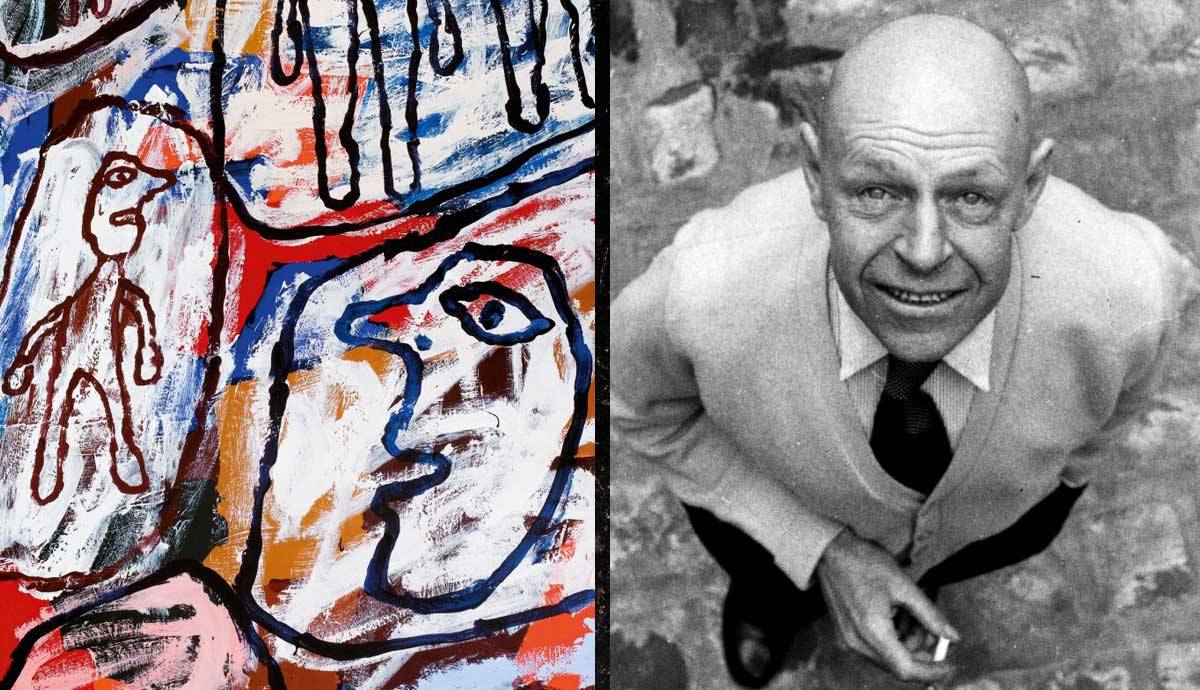 French painter and sculptor Jean Dubuffet was a monumentally important figure from the mid to late 20th century. A rebel through and through, Dubuffet took an anti-establishment approach to making art, bucking conventional or fashionable trends to follow his own path. He deliberately rejected traditional notions of beauty, skill and aesthetics for a raw, crude and expressive style of art that became known as ‘Art Brut’. We celebrate this radical, boundary pushing European artist with a list of the key facts surrounding his life.

1. His Family Were Wine Merchants

Jean Dubuffet was born into a family of wealthy wine merchants from the port of Le Havre in 1901. This was the same town where Claude Monet once grew up. After a brief spell studying painting in Paris in 1918, Dubuffet eventually became disillusioned by the strict formalism of the art establishments and quit. For the next 8 years, from 1925 to 1944, Dubuffet followed in the family trade, working as a wine merchant in the family business before venturing out to establish his own winery. The profits Dubuffet made from his wine business later financed his art career.

After a few false starts, Jean Dubuffet finally settled into the life of an artist in 1942, at the age of 41. It was a further three years later that Dubuffet began achieving wider critical acclaim for his crude, expressive approach to making art. By now he was around 44 years old. Some twenty years earlier Dubuffet had found a book featuring art by the mentally ill and psychiatric patients. The book opened his mind to an alternative way of making art away from the mainstream conventions of realism. But it took Dubuffet some time to assimilate these ideas into his own practice.

As well as looking at the art that was made in psychiatric wards, Jean Dubuffet also looked at other ‘naïve’, unschooled or ‘outsider’ styles, such as the art of children, graffitied walls and the cave paintings of Lascaux. He was particularly drawn to imagery with a crude, expressive energy, outside the convention boundaries of good taste. This approach was Dubuffet’s way of tearing apart the lofty, high-brow constraints of French culture, which he called an “ill-fitting coat,” that did not connect with real life. We see these influences particularly in Dubuffet’s figure drawings, and portraits, which feature, as he called them, “funny noses, big mouths, crooked teeth [and] hairy ears…”

Jean Dubuffet named and founded the ‘Art Brut’ style. It was Dubuffet who first coined this term in the catalogue for an exhibition of 200 artworks made by outsider artists in Paris. He wrote, “authors draw everything … from their own depths and not from clichés of classical art or that which is unfashionable.” Throughout his career Dubuffet amassed a vast collection of Art Brut which is now held in the museum La Collection de l’Art Brut in the Swiss city of Lausanne. The term Art Brut is often used to describe Dubuffet’s own art too, with its crudely textured surfaces and naïve, spontaneous scribbles and scrawls. His style had a monumental impact on the art of his contemporaries across Europe and beyond.

In line with the Abstract Expressionists, Dubuffet toyed with a whole range of different materials in his paintings. He created haute pates (high pastes) and pates battues (beaten pastes) made from a mixture of tar, asphalt, coal dust, pebbles and glass, a sticky, textured surface that he would scratch into with scrawled marks. He later went on to develop a series called Texturologies, made by shaking a brush loaded with paint over a canvas to release tiny showered droplets of paint. Dubuffet borrowed the technique from Tyrolean stonemasons, who would use this process to soften the color of fresh plaster. For Dubuffet, the process created a surface full of “teeming matter, alive and sparkling… [resembling] galaxies and nebulae…” From 1962 onwards the artist worked on his famous ‘l’Hourloupe’ series, made from doodled lines and limited patches of color.

6. Jean Dubuffet Concentrated on Sculpture in His Later Years

Given the weighty, textural surface of his paintings, perhaps it’s no surprise that Dubuffet moved on to sculpture in his later years. His projects have included moveable paintings on wheels, public art sculptures, towers and even architectural schemes. Many related to the artist’s famous ‘l’Hourloupe’ series, echoing the same linear, graphic style.