Mexican religion is known today for the Virgin of Guadalupe tradition. This is all because of a single visionary named Juan Diego — or is it? 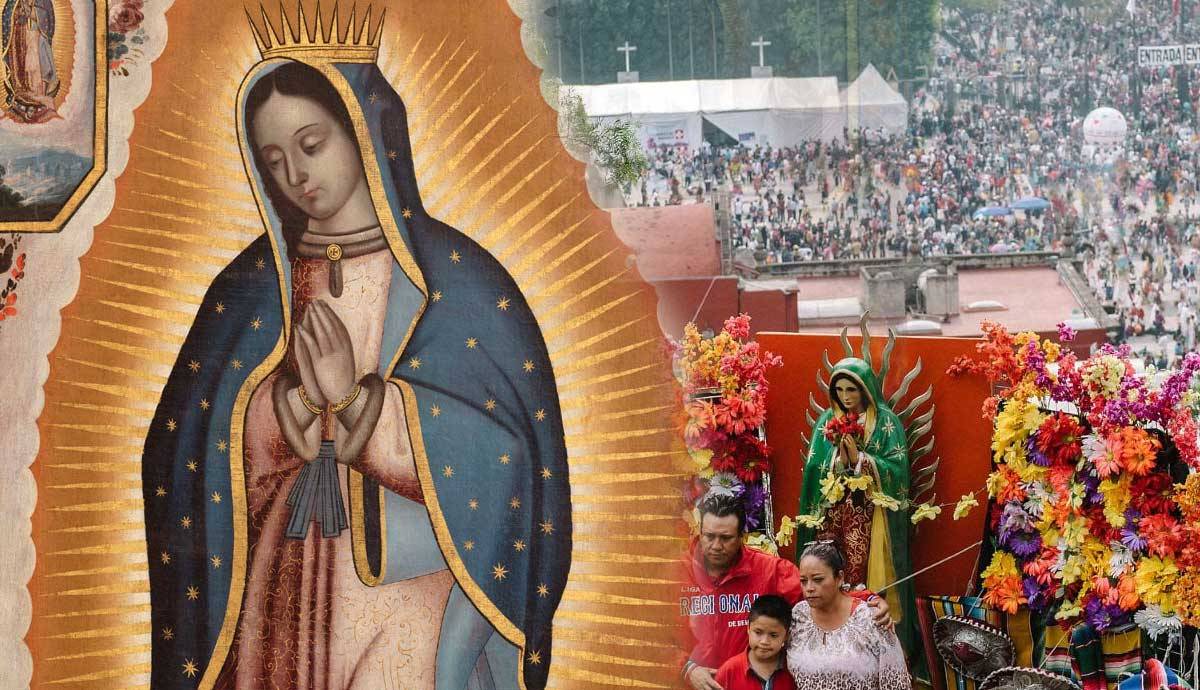 Vibrant and colorful. How else can someone describe the religious practices of Mexico? From November’s Day of the Dead celebrations to the ostentatious interior of the Metropolitan Cathedral in Mexico City, pieces of religious devotion are everywhere. One particular tradition stands out for its international reach: the Virgin of Guadalupe. The image of the Virgin Mary has proven itself especially powerful throughout Catholic history, and this is absolutely the case in Mexico. The Virgin of Guadalupe is so popular, in fact, that it has been called an emblem of Mexican national identity. Catholics from all walks of life — from popes to international tourists and locals — have visited the shrine by the millions every year. The COVID pandemic may have cancelled the 2020 celebration, but even that could not break the spirit of the pilgrimage for long. So how, then, did the Virgin of Guadalupe tradition start? To answer this question, we will examine Juan Diego, a sixteenth-century Indigenous convert who was declared a saint in 2002.

Yet the very figure of Juan Diego leads us to ask more questions. Who exactly was he? Did he even exist as we think he did? This is the story of Mexico’s first Native Catholic saint.

Before Juan Diego: The Colonial Beginnings of Mexican Catholicism

Mexico’s colonial period (1519-1821) is fascinating all by itself. The era brought Europeans and one of North America’s greatest Indigenous empires — the Aztecs — into contact for the first time. By all accounts, it was a bloody meeting. Millions of people lost their lives, especially on the Indigenous side. War was not the only source of regional misery, either. Diseases, which the invaders had inadvertently carried with them across the Atlantic, claimed even more casualties. By the time Spain and its local allies destroyed the Aztec capital of Tenochtitlán, huge areas had been transformed into depopulated ruins.

Although Spanish colonization may have been largely a military and economic affair, it also had a distinct religious dimension. The Spanish monarchs had only recently defeated their Muslim enemies in Europe (in 1492), reestablishing the primacy of Catholicism in Iberian lands. They sought to Christianize the “New World” as well.

Franciscan and Dominican missionaries were the earliest to reach the freshly conquered “New Spain,” just a few years after the Aztecs’ defeat. In 1531, Mexico’s first bishop, Juan de Zumárraga, would meet an Indigenous man whose claims of a miracle would alter the course of Mexican religious history — Juan Diego.

The Visionary Behind the Tradition

With Juan Diego, it can be hard to separate solid historical fact from religious devotion. Still, Church tradition paints a very detailed portrait of the man. Born around 1474, his original name was Cuauhtlatoatzin (“speaking eagle” in the local Nahuatl language). It wasn’t until 1524 that he would first be exposed to the Roman Catholic Church. At fifty years old, Cuauhtlatoatzin was baptized by the Franciscans, becoming Juan Diego.

In December 1531, Juan Diego was making the long walk to Mass when the Virgin Mary suddenly appeared to him on Tepeyac Hill, near Mexico City. Mary said that that she wanted a shrine built on the hill, telling him to go to the city’s bishop, Juan de Zumárraga. Juan Diego did just that but was not met with the reaction he hoped for. Zumárraga wanted proof of this miraculous vision. Doubting himself, he walked back home, when Mary appeared to him again. She reassured him and told him to revisit Zumárraga the next day. Once again, the bishop wanted proof, but he was a little more curious now. He sent his entourage to secretly follow Juan Diego, hoping for a sign from Mary along the way.

The Later Apparitions and Zumárraga’s Proof

However, Juan Diego did not revisit Zumárraga as instructed. His uncle, Juan Bernardino, was now very sick. According to one version of the story, Juan Diego tried to avoid seeing Mary at Tepeyac Hill, afraid that she would order him to return to Zumárraga despite his uncle’s sickness. Yet the Virgin appeared on the hill anyway. Juan Diego explained his circumstances, and to his surprise, Mary offered healing words. She told him, “Do not be concerned, do not fear the illness… do not let your uncle’s illness worry you, for he will not die of what he now has.” Juan Bernardino saw her himself at that moment, curing his disease. Beyond thankful, Juan Diego left to follow the Virgin’s instructions, collecting flowers from the hill for her. She attached them to his tilma (an Indigenous Mexican cloak), and he departed to visit Zumárraga.

Now the bishop would finally see the miracle for himself. At the bishop’s palace, the flowers on Juan Diego’s tilma fell off, revealing an image of the Virgin Mary in their place. Zumárraga burst into tears, begging Mary for forgiveness for his skepticism. A few days later, he authorized the construction of a shrine on Tepeyac Hill, exactly where Juan Diego had described.

The Sources for Juan Diego and Our Lady of Guadalupe

Historians love to analyze primary source materials; it forms the basis of their scholarly work. However, primary sources for Juan Diego and his encounters with the Virgin Mary are hard to come by. At present, none have been firmly dated to Juan Diego’s own lifetime. The two sources with the earliest confirmed dates of publication were not written until the 1640s — one hundred years after Juan Diego’s death in 1548. What could this mean for our understanding of the Marian visionary?

One source, the Huei tlamahuiçoltica by Luis Laso de la Vega, has been published in English translation. Its level of detail is intriguing, but its descriptions of Juan Diego himself are often frustrating. De la Vega repeatedly refers to Juan Diego as a “humble commoner” and a “poor ordinary person”. Yet he never gives exact details of Juan Diego’s background. Given Mexico’s status as a new Spanish colony at the time, could these descriptions have been generally applied to all Indigenous converts? Or were they particular to Juan Diego himself? Sadly, we don’t know.

Question of Existence and Sainthood

For centuries, it was widely accepted in Mexico and among the Church hierarchy that the Virgin Mary really did visit Juan Diego at Tepeyac Hill in 1531. On May 6, 1990, Pope John Paul II beatified Juan Diego — the first step towards sainthood in the Catholic tradition. Twelve years later, the Pope would declare Juan Diego a saint.

However, along Juan Diego’s journey to sainthood, not everybody shared the Pope’s leanings. One historian and Catholic priest, the late Stafford Poole, argued that Juan Diego had never actually existed in the first place. After all, the primary sources for the Guadalupe event were written a century after Juan Diego’s supposed death. On top of this, no writings from Bishop Zumárraga describing his experience seeing Mary on Juan Diego’s tilma have survived. With this gap in the historical record, Poole believed the Church would be canonizing a legendary figure crafted by seventeenth century criollo (Mexican-born, ethnically Spanish) priests.

Another high-profile religious figure to question the existence of Juan Diego was the Mexican abbot Guillermo Schulenburg. As the operator of the Basilica of Guadalupe, Schulenburg was a big — although controversial — name in Mexican Catholicism. Yet in May 1996, he allegedly remarked that Juan Diego was “a symbol, not a reality” to a Jesuit-run magazine. Schulenburg later signed a letter urging the Pope to tread carefully on Juan Diego; he thought confirming a supposed legend would damage the Church’s credibility. The Mexican faithful were so angry that Schulenburg had to resign as abbot the following September.

Ultimately, people within the Catholic Church such as Poole and Schulenburg were unsuccessful. John Paul II would canonize Juan Diego on July 31, 2002. He travelled to Mexico City to deliver the final homily, anointing the Marian visionary as the patron of Indigenous peoples across the Americas. For the Catholic Church, the question of Juan Diego’s existence was permanently closed.

More Than Juan Diego: The Virgin of Guadalupe Today

In the two decades since Juan Diego’s canonization, the debate over his existence has fallen silent. But perhaps this doesn’t matter very much. In the twenty-first century, Juan Diego has become much more than a historical figure. Across societies and throughout time, stories tend to take on a reality of their own. Whether their characters actually existed or not, they become part of the history of a people or culture. For all intents and purposes, Juan Diego is undeniably a crucial part of Mexican Catholic history. The miraculous Marian apparitions and the complex cultural environment of early colonial Mexico inspired a cult following that shows no signs of slowing down.