Who Was Theodor W. Adorno? 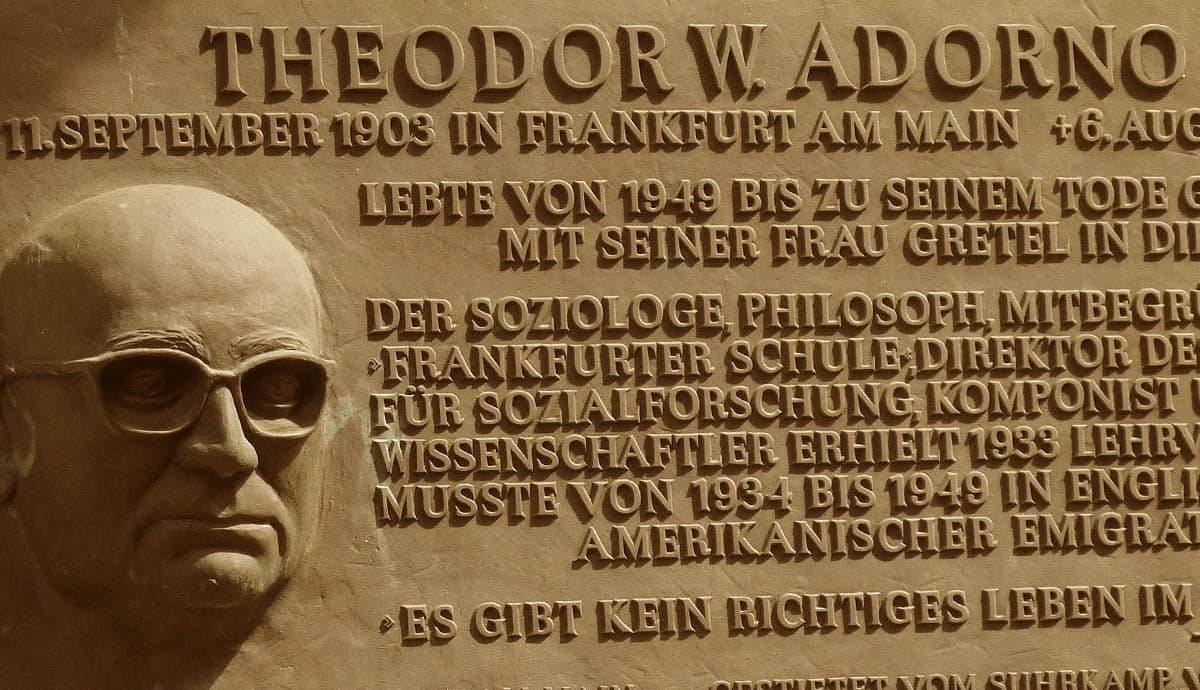 Theodor W. Adorno was one of the 20th century’s leading philosophers and social critics. He rose to prominence in post-war Germany, producing a vast body of work that encompassed a range of subjects, including sociology, psychology, and musicology. As well as working in academia, he even composed his own music on the side! A fundamental theme in all his writing was the extent of human suffering, particularly that which was brought about by the damaging structures of modern society. Let’s take a look at some of the facts surrounding his life to understand more.

1. Adorno Was Born and Raised in Germany

Adorno spent the first three decades of his life in Germany. Born in 1903 as Theodor Ludwig Wiesengrund, he was the only son of a wealthy family; his father Oscar Alexander Wiesengrund was a wine merchant from a Jewish family and his mother Calvelli-Adorno della Piana was an accomplished classical singer of Corsican heritage.

As a young adult, Adorno studied philosophy at the Johann Wolfgang Goethe University in Frankfurt. After graduating, he became a university lecturer there for several years in the early 1930s. Sadly, this position would not last long; he was expelled by the Nazis along with several of his fellow colleagues of Jewish descent. This harsh discrimination prompted Adorno to change his last name, adopting his father’s surname as a ‘W’ initial, and his mother’s surname of Adorno.

2. He Nearly Became a Composer

Adorno’s mother was an esteemed singer who had performed in Vienna at the Imperial Court, and her influence on her young son was profound. With her encouragement, Adorno learned to play Beethoven on the piano by the time he was 12, was an accomplished violinist, and began writing his own music from a young age. Adorno even studied music composition for a brief spell, and continued with music lessons on the violin and piano well into adulthood with some of Germany’s leading musicians. While Adorno’s interest in philosophy and sociology eventually eclipsed this musical career, music was an enduring backdrop to some of his most famous articles, reviews and essays.

Adorno fled Germany in 1934. First, he travelled to England, spending time as a doctoral student at the University of Oxford. This was followed by a spell teaching at Princeton University in New York, before becoming codirector of the Research Project on Social Discrimination at the University of California. While living in the United States, Adorno wrote some of his most important texts, including Dialectic of Enlightenment, (alongside Max Horkheimer) (1944), Philosophy of New Music, (1949) and Minima Moralia, completed in 1949, and published in 1951.

4. He Made His Name in Frankfurt

In 1949 Adorno returned to Frankfurt, taking up a permanent position in the University of Frankfurt’s philosophy department. While working here Adorno was an instrumental member of the Institute for Social Research, along with leading German-Jewish thinkers including Max Horkheimer, Friedrich Pollock, Herbert Marcuse and Leo Lowenthal. This pioneering group of academics were united by their commitment to Marxism and condemnation of the ugly terrors of fascism and antisemitism that had led to World War II.

5. He Was a Leader in the Frankfurt School of Critical Theory

With his colleagues in Frankfurt, Adorno led The Frankfurt School of Critical Theory. In this role, Adorno made a long-lasting contribution to 20th century philosophy, with some of the most important texts of his generation. The most prominent and influential of these was The Authoritarian Personality, (1950), a one-thousand page-long examination into the origins of fascism in society, explaining how the ‘authoritarian’ personality is often the root cause of fascism.

Adorno’s text challenged the notion of fascism as a peripheral force, instead arguing it is at the very center of the modern experience. He particularly highlighted the way ‘authoritarian’ personalities can misjudge that which is unfamiliar or unpredictable, and divide groups into ‘us’ and ‘them’, assuming that their own ‘us’ group is superior. He wrote: “intolerance of ambiguity is the mark of an authoritarian personality.” In July 2003, the city of Frankfurt erected a monument to Adorno to commemorate the importance of this text and many others, featuring a writing desk and chair encased in a glass cube, designed by Russian artist Vadim Zakharov.