HomeStoriesWojtek: The Bear who Fought for Poland in World War II

Wojtek: The Bear who Fought for Poland in World War II

During the Second World War, the Polish army, freed from Soviet captivity, found itself with a unique and memorable recruit: Wojtek the bear. 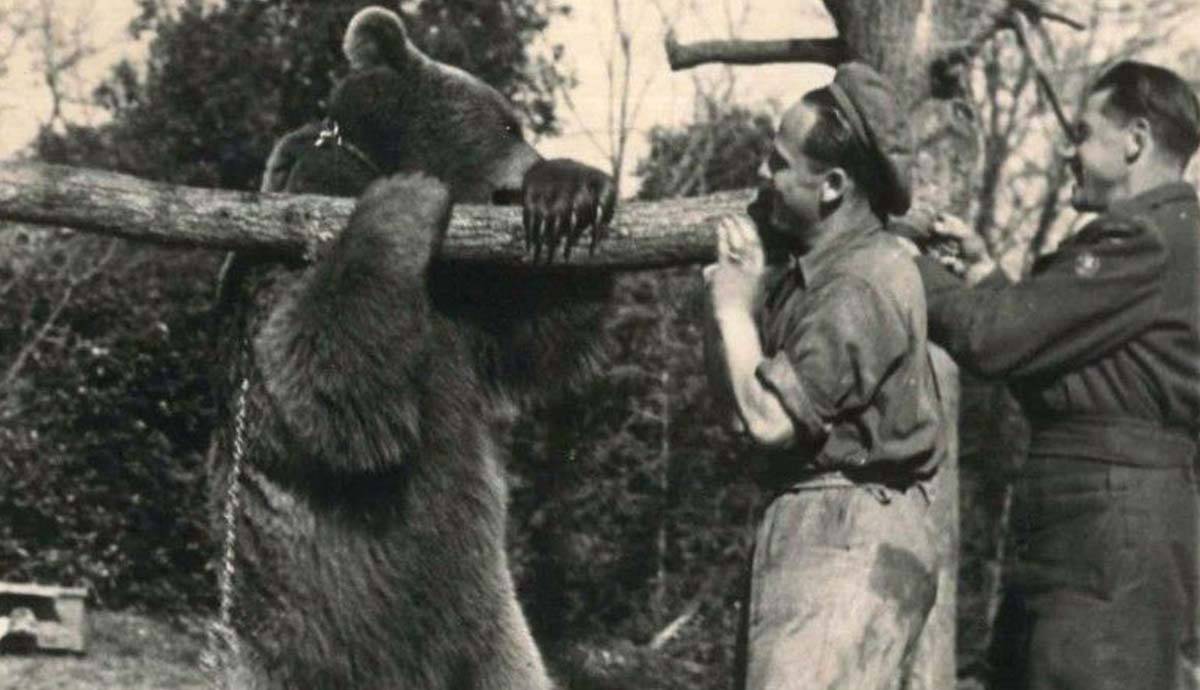 In the opening phases of the Second World War, Poland found itself invaded from two sides by both Nazi Germany and Soviet Russia. British pressure on the Soviets would lead to the freeing of many of these POWs, who would form the Polish Free Army. Although serving on many difficult and notable fronts throughout the war, it was perhaps for a different reason that the Polish armed forces were so well remembered: it was the only army to have a bear registered as an enlisted combatant and soldier. Wojtek, the Syrian brown bear, would accompany the Polish forces throughout the entirety of their maneuvers during the war. Not simply a mascot, Wojtek the bear was enlisted and even saw active service in Italy, earning himself a promotion in the process. By the end of this war, this bear would be perhaps the most known emblem of the Polish forces, more-so than any man.

On the 1st of September 1939, Nazi Germany launched its invasion of Poland, starting World War II. Despite Poland being an Allied nation to both Britain and France, the Soviet Union would nonetheless invade two weeks later on the 17th of September. Without even declaring war, the Soviet Union effectively allied with the Nazi regime and partitioned Poland between the two powers, much to the disgust of their allies in Britain and France. In the wake of this invasion, tens of thousands of Polish officers, soldiers, and political prisoners were killed in the Katyn massacre, while hundreds of thousands more, along with civilians, were deported to gulags and prison camps across the Soviet Union.

This quickly proved to be a great point of diplomatic tension. The Polish government in exile had relocated to the United Kingdom and held the Soviets rightfully responsible for their part in the invasion and occupation of Polish territory. While initially unwilling to cooperate, the German invasion in the summer of 1941 changed the dynamics of power greatly between the Allies. With the Soviets rapidly losing ground and desperate for British assistance in the form of Lend-Lease aid, Stalin’s regime quickly caved to diplomatic pressure. It invalidated its previous annexation of Polish land, which would release the vast majority of Polish citizens.

Furthermore, it was agreed that the now freed soldiers would be formed into military units, supplied by either the United Kingdom or the Soviet Union, and would serve on any Allied front where needed but would nominally be under the control of the government-in-exile even while operating within existing Allied command structures.

This army was formed under the recently-released Władysław Anders and would be commonly known as “Anders’ Army.” It quickly became clear that the Soviets, losing on all fronts, would be unable to provide enough supplies to equip or even feed the newly freed Poles, who numbered somewhere around 100,000. As such, with the joint Anglo-Soviet invasion of Iran, a route became available for the Polish. It was agreed that they would be transferred out of the Soviet Union, through the Middle East, and into British command. During the journey, they would lose countless soldiers and civilians to hunger and exhaustion, but at the same time, they would gain a member who would soon become their famous figurehead.

Wojtek the Bear Enlists in the Army

In the city of Hamadan, in western Iran, Wojtek met his new family. Found by a boy who believed that hunters had killed its mother, the Syrian brown bear cub was taken to the city’s train station, as many merchants and vendors would do in the hopes of making some income from the passing soldiers. Having caught the eye of a young great-niece of one of the Polish officers, the bear was bought, still in its infancy, and handed over to the girl for care as the Polish settled into a temporary refugee camp in Tehran. For three months, the young girl cared for the cub before he was turned over to a branch of the Polish artillery supply corps. Here, he was finally given the name Wojtek, a nickname for the more common Polish name, Wojciech, meaning “Happy Warrior.”

Rather quickly, Wojtek’s life in the army would start to be reflected in his upbringing, as much of the food he was served was similar to what the soldiers ate. Further proof that the military was not the best of environments for a young, easily influenced youth like Wojtek could be seen as the bear quickly developed a taste for beer, cigarettes (either smoked or eaten), and morning coffee, three staples with which soldiers the world over were well familiar.

Wojtek’s upbringing continued to reflect the lifestyle of a soldier. He grew very fast and was soon large enough to wrestle with the soldiers for fun. A dedicated caretaker was assigned to his well-being. However, his smoking habits continued as he emulated the soldiers around him and even went so far as to march on his hind legs alongside the other soldiers in formation. Wojtek proved popular with both civilians and soldiers, quickly becoming an icon for the 22nd Artillery Supply Company, which would later be assigned to the Polish II Corps under British command.

In the wake of the German-Soviet invasion, Poland’s people and military had been scattered. While many Polish airmen and ground crew had been evacuated along with much of the Polish navy, its ground forces were far less fortunate. As mentioned before, a massive portion of Polish soldiers and civilians had been interred by the Soviets. Another portion managed to flee to France, where they were quickly organized into the Polish Army in France, often known as “Sikorski’s Army” after its commander, Władysław Sikorski.

Numbering roughly 84,500 at its highest, they would participate in the 1940 Battle of France, with somewhere between 25,000 to 35,000 managing to escape to England, where they would be reorganized once again. The Polish Armed Forces in the West comprised both the soldiers who had fled to England and Anders’ army raised in the Soviet Union. Together, these soldiers formed the only truly loyal Polish forces in service to the government-in-exile. In contrast, all later Polish armies in the Soviet Union were little more than puppet forces to the communist regime.

In 1942, the 3rd Carpathian Division was formed in North Africa, composed of Polish units who had fled from Poland during the invasion through Romania. This force served across the North Africa Campaign as part of the British Eighth Army, present from as early as 1941, participating in the Siege of Tobruk. With this already battle-hardened division to which Anders’ army would be attached, the Polish II Corps was created in 1943. Stationed in Egypt over the winter, the newly formed II Corps would miss the start of the Allied invasion into Italy as it was reformed into its own independent unit.

Finally, in early 1944, Wojtek’s unit, the 22nd Artillery Supply Company, along with the rest of the Polish II Corps, was transferred to Italy. There was only one problem: British regulations forbade mascot and pet animals from boarding. Instead of leaving their beloved Wojtek behind, the Polish circumvented this rule by drafting him into the unit at the rank of private, listed as a soldier. Wojtek was, for all intents and purposes, Wojtek was now an enlisted and active military personnel.

Arriving in Italy, the Poles found themselves quickly involved in one of the war’s most hard-fought battles, the Battle of Monte Cassino. The Allies had been stuck trying to break the German lines at Cassino for just under four months. They had assaulted and been thrown back three times before.

Arriving in Italy, Wojtek was now considered a true part of the Corps. He had been provided with his own serial number and paybook, which was mainly put towards his cost of feeding. Not simply a mascot, however, he slept in tents and even assisted in the duties of his fellow soldiers. By this point, he had grown considerably and was somewhere in the region of 90 kilograms, or 200 pounds of almost pure muscle. Because of this, Wojtek was known to carry entire crates of artillery shells, managing to lift and hold 45kg worth of 25-pound artillery shells. Ultimately, the Polish were the first Allied detachment to actually break the stalemate at Monte Cassino, with the II Corps being the tip of the spear that pushed into the besieged and ruined monastery itself. For his service in the battle, Wojtek was not only promoted to the rank of corporal but he was adopted as the official emblem of the 22nd Artillery Supply Company, a bear carrying an artillery shell.

The battle of Monte Cassino would prove near back-breaking for the Polish II Corps, as even their support and logistics units were forced into frontline service to keep the pressure up on German lines. However, it’s doubtful that this included Wojtek. By this time, the Soviet Union had cut diplomatic ties with the rightful Polish government-in-exile. It was in the process of installing their own puppet government as they pushed into Polish territory, all while suppressing and at times imprisoning or executing pro-Polish resistance movements that had been fighting the German occupation.

Pressing on into Italy, the Polish II Corps was joined by more and more Poles liberated from prisoner-of-war camps. By the end of the war, the Polish soldiers were held in very high regard by other Western Allies as fierce fighters, and likewise, their emblem and mascot would become very well-known throughout the Allied forces.

Wojtek and the other members of the Polish II Corps faced an unfortunate reality at the end of the war as the Iron Curtain fell over Europe. The Soviet regime had been the ones who had driven the Germans from Poland and, in their wake, had installed a communist puppet state every bit as authoritarian, repressive, and anti-Polish as the one they had removed.

Vast purges occurred within Poland and the USSR, killing off or exiling many of the Polish freedom fighters to Siberia. Likewise, Stalin and the Soviet state branded the members of the Polish forces fighting in the west as traitors, and, while not necessarily barred from returning, the exiled Poles knew full well what awaited them on their return. As such, the Poles kept themselves busy in Italy until 1946, when they were, at last, moved back to Britain to be demobilized.

Wojtek had been sent ahead of them to Scotland in 1945 and arrived in his final home at the Edinburgh Zoo in 1947. He was a favored attraction for both journalists and children, appearing many times on the BBC. Perhaps his favorite visitors were the soldiers who once served alongside him, and made sure to bring him cigarettes as a reminder of their time spent together in war.

The Rise and Fall of Poland’s Solidarity Movement