HomeStoriesThe Seven Voyages of Zheng He: When China Ruled the Seas

In the early 15th century, admiral Zheng He embarked on seven epic voyages, spreading the prestige and influence of Ming China across Southeast Asia, India, Arabia, and even East Africa. 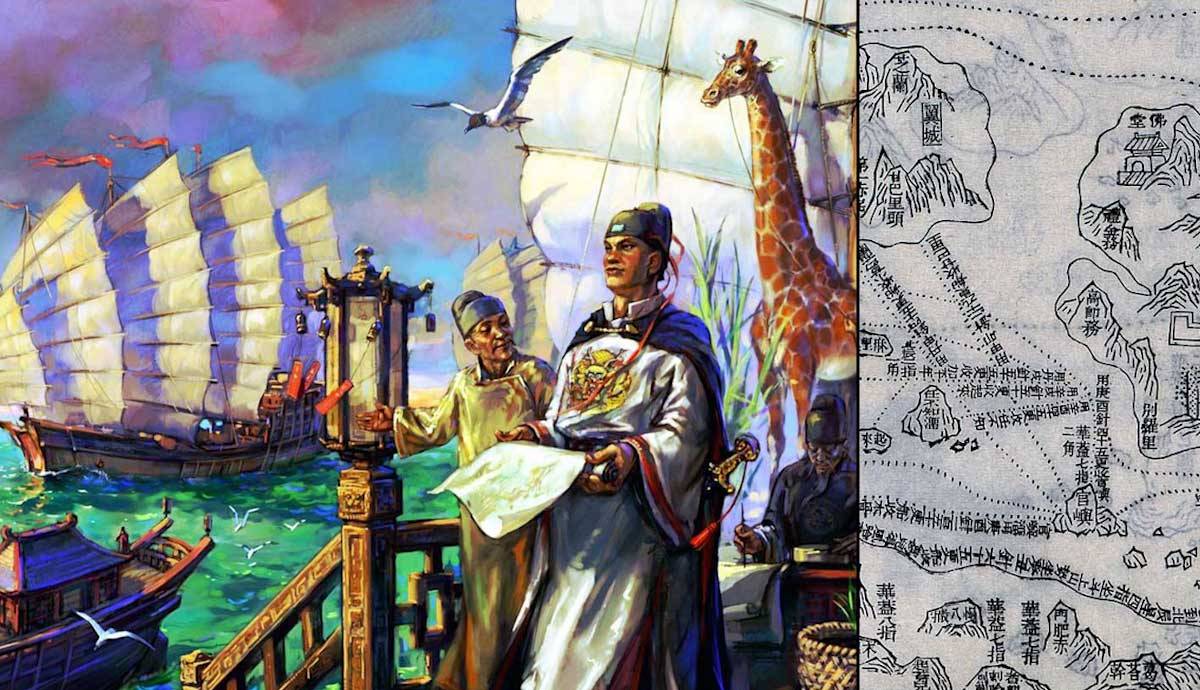 From 1405 to 1433 CE, the Chinese admiral Zheng He led seven great voyages, unmatched in history. The so-called Treasure Fleet traveled to Southeast Asia and India, sailed across the Indian Ocean to Arabia, and even visited the far-flung shores of East Africa.

Zheng He commanded a veritable floating metropolis consisting of 28, 000 men and over 300 vessels, of which 60 were enormous “treasure ships,” nine-masted behemoths over 120 meters (394 foot) long.  Sponsored by the Yongle emperor, the Treasure Fleet was designed to spread the influence of Ming China overseas and establish a tributary system of vassal countries. Although the task was successful, bringing over 30 countries under the nominal control of China, political intrigues at the court, and the Mongol threat on the Empire’s northern border, led to the Treasure Fleet’s destruction. As a result, the Ming emperors shifted their priorities inwards, closing China to the world and leaving the high seas to the European navies of the Age of Exploration.

On July 11, 1405, after an offering of prayers to the goddess protector of sailors, Tianfei, the Chinese admiral Zheng He and his Treasure Fleet set out for its maiden voyage. The mighty armada comprised of 317 ships, 62 of them being enormous “treasure ships” (baochuan), carrying nearly 28,000 men. The fleet’s first stop was Vietnam, a region recently conquered by the Ming dynasty’s armies. From there, the ships proceeded to Siam (present-day Thailand) and the island of Java before reaching Malacca on the southern tip of the Malaysian peninsula. The local ruler quickly submitted to Ming rule, allowing Zheng He to use Malacca as the main base of operations for his armada. It was the beginning of a renaissance for Malacca, which would become a strategically important port for all shipping between India and Southeast Asia in the following decades.

From Malacca, the fleet continued their voyage eastwards, crossing the Indian Ocean and arriving at the main trading ports on the southwest coast of India, including Ceylon (present-day Sri Lanka) and Calicut. The scene of Zheng He’s 300-vessel armada must have been awe-inspiring to the locals. Unsurprisingly, the local rulers accepted China’s nominal control, exchanged gifts, and their ambassadors boarded the ships, which would take them to China. On their return trip, laden with tribute and envoys, the Treasure Fleet confronted the notorious pirate Chen Zuyi in the Strait of Malacca. Zheng He’s ships destroyed the pirate armada and captured their leader, taking him back to China where he was executed.

The defeat of the pirate armada and the destruction of their base at Palembang secured the Malacca strait and the valuable trade routes linking Southeast Asia and India. Everything was ready for the second voyage of Zheng He in 1407. This time a smaller fleet of 68 ships sailed to Calicut to attend the inauguration of the new king. On the return trip, the fleet visited Siam (present-day Thailand) and the island of Java, where Zheng He got embroiled in a power struggle between two rival rulers. Although the Treasure Fleet’s main task was diplomacy, Zheng He’s massive ships carried heavy guns and were filled with soldiers. Therefore, the admiral could get involved in local politics.

After the armada returned to China in 1409 with holds full of tribute gifts and carrying new envoys, Zheng He immediately departed for another two-year voyage. Like the first two, this expedition also terminated at Calicut. Once again, Zheng He employed gunboat diplomacy when he intervened in Ceylon. Ming troops defeated the locals, captured their king, and brought him back to China. Although the Yongle emperor released the rebel and returned him home, the Chinese backed another regime as a punishment.

Following a two-year pause, in 1413, the Treasure Fleet set out again. This time, Zheng He ventured beyond the ports of India, leading his armada consisting of 63 ships all the way to the Arabian peninsula. The fleet reached Hormuz, a key link between the maritime and overland Silk roads. The smaller fleet visited Aden, Muscat, and even entered the Red Sea. As these were predominantly Muslim lands, it must have been essential for the Chinese to have specialists in Islamic religion onboard.

Once again, Zheng He got entangled in a local conflict, this time in Samudera, on the north coast of Sumatra. The Ming forces, skilled in the art of war, defeated a usurper who had murdered the king and brought him to China for execution. The Ming had focused all their efforts on diplomacy, but when it failed, they secured their own interests by employing the mighty Treasure Fleet against potential troublemakers.

In 1417, the Treasure fleet left China on its longest voyage to date. After it returned various foreign dignitaries to Southeast Asia, Zheng He crossed the Indian Ocean and sailed to the coast of East Africa. The armada visited several major ports, exchanged gifts, and established diplomatic relations with the local leaders. Among the vast quantities of tribute brought back to China were many exotic animals — lions, leopards, ostriches, rhinoceroses, and giraffes — some of them seen by the Chinese for the first time. The giraffe, in particular, was the most peculiar, and the Chinese identified it as a qilin — a legendary beast that in ancient Confucian texts epitomized virtue and prosperity.

However, while the giraffe could be interpreted as an auspicious sign, the Treasure Fleet was costly to maintain and keep afloat. After Zheng He returned from the sixth expedition in 1422, (which also visited Africa) he discovered that his patron and childhood friend — the Yongle emperor — had died on a military campaign against the Mongols. The new Ming ruler was less welcoming to what many courtiers considered expensive far-flung cruises. In addition, the Mongol threat in the north required vast funds to be diverted for military expenditure and the rebuilding and expansion of the Great Wall. Zheng He retained his position at court, but his naval expeditions were halted for several years. The new emperor lived only a few months and was succeeded by his more adventurous son, the Xuande emperor. Under his leadership, Zheng He would make one last grand voyage.

Almost ten years after his last voyage, Zheng He was ready for what would became the Treasure Fleet’s final voyage. The great eunuch admiral was 59 years old, in poor health, but was eager to sail again. So, in the winter of 1431, more than a hundred ships and over 27, 000 men left China, sailing across the Indian Ocean and visiting Arabia and East Africa. The primary purpose of the fleet was to return the foreign envoys home, but it also solidified the tributary relationship between Ming China and over thirty overseas countries.

On the return trip in 1433, Zheng He died and was buried at sea. The death of the great admiral and seafarer reflected the fate of his beloved Treasure Fleet. Faced with a continuous Mongol threat from the north and surrounded by powerful Confucian courtiers who had no love for “wasteful adventures” the emperor ended the naval expeditions for good. He also ordered the dismantlement of the Treasure Fleet. With the eunuch faction defeated, the Confucians sought to erase the memory of Zheng He and his voyages from Chinese history. China was opening a new chapter by closing itself to the outside world. In an ultimate act of irony, Europeans began their voyages only a few decades later. Soon, they dominated the high seas, eventually leading to the European arrival in China as the superior power.