Sommeliers are the museum curators of the wine world, finding unique bottles and hidden gems to showcase. Here are 10 of the world’s most admired sommeliers! 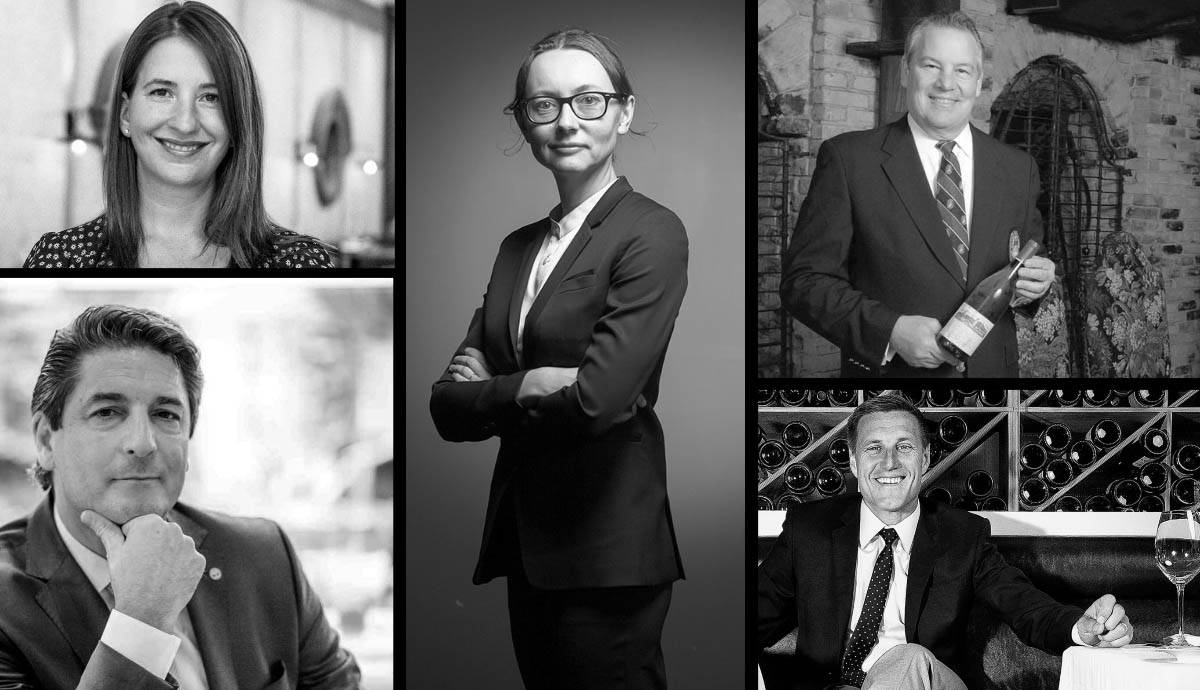 When you go to the world’s most renowned restaurants, you are served incredible, luxurious food made by the world’s most famous chefs. Likewise, the wine selection you are presented with is put together by the world’s most respected sommeliers. Their job is to select wines for the restaurant, pair them with the right food, and create a wine collection that the most avid wine collectors would be jealous of. Interested in becoming a sommelier? Make sure to scroll to the end of the article for my personal tips on certifications and more.

Aldo Sohm began his wine education in his native Austria in 1998 and was quickly crowned the Best Sommelier in Austria from 2002 to 2006. Following this success, he moved to the United States. In 2007, he won the Best Sommelier in America title, and in 2008 he became the Best Sommelier in the World. At the same time, he was moving up the ranks in the New York City restaurant world, beginning with his work at Eric Ripert’s Le Bernardin restaurant. His cellar there has grown to over 1,000 selections and an inventory of around 15,000 bottles with a focus on Burgundy, Bordeaux, Austria, Germany, California, and Champagne. They have vintages dating back to 1875, allowing you to drink not just one, but two centuries away from the present.

Born and raised in Calcutta, India, Rajat Parr became one of the world’s first celebrity sommeliers. Starting as a food runner in San Francisco, he worked his way up to become the Beverage Director at Michael Mina Restaurant Group. His fame truly began when he started running the wine program at the acclaimed RN74 restaurant in San Francisco. He was instrumental in bringing Burgundy into the forefront of America’s wine world, where it is now an incredibly collectible and highly allocated product. RN74, in fact, was until recently the name of a road going through the heart of the Burgundy wine region. He is now a part-owner in three different wineries called Domaine de la Cote, Sandhi, and Evening Land. In addition, he is a James Beard Award-winning author of multiple wine-related books.

James Lloyd’s career as a sommelier began at Restaurant Gordon Ramsay in 2002 and has come full circle as he became the Head Sommelier at the same restaurant. In between, he helped open a restaurant for Gordon Ramsay in New York and did some winemaking in Piedmont, Italy. He also worked at multiple London-area fine dining establishments including The Berkeley and The Dorchester. In 2016, upon his return to Restaurant Gordon Ramsay, he expanded their wine program, focusing on wines with maturity and collectible wines that were ready to drink. His list has over 100 bottles that cost over $1,000 and the First-Growth Bordeaux dating back to 1900. Lloyd has also come across exceptional wines throughout his career like the 1894 Chateau Mouton-Rothschild and the 1899 Chateau Latour.

Born in the Loire Valley in France, Pascaline Lepeltier started her career in wine at L’Auberge Bretonne, where she was named the Best Loire Valley Young Sommelier. After her stint there she moved on to Rouge Tomate in Brussels and interned with George V in Paris. In 2009, she moved to New York City as the Beverage Director of the Rouge Tomate Flagship in Manhattan. There, she became known for her natural wine evangelism.

She also became one of the youngest women ever to pass the Master Sommelier exam in 2014. Her wine list at Rouge Tomate was named the best wine list in the world in 2017. In 2018, she became a managing partner at Racines NY. At Racines she oversees a 2500+ bottle wine list focused on organic, biodynamic, and natural wines from around the world.

The first American to pass the M.S. exam, Fred Dame went on to found the examining body in the US, the Court of Master Sommelier’s America. This has since become the leading group in the world for the CMS. However, his wine career began at The Sardine Factory in Monterey, California in 1971. He had taken a summer job there during college. He returned every year, spending the rest of his summers working there and learning the ins and outs of the restaurant industry.

In 1973 at the age of 23, Dame was offered a position as the general manager and was asked to build a new wine program from a blank slate. Years later, while Fred no longer works at the restaurant, they still have 15,000 bottles with 1,800 selections, some of which date back to when Fred was still working there. He was instrumental both in building the reputation of the Napa Wines and turning the Court of Sommelier’s America into what it is today.

Laura Maniec’s career in wine began when she was a teenager working in restaurants. This led to her getting an Associate’s Degree in hospitality management at a community college. This was followed by stints at other restaurants in New York and Las Vegas. Her opening of Corkbuzz in Union Square, New York City in 2011 made her a nationally recognized name in the wine world. With wine classes held almost nightly, Corkbuzz has become a new wine collector’s dream. Guests have the opportunity to try bottles they may never be able to get on their own or try new regions they haven’t even heard of.

Bobby Stuckey, the owner of Frasca Food and Wine in Boulder, has had a distinguished career working at restaurants with incredible wine programs. After working in his native Arizona, he began to work as a sommelier at The Little Nell in Aspen in 1995. Following his five years there, he started working for Thomas Keller’s The French Laundry in 2000, where he worked for three years. He then began Frasca Food and Wine in 2004, the same year he received his Master Sommelier Certification.

Since then, Frasca won numerous James Beard Awards and is now a staple restaurant in the area. Stuckey’s wine list has a very unique and original concept, in that it is almost solely focused on wines from Friuli, where the term Frasca comes from. With over 600 different selections, this collection gives you the opportunity to explore a single wine region.

Gerard Margeon is a quiet, soft-spoken sommelier with a hugely important job: He is the Wine Director for the Groupe Alain Ducasse. He oversees 15 different concepts, 23 sommeliers under his control, and 5000 different selections of wine across all the restaurants. He has wine in his blood, having been born in Burgundy at the Hospices de Beaune in 1961. The most important moment in his career was his meeting Alain Ducasse in 1993, who offered him the Head Sommelier position at Louis XV Restaurant in Monaco. There, he helped build an incredible collection, often ranked the best in the world, before taking over as the wine director for all the restaurants in 2000. At Louis XV, the wine cellar, which was built over 150 years ago, holds a staggering 400,000 bottles, with well over 1,000 different wines.

In the heart of Vienna is the hotel Palais Coburg, with 35 luxury suites and a world-renowned dining establishment. However, below the hotel is a behemoth: 6 wine cellars, 60,000 bottles, and 5400 different wines represented. All of this is managed by Wolfgang Kneidinger, who upon taking over as the Head Sommelier was given the task of expanding the wine cellar’s selection. He took the job happily and expanded the cellar with $21 million dollars in new inventory. The cellar has some of the world’s rarest and oldest wines in it. This includes Port from the 1790s and a bottle of what has been certified as the oldest drinkable wine in the world: a 1727 Rudeshiemer Apostelwein from Germany. This is a collector’s mecca, and they offer multiple food and wine pairing experiences to take it all in.

Ronan Sayburn has been in the wine industry for over twenty years and during that time he has worked for a number of legendary restaurants in London. These include The Dorchester, Pied a Terre, The Savoy, Hotel du Vin, and many others. He was also the wine director of the Gordon Ramsay Group for eight years. Sayburn attained his Master Sommelier Certification in 2005. He now works at 67 Pall Mall where he is also focused on educating their 17 sommeliers.

In addition to his education work, Sayburn has built upon the already considerable 5,000 selection cellar at 67 Pall Mall with an astounding 750 by-the-glass options. His focus on the wine list is on Bordeaux, Burgundy, Tuscany, and Piedmont. However, Sayburn has been known to venture into lesser-known regions for events and special occasions too.

How to Become a Sommelier

Likewise, the WSET has four levels as well to attain the WSET Diploma, after which an individual can apply to the Master of Wine program through the Institute of Masters of Wine. Upon completion of this program, people can call themselves Masters of Wine, or MW. Both tracks, the CMS and the WSET/IMW, are years-long dives into the regions, people, and histories of the greatest wines of the world. Getting these top certifications is extremely difficult, and there are only 664 people who have either, and only 4 who have both titles.

These top-level certifications can lead to jobs that pay upwards of $150,000. In fact, the average Master Sommelier makes around $180,000 per year, and the average Master of Wine makes around $160,000, as compared to a typical sommelier who may make around $60,000. However, many sommeliers do not choose to get any certifications, and simply work their way up the restaurant ladder on their own, as some of those included on this list did. Certification or not, the World’s 10 Most Admired Sommeliers as listed above are privy to the world’s rarest and most valuable wines, and their wine collections are some of the finest in the world.

By Michael SchubertBA History, WSET 3 Certificate in WineMichael Schubert is a Sommelier, Wine Writer, and Wine Educator based in the San Francisco Bay Area. He has been working in wine for 5+ years and is extremely passionate about sharing the grape juice gospel. He has experience in restaurants, wine bars, retail wine shops, wine distributors, and wineries. He has attained the WSET 3 Certificate in Wine, and is currently a WSET Diploma Candidate. He also holds a BA in History from Santa Clara University, and is in the US Army Reserve.

10 Roman Coliseums Outside of Italy To Visit