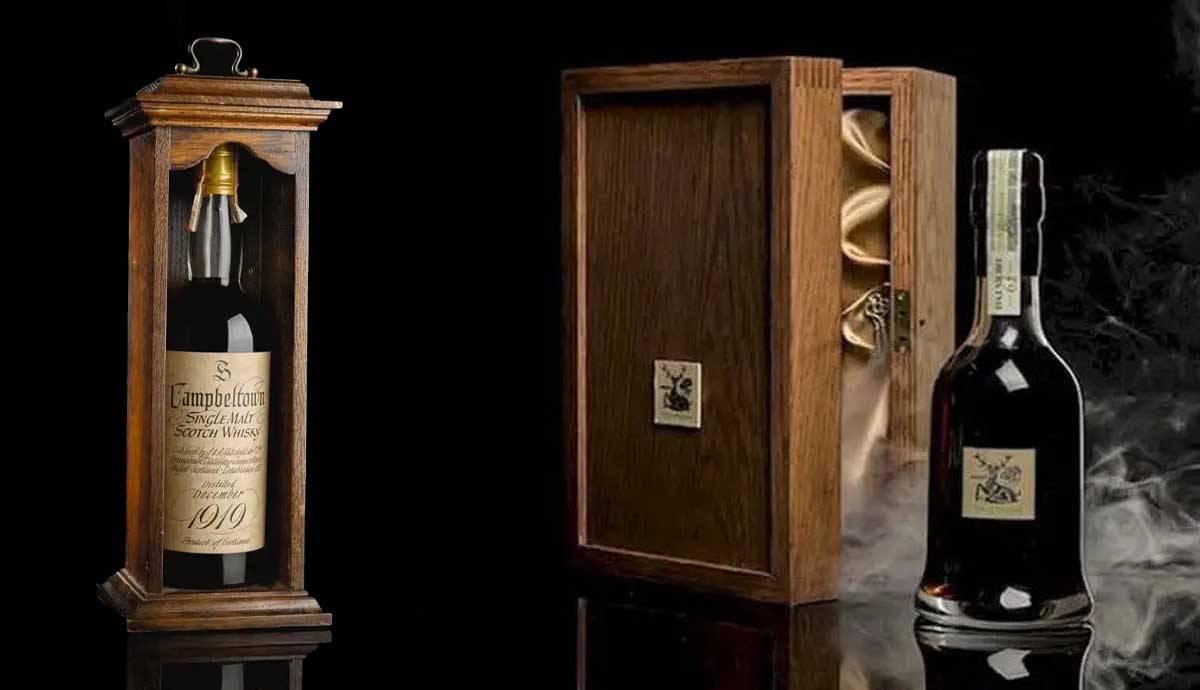 As we mentioned in Part 1 of The Collector’s Wine and Spirits series, auction houses around the world take the sale of fine wines and spirits seriously. They’re up there with elite works of art and rare antiques in terms of price and prestige.

Here, we’re listing the top 15 most expensive wine and spirits ever sold, whether in a private sale or during a recent auction, to give you an idea of how much these beverages can go for and what makes them special.

Spoiler Alert: Every bottle of alcohol on this list sold for more than $150,000!

When a Chinese businessman bought this bottle of scotch whiskey in 2011, it became the most expensive bottle of whiskey ever sold. The businessman purchased it at Singapore’s Changi Airport, a rather unglamorous way to buy such luxurious scotch.

When this single-malt whiskey went to auction in 2011, it was the oldest whiskey to ever be made available to the public. It supposedly has an incredibly unique taste and was distilled back in 1957.

This single malt from Spain is incredibly rare. It was aged in a sherry-seasoned oak cask giving it a unique flavor. It sold for 144,000GBP at a 2018 Christie’s auction.

In 1953, this 21-year-old scotch whiskey was released to commemorate Queen Elizabeth’s coronation. Sixty years later, this tribute bottle was released and included a combination of rare whiskeys from the distillery warehouses, creating what’s been described as “liquid history.”

In honor of Queen Elizabeth’s 60th birthday, only 330 Baccarat crystal bottles of this Johnnie Walker whiskey was produced. The Queen herself was given a free bottle but for mere commoners, it sold for $200,000 apiece.

This 1907 vintage champagne has an incredible history that caused its price to soar ($275,000 at an auction in the Ritz Carlton, Moscow, 2020). Originally destined for Tsar Nicholas II’s Imperial Court of Russia, this champagne was salvaged from a shipwreck (1997) in the Gulf of Finland that was sunk by a German torpedo during World War I. No one’s sure of how it tastes after all those years under the sea, but its history alone makes these bottles extremely valuable.

As the Asian art world expands and gains international attention, their rare wine and spirits are also making a dent at art auctions. This 50-year-old whiskey sold in 2018 at Christie’s for $298,879 and is considered “one of the oldest, rarest, and most singular expressions of Japanese spirit in existence.”

At the time of its auction in November 2010, this six-liter imperial size bottle of rare French Bordeaux wine set the world record for the most expensive single bottle of wine. Sold at Christie’s, Geneva, for $304,375 to an anonymous collector.

This Springbank 1919 rare whiskey once held a Guinness world record as the most expensive in the world. This record has since been broken but the 50-year-old bottle was sold in 2019 for 266,200GBP at Sotheby’s.

Using its rarity factor, this whiskey sold for $682,000 at Sotheby’s in 2014. Only four of these bottles were ever made and this particular bottle is the only one that was signed by the principals who made it. Each bottle took 17 craftsmen and 50 hours to complete and the whiskey itself dates to the early 20th century.

Typically, vodka doesn’t make the cut when it comes to elite spirits but this million-dollar bottle proves otherwise. Although Diva Vodka is triple-refined before being poured through diamonds and Nordic birch charcoal, the hefty price tag actually comes from its bottle which is encrusted with Swarovski crystals. You can choose to purchase Diva in a non-jeweled bottle for a fraction of the price.

The Macallan Fine and Rare 60-Year-Old 1926 is now known as the most expensive wine or spirit ever sold at an auction.

It was distilled in 1926 and is one of only 40 bottles that came from cask number 263. Of those 40, only 14 were given the Fine and Rare Label making this particular bottle sold at Sotheby’s and Christie’s even more coveted.

Sure, the Henri IV Dudognon Heritage comes in an amazing bottle dipped in 24k gold and platinum, decorated with diamonds. However, the real value lies in its age. This cognac has aged in barrels for hundreds of years.

The Ley Diamante Pasion Azteca Platinum Tequila is, by far, the most expensive tequila on the market. Only 33 bottles were ever made, adding to its rarity factor and the bottle itself was designed using gold and platinum by the Mexican artist Alejandro Gomez Oropeza. It’s made from the sap of the blue agave plant where it’s fermented, distilled, and aged for six years before it even makes it to the stunning bottle.

Although reportedly priced at $3,5million, we haven’t been able to locate any evidence supporting its suggested price or a sale at this price.

This Italian liquor is by far the most expensive spirit on the market. Limoncello is a classic Italian drink made from lemons and this particular bottle, designed by Stuart Hughes of Liverpool U.K., features an 18.5-carat diamond and three single-cut 13-carat diamonds on its neck. It’s not necessarily a collector’s item on the auction circuit, but it’s incredibly expensive and tops our list.