Ancient Egypt’s most controversial ruler installed a theological revolution, married one of history’s most beautiful women, developed the arts, and was expunged by history. 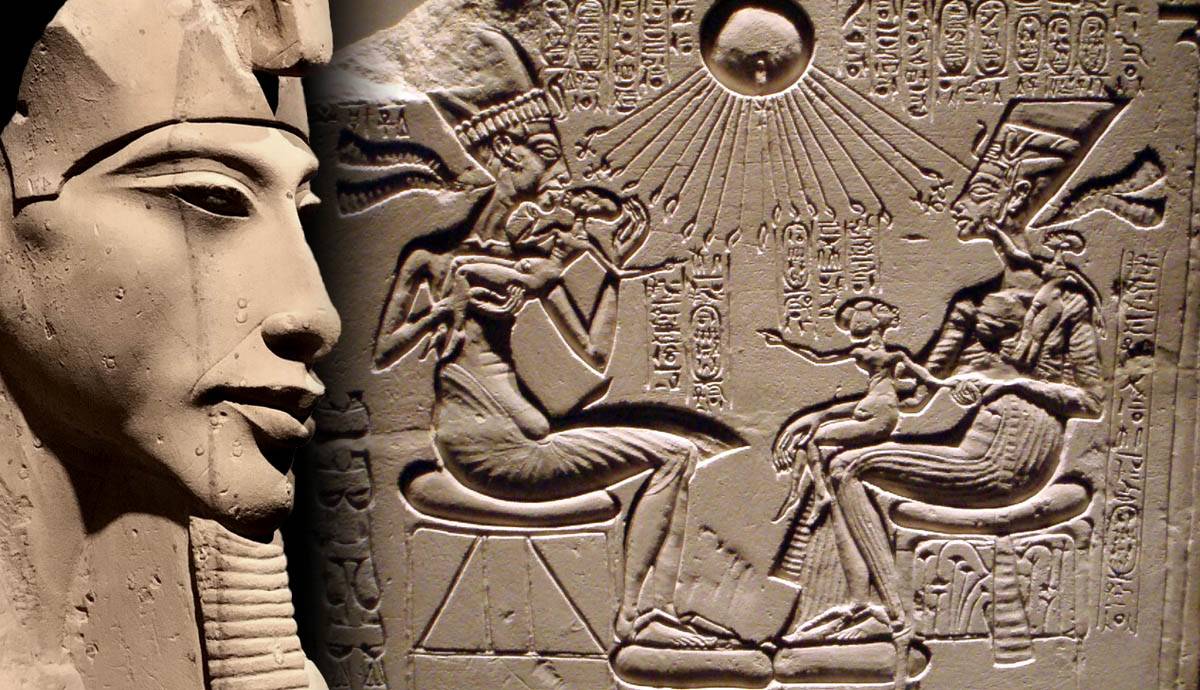 Ancient Egypt was an economic and military powerhouse with strong international relations when Akhenaten ascended the throne towards the end of the 18th Dynasty. Akhenaten means “succeeding for Aten,” the name Amenhotep IV chose for himself five years into his rule, when radically shifting religion away from the traditional gods of Egypt.

Akhenaten sought the favor of the sun disc Aten, and introduced monotheism to stifle entrenched power and limit corruption amongst the influential priesthoods, bureaucracy, and nobles. He also wanted to cement his imprint as divine ruler of Egypt.

Akhenaten moved the capital from strongholds Thebes and Memphis to the new city Akhet-Aten (now known as Amarna in the Minya province of Egypt). Akhet-Aten was purpose built for the worship of Aten, with no ties to the traditional gods of Egypt: Maat, Amun-Ra, Osiris and Isis.

The establishment of Akhet-Aten, and the desecration of holy sites such as the Temple of Amun in Thebes, meant Akhenaten waged war on the worship of Amun, which had flourished under the steady rule of his father Amenhotep III for 37 years. He also tried to erase the names of the other gods from hieroglyphs and monuments across Egypt, decreeing Aten didn’t tolerate the existence of other deities. He disbanded the priesthoods and diverted money away from Amun to establish grand temples of Aten much different in style to previous places of worship.

However, living in relative isolation at Akhet-Aten served only to separate the Pharaoh from crucial decisions, left international relations floundering, bogged down bureaucracy, and allowed other power bases to continue unchecked and conspire against him. The Egyptian people increasingly blamed Akhenaten’s rule for natural disasters, plague, an economy destroyed by the costs of a hastily built new capital, and continuing bloodshed with the Hittites.

Akhenaten ruled for 17 years. His sudden death resulted in Akhet–Aten being abandoned almost immediately. It took generations of pharaohs – his son Tutankhamun, the former general Horemheb, and Rameses the Great among them – to repair the damage caused by Akhenaten’s radical rule. He was struck from the histories as a “heretic” and enemy to Ancient Egypt, his monuments were obliterated, and temples to Aten knocked down and the stone re-used to return to the worship of traditional gods.

Nefertiti means “The beautiful woman has come,” and rivals Cleopatra as the most famous Queen of Ancient Egypt, partly due to the discovery of the bust above at the workshop of royal artist Thutmose in the ruins of Amarna.

Akhenaten’s marriage to Nefertiti is a source of intrigue. She bore him six daughters, one of whom, Meritaten, became a Great Royal Wife to Smenkhkare and is believed to have been a foster parent to Tutankhamun when he ascended the throne as a child.

Nefertiti, however, isn’t the mother of Tutankhamun. Unlike Akhenaten’s tomb, the controversial “KV 55,” Nefertiti’s tomb has never been found and positively identified, sparking argument over whether she died early, retired, or was removed from favor. Recent findings believe she outlived her husband and was involved in Ancient Egypt’s rule after her husband’s death and prior to Tutankhamun’ ascension.

Ancient Egypt was an orthodox and conservative society, but it seems clear from artifacts found in Armana and from talatat blocks recovered in Thebes after being cast down and buried face down or re-used during the rule of Horemheb, that Nefertiti had influence and independence during the rule of Akhenaten.

While great pains were taken to remove traces of Akhenaten (and Nefertiti) from historical record, their influence on art in Ancient Egypt is indisputable. Until the discovery of Amarna in the early 20th century, art was considered Akhenaten’s legacy to history.

The Amarna style revolutionized art alongside religion and kept momentum when pharaohs after Akhenaten were able to seize back control. Shackles came off artists as they veered away from centuries of strict regulation, seeking new ways to interpret the changes wrought by the Pharaoh in their work.

Stiff figures in formal poses, scenes of the military and key battles, traditional gods, and the importance of the afterlife, were now joined by depictions of family life, displays of affection, female centric art, and of course, tributes to the sun disc Aten.

Art, architecture, and information being gathered from Amarna, or now being identified correctly at other sites – adds to the Amarna style. Statuary evidence now goes beyond the royal palace of Akhenaten with examples of sculptors using the method for other individuals.

Did Akhenaton have a serious illness?

A whole section of scientific thought was devoted to figuring out whether Akhenaten had a genetic condition, an illness in childhood that left him crippled, or a physical handicap, to explain his portrayal by artisans, and revulsion by ancient historians. There were even theories that he was a hermaphrodite. Royal statues and artifacts housed in famous museums such as the Louvre, Berlin’s Museum Island, the British Museum, and the Museum of Alexandria, show Akhenaten as an androgynous figure possessing characteristics of both men and women. Wide hips, pregnancy bump, elongated skull, fleshy lips, sinuous neck, and bulbous ears fueled the speculation.

The identification of Akhenaten’s remains as belonging to the mummy in tomb KV55– it must be pointed out there is still argument about this, despite widespread scientific certainty – much of the speculation over his physical appearance has been put to bed. DNA tests and measurements of the mummy itself showed a man of normal size, with a regular-sized head and lacking genetic markers that might have made him physically different.

The great irony of the reign of Akhenaten, is that the obliteration of memory and stone caused by the Pharaohs after he paved the way for his renaissance through modern archeology.

If it were not for the abandonment of the city of Amarna, the smashing of his sculptures and monuments, the artistic interest in interpreting his physical body, and relationship to Tutankhamun and Nefertiti, Akhenaten may have been just another Pharaoh paling in comparison to Khufu, Hatshepsut, or Rameses II.

Instead, the discovery of his city, the stone footprints from his life, and the continuing mysteries about his family and the end of his rule go on, they make Akhenaten more valuable and interesting to history than he’s ever been.

Akhenaten is the sun-worshipping revolutionary ruler with big ideas, a beautiful wife, and famous son, whom people will keep looking for when they dig to find answers about Ancient Egypt.

By Jono EldertonJono Elderton is an Australian writer with a passion for Ancient Egypt. He has worked as a journalist, media manager, and English teacher. After travelling extensively worldwide and teaching in Thailand and Japan, he now lives in the outback and writes about ancient cultures, mythology, and the arts.

James Simon: The Owner Of The Nefertiti Bust