HomeAncient HistoryAtlantis’ Tragic Tale: What Is the Truth Behind the Myth? 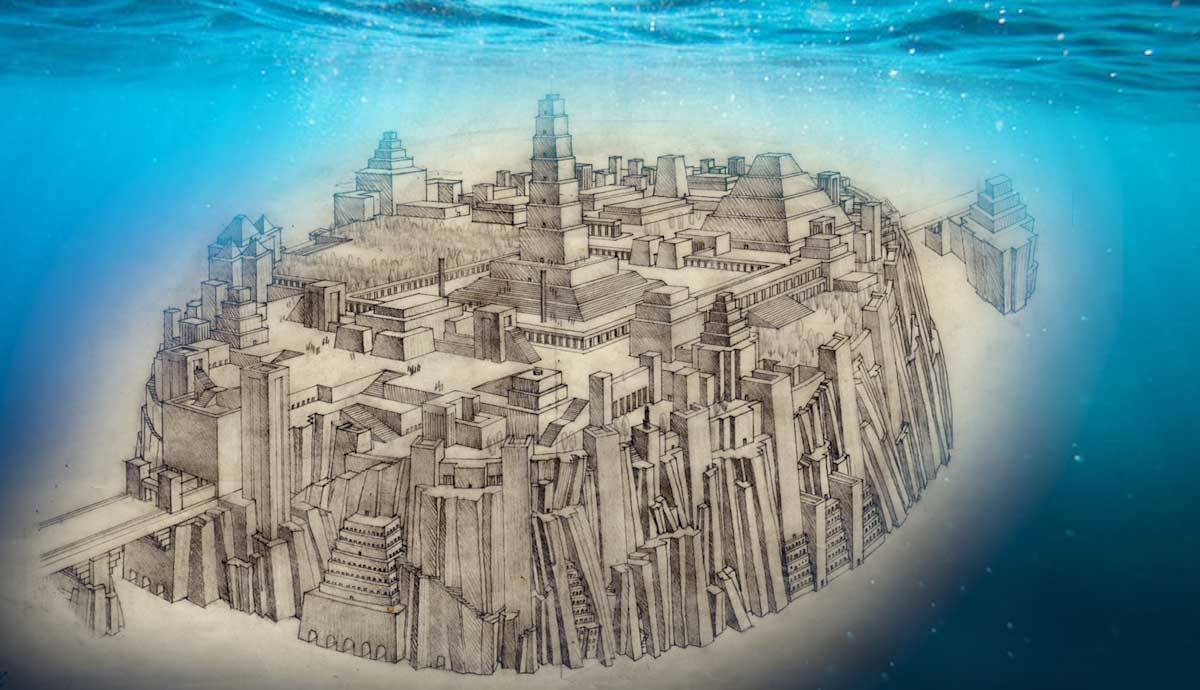 Undoubtedly, Atlantis was the most famous legendary place in the ancient world, and it has remained one of the most enduring ancient myths. Immortalized by its narrator, Plato, the story of Atlantis is a tantalizing tale: An advanced civilization that went too far in its greed, provoking the wrath of the gods who erased Atlantis from the face of the earth in one day and one night.

While the end of Atlantis came quickly, the legend persisted, becoming more popular as centuries passed, sparking the imagination of generations of scholars, explorers, artists, and pseudoscientists. As a result, this sunken island that once played only a minor role in Plato’s work has risen to become an integral element of our cultural landscape, a symbol of long-lost Utopia, still waiting to be discovered. A unique adventure beyond our wildest dreams! Although it seems that the story of Atlantis is nothing more than a moralistic tale, Plato, its creator, was inspired by historical events. After all, history can be much more fascinating than fantasy…

The story of Atlantis, history’s most enduring and probably, most influential myth, is a fascinating tale. To start with, every mention of this fabled place sounds like a blend of fantasy and science fiction. Atlantis was an enormous island, “larger than Libya and Asia combined.” It was populated by a race of demigods, led by powerful kings, who could trace their origins to none other than Poseidon, the mighty god of the seas and oceans. The Atlanteans made most of that connection, creating an advanced civilization and building enormous cities during a period when the rest of the world was still in the Neolithic. It helped that they lived in a veritable cornucopia, enjoying abundant resources, especially metals: silver, gold, and most importantly, orichalcum, the most precious gold-red metal.

As usually happens with those who have too much wealth and power, the Atlanteans also wanted more. In their lust for power, this advanced civilization declared war on all the peoples of the Mediterranean. Unsurprisingly, the Atlanteans’ mighty navy encountered little resistance and conquered and enslaved most of their technologically inferior neighbors. Yet, in their hubris, the Atlanteans underestimated one Greek city. The people of Athens not only resisted the invaders but managed to send their would-be conquerors back from whence they came. In the end, Atlanteans fell out of the gods’ favor. In a single day and night, Atlantis was destroyed by an earthquake and flood. Once a beacon of culture and civilization, the fabled island vanished under the waves, along with all its inhabitants.

Upon hearing the story of Atlantis, its hubris, and its doom, one could be forgiven for trying to place this island on a map. After all, we even have its approximate location, west of the Pillars of Hercules, or the Strait of Gibraltar, as we call it today. This sets the island in the Atlantic Ocean, or as the Greeks called it, “Atlantìs thálassa”. Yet, despite the attempts of generations of explorers and (pseudo) scientists to find this mythical place, Atlantis is, first and foremost, a myth. A morality tale invented by one of the brightest minds of ancient Greece — the Athenian philosopher Plato, who lived from the 420s to the 340s BCE.

Plato left us the only written account about Atlantis in two of his dialogues (written around 360 BCE), Timaeus and Critias. When reading the story in the broader context of Plato’s work, and history, Atlantis becomes an elaborate allegory, clearly intended to praise Athenian democracy, but also serve as a warning. During Plato’s lifetime, Athens tried (and failed) to become an Empire, engaging in a bloody war with Sparta, known as the Peloponnesian War. Thus, the story of Atlantis was actually about Athens, a morality tale intended to educate young Athenians on the dangers of power and hubris. Just as the Atlanteans became greedy, petty, and morally bankrupt, Athens risked losing the tenets of its cherished democracy and turning into an authoritarian state. The tragic fate of Socrates, Plato’s mentor, and colleague, put on trial and sentenced to death for “corrupting minds of young Athenians” was evidently still fresh in the philosopher’s mind.

The Search for Atlantis

Aristotle, Plato’s pupil, chiefly dismissed the Atlantis legend as pure fantasy. After all, the details contained in the two dialogues were too fanciful to be true. But the genius was out of the bottle, partly due to Plato’s writing style. To give his account of Atlantis credibility, Plato added another protagonist — Solon — one of the most renowned Athenian politicians and lawmakers. In the dialogues, Plato mentions that Solon heard the story of Atlantis from an old Egyptian priest in Sais. Let us not forget that Egypt held the title of the ancient world’s most advanced civilization, and its priests were admired as the keepers of this sacred knowledge.

The ploy obviously worked. In the second century CE, the Roman historian Plutarch mentioned the story in his Life of Solon. A hundred years earlier, the geographer Strabo considered the possibility that the part of the story might be genuine, and that a natural disaster inspired the downfall of Atlantis. Besides those few accounts, ancient sources rarely mentioned Atlantis. However, in the following centuries, the Atlantis myth sparked the imagination of many scholars and explorers.

The Age of Exploration during the 15th-17th centuries, shifted focus onto the Americas, resulting in countless expeditions to find traces of a lost civilization among the Mayan, Aztec or Incan cultures. Others searched for Atlanteans in the Middle East, Tibet, or even Antarctica. On the other hand, the foremost minds of the times, like Thomas More or Francis Bacon, reimagined Atlantean “utopias” in their iconic works.

Unfortunately, even pseudoscientists and occultists, including the infamous Heinrich Himmler, jumped onboard, creating fanciful theories about the lost island and its demigod inhabitants. As a result, Atlantis, this mythical sunken island that played only a minor role in Plato’s work, has become a staple of our culture, featuring prominently in books, movies, shows, documentaries, and even video games. Perhaps the most iconic retelling of the ancient myth is the downfall of the island realm of Numenor in J.R.R Tolkien’s Silmarillion.

Yet, the story of the lost civilization does not end here in the realm of fiction.

More Than Just a Myth?

The Tale of Atlantis was, first and foremost, an allegory conceived by Plato to warn his contemporaries of the dangers to democracy. But, as is often the case with ancient myths, they are based on a sliver of truth: long-lost historical events immortalized as fanciful tales. The Bronze Age Collapse and the fall of the Mycenean civilization were reflected in stories about the Trojan War, told by Homer, while the once-mighty Minoans were immortalized in the legend of King Minos, the Labyrinth, and the Minotaur.

Incidentally, the Minoan civilization on Crete is one of the prime candidates for Atlantis. Like Plato’s mythical Atlanteans, the Minoans possessed a mighty navy, which, at its apex, projected its power all over parts of Greece, the Levant, and Egypt. Then, between 1611 and 1538 BCE, the volcanic island of Thera (modern-day Santorini) came back to life in a catastrophic eruption, creating massive tsunamis that hit Crete and destroyed the Minoan navy.

However, the similarities do not stop here. Minos, the legendary first king of Crete, was considered a son of Poseidon, just like the first king of Atlantis, Atlas. In addition, historical records from Egypt record the devastation that the volcano’s eruption brought to Egypt, giving some credence to the story of the Egyptian priest and Solon.

Plato’s Atlantis (?): The Tragedy of Helike

Yet, there is an even more likely candidate, a tragic story that evokes the doom of Atlantis, and to make matters more interesting, it happened during Plato’s lifetime (!). The city-state of Helike, located on the shores of northern Peloponnese, was a major regional naval power. Its sailors navigated the Mediterranean, establishing colonies in Asia Minor and Southern Italy. Unsurprisingly for a maritime power, the city’s main deity was none other than Poseidon, whose figure was carved on coins and whose temple was second only to the sanctuary at Delphi. The massive bronze statue of Poseidon was the pride of the citizens and a work of art. Unfortunately, it was also the “bringer of doom”. When the Ionians requested a copy of the famed statue, the Helikonians refused.

Then, on one winter night in 373 BCE, Helike met its doom, mirroring the tragic fate of its legendary counterpart. Without warning, a massive earthquake struck Helike, sending the entire city to the depths of the sea. In one single night, Helike, one of ancient Greece’s major powers, disappeared from the face of the earth, along with most of its inhabitants. A massive rescue mission, consisting of over 2,000 men, failed to retrieve the bodies of the dead or the town’s enormous wealth. Centuries after the catastrophe, the submerged ruins of Helike could still be seen. During the Roman Empire, tourists frequently sailed over the site, admiring the ruins of the submerged city. Gradually, the area silted over, and like mythical Atlantis, all traces of the town vanished. Only in the late 20th century was the city rediscovered, offering us an insight into what could have been Plato’s inspiration for the legendary story of Atlantis.

Indeed, history can be more interesting than fantasy.

3 Legendary Ancient Lands: Atlantis, Thule, and the Isles of the Blessed