HomeAncient History3 Legendary Ancient Lands: Atlantis, Thule, and the Isles of the Blessed

3 Legendary Ancient Lands: Atlantis, Thule, and the Isles of the Blessed

The ancient world was a curious place where legends and reality could coexist. Ancient legends of fantastical places include tales of Atlantis, Thule, and Islands of the Blessed. 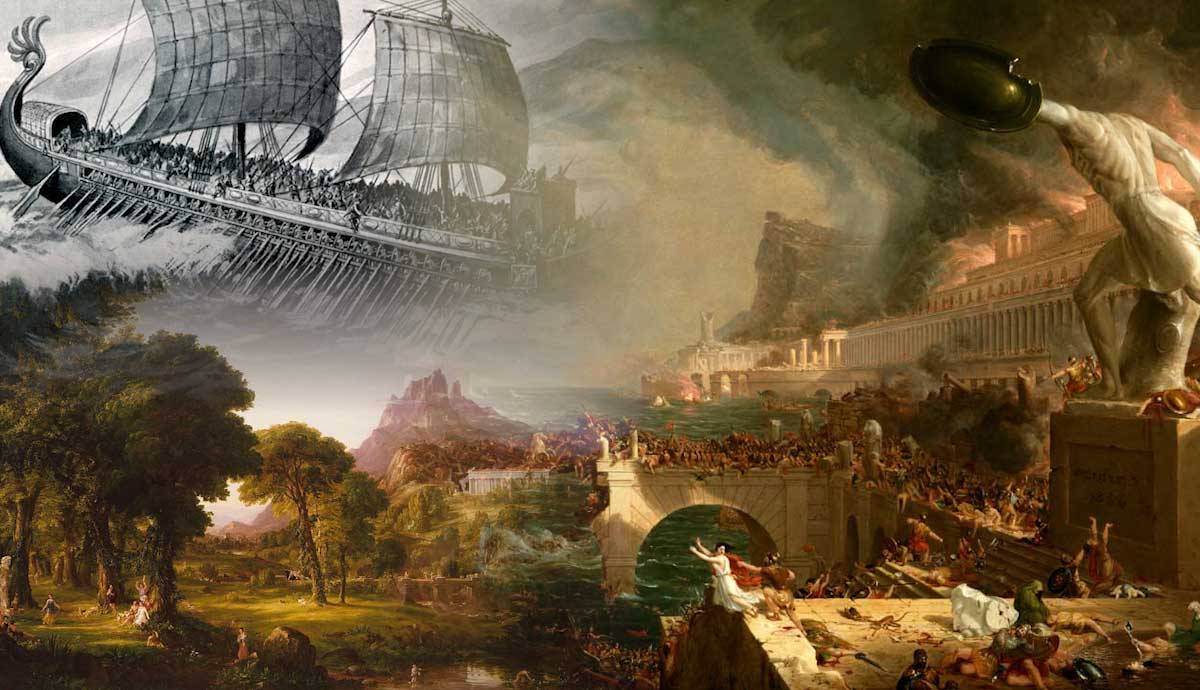 For the ancient travelers and explorers, the boundaries of geographical knowledge were narrow. People understood that they lived in the vast world but knew little of what lay beyond. The ancient Greeks traveled extensively across the Mediterranean. The Romans went even further, following the paths cleared by their conquering armies. Yet, unknown land — terra incognita — surrounded the known world. Those who dared to venture into the blank space on the map would encounter things they had never seen or even heard about before. The Ocean, seemingly without end, was a terrifying, wonderful place where legends and facts mingled, and where anything imaginable was possible. Nowhere was this more apparent than in the case of remote islands, real or imagined. Thule, Atlantis, and the Isles of the Blessed were places that were more than places, the sources of fantastical stories and myths, tempting ancient explorers to venture into the unknown and inspiring generations to follow their example.

Undoubtedly, Atlantis is the most famous legendary place from the ancient world. However, the mythical isle-continent lost beneath the waves in one day and one night was not an actual location. Instead, Atlantis was a fictional place invented by the Greek philosopher Plato for a morality tale. Plato’s story, written in the fifth century BCE and narrated in two of his dialogues — Timaeus and Critias — was never supposed to be taken literally. Aristotle, Plato’s pupil, dismissed the Atlantis legend as pure fantasy. After all, the details contained in these two dialogues were too fanciful to be true.

Plato described Atlantis as a large island-continent in the Atlantic Ocean, west of the Pillars of Hercules (Gibraltar). It was a marvelous land inhabited by an advanced and wealthy civilization. However, their knowledge and might corrupted the Atlanteans, making them vain, over-ambitious, and degenerate. Not satisfied with their splendid island, the Atlanteans declared war on all the people of the Mediterranean. However, the Athenians fought back against the invaders. In the end, the Atlanteans fell out of the gods’ favor. In a single day and night, Atlantis was destroyed by an earthquake and flood, along with all its inhabitants.

While this story is an elaborate allegory, clearly intended to praise Athens’s democracy, it seems that not everyone considered the legend of the sunken island to be a work of fiction. Writing in the second century CE, the historian Plutarch, in his Life of Solon, described the philosopher’s discussion with an Egyptian priest in Sais. During the conversation, the priest mentions Atlantis, but this time as an actual location. A century earlier, the geographer Strabo considered the possibility that part of the story might be genuine, that Atlantis was indeed an island destroyed by a natural disaster. Plato’s story could have been inspired by the actual eruption of Thera (present-day Santorini), a volcanic island, which destroyed the Minoan civilization in 1600 BCE, or by the fate of Helike, a Greek city destroyed by a catastrophic tsunami during Plato’s own lifetime.

Interestingly, ancient sources rarely mentioned Atlantis. However, in the following centuries, the Atlantis myth sparked the imaginations of many scholars and explorers. As a result, this sunken island that played only a minor role in Plato’s work has risen to become an integral element of our cultural landscape. Yet, despite Atlantis’ popularity, the claims of its actual existence remain the domain of pseudoscientists and works of fiction. Therefore, the fascinating story of legendary Atlantis, and its tragic demise, is just that, a story.

2. Thule: Journey to the Ends of the Earth

In the mid-4th century BCE, rumors spread through the city of Athens. A Greek explorer had returned with a fantastic tale of his voyage to the ends of the earth. The explorer reportedly visited a faraway island in the north, a land where the sun never set, and where land and ocean came together in a sort of jelly-like substance. The explorer’s name was Pytheas, and the island that would soon enter into legend was Thule.

Pythias recorded his voyage in the book On the Ocean. Unfortunately, only fragments preserved by later authors have survived. After departing his native Massalia (present-day Marseille), Pytheas traveled north. Whether he sailed through the Straits of Gibraltar or traveled overland, is unknown. However, we know that the Greek traveler eventually reached the British Isles, becoming one of the first ancient explorers who ventured so far north. After passing the edge of the mainland, Pytheas did not turn back. Instead, the Greek explorer claimed to have continued his journey, traveling six days north to the “farthest of all lands” — the mythical Thule. It was a land where nights were only two or three hours long, and in the summertime, there was no darkness at all. Pytheas also reported an encounter with the inhabitants of Thule, whom, in true Greek fashion, he described as barbarians, humble farmers of fair complexion with light blond hair.

Early commentators, however, doubted the authenticity of Pytheas’ voyage. Both Polybius and Strabo questioned his claims, accusing Pytheas of being a “falsifier” who misled many readers with these fanciful stories. Their skepticism is understandable, as the area was considered too far north for human habitation. Pliny the Elder, on the other hand, was more forthcoming, suggesting that Pythias indeed traveled far north and reached a legendary place. The historian Tacitus describes the voyage of his father-in-law Agricola, who, as governor of Britain, sailed north of Scotland and saw an island, he believed to be Thule.

For the ancients, Thule represented the northernmost point of the ancient world. Therefore, it is unsurprising that the famous Map of Ptolemy depicted Thule, creating a precedent emulated by generations of cartographers. The description of Thule and its surroundings gave scholars enough information to pinpoint its possible location. Some of the names proposed are Shetland, Norway, the Faroe Islands, and Iceland. The impassable slushy ice, thick fog, lack of darkness during the summer solstice, and the lack of sunlight at the winter solstice suggest that Pytheas traveled even further, perhaps to the vicinity of the Arctic Circle. However, even if Pytheas never reached Thule, it matters little. The legacy of his voyage has not been the discovery of an island. It has been the creation of a legendary place: a mysterious, distant, unfathomable land located on the very edge of the map, inspiration for the explorers and voyagers in centuries up to the present day — the ends of the Earth, the terra incognita — mythical Thule.

3. Isles of the Blessed: More Real than Atlantis?

Ancient civilizations told tales of mythical, supernatural regions, where the lines between death and life are blurred. The Greeks called it Elysium, the earthly paradise, where those chosen by the gods could live a blessed and happy life. However, Elysium was not a fixed place. Instead, it was an evolving and multifaceted idea. By the time of Plato, in the fourth century BCE, Elysium became an island or archipelago in the western ocean: The Isles of the Blessed, or the Fortunate Islands.

Roman authors took this notion even further, placing the mythical archipelago at a specific location on the map. Both Plutarch and Pliny the Elder mentioned the “Fortunate Islands,” located in the Atlantic, a few days’ sail from Spain. But it is Ptolemy who, in his landmark Geography, described the location of the Isles, using the archipelago as the reference for the measurement of geographical longitude and the Prime Meridian, which would remain in use through the Middle Ages. The Isles of the Blessed became a real place — the Canary Islands, located in the Atlantic Ocean, 100 kilometers (62 miles) west of the coast of Morocco.

Thus, the Canaries became the “Fortunate Islands,” and medieval maps often rendered that archipelago as Insula Fortunata. In addition, the arrival of Christianity shifted the paradise’s location entirely to the supernatural realm. Yet, the idea of a promised land on Earth endured. The legendary “Isles of the Blessed” remained somewhere in the west. One such mythical place was the island of Avalon, where King Arthur’s sword Excalibur was forged and where the king himself would later dwell. In the centuries that followed, Europeans continued their search for the promised land until they found it in the fifteenth century — the western continent located in the Atlantic Ocean, an “Isle of the Blessed” far beyond the imagination of the ancients — America.

Plato’s Philosophy Of Art In Ion: The Divine Madness Of Poetry