Ptolemy’s world map is one of the most iconic maps in history. Besides its tremendous importance to geography, the map reflects the Roman view of the ancient world. 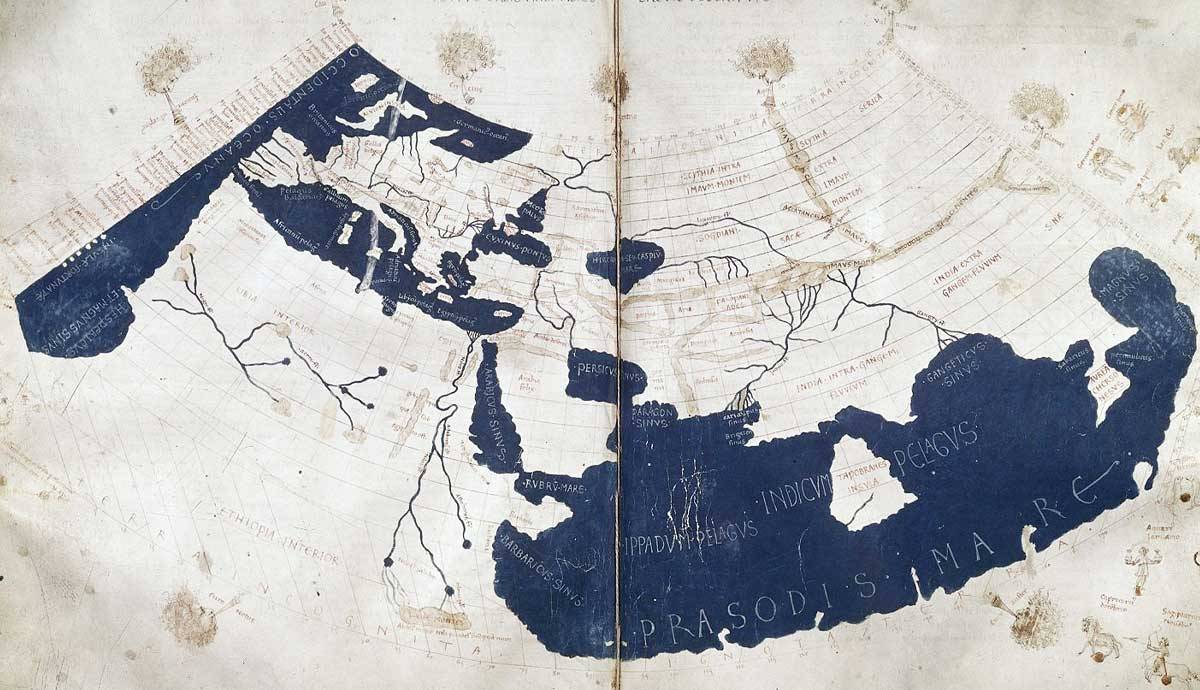 At the start of the second century CE, four great empires ruled over the ancient world. In the East, the Han Empire consolidated its power and expanded into central Asia, exporting its precious commodities along the Silk Road. In India, the Kushan Empire was advancing further into Subcontinent, creating a unique blend of Hellenistic, Indian, and Persian cultures. In the West, the Roman Empire was at its apex. The legions pushed the borders forward while the Empire enjoyed a long period of peace and prosperity — the Pax Romana. Parthia, too, held fast, allowing the Romans only limited gains, and keeping the monopoly over trade routes linking the East with the Mediterranean. Truly, this was the “Age of Empires,” an unprecedented period of optimism, inquiry, and growth for all four great powers that ruled over the vast territories of Eurasia. It was a fertile ground for the exchange of people, ideas, and knowledge. Thus, it is unsurprising that one of the most famous maps of antiquity, but also history in general — Ptolemy’s world map — was made at this time.

Here are five fascinating facts about the map that defined modern geography, and changed our perception of the world.

1. The Height of the Roman Empire

The Roman Empire in the second century CE was a fascinating place. After the turmoil and civil war that followed Emperor Nero’s violent death, the situation greatly improved during the reign of the Flavian and Nerva-Antonine dynasties. During this period, Rome reached its greatest territorial extent, with Emperor Trajan leading his legions to the Persian Gulf. The Empire was at its apex, dominating the Mediterranean heartlands and spanning three continents.

The Roman emperors encouraged long-distance trade over the Silk Road, and the merchants and expeditions ventured far beyond the imperial borders. Already in the mid-first century, the fleet of Gnaeus Iulius Agricola had sailed around the British Isles and reached the mythical island of Thule. Nero’s expedition into Sub-Saharan Africa tried to find the source of the Nile. Meanwhile, hundreds of merchant ships departed Egypt each year on the long journey to India, sailing as far as the island of Sri Lanka and the Bay of Bengal. It is unsurprising that Graeco-Roman scholars decided to chart the rapidly growing ancient world, producing a masterpiece — Ptolemy’s world map.

2. Ptolemy Was Not the Map’s Author

Claudius Ptolemaeus, or Ptolemy (ca. 100 – 170 CE), provided the foundation for the famous world Map. However, the famed astronomer, mathematician, and geographer was not the map’s author. Instead, Agathodaemon of Alexandria was credited as the map’s creator. Using all eight books of Ptolemy’s Geography, Agathodaemon delineated the whole ancient world known to the Romans. Both Agathodaemon and Ptolemy lived in Alexandria in the second century CE. Perhaps they even cooperated, as Alexandria was the intellectual powerhouse of the Graeco-Roman world.

Following the conquest of Alexander the Great and the formation of the Hellenistic kingdoms in the fourth century BCE, the city on the Nile became an intellectual and scientific hub, a meeting place of the greatest minds of the ancient world. The situation remained unchanged after the Roman annexation of Egypt in 30 BCE. The Great Library of Alexandria was a vast repository of ancient knowledge, ranging from 200,000 to 700,000 volumes — making it the equivalent to the internet for the ancient world. It was an ideal place to make Ptolemy’s world Map.

While Ptolemy was not directly involved in drawing Ptolemy’s world map, his work was crucial to the map’s creation. The map was inspired by Ptolemy’s book, the Geography, written around 150 CE. It consisted of eight books, compiling all the geographical knowledge of the second-century Romans. Interestingly, Ptolemy did not attempt to collect and go through all this geographical data. Instead, he based his work mainly on the maps and writings of the Roman explorer and cartographer Marinus of Tyre. Marinus invented nautical charts, however, his greatest legacy was the establishment of geographic latitude and longitude. In addition, he also divided the globe into 15 meridians and divided global latitude into seven zones.

Ptolemy adapted, and further refined Marinus’ measurements, creating the Ptolemaic projection of the Earth, which we still use today. Ptolemy’s world map extends 180 degrees West-East and 90 degrees South-North, encompassing one-quarter of the earth’s surface. Ptolemy used this projection to position all 8, 000 locations known to the Romans, from the Fortunate Islands (the Canary Islands) on the Prime Meridian, to China and Southeast Asia, on the eastern edge of the world. He also included an atlas in his work, consisting of a single large, less detailed world map and several separate and more detailed regional maps.

4. The Map Reflected the Roman View of the World

From East to West, Ptolemy’s world map stretches from the Canary Islands to Korea, showing the territories that lay far beyond the limits of the Roman Empire. Most of the map, however, is occupied by the Mediterranean Sea, planted firmly in the center. For the Romans, their Empire was the center of the civilized world. Yet, the imperial frontiers were only temporary. Already during the reign of Emperor Augustus, the poet Vergil wrote of the “imperium sine fine,” meaning the empire without an end, reflecting the idea that Rome’s destiny was to rule over the entire oikumene (inhabited world). Ptolemy’s world map reflects this ideology. After all, at the time of the map’s creation, the Empire was rapidly expanding, showing no signs of stopping.

The oversized Mediterranean basin is also the most detailed part of the map. Similarly, the eastern part of the Empire is detailed, as one of its most developed and urbanized areas. As we move to the fringes of the map, things get interesting. Scotland, the interior of Africa, and the regions under Chinese control, all beyond imperial reach, are stylized and less accurate. Everything beyond these areas is simply blank, described as the terra incognita (unknown land). Ptolemy knew the world did not stop there, but he lacked any information to fill in the blank space. The eastern parts of the map, although located far from Rome, are more detailed. This is especially India, a vital region for Roman trade with the East.

5. The Map Left a Lasting Legacy

Like many other works of antiquity, Ptolemy world’s map came to us in the form of a medieval copy. Although less detailed than the original, this map would remain the authority for thousand of years, as no other western cartographer could surpass these ancient authors. Columbus and Magellan used the map when embarking on their historical voyages, sparking the Age of Exploration. When someone finally overcame these limits, the works which followed improved on Ptolemy’s ideas rather than discarding them.

Thus Ptolemy’s world map remains the first modern world map, and the principles behind it were developed and reinforced, and they became the foundation for modern cartography and geography. Moreover, the map reflects the Roman sense of importance in the ancient world, and their attempts to overcome the limits of the Empire — a symbol of human curiosity that still draws us deeper into the terra incognita.