The Roman Empire and Ancient Africa: Trading with East Africa

After gaining control of the Mediterranean, Rome looked eastwards. In search of new markets, Roman merchant ships sailed to the ports of ancient Africa, bringing back precious exotic commodities. 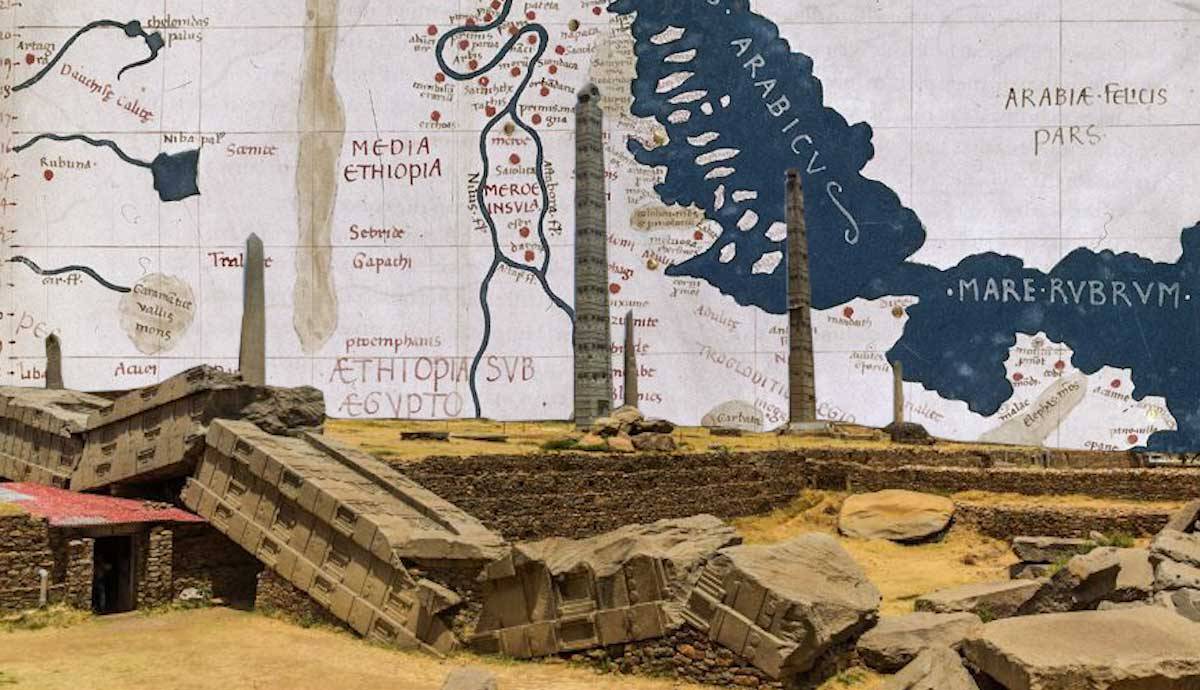 After becoming master of the Mediterranean, Rome looked further afield, to the untapped markets of ancient Africa and India. This lucrative long-distance trade with the East was facilitated by an unprecedented period of peace and prosperity — the Pax Romana. Every year, hundreds of ships laden with Mediterranean wares would sail to distant ports, bringing back exotic commodities. The Eastern African coast in particular, was an attractive destination for many Roman merchants.

Trade with ancient Africa gave Rome various precious exotic goods: ivory, myrrh, incense, tortoise shells, and slaves. As a result, the maritime trade between Rome and Africa would last for centuries, facilitating economic, cultural, and diplomatic relations. However, the weakening of the Roman Empire’s economy, followed by the Arab conquests in the mid-seventh century, resulted in the loss of Egypt, bringing Roman trade with Eastern Africa to its end.

Trade With Ancient Africa Before Rome

Ancient Africa traded with the Mediterranean kingdoms long before Roman rule. In the third millennium BCE, the pharaohs of ancient Egypt dispatched naval expeditions to the lands on the edge of the Red Sea, discovering the source of the precious incense required for religious rituals and mummification. Commercial sea lanes allowed the Egyptians to bypass their southern neighbors in Nubia and deal with the African kingdoms directly. The importance of the African trade route was strengthened by the construction of harbors on the Egyptian Red Sea coast, thus securing the shelter and logistics needed for merchant fleets. One such fleet, dispatched by Queen Hatshepsut, reached the distant and fabled land of Punt (present-day Somalia). The expedition was a great success, supplying Egypt with gold, ivory, myrrh, and frankincense.

Both the Persians and the Ptolemaic kings continued these African trade routes. The Ptolemies fortified and strengthened their existing harbors, and built several new ones. Besides their commercial role, the Red Sea ports acted as a transit station for African forest elephants, a key military unit of the Hellenistic empire. The two Ptolemaic seaports, Berenice Troglodytica (or Berenike) and Myos Hormos, would later play a key role in facilitating the Roman Empire’s Indian Ocean trade, providing the infrastructure and safe harbors needed for merchant fleets destined for Africa and India. However, the Ptolemaic rulers kept a tight monopoly over all maritime trade, imposing strict regulations and reserving the right to buy goods at artificially low prices. Unsurprisingly, this limited the scope of long-distance commercial ventures.

The arrival of the Romans changed the situation. After Octavian (soon to be the first Roman Emperor Augustus) annexed Ptolemaic Egypt in 30 BCE, this wealthy Mediterranean region became his personal property. The Romans also inherited their ancient commercial sea lanes. The old Ptolemaic trade restrictions were rescinded, which led to renewed interest in the passages to Africa and India.

Augustus took a personal interest in long-distance maritime trade. The Roman legions built new roads through the desert, facilitating overland traffic via caravans and encouraging merchants to sail toward the East. We do not know how many ships traveled to the ports of ancient Africa. However, considering Strabo’s statement that over 120 vessels traveled yearly to India, we can assume that the number of ships engaged in African trade was much higher — probably several hundred merchant vessels per year during the first and second century CE. After all, transporting goods by sea was much cheaper, faster (and safer) than land haulage.

Our primary source for Roman trade with Eastern Africa is the Periplus of the Erythraean Sea, written in 50 CE. This ancient navigation manual details the voyage along the Red Sea coastline, and beyond. It contains a travel itinerary — a list of main ports and anchorages, the distances between them, and potential trading opportunities. The voyage to Africa would start in Alexandria, a major trade hub on the Mediterranean coast and the second most important city in the Empire. Three weeks later, after traveling overland via desert roads or sailing through the Nile canal, the goods would reach the Red Sea ports of Berenike and Myos Hormos. Finally, after settling the administrative duties and loading the cargo, the ships would depart on their long voyage to Africa and India.

Along the Red Sea Coast

The ships sailing to East Africa left Egypt around August and September, two months after their counterparts had set sail for India, to catch the monsoon winds that would carry the fleet over the Ocean. The favorable winds allowed for (mostly) calm seas and facilitated travel along the Red Sea coast. After leaving Roman waters, the ships would encounter the first foreign port. Ptolemais Theron, or “Ptolemais of the Hunts,” was an ancient harbor built during the Ptolemaic period as one of the principal hunting stations for elephants. During the first and second centuries, the seaport was under the control of the wealthy Kingdom of Aksum, located roughly in present-day Ethiopia.

Five days south of Ptolemais, one would find Adulis, the principal emporium of Aksum. In exchange for gold and silver tableware from the Empire and Egyptian or Syrian fabric, Roman merchants bought precious goods from the hinterland of ancient Africa: ivory, rhinoceros horn, hippopotamus hides, tortoise shells, or slaves. The Romans also sold iron to the Aksumites, which surpassed local supplies of the ore in quantity and quality. For instance, Roman iron was used for spears crafted for elephant hunts. In addition, the coastal area in the vicinity of Adulis was a source of rare and precious volcanic glass, known as obsidian, a material the Romans believed to have magical properties.

The importance of Aksum and its goods to the Roman economy was reflected by the existence of a permanent Roman merchant colony on the small landmass linked to the mainland by a causeway — Diodorus island. However, due to frequent pirate raids, the Romans moved their operations to the nearby, easily defensible island of Oreine. The Roman settlement was occupied year-round and remained in operation for several centuries.

Lands of Incense and Spice

Leaving Adulis, the Roman ships sailed further down the eastern coast of ancient Africa. After passing through Bab-el-Mandeb, the ships left the Red Sea and entered the Indian Ocean. However, unlike their counterparts that sailed for India and had to brave the perils of the open seas, the merchant vessels engaged in African trade enjoyed the luxury of continuous sailing along the coast. Thus, they could make use of local ports for shelter and commerce. However, unlike the mighty Kingdom of Aksum, the Horn of Africa lacked cities and organized governments. Instead, Roman merchants here had to deal with natives organized in small, self-governing tribal communities, whom they considered “barbarians.”

The lack of centralized government meant these “far-side markets,” ranged from peaceful and friendly to unruly and dangerous, a challenge for the Romans. Yet, the profits outweighed the risks, so the Romans continued trading. After all, the markets of present-day Somalia were abundant in myrrh and frankincense, highly valued in Rome. For that very reason, the Romans referred to the Horn of Africa as the “Spice Promontory” or “Aromatic Lands.” In fact, the value of the unique goods found in the Horn region was so great that the Romans began organizing long-distance trading expeditions, which included larger and more specialized ships. However, the Romans were not the only interested party. Arab traders, too, sailed to the Horn of Africa, competing with the Roman merchants for business.

Further Down the Coast of East Africa

The first port of call was the small port town of Avalithes, which controlled access to the Red Sea, and was under the control of one of the “unruly” peoples. Here, the Romans could exchange their low-value goods, such as colorful glass baubles, Egyptian olives, grain, and tin, for high-quality myrrh, ivory, and tortoise shells. Even more important was Mosylon, the trade port located almost at the tip of the Horn of Africa. Mosylon was the source of cassia, a type of cinnamon so rare and highly prized by the Romans that it made up part of the imperial treasury. The cinnamon hub of ancient Africa also exported incense, used in religious rituals, gums, ivory, and tortoise shells.

Next, rounding the Horn and sailing south, the ships would reach Opone, a premier market for African slaves and exotic animals. Finally, after passing several smaller trading stations such as Sarapion, Nikon, and the island of Menuthias — nowadays known as Zanzibar — Roman merchants would reach “the very last port of trade on the coast of East Africa” — Rhapta (in modern-day Tanzania). At this point, the intrepid sailors were around 5000 kilometers (3100 miles) away from the southernmost border of the Roman Empire. Further south lay unknown territory, terra incognita unmapped by ancient cartographers.

The End of Roman Trade with Ancient Africa, and the New Beginnings

The unknown author of the Periplus explains that somewhere beyond Rhapta, the coast of the African continent curved west, leading to a place where the Indian Ocean meets the Atlantic. He was correct about the world oceans being connected, but no Roman ships ventured further south. The Romans, however, sent several expeditions south of the Sahara to explore the inland area of ancient Africa and find the mythical source of the Nile. It is possible that those expeditions, led by the elite Praetorians, were a prelude to a full-blown military campaign into the lands of sub-Saharan Africa, perhaps even aiming to take direct control of key trade ports. Yet, following the sudden death of Emperor Nero, the expeditions ceased. Thus, Rhapta remained the southernmost point of Africa known to the Romans.

In the following centuries, the increased external pressure on the imperial borders and civil wars shifted the emperors’ attention elsewhere. Yet, Roman trade with ancient Africa continued, albeit on a smaller scale. In the mid-sixth century, the Alexandrian monk and former merchant Cosmas Indicopleustes visited Eastern African ports before sailing to India, leaving a detailed account of the political situation in the Kingdom of Aksum. However, the loss of Egypt and much of the Eastern provinces in the seventh century deprived the Eastern Roman Empire of its vital Red Sea ports. The Arabs were now the masters of African trade.

Interestingly, during the early fifteenth century, another powerful empire — the Ming — tried to establish (nominal) control over East African lands and Indian Ocean trade, dispatching several naval expeditions under the admiral Zheng He. However, this strategy did not last for long. Several decades later, the Europeans reappeared on the scene after Portuguese explorers and merchants rounded the Cape of Good Hope, finally proving that the ancient author of the Periplus was right. During the Age of Discovery, East Africa, its vast natural resources, and its vital trade ports would become an essential element on the new, extremely lucrative overseas routes that linked the Atlantic with the Indian Ocean, and even further, the Pacific.