HomeArtistsBarkley Hendricks: The King of Cool

Barkley Hendricks: The King of Cool

Barkley Hendricks painted large-scale ultra-stylistic portraits that are the epitome of cool. We examine the life of this pioneering leader. 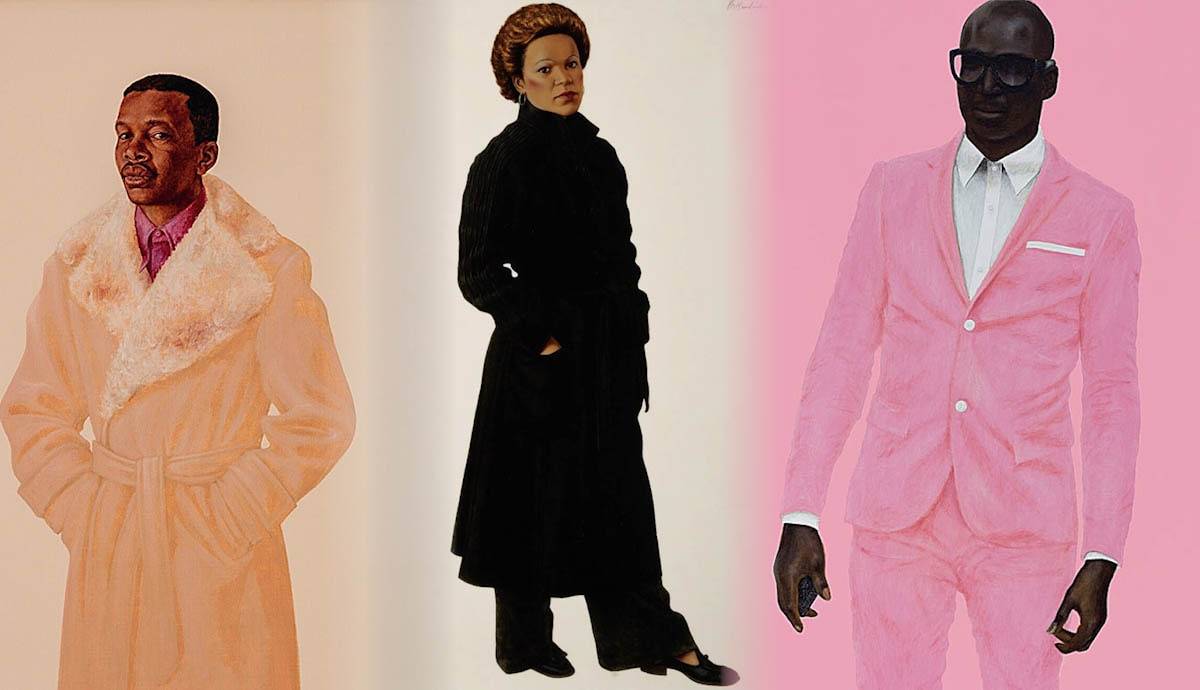 The ultra-stylish paintings by Barkley Hendricks could easily be mistaken for a fashion spread in a slick magazine. They are, in fact, large-scale paintings whose models are family members, students around campuses he taught at, and people he met on the streets. While Hendricks had been painting since the 1960s, it wasn’t until the 2000s that his work received its due. Let’s take a look at the contemporary painter whose portraits have an uber-cool vibe!

Who was Barkley Hendricks?

Barkley Hendricks was an African American artist born in Philadelphia in 1945. He was a student of the Pennsylvania Academy of Fine Arts before graduating from the Yale School of Art where he received his BFA and MFA. He grew up in the city of Philadelphia and even taught arts and crafts at the Philadelphia Department of Recreation from 1967 to 1970.

As a student, Hendricks traveled to Europe and saw the works of European masters. Despite enjoying the works of artists including Rembrandt, Caravaggio, and Jan van Eyck, the lack of Black representation on these walls was a bothersome detail. While Barkley Hendricks is most known for his large-scale portraits, his love of basketball (he was a 76ers fan) saw him painting works related to this sport. By the time he passed away in 2017, Hendricks’s body of work had inspired a range of Black artists including Kehinde Wiley and Mickalene Thomas.

Barkley Hendricks’s iconic portraits were preceded by experiments in landscape and still life. He had experimented with photography since he was an adolescent before making the shift to painting, and at one point studied under renowned photographer and photojournalist Walker Evans. Even after shifting to painting, Hendricks still incorporated photography into his paintings, and often had a camera strapped to him when he was out and about to capture any future inspiration. Before immortalizing them on canvas, Hendricks photographed his subjects.

Hendricks never sketched out his paintings before working on them, as other painters were known to do. Instead, the artist worked straight from the photograph, painting his subjects in oils and acrylics. Trever Schoonmaker, director of the Nasher Museum of Art at Duke University, said, “The portraits he is best known for usually started with a photograph, which he would take liberties from.” (Arthur Lubow, 2021) Hendricks’s portrait painting came to a halt between 1984 and 2002, and he began to paint landscapes, play jazz music and photograph jazz musicians.

Barkley Henricks was known for his striking portraits of African Americans living in urban areas. Hendricks painted the elaborate, stylish outfit choices African Americans were wearing on the streets in the 1960s and 1970s. He has shied away from painting Black people in crises or protest, opting to paint them during their daily routine. In his trademark photorealistic style, Hendricks’s subjects emitted a cool vibe and a strong sense of self-awareness through style, attitude, and expression.

The Birth of Cool

Hendricks began portrait paintings in the mid-1960s. He plucked subjects for his paintings from family, friends, and people from the neighborhood. Some were students he had encountered from his days as a faculty member at Connecticut College. With his camera acting as a sketchpad, Hendricks captured photographs of anyone that caught his eye.

Some of Hendricks’s subjects were even thought to be fictional, imaginary characters – in Latin From Manhattan…The Bronx Actually, the subject, clad from head to toe in black, is known only as “Silky.” So, she might be a character from Hendricks’s imagination. This little detail didn’t deter a couple from Michigan from acquiring Latin From Manhattan for a price estimated between $700,000m and $1 million. Meanwhile, Sotheby’s continues to search for the identity of “Silky.”

Hendricks provided a space for Black subjects that wasn’t clothed in political strife. As the artist said, the subjects in his paintings were people from his life, and the only hint to politics was due to the culture that consumed them. At the time, no other contemporary painter had been working like this. He confronted audiences in the Whitney Museum’s 1971 exhibition titled Contemporary Black Artists in America, where his nude self-portrait Brown Sugar Vine (1970) confronted contemporary audiences as he claimed back ownership of black male sexuality. Similarly in Brilliantly Endowed (Self Portrait) (1977), sardonically titled, Hendricks paints himself nude except for a hat and a pair of socks.

Barkley Hendricks’s subjects had striking style choices. The contemporary painter gravitated towards portraiture when his contemporaries delved into minimalism and abstract painting. His portraits were life-sized and dominated the viewer. While there are countless designers inspired by artists such as Andy Warhol and Gustav Klimt, Hendricks was inspired by life on the streets. What could often pique his attention was the smallest of details on an outfit rather than the entire thing. He kept an eye out for cool hairstyles, interesting shoes and t-shirts. He couldn’t help but paint these details into his work because this is what was around him. Hendricks’s portraits often had a monochromatic background. In North Philly Niggah (William Corbett), Barkley Hendricks paints William Corbett looking cool and stylish in a peach coat with a striking magenta shirt peeking out, striking against a monochromatic backdrop.

In Steve, Hendricks chooses a subject he met on the street. The young man dressed in a white trench coat strikes a strong pose against a white monochromatic background. A toothpick sits between his lips as he stands in a nonchalant pose. The reflection in his glasses reveals another portrait of the contemporary painter standing before Gothic windows.

Lawdy Mama has a similar monochromatic background, one that dazzles in gold leaf. Rather than being a depiction of a political figure like audiences believed (suggesting the figure was Kathleen Cleaver), Hendricks painted his cousin. Critics overstepped boundaries here by suggesting they knew something more than the artist about this work and that irritated Hendricks. The painting of his cousin is projected on large scale as a saintly figure that evokes Byzantine art. Her afro acts as a halo. She’s immortalized and, in a sense, appears regal. Hendricks’s love for soul and jazz music also helped title the artwork, which was named after a Buddy Moss song.

This isn’t the only time the contemporary painter borrowed song tracks for his artworks. There is What’s Going On, named after the Marvin Gaye album. Hendricks delighted in playing music as well as being a spectator. He photographed jazz legends Miles Davis and Dexter Gordon. In 2002, after a two-decade hiatus from painting portraits, Hendricks painted the portrait of Nigerian musician Fela Kuti in Fela: Amen, Amen, Amen, Amen. Like Lawdy Mama, Kuti’s portrait is a nod towards sainthood, though more obviously so thanks to the halo. Kuti is also grabbing his crotch, apparently despite the halo. What’s more, Hendrick’s placed the portrait as an altarpiece with 27 pairs of female shoes at its feet – a nod to the women Kuti had been involved with. This is probably due to the contemporary painter’s sense of humor.

Photo Bloke has a similar costume and backdrop color pairing as Hendricks’s Steve painting. It is known that Hendricks takes liberties with his subjects and he did so with the stylish Londoner he portrayed in Photo Bloke. The man hadn’t exactly worn that shade of pink as is represented in Photo Bloke. Hendricks dabbled with acrylic pink and ultraviolet to achieve this powerful color.

The Late Appreciation of Barkley Hendricks

While Barkley Hendricks had been making art through various mediums since the 1960s, it wasn’t until 2008 that he was finally appreciated on a grander scale. In his retrospective Barkley L. Hendricks: Birth of Cool, a fan of Hendricks, Trevor Schoonmaker organized the show which went on to travel around the country. The retrospective showed 50 paintings by Hendricks, the earliest of which dated back to 1964. Today, he is considered a major influence among contemporary painters. It is interesting to know that Hendricks also made a sculpture inspired by the US president Barack Obama.

Before his crowd-pleasing retrospective, Hendricks taught at universities, enjoyed playing jazz, and painted landscapes from annual trips to Jamaica. He made an array of works on paper between 1974 and 1984, which are multimedia compositions far removed from his portraits or basketball still life paintings. Throughout his career Hendricks continued photographing his surroundings, from basketball hoops and jazz musicians to the food in his pantry, and these subjects all made their way into his art. His motivating factor for painting and making art always came down to enjoyment and pleasure: is there a more inspiring way to live than to do what you enjoy doing the most?

Van Eyck: An Optical Revolution is a “Once in a Lifetime” Exhibition