HomeStoriesThe Battle of Jutland: A Clash of Dreadnoughts

The Battle of Jutland: A Clash of Dreadnoughts

The Battle of Jutland was one of the largest naval battles in history and while inconclusive, had a direct hand in the end of World War I. 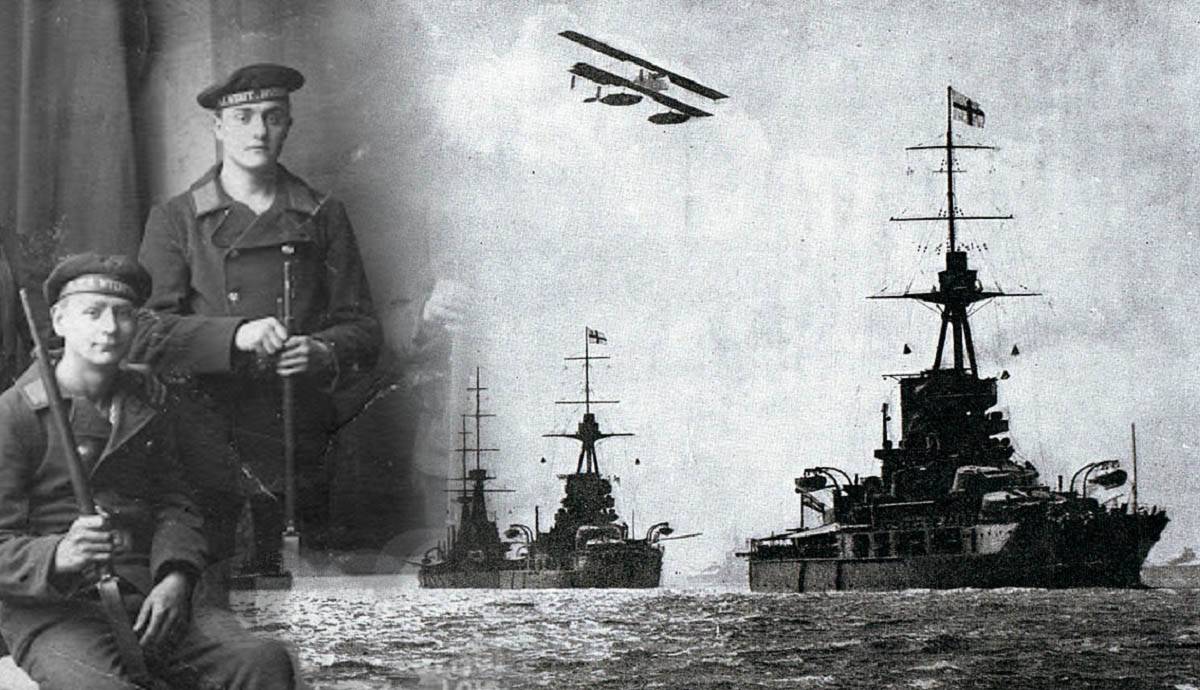 World War I was a conflict on a scale that was never seen before across the globe. On land, on the sea, and for the first time, in the air, battles were waged between the Entente Alliance of Russia, France, and Britain against the Central Powers of Germany, Austria-Hungary, the Ottoman Empires, and Bulgaria. Preceding the war, the largest naval race in industrial history raged on with Germany’s Kaiser Wilhelm II wishing to emulate and challenge the uncontested dominance that England held over the high seas. This arms race would result in only a single major naval battle during the entirety of the war between these behemoth fleets of dreadnoughts: the Battle of Jutland in the summer of 1916.

The Build-up to the Battle of Jutland

In the years leading up to World War I, Jutland saw perhaps the greatest naval arms race of the modern era. With the coronation of Kaiser Wilhelm II, in 1890, there had been a desire by the German monarch to form a truly global Empire, the likes of which were possessed by many other world powers at the time, namely France and England. Two important hallmarks of global powers at the time were overseas colonies and, perhaps more importantly, a navy capable of enforcing those claims.

While Germany was comparatively late to the game, they nevertheless possessed an immensely strong industrial and economic base from which to start. This potential was greatly helped along by the fact that, politically, Germany’s democracy was much more pliable to the whims of the Kaiser as head of state compared to other democratic European nations. This meant that Germany had both the means and the political drive to rapidly industrialize and catch up to the rest of the world’s powers.

The rapid expansion of the German navy was met with some alarm in England and, by 1906, intensified in its efforts with the revolutionary introduction of the HMS Dreadnought, an ultra-modern ship that made all vessels before it obsolete almost overnight. This new ship possessed the fighting capability of two to three battleships built even as little as a year before it. With this new development, naval construction in Germany exploded as they raced to build their own Dreadnought-style ships, a move which likewise forced England to speed up its own construction to match. By the start of World War I in 1914, Britain had built twenty new dreadnoughts and nine slightly smaller, faster battlecruisers. Germany, meanwhile, had itself built fifteen dreadnoughts along with seven battlecruisers, on top of countless more ships of smaller sizes.

World War I at Sea

With the outbreak of World War I in 1914 England still maintained its numerical superiority on the high seas and along with its geography, allowed them to rather easily blockade the entirety of Germany from maritime trade through the North Sea. While the Royal navy was certainly larger, England still had very real cause to be afraid of German naval capabilities especially as World War I began to scale up with the German navy investing heavily in commerce raiding and submarine (U-boat) production.

Prior to the war, the German Admiralty formed the Hochseeflotte, or the High Seas Fleet, understanding that due to the UK’s global empire, their navy would be forced to disperse across the globe in order to reinforce its far-flung holdings in the event of war. However, with the outbreak of war, the Royal Navy saw that the only realistic threat from the seas was from that of Germany itself and so formed the entirety of its blue-water navy into the Grand Fleet. This immense force of roughly 160 ships, including 32 dreadnought and even newer super-dreadnoughts, was concentrated in the northeast of Scotland, closing off any entry or exit between the UK and Norway.

Leading up to the Battle of Jutland there would be relatively few actual naval encounters. With the blockade in place, England had little reason to actively seek out the German Navy and feared German submarines and minefields that lay in German waters. Meanwhile, while Germany wished to break the blockade, the concentration of the numerically superior Grand Fleet meant that there was little hope of a major victory without somehow luring the ever-wary English ships into a submarine ambush.  The battle itself could be seen as an immense game of cat and mouse, with both sides feeling that the only way to achieve victory over the other was to catch them out of place. While the High Seas Fleet did set out a number of times in an attempt to lure British ships into a trap, the Grand fleet never fully took the bait until the late spring of 1916.

A Clash of Dreadnoughts

With neither side wishing to commit the entirety of its forces, it looked as though this game of cat and mouse would continue on indefinitely. However, things would change off of Denmark’s Jutland peninsula, where the Battle of Jutland happened, in late May of 1916. The German navy had been in the process of once again trying to lure out part of the Grand Fleet in order to whittle down their numbers in preparation for a final climactic showdown once some parity in numbers had been achieved. As such, a number of German battlecruisers were sent out in advance of the High seas fleet in order to lure a portion of the English fleet into a trap set out by a screen of German submarines, before engaging.

Unknown to the Germans, the English had intercepted communications and knew about the submarine ambush, though not the fleet itself. Thinking this was an opportunity to turn the tides on the would-be attackers the British admiralty set sail with the entirety of the Grand Fleet, 151 ships in total to smash the German battlecruiser ambush. Ironically both fleets were aware of the opposing side’s battlecruiser scout groups, but not the other fleet itself, meaning that both were essentially sailing into an ambush.

The Battle of Jutland itself took place on May 31st when British battlecruisers easily bypassed the submarine screen and engaged the German battlecruiser line well sooner than the Germans had been expecting them to arrive. Despite being caught by surprise the German battlecruisers performed very well and lured the British ships to the south-east where the High Seas fleet took the English ships by complete surprise. By the time the British ships turned away, they had lost two battlecruisers, leaving the High Seas Fleet undamaged and giving chase. Things would turn around once again when sailing out of the smoke caused by their guns, the High Seas Fleet would find itself face to face with the entirety of the British Grand Fleet, who they had no idea were even at sea. In the confusion, the English ships had predicted their opponents’ movements and “crossed their T.”

Finding themselves heavily outgunned the German fleet managed to evade directly combating the English through a number of well-practiced maneuvers, smoke-screens, torpedo volleys, and at times, dangerous delaying actions by the remaining battlecruisers. As night fell it became even more difficult for the British to contain the German fleet and in the confusion of darkness, the High Seas Fleet was able to slip away through the rear of the English screen, at times coming into contact with British ships at distances well under a kilometer. As dawn rose the British could see that the Germans had escaped. Overall, a total of twenty-five ships on both sides had been sunk, along with eight and a half thousand dead.

Battle of Jutland and the End of World War I

Before the last wreck had even settled on the ocean floor, propaganda for both sides was in full swing, claiming a victory of this monumental clash of dreadnoughts. The British Navy had punished the High Seas Fleet for daring to leave their ports and had forced them back into the safety of the coast. Meanwhile, Germany had gone up against the might of the largest fleet in the world and not only survived but had caused over twice as many casualties and sunk almost twice as many tons worth of ships, including three capital ships, while only having lost two themselves (one of which was an obsolete pre-dreadnought battleship). However, while both nations publicly announced a victory, the fact of the matter was that nobody was happy with the end result of the Battle of Jutland.

The British had been hoping for a decisive victory in the Battle of Jutland, their ambush and later maneuvering having come close to decimating the High Seas Fleet on numerous occasions. Furthermore, the loss of three battlecruisers during the Battle of Jutland seriously challenged British ship design itself, forcing the admiralty to entirely reconsider its philosophy on fleet composition. Germans meanwhile now came to the painful reality that despite the Battle of Jutland arguably being a best-case scenario for major fleet action, there was no chance of victory against the English Navy. While their crews and officers had performed well a large part of their success had come down to luck and, even then, they could not sustain the same rate of losses that they had during the Battle of Jutland.

The German navy knew beyond a shadow of a doubt they could not beat the Grand Fleet and kept their actions to the Baltic until the end of the war. Most of the crews of the German High Seas Fleet would remain stuck in port for the next two years with little to do on lowered rations. This would change in late 1918, when, seeing that the war was going poorly, the Imperial Navy Command would order the High Seas Fleet out into the North Sea, intending to engage in a final, defiant showdown. Simply put, this was suicide, and the sailors knew it. After two years of neglect and being given this final, suicidal order countless sailors in multiple German ports mutinied.

Within days numerous port cities were under the control of the mutineers, and their calls for personal freedoms and the end of censorship among other things resounded throughout all of Germany, leading to the German Revolution of 1918-1919. This revolution would result in the removal of the Kaiser and his government, being perhaps one of the single largest political pushes by Germany in order to bring an end to World War I, which indeed, would end a mere week after the mutineers had taken control of German ports. All this was brought about by a movement that began over the thundering cannons off the coast of Jutland.

German Museums Research The Origins Of Their Chinese Art Collections

Titanic Ship Sinking: Everything You Need to Know