HomeStoriesTitanic Ship Sinking: Everything You Need to Know

Titanic Ship Sinking: Everything You Need to Know

The Titanic is perhaps the best-known maritime disaster in history. There are, however, some less-known stories from the tragedy. 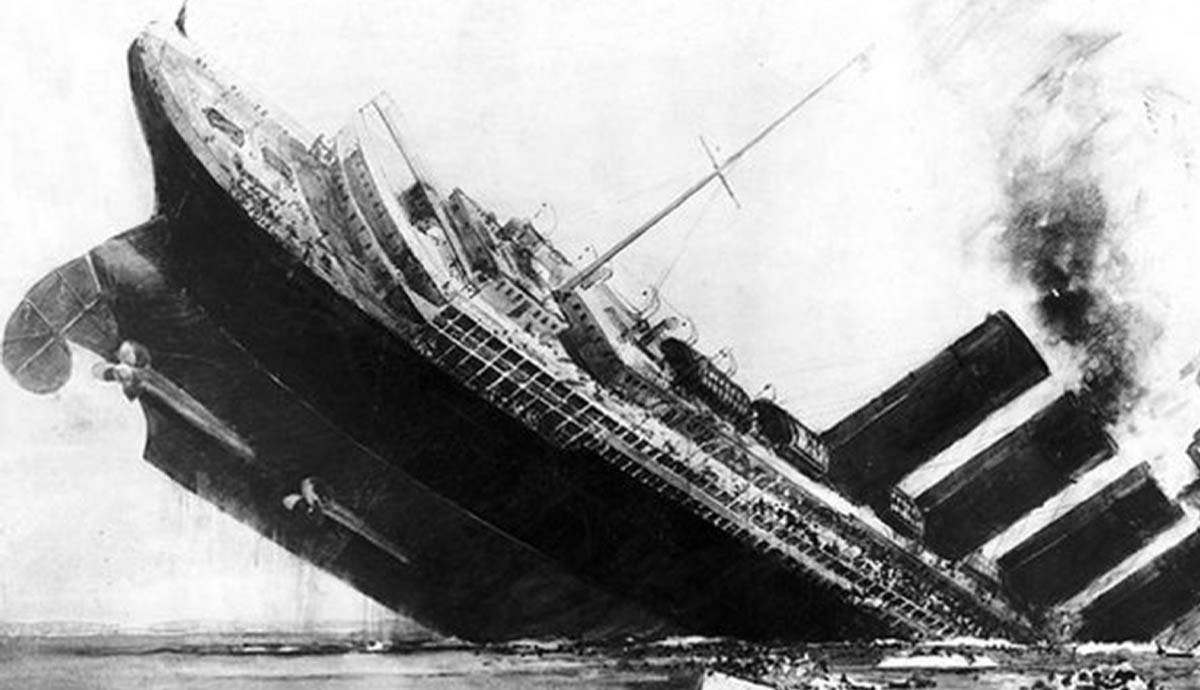 There are very few people who have not at least heard the story of the Titanic. It is a classic historical account of man’s hubris in making an unsinkable ship and the tragic folly in being proven so very wrong by nature in the form of an iceberg on its maiden voyage. The story of this ship is perhaps most widely recognized thanks in no small part to James Cameron’s 1997 film of the same name, remaining, for many years, the highest-grossing movie in history. Those that have seen the film might be surprised at the immense amount of historical accuracy that Cameron obsessively worked to include in the film, even including many aspects of the shipwreck that viewers would have no idea existed.

In the early 1900s, ocean travel was the primary mode of long-distance transportation and with the industrial revolution in the west, untold numbers of immigrants, cargo and passengers were being ferried in cross-continental voyages overseas. This was considered to be the height of the ocean liner, and ever-larger ships were being built not only to satisfy demand but as a show of industrial power, wealth, and ambition.

In 1911, the first of three monstrous ocean liners of the aptly named Olympic-class was completed, taking the title of the largest ship ever made. Because the Titanic itself was the second ship completed, certain changes were made in the final stages of construction based on lessons learned from its older twin, the Olympic, which meant that upon her completion and despite being a near mirror of her sister, the Titanic now held the title of the world’s largest ship afloat.

At the time of their construction, it was believed that increasing technology and ever-improving designs meant that these ships were entirely unsinkable. This claim was put to the test and seemingly reinforced on the 20th of September 1911, when the Olympic was rammed by the Royal Navy Cruiser HMS Hawke, whose prow had been designed with the specific intent to sink ships by ramming. Despite the collision, the Olympic’s advanced damage control and design prevented any major disaster.

The Shipwreck of the “Unsinkable Ship”

Of course, as history would infamously remember, the reputation of these ships as unsinkable would serve only as an ironic footnote of man’s supposed mastery over nature. Departing from Southampton for Cherbourg in France and finally New York in America on the 10th of April, 1912, Titanic would never make it to its final destination. In the final minutes of April 14th Titanic would strike a large iceberg in the mid-Atlantic and sink hours later on April 15th with the loss of up to 1,635 passengers and crew, making it the most deadly shipwreck at the time. It still remains one of the most costly sinkings in recorded history.

Famously, it was known that at the time, the Titanic did not have enough lifeboats for the entirety of its capacity, with only twenty lifeboats in total when its design allowed for a maximum of sixty-four. As such, it could only accommodate roughly 1,178 people in all, though of the estimated 2,224 passengers and crew on its maiden voyage, only 710 ever made it onto the boats. While this might at first seem like a complete disregard for safety, there was actually some reasoning behind this lack of lifeboats. During this era, it was believed that ocean traffic was so high that any maritime disaster or shipwreck would have ships nearby for a quick rescue. This, coupled with the belief that newer ships were either unsinkable or built well enough to sink very slowly, meant that lifeboats were intended to ferry passengers and crew off of a ship to a rescue ship, rather than prevent drowning and freezing.

Shortly after midnight, the order to prepare and load the lifeboats was given by Captain Edward Smith. Immediately a number of logistical difficulties came about, slowing down and perhaps confusing the crew’s efforts. Firstly was that because of flooding in the bow of the ship the front-most boiler of the Titanic was venting large amounts of steam from its forward funnel, creating a near-deafening hiss that made communication difficult. Secondly was the actual difficulty in convincing passengers that there was an emergency at all thanks to the very successful propaganda of the alleged Unsinkable ship. Even after being woken and told to assemble at the lifeboats, many passengers refused to believe that anything was wrong, or that they had reasons to wait out in the cold rather than stay inside.

Furthermore many believed that they were in fact safer on the ship itself, rather than in the lifeboats with many passengers outright refusing to board the boats. Worse still was that very little of the Titanic’s crew, including the officers, were properly trained on the lifeboats. This meant that even with as few lifeboats as there were, not all were able to launch in time and those that did were often well under capacity, sometimes as low as one-third their max load.

Once passengers finally started to assemble the famous order was given that women and children should be evacuated. This was overseen by two officers; Second Officer Charles Lightoller on the port side, and First Officer William Murdoch on the starboard. Due to the deafening noise, communication was difficult and this single order was not elaborated on and both men would interpret the Captain’s instructions differently. As lifeboats were intended to ferry passengers, Lightoller believed that the lifeboats should be filled with only women and children and sent away regardless of how full they were, before returning later for the men.

Murdoch, meanwhile, thought that once the women and children had boarded, any spare seats would be given to any men nearby. As a result, besides the crew manning the boats, only a single man was permitted entry onto the life rafts on the port side of the ship and many left with as low as one-third their capacity. This meant that if you were a man of any class, your survival almost entirely depended on which side of the ship you were on.

Stories From the Deck

Due in part to the large number of survivors, who were often-times interspersed with those who tragically froze in the Atlantic, there exist many famous stories surrounding the actual shipwreck itself. Many of these stories have been sensationalized and even appear in the 1997 film adaption, though most viewers would be excused for not knowing which were fact and which fiction. Perhaps one of the most touching examples that made its way into the film is the story of Isidor and Ida Straus. An older couple in first class, while the boats were being filled, Isidor, aged 67, was offered a seat, which he firmly declined, seeing that other women and children were waiting to board. When others insisted his wife, Ida, board without him she replied with the famous quote: “I will not be separated from my husband. As we have lived, so will we die – together.” She then gave her fur coat to her maid and left with her husband with both of them last seen walking the decks, arm in arm.

This portrayal of loving devotion was depicted in the film, with the elderly couple holding one another in bed as water rushed into their room. The music and the accompanying tale of the musicians was likewise one depicted in the film, though eye-witness accounts of what exact song was being played as the ship went down to divulge somewhat. While some survivors stated that waltz music was being played until the end, others insist that it was instead the hymn “Nearer, My God, to Thee” which was ultimately picked for the film.

A story in a slightly lighter note is that of Charles Joughin, the chief baker aboard the Titanic, and his astonishing tale of survival. His first order of business was to direct the crew under him to start ferrying provisions of bread to each of the lifeboats before he, himself, started assisting with the evacuation of women and children. When faced with the issue of passengers refusing to board the boats due to the mistaken belief that they were safer on the ship, Charles’ solution was simple: chase them down as they departed, pick them up and physically throw them into the lifeboats, like it or not.

Despite being designated to man one of the lifeboats he decided that the crew already present would suffice and sent them off without him, returning below decks to quote “[have] a drop of liqueur.” Once he returned to the deck, he would find all of the boats that could depart had already done so. He began to throw dozens of wooden deck-chairs into the water for survivors to use as flotation devices.

At this point, he stopped for a brief drink of water, only to hear the ship cracking in half as it began its iconic and fateful final plunge. As the rear of the ship turned into the air Charles would climb up along the railing to the very peak of the Titanic’s stern. This is actually shown in the film, as Jack and Rose cling to the railing waiting for the ship to sink; they look over to see Charles there with them. As the vessel plunged under the water Charles stood up and simply stepped off of the boat as it went under, miraculously keeping his head above water the entire time, which is likewise portrayed in the film. At this point, Charles found himself in the open ocean, treading water.

In the freezing conditions hypothermia normally began to set in at fifteen minutes and death was all but assured within thirty minutes of entering the water. Despite this, Charles would miraculously remain in the ocean for two hours, barely feeling the cold thanks to the liquor, until he finally spotted one of the overturned lifeboats where one of the survivors there held him halfway out of the water until he could finally be removed entirely sometime later. Shockingly, despite the immensely long time he had spent in the water, he emerged with little more than superficially swollen feet.

The Hidden Details in the Movie Titanic

While there are many more stories to be told about the Titanic and the best-known shipwreck, it is rather impressive that the director James Cameron went to such lengths to include these otherwise obscure stories in the film, without ever drawing attention to them or explaining it to those who would not already know things about these stories. It certainly shines a light on his artistic process and allows a greater appreciation when re-watching the film. Perhaps next time, as you watch this movie about the tragic shipwreck, you might pick out a few of the characters and stories listed above, as many do appear in the film.