HomeStoriesWhat is the Graveyard of the Pacific?

The Graveyard of the Pacific is a stretch of coast that has claimed countless lives and led to numerous shipwrecks in the past two centuries of maritime traffic. 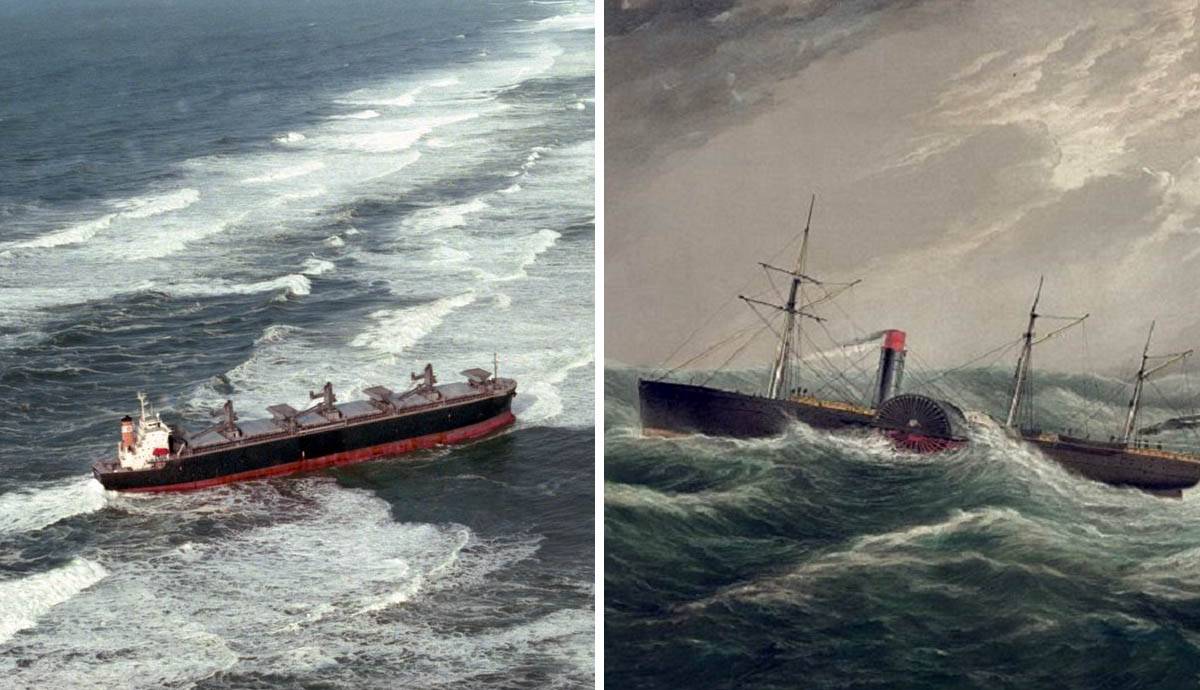 Stretching from the mouth of the Columbia River on the US coast of Oregon all the way up to the northern tip of Vancouver Island in Canada, the grimly named Graveyard of the Pacific has proved a constantly challenging stretch of coast since it was first charted centuries ago. A mix of unpredictable weather, difficult to navigate coastline often shrouded in mist and currents caused by the Columbia River and Strait of Juan de Fuca have claimed upwards of two thousand shipwrecks and over seven hundred lives in the past two centuries. While modern technology has helped to mitigate the number of losses on this stretch of coast, the name lives on into the modern era.

The New Carissa, Shipwreck on the Oregon Coast

While we often believe that the advancement of technology is enough to save us from the dangers of mother nature, there exist many reminders that we can never be entirely safe. The New Carissa was a bulk freighter constructed in Japan and sat at a length of 195 meters long and specialized in transporting wood chips for paper pulp mills, both of which cover North America’s western coastline. In February of 1999, intending to pick up a load of wood chips, the ship arrived on the Oregon coast, during a time of year where extreme weather would cause many shipwrecks along the coast.

Informed by local pilots that the weather was too poor to allow the ship to dock, the Carissa would be required to drop anchor off of the coast to wait out the worst of the storm. The waiting crew, however, failed to notice that they were beginning to drift. A combination of insufficient anchorage and a very high amount of wind gradually pushed the ship closer and closer to land and, by the time the ship’s unintended movement was noticed, it was too late. The vessel would find itself run aground on a beach some miles north of the bay. Fortunately, none of the twenty-three crew members aboard were harmed. However, the ship itself became stuck. Due to some significant damage, it then began leaking fuel out into the water, causing a major ecological disaster.

Despite numerous attempts, constant bad weather would keep the ship stuck, compromising and flooding various sections including the engine room, meaning that the ship was now truly little more than a shipwreck. There was even debate about removing the wreck, as many saw shipwrecks to be an essential part of Oregon culture and could be a potential tourist attraction. Ultimately it would take nine years before the last of the wreck was finally removed, proving that even in the modern-day the Graveyard of the Pacific continues to claim the unaware and complacent.

The Graveyard of the Pacific claims SS Pacific and Orpheus

In early November of 1875, two ships collided off the coast of Washington state and Vancouver Island, resulting in the deaths of somewhere in the region of two hundred and seventy-five people. The details surrounding the collision and subsequent sinking remain to this day a mystery, due to all but two of the Pacific’s passengers and crew perishing from the crash, meaning the only accounts come from either members of the Orpheus‘ crew or the two survivors from the Pacific.

Constructed in 1850, the Pacific was a sidewheel steamer ship that had served a long career on both sides of North and Central America, serving to move people, goods, and mail. By the time it had entered service in the Pacific north-west it was used largely to support traffic for the latest Canadian gold rush in the far north of British Columbia. With rates kept very low and its age starting to catch up with it, there were numerous beliefs that the ship was well beyond its prime, and likely badly in need of maintenance if not outright retiring. On a return trip from Victoria to San Francisco, the Pacific had left the strait of Juan de Fuca into the open ocean and turned south, where it would encounter the Orpheus, traveling north in light rain at 10 pm.

The Orpheus, well aware of how dangerous the waters were around the strait, saw the lights of the Pacific and believed that it was headed directly towards a nearby lighthouse and so turned hard to port, putting it instead on the path of the Pacific. As the ships struck one another, they would quickly lose sight of each other. With the Orpheus suffering next to no damage, they believed the same was true for whoever they had struck. In truth, however, and for reasons still unknown, the old steamer was entirely demolished.

Complete pandemonium took place aboard the Pacific, with the ship already keeling heavily over to the port side. The vessel had already been listing portside earlier in the voyage. To fix this, the crew began filling the entirety of their starboard lifeboats with water in an attempt to counterbalance the list. Needless to say, this rendered half of the lifeboats immediately useless. Those on the port side that did manage to make it into the water inexplicably capsized or took on water immediately. To further add to the terrible luck, soon after listing, the ship began to break up, far faster than any would expect, causing the funnel to collapse, crushing yet another lifeboat.

Only two people survived the shipwreck, making it the most deadly sinking that the Graveyard of the Pacific had caused to date. Furthermore, while none of the members of the Orpheus‘ crew had perished, the ship would continue on north, missing its turn entirely into the strait. Upon seeing the Cape Beale lighthouse on Vancouver Island, the crew believed they had reached the turn only to collide directly with the island, shipwrecking themselves and allowing the Graveyard of the Pacific to claim two more ships.

Shipwreck of the SS Valencia

The Valencia was a passenger steamer built in 1882 and would become perhaps the most famous shipwreck claimed by the Graveyard of the Pacific, along with being one of the more costly as well. Much like the Pacific before it, the Valencia began its career on the east coast, sailing between New York and Latin America, specifically Venezuela. It would serve this route for a number of years, even becoming one of the flash-points for the American-Spanish war in 1897, when it was fired upon by a Spanish cruiser off the coast of Cuba, which was one of the points of rising tension in the lead up to war which would break out the following year.

By the start of 1898, Valencia had, similarly to the Pacific once again, found itself sold and transferred to the west coast. There it would initially be chartered by the US government as a troop transport with the outbreak of war with Spain, where it was used to transport soldiers between the continental United States and the Philippines. Once returned to service on the west coast it quickly became apparent the ship was not well suited for its new job. The design of the ship was not intended for harsher, northern winters, as the wheelhouse was located rather far back and low down to the deck, reducing visibility in rough weather.

With a design intended for the east coast and calmer waters and its age catching up with it, the Valencia was often considered an undesirable ship to sail on. Eventually, it would find itself in a semi-retired state, especially during the unsuited winter months, where it was only used when no other ships were available. As fate would have it, in January of 1906 this is exactly what would happen, with Valencia setting out from San Francisco for Seattle with a hundred and sixty-four people on board.

In a series of events that, by now, should sound almost disturbingly routine in the Graveyard of the Pacific, the ship found itself reaching the Strait of Juan de Fuca in high winds and low visibility, the ship missed the turn entirely. Because of the bad, overcast weather navigation was all but impossible, and, having failed to make their turn, the ship would crash into the rocky shores of Vancouver Island, eighteen kilometers from the Cape Beale lighthouse which the Orpheus had mistakenly shipwrecked near some thirty-one years ago.

Trapped on the rocky shallows of Vancouver island, all but one of the Valencia’s lifeboats were immediately lowered and lost to the rough seas along with those inside. Only nine men managed to make it to shore, where they immediately set out on the telegraph trail towards the lighthouse in hopes of finding help. Those remaining on the ship, mostly women and children, were forced to attempt to find shelter on the very exposed top of the stranded vessel.

By the time rescue managed to arrive the shipwreck was in poor condition and likely would not last much longer. Survivors who had escaped the ship already recalled women clinging to the deck and singing the hymn Nearer, My God, to Thee, in a chilling premonition of what many survivors would later recall of the Titanic’s sinking. Due to the shallow and dangerous water, none of the rescue ships sent from Victoria could approach the stricken vessel. With only two serviceable and smaller rafts aboard the ship itself, only a few people were able to depart from the vessel once the ships had arrived, with most remaining behind expecting rescue to follow soon after.

Tragically there would be no rescue, as soon after the funnel of the Valencia would collapse and the ship started to break up. The entirety of those remaining on board were thrown into the sea as the rescuers helplessly watched on. None who went into the rough, frigid waters would survive. While an exact death toll of the shipwreck was somewhere between one hundred and seventeen to one hundred and eighty-one. While we are still unsure of how many died, only thirty-seven men had survived the sinking, having been the ones who attempted to leave in search of help, while not a single woman or child survived the shipwreck.

The Franklin Expedition: Death in the Arctic