Through the ages, dogs have functioned as the symbol of one’s fidelity, or lack of it. This can be seen in the works of art depicting these devotional relationships. 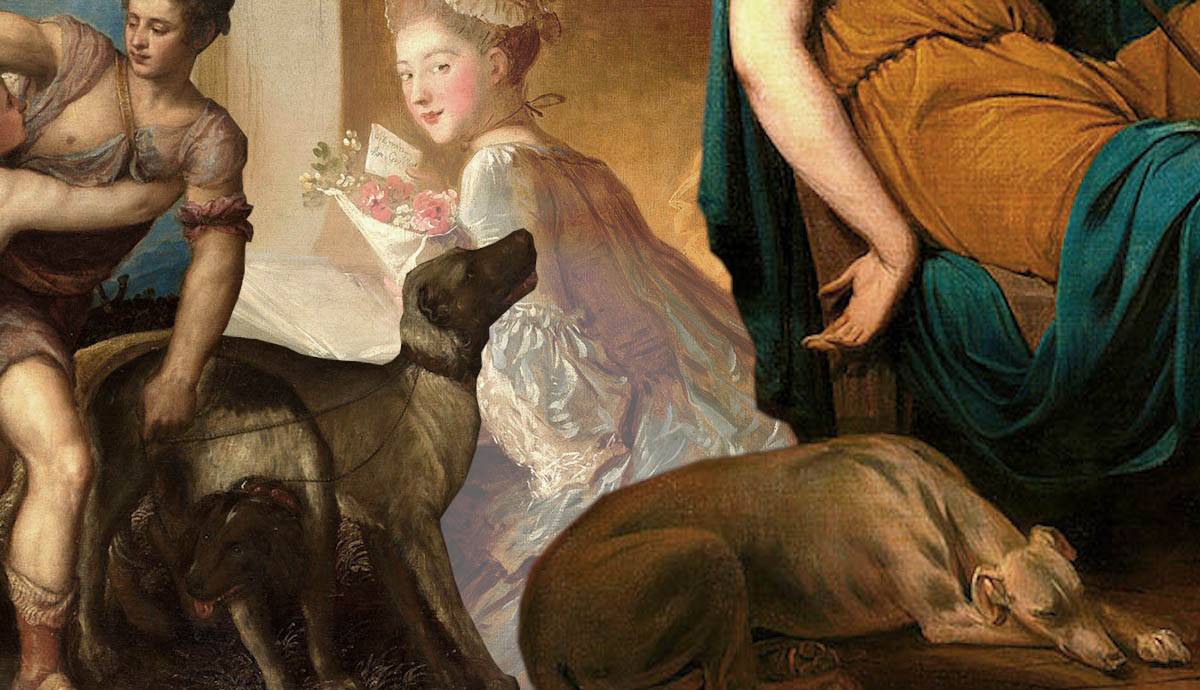 Dogs have been depicted in art for thousands of years. They have been shown as man’s best friend, or as guardians of worlds, and as symbols of pestilence. However, they are more than that. Dogs are the symbol of fidelity, in its many forms. Dogs are found in a plethora of paintings depicting devotional relationships. They are the subject to look for if one wishes to know the true nature of a relationship in a faithful painting!

In art, dogs have often been used as symbols of fidelity, faithfulness, protection, wealth, and unconditional love. You can see examples of it as far back as the Egyptian deity Anubis, of the Early Dynastic period, donning the head of a jackal on the body of a man. Anubis was known as their patron deity and was also considered the protector of the bodies of the dead. Approximately 4,686 years later, during the High Renaissance, Titian painted his Venus of Urbino, as seen below, where a dog sits at Venus’ feet representing commitment and closeness to the subject’s lover.

During the Renaissance, dogs were often used to depict loyalty in and out of romantic contexts, in works such as The Washing of Feet by Jacopo Robusti Tintoretto. During the following art periods, the tradition persisted, becoming a staple for many artists long after Titian like Anne-Louis Girodet, Joseph Wright of Derby, and more.

Titian’s Use of Dogs in his Works

Venus of Urbino is a fine example of the use of dogs in terms of fealty or devotional relationships in art. The painting is argued to be a painting commissioned to celebrate the marriage of the woman and the viewer, or of a courtesan enticing the viewer. The dog we see next to the woman’s feet is an indicator of the devotion that the woman has towards the intended viewer.

Courtesan, or wife, the woman looks at the viewer with affection and sensuality. The dog at her feet gives an air of longing for a single person. It gives off a type of devotional lust. The dog elevates the nude figure into a woman who is truly loyal to only one. Over ten years later, Titian maintained his use of dogs in Venus and Adonis.

Titian’s Venus and Adonis is not as salacious as the prior piece, conveying a more pure longing. The dogs shown in the lower right corner have a dual role. The dogs are meant to convey that Adonis feels protected, but also show Venus’ devotion, wanting him to listen to her pleading. The story of Adonis and Venus is a simple one: Venus fell for Adonis because she was pricked by Eros’ gold arrow, feeling a devotional true love towards Adonis. In the end, he died because he did not take her words seriously, assuming he knew better and died before she could meet him once more. Venus devoted herself to praying for him on the day of his death and deified him through the creation of the anemone flower. This is undeniably a faithful painting due to Venus’ loyalty to Adonis.

Titian conveyed that this love and devotion were not reciprocated as the dogs do not focus on either of them. One of the dogs looks away completely whilst the other looks rather dumb, eyes glazed over lacking understanding, like Adonis.

As stated prior, dogs aren’t only used within a romantic context. They have a wide variety of uses in devotion and platonic devotional relationships are one. The Washing of Feet by Jacopo Robusti Tintoretto, another Renaissance piece, is a prime example of that. The painting depicts Jesus washing the feet of his disciples. The washing of the feet signifies the perpetual cleansing of sin. Jesus’ disciples are being absolved from their sins, conveying fealty, a devotion that goes both ways.

And how do we, the viewer, know that there is a duality to this act? We look at the dog perched to the left of Jesus and his disciples. The washing of the feet is an act of cleansing, affection, and devotion. The disciples are devoted to Jesus due to his miraculous acts and his ability to cleanse him. Jesus’ devotion is in the act itself. It is a devotional relationship to the core, making this a very pure faithful painting.

Paolo Veronese’s faithful painting The Devotion of Kings depicts the story of the Three Kings, or Biblical Magi, after the birth of Christ. The kings prostrated themselves before Mary and Christ, having given gifts to Baby Jesus. To the bottom right there is a hound that almost blends into its surroundings. I believe this can be interpreted as devotion to Christ, a miracle, and a sign from the stars. The Three Kings were foreign, not necessarily Christian or Hebrew, so it can be said that this devotional relationship, or exchange, to Christ blurs the lines of faith and wonder. Hence why the dog is not so obviously placed, as their devotion is not so obvious as the prior piece.

Paolo Veronese often used dogs as a means of depicting where the subjects were relationship-wise. His Four Allegories of Love series is a prime example of such. The four paintings conveyed the overall difficulties and positives of love. All of which were romantic in nature but touched on how it affected not just the lovers but those around them as well.

Unfaithfulness is the first piece of the series. It shows a woman who found herself in a dalliance with another man after being devoted to another. The viewer has no idea who she should be with as she stands before these two clothed men. We see Eros looking on disappointedly. This is far from being a faithful painting. What can be noted is that due to her infidelity, there is not a dog in sight.

Unlike the first piece of the series, the final piece has a dog looking on at the two lovers, as they are rewarded for their devotional relationship. Their relationship is blessed by, supposedly, Venus herself. The woman and the man are dressed in finery, holding an olive branch, the symbol for ending a disagreement. The faith that Venus has in them and they now have in each other makes this an extremely faithful painting. The dog is a constant reminder that they are undeniably faithful to one another, a reminder of a completely devotional relationship.

The Sleep of Endymion

The Sleep of Endymion by Girodet is a painting focusing on the story of the moon’s shatteringly toxic devotion to the aeolian shepherd, Endymion. The moon loved him so greatly and found him so beautiful that she wished to look upon him for all eternity. This is, in a way, a devotional relationship if not a one-sided one. Eros makes another appearance in this piece, conveying the nature of this one-sided love, which is similar to the myth of Venus and Adonis, in that the devotion is pure yet not reciprocated.

Endymion’s dog sleeps in the shadows waiting for his master. The dog conveys devotion, but being shown in the shadow shows that this devotion is not completely pure. I’m not sure if this could be considered a faithful painting due to its nature. It could be that this conveys more of the moon’s lack of faith in the shepherd. The toxic nature of Endymion and the Moon’s devotional relationship is evident due to a dog that is there but also seems abandoned.

Lost love is something that many can relate to. For thousands of years, it has been a subject of intrigue and romance. The Corinthian Maid is no different. Sir Joseph Wright’s painting depicts a popular Greco-Roman myth that is both romantic and sorrowful. Dibutades sculpts her lover who left Corinth, hoping to remember him by the relief sculpture she creates. Ironically, Sir Joseph Wright used a relief of Endymion as his reference for Dibutades’ lover, one devotional relationship inspiring another! Just like with the sleep of Endymion, there lies a sleeping dog at the feet of her lover. This shows her eternal devotion to him.

William Hogarth’s Cynical Use of Dogs

Devotional relationships born from love were not in the cards for subjects painted by Hogarth. Knowing that William Hogarth’s pieces are typically realistic, in a very cynical way, will easily give one insight into how and why he ever used dogs in his pieces. In his Marriage à-la-mode series, dogs are only ever used to convey a lack of devotion or displeasure in a union.

In the first piece of this series, The Settlement, an arranged marriage is being finalized. Money and title were the only reason for the union, like most marriages of the time. So, of course, the daughter and son of the Alderman and Earl in the piece are not happy with the union. The marriage lacks love, which is depicted in the two dogs on the bottom left who are chained to one another. Neither looking at the other, eyes facing away from the happenings from the room. Displeasure and disappointment are evident as their feelings are insignificant, hence how small the dogs appear tucked away in the corner. They have a devotional relationship, but not one of devotion to one another but to their fathers and their duty. The dogs convey devotion to responsibility not love in Hogarth’s works.

Loose and frivolous devotion would be one way to describe Jean-Honoré Fragonard’s The Love Letter. The painting is French Rococo in nature and style as the woman looks flirtatiously at the viewer. The woman’s dog also looks on at the viewer, giving the piece an air of fleeting devotion but devotion nonetheless. This was an era of lustful liaisons and fiery yet short-lived love. There was a momentary devotional nature to the French Rococo movement, between young and old lovers alike.

We could also look at the dog as a parallel to the man who sent her the flowers and the love letter. Him being fully devoted to her, like her dog, yet she does not devote herself completely to him, hence why the dog sits behind her. That is not to say that Fragonard did not believe in innocent, or lasting, love as well.

In his Love Letters, the young people look at the letters that they sent back and forth to one another in flirtation and courtship. They are secluded in a nest made out of flowers, hidden away from others, as they revel in one another. The dog at their feet gives insight into their devotion to one another, a devotional relationship that feels beautiful and complete. The dog seems to be a symbol that will continue to persist as a true symbol of devotion, romantic or otherwise.