First ruler in the Year of the Four Emperors, Galba led a brutal and unpopular regime, but it ended abruptly after only seven months when he was assassinated by his closest ally. 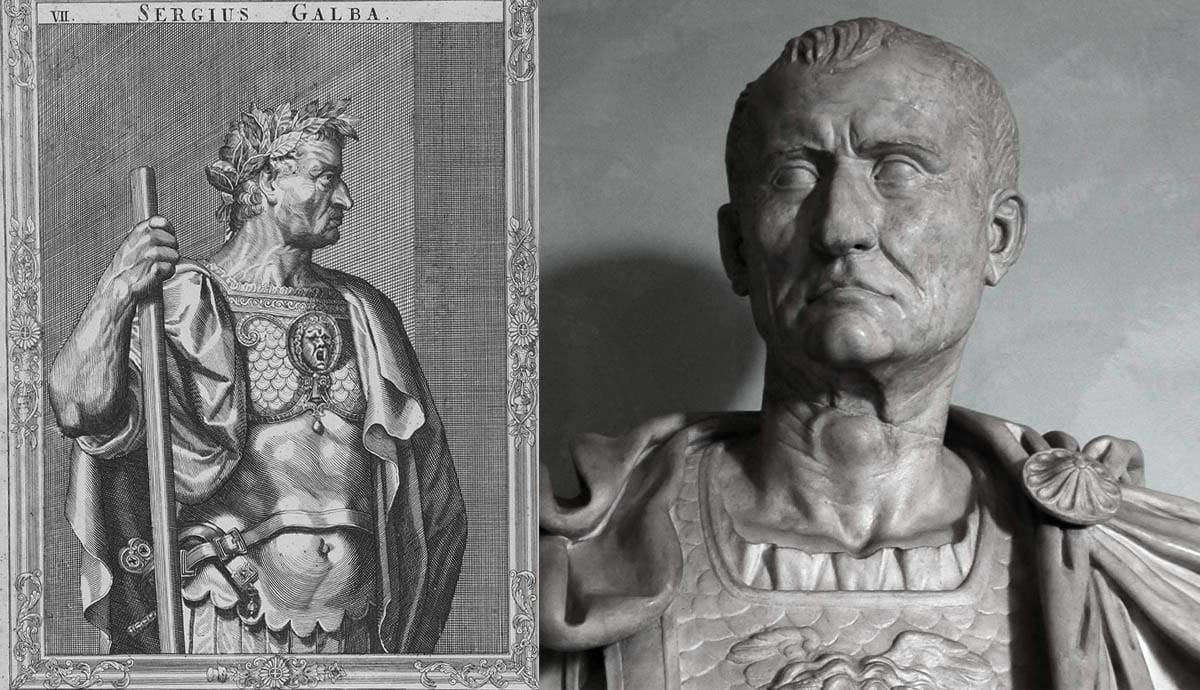 The cold and calculating Emperor Galba only ruled Rome for seven months but his short reign was filled with enough drama to secure his rightful place in history. First to lead the terrible ‘Year of the Four Emperors’ in 69 A.D., he made a series of hugely unpopular changes including drastic cuts to public spending, horrible treatment of criminals and the horrific execution of army troops. But before he could proceed with this brutal regime, he was cruelly assassinated by one of his most trusted allies. Let’s take a look at some of the most fascinating stories surrounding Galba’s tumultuous life.

1. Augustus Predicted That Emperor Galba Would One Day Rule Rome

According to the Roman historian Suetonis, Emperor Augustus singled out Galba when he was a very young boy, telling him “you too will taste a little of my glory child.” Born under the name Servius Sulpicius Galba Caesar Augustus, Galba was a precocious bright youngster who was part of a noble family but he had no relation to the ruling Caesar family so the prophecy from Augustus seemed unlikely at the time. But Galba was later adopted by Livia Augusta, the wife of Augustus in his youth and she helped him advance into Roman royalty.

2. Galba Was Ambitious and Hard-Working

A determined and ambitious Galba began his senatorial career at a very young age, working his way up the Emperor’s service. He began a career while still underage but proved himself worthy of promotion, enjoying the prestigious role of praetor in 20 A.D. One of his greatest early achievements was establishing a display where elephants walked across ropes in front of the Roman public.

Galba became consul in 33 A.D. and earned a reputation for his truly terrifying military might in Gaul, Germania, Africa and Hispania. He was ruthless and uncompromising, leading with old school discipline which struck great fear into his armies; historical accounts tell of horrible punishments, torture and death doled out for the most trivial of crimes.

3. He Refused The First Offer To Become Emperor

When Emperor Caligula died, many tried to persuade Galba to take his place but he pointedly refused. Instead he let Emperor Claudius take up the role. Claudius realised Galba was no threat to his leadership and made him a much-trusted close advisor, appointing him as pro-consul of Africa. After the death of Claudius, Galba proved his loyalty further by choosing to enter semi-retirement rather than compete with Nero for the throne. Suetonis suggested Galba’s unattractive appearance might also have made him appear less threatening and therefore more trusted for work with high profile dignitaries, describing him as medium height with no hair, a hooked nose and a heavyset body disfigured by arthritis and gout.

4. Galba’s Leadership Signaled The End Of The Julio-Claudian Dynasty

Galba was busy leading a gruesome battle in Spain when the offer of leadership came to him. Rumours began spreading about Nero’s downfall; knowing Nero had no direct successor, Galba finally saw his opportunity to shine. When news hit that Nero was dead Galba marched into Rome alongside his loyal ally Otho and their army, assuming the throne. This move marked Nero as the last leader of the Julio-Claudian Dynasty and Galba as the ruler of a new era in Roman history.

5. He Was Deeply Unpopular

It wasn’t long before Galba’s prickly, taciturn nature turned everyone against him. Selfish and greedy, he was said to enjoy eating throughout most of the day, while dishing out harsh, punitive punishments against real and imaginary enemies. One of his first motives was to unravel the toxic legacy left behind by Nero, but his policies didn’t go down well. His snap decision to execute Nero’s army troops caused shock and uproar, while high taxes and spending cuts aimed at rebalancing Nero’s extravagance were despised by the Roman people – they particularly resented his rejection of gladiatorial games as a waste of money. But his brutality didn’t stop there; Suetonis claimed he wilfully sentenced hundreds of Roman citizens to death without any trial or evidence.

6. He Was Assassinated By A Close Ally

Galba was in his seventies by the time he took the throne. His wife and children had died many years earlier so Galba had no direct successor, but he chose to adopt Lucius Calpurnius Piso Licinianus as his son and heir. This act greatly angered Galba’s long-standing ally Otho, who believed he should have been the rightful heir. In fact, Otho was so angered by the slur that he bribed the Praetorian Guards to murder both Galba and Piso in the Roman Forum. Legend has it Otho asked to have their severed heads brought to him on a platter to prove they were really dead. Once the deed was done, in 69. A.D. Otho was declared the new leader.

7. The Year Of The Four Emperors

Galba’s grand aspirations as Roman Emperor never came to fruition as his leadership lasted less than seven months. Rather than leaving behind a lasting legacy, Galba is probably best known today for spearheading the turbulent spell in Roman history known as the Year of the Four Emperors, in which four emperors ruled in quick secession throughout the year of 69 A.D. They were Galba, followed by Otho, Vitellius and Vespasian.

After brutally assassinating Galba, Otho’s reign was even shorter than his predecessor, lasting just three months. Not long after assuming the title Otho was swiftly overthrown by Vitellius, commander of the army in Germania inferior. Sensing that he had already lost the battle, Otho killed himself rather than face a brutal ending. But Vitellius was a gluttonous and indulgent leader who was deeply unpopular. Just eight months later another rival appeared on the scene, this time the much more credible military giant Vespasian, who led an army in capturing and killing Vitellius in December 69 A.D. Despite this horribly violent start, Vespasian went on to lead the well-known Flavian Roman Dynasty which marked a new period of remarkable stability and peace across the Roman Empire, rivalled only by the golden era of Rome’s first Emperor Augustus.