Euripides, the final Greek tragedian, closed out the era of Greek tragedy with a skillful attention to human drama not appreciated till after his death. 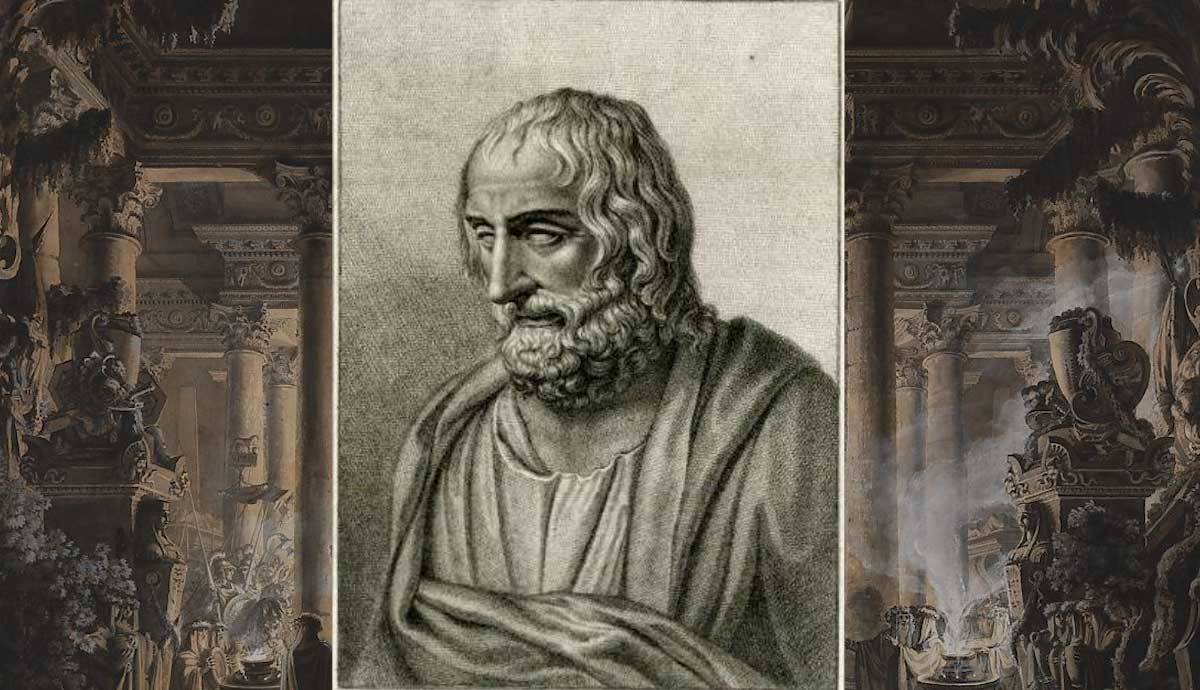 Euripides was deeply concerned with the authentic inner lives of his characters—and presented them to the audience in their unabashed wholality. This gave him his reputation as the most criticized of the great Greek tragedians.

Euripides was born somewhere around the year 480 BCE, a quarter of a century after the death of Aeschylus. He was likely born on the island of Salamis, most known for the famous Battle of Salamis. He was the contemporary of Sophocles; only about 15 years apart in age.

Little is known for certain about Euripides’s childhood and personal life; his is the least recorded life of the great Greek tragedians. Historians debate his social status in childhood and that of his parents, though scholars do know that he fathered three sons.

Euripides was himself something of a philosopher; he kept company with them, including Sophists such as Protagoras and natural philosophers like Anaxagoras. He was often attentive to and critical of society in his work. This same attention and critical mindset likely developed his apparent misanthropy, the subject of legend.

Perhaps the most famous legend of Euripides, similar to the falling turtle which is said to have killed Aeschylus, is the Cave of Euripides. This is said to be the place where Euripides retreated to write his work away, according to Satyrus and Philochorus.

There is in fact a real Cave of Euripides, found containing clay fragments bearing his name, on the south coast of the Greek island of Salamis. There is no firm evidence that this is indeed the cave where Euripides retreated, or even that there exists such a cave at all.

To address this article’s title—Euripides was not precisely the last Greek tragedian, but he is the final of the three most-acclaimed tragedians of Ancient Greek theater and the last one about which anyone says anything of note. This age of tragedy, ushered out by Euripides’s sunset, is followed swiftly by an age of comedy. Much of Greek comedy is simply playing with the themes of tragedy and mocking the tragedians who came before.

Unfortunately for him, Euripides is not incredibly well-liked among the comedians—or perhaps very well-liked, depending on one’s interpretation. In any case, the comedians had much to say.

Euripides was often criticized, most famously by the comedian Aristophanes who was loose with his quips toward the tragedian. Scholars often note that this did not indicate a lack of respect for Euripides. Aristophanes mocked him in his play the Frogs, which was performed at the City Dionysia just one year after the death of Euripides. During the age of comedy following Euripides’s death—and those of the other great Greek tragedians—criticism for his writing style, his (supposed) lower class upbringing, his morality or lack thereof, and often, criticism for his own criticisms abounded.

Given to examination and introspection, likely due to his association with contemporary thinkers, Euripides writes with a critical eye toward religion. He is well-known now as an atheist writer and the Greek atheist tragedian. He dismisses the Olympian gods outright in many cases, and they appear in his plays as petty, petulant devices of convenience, with little of the reverence long given to the gods by poets and playwrights. Famously, Euripides writes in his lost work the Bellerophon, “If gods do shameful things, they are not gods.”

Beyond the criticisms of Euripides’s ideas and attitudes, critics such as Aristophanes have remarked simply on the fundamental staying power of Euripides’s work. “My poetry did not die with me,” proclaims Aristophanes’s Aeschylus in the Frogs, “but [Euripides’s] did once he died.” This is largely an irony that a reader sees here–indeed, Aristophanes may even have intended it to be read as such.

Euripides in Contrast to the Other Tragedians

Of all the Ancient Greek tragedians, one might argue that the staying power of Euripides’s work is the strongest, as seen by his posthumous rise in popularity during the Hellenistic Period. Euripides walked among giants. In the Frogs, this is highlighted by Aristophanes’s preferential treatment of Aeschylus, but much of Euripides’s unique strengths shine brightest when he is held up against the other tragedians; just as Sophocles is best understood in dialogue with his predecessor, Aeschylus, so is Euripides best appreciated in concert with them both.

While Aeschylus too was interested in the nature of criticism and rebellion, evident in his works such as Prometheus Bound, he possessed, to borrow from Edith Hamilton’s review of him, “the soldier’s temper.” Euripides, in many ways, intensifies and develops the themes and opinions of Aeschylus; Aeschylus did not mourn over atrocity like Euripides. Where Aeschylus is haunted by the horror of war but submits to the necessity of it, Euripides’s rejection of war is scathing and despairing. Where Aeschylus is agnostic to the religion of the time, Euripides is atheist.

By the time Euripides begins writing, many stories have already been written. This does not thwart Euripides; he has more to say on the common myths. The Elektra is a play that Euripides writes near to the writing of Sophocles’s play by the same name; though scholars do not know precisely how near, due to dating difficulties. The Elektra is the rendition and addition of Euripides to the bloody cycle of the House of Atreus. Euripides writes three other works which are all located throughout the chronology of the Atrean bloodlines: his Iphigenia in Aulis, Iphigenia Among the Taurians, and the Orestes. The Elektra is the only work that is extant in the corpora of both Sophocles and Euripides.

Both plays follow parallel plots: after the murder of Agamemnon, Elektra and her brother Orestes plot and kill their mother and her lover to avenge their father. Notably, the main character in Sophocles’s Elektra often seems to be Orestes; in Euripides’s play, it is clearly Elektra.

Thus, in the Elektra of Sophocles, it is Orestes who strikes the killing blow to his mother and Aegisthus. In that of Euripides, it is Elektra herself who kills her mother.

Sophocles shows Orestes and Elektra towed along toward the murder of Clytemnestra and her lover by the chorus, the very honorable will of the gods, and fate–“In evil times we are forcibly compelled to act in evil ways,” says Sophocles’s Elektra.

Euripides’s Elektra is never forced, always the force instead. “Orestes is still young, and had a great father–can’t he kill one man?” she taunts in Euripides’s version, a startling tonal change from the Elektra of Sophocles. Later, she says bluntly, “The killing of my mother I shall claim myself.”

The Inner Life of Euripides

Sophocles’s Elektra often emphasizes the honor denied to her father in his slaying and granted by his avenging. In Euripides’s telling, after the killing of Aegisthus by Orestes, Elektra gives at length a speech about the horrors and suffering the false king caused her and her family. She speaks about revenge and its fulfillment, but not much honor or its restoration.

The Elektra of Euripides gives less credence to the idea that the House of Atreus suffers due to divine motion, but more so to the active roles that Elektra and her brother, and Clytemnestra and Aegisthus as well–play in their ensuing tragedy.

Euripides was not interested in divine justifications of tragedy. He was interested in mortal ramifications. In the inner lives of his characters, he found drama, whereas other tragedians have found it in external conflicts. A Euripidean tragedy is often man- or even self-made, whereas inexorable fate itself seems to doom the plays of other tragedians.

Hippolytus is a classic example of the sad, self-damning drama that Euripides seems often interested in, as is The Bacchae and the Medea. In these plays, his characters seem to walk themselves directly off of their own cliff’s edge. His Herakles dialogues directly with the belief that gods may be responsible for the actions of men, and not the men themselves.

Herakles staunchly refuses to agree that the gods have caused him to kill his wife and children despite the explicitly-divine madness sent down upon him which caused him to do just that. Instead, he argues that he is ultimately and entirely responsible, and refutes altogether the commonly-accepted belief that the gods can exist as they are described by the writers and the religious of the time. Euripides believes that men are the reason for suffering as well as the sufferers, and he mourns it.

The Tragic Style of Euripides

Unlike his predecessors, who use tragedy to explore nobility in suffering and the satisfaction of wisdom gained, Euripides seems to shrug out of that great debate. With a jeweler’s eye, he examines in a new light the themes of fate and submission to it, and studies the reciprocal tragedy of humanity. He illuminates for the audience the depth and dimension of human pain, and our own culpability in its creation.

This human pain is the great equalizer. Euripides renders in great detail, with equal significance, the pain of slaves, even war captives, all those at the bottom of the Greek hierarchy. This is what gives the work of Euripides such staying power. Aeschylus filters his tragedy through a lens of wisdom, Sophocles through one of nobility, but Euripides only looks at his tragedies with real sadness. How sad that humans, by virtue of being humans, should all suffer so profoundly.

By Lynnie McIlvainBA Classics (Classical Studies)Raised in Washington State, Lynnie is an alumna of the Clark College where she primarily studied Art History and English. She went on to obtain her bachelor’s degree from the University of Puget Sound in a field about which she is even more passionate: Classics & Ancient Mediterranean Studies. She currently lives in Tacoma WA, and quietly nurtures her love of literature and writing, foraging, and languages alongside her professional career in nonprofit development.

Sophocles: Who Was the Second of the Greek Tragedians?