HomeAncient HistorySophocles: Who Was the Second of the Greek Tragedians?

Sophocles: Who Was the Second of the Greek Tragedians?

“He saw life as hard, but he could bear it hard,” says Edith Hamilton of Sophocles. This is the truth of the second great Greek tragedian. 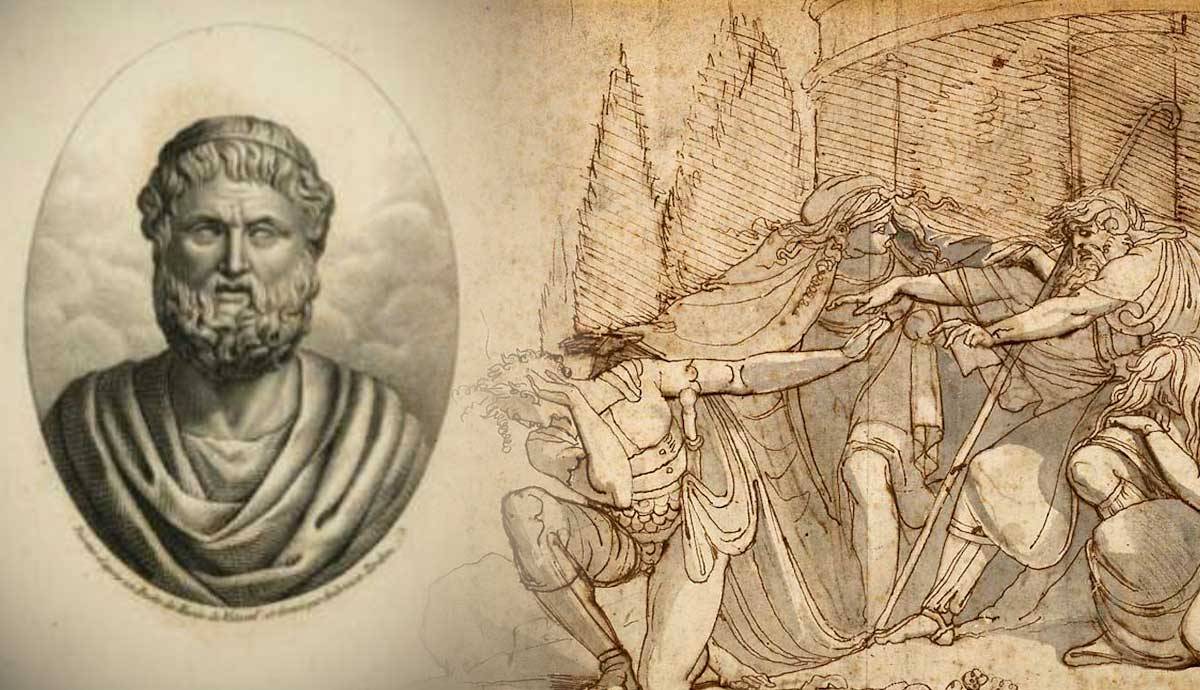 In Antigone, Sophocles writes, “Nothing vast enters the life of mortals without a curse.” Sophocles lived a life of wealth and renown as the most successful of the three great Greek tragedians, but was cursed by an ambivalence to it.

Sophocles was born in 497 BCE in a small village just outside of Athens named Colonus. His father was a wealthy armorer, and due to his father’s fortune, Sophocles was well-educated and trained in athletics. His skill and intelligence made him locally popular, so much so that to celebrate the great Greek victory at the Battle of Salamis (of which his predecessor Aeschylus was a veteran), Sophocles was chosen to lead the celebratory victory chorus called a paean. He was only sixteen years old at the time.

As he grew up, he was active in the Athenian political community; over his lifetime, he likely served as one of the strategoi a total of three times. At the age of eighty-three, he was elected as a proboulos to shepherd Athens through its financial and social recovery following the defeat at Syracuse. In his final year of life—406 BCE—Sophocles once again led a chorus for the city, this time in honor of the death of his rival, Euripides, prior to the coming Dionysian festival.

Given the vivid, wrenching nature of Ajax, one might have already guessed upon reading that Sophocles served in the military later in life as well. His first conflict was the Samian War, in which he served beside the famous strategos Pericles. Sophocles also served as a strategos in the Archidamian War, and he lived through the lengthy Peloponnesian War.

Not so often discussed, at least in modern conversation, are the more intimate areas of Sophocles’s personal life. Several ancient authors, including Athenaeus, write of Sophocles’s enjoyment of young men. In book 13 of his work the Deipnosophistae, Athenaeus recounts the following story from a poet called Ion of Chios, who was a contemporary of the great playwrights and perhaps indeed knew Sophocles personally. Athenaeus most certainly did not; he lived hundreds of years after Sophocles’s death. The scene takes place in a classically Greek symposium:

“Sophocles, too, had a great fancy for having boy-favorites… And accordingly, Ion the poet… writes thus: I met Sophocles the poet in Chios… and when Hermesilaus… entertained him, the boy who was mixing the wine was standing by the fire, being a boy of a very beautiful complexion, but made red by the fire: so Sophocles called him and said, ‘Do you wish me to drink with pleasure?’ and when he said that he did, he said, ‘Well, then, bring me the cup, and take it away again in a leisurely manner.’

And as the boy blushed, Sophocles said…’How well did Phrynichus speak when he said, The light of love doth shine in purple cheeks.’…For [Sophocles] asked him, as he was brushing away the straws from the cup with his little finger, whether he saw any straws: and when he said that he did, he said, ‘Blow them away, then…’ And when he brought his face near the cup he held the cup nearer to his own mouth, so as to bring his own head nearer to the head of the boy…He took him by the hand and kissed him. And when all clapped their hands, laughing and shouting out, to see how well he had taken the boy in, he said, ‘I, my friends, am practicing the art of generalship, since Pericles has said that I know how to compose poetry, but not how to be a general; now has not this stratagem of mine succeeded perfectly?’” (Found in Deipnosophistae 603f-604f.)

Successes and Innovations in the World of Greek Drama

From all of this, it is clear that Sophocles led a rich life outside of his career as a playwright, though that career was no less impressive for that fact. He is the most celebrated and well-adorned playwright in Athens. He won twenty-four dramatic competitions, participated in thirty, and never took a rank below second place. For comparison, his predecessor and contemporary Aeschylus won thirteen competitions in his lifetime. His successor Euripides won four.

Sophocles wrote, to the best estimation of scholars, over 120 plays. Unfortunately, a mere seven of them survive intact. In 468 BCE, Sophocles finally beat Aeschylus at the Festival Dionysia for the first time. There is much discussion and research which explores Sophocles’s changing style, tragic career, and innovations in the genre. Like Aeschylus, Sophocles adds an additional actor to the traditional cast–the third actor this time. Aeschylus adopts this third actor into his own contemporary work and it sets a standard for future playwrights. This addition of further actors allows for a depth of plot, conflict, and character development that is less accessible with a more limited number of actors on stage. These tragic innovations are attributed to others in other works but Aristotle attributes them to Sophocles.

The Mortal Struggle in Sophocles’s Work

One of Sophocles’s most famous works is Antigone. It is the final play in a trilogy by Sophocles, often referred to as the Oedipus trilogy or the Theban plays. Though it is the third play according to the chronology of the Oedipus tale, Sophocles wrote it first. He wrote none of the Oedipus trilogy chronologically, and in fact, wrote the words across 36 years. Antigone was the first performed in 411 BCE. Not long after the performance of Antigone, Sophocles was appointed as a strategos in the military and charged with marching a military expedition against Samos.

The play is the quintessential Sophocles: It discusses fate as inexorable, and the evasion of fate as deservedly damnable. To resist the ways of the world is, in Antigone as well as Sophocles’s entire imagining of the Oedipus trilogy, the ultimate evil.

The cycle of the royal Theban family toiling but failing to escape their fate ultimately births Antigone’s troubles. Sophocles almost seems to be endorsing fate as natural law, and natural law as the will of the gods. While Oedipus is ruined for his attempts to bully fate instead of carrying it out naturally, Antigone is a heroic martyr for her resolute commitment to carry out the necessity of her brother’s funeral rites. Creon is villainized for his tyranny, but most importantly, for his denial of the natural will of the gods–for humans to be properly buried. For his trouble, he sees his son dead and with him, Creon’s wife and family line. No character of the trilogy survives Antigone without total ruination.

The Tragic Style of Sophocles

Sophocles can be seen as in dialogue with his predecessor Aeschylus. He exists near to Aeschylus, participating in festivals together, celebrating battles. His play Antigone begins where Aeschylus’s Seven Against Thebes leaves off. We understand much of Socrates through comparison with Aeschylus.

Where Aeschylus is determined and rebellious in the face of bleakness, Sophocles is receptive. He believed that “nothing vast enters the life of mortals without a curse” which is to say most things do. While Aeschylus finds hope and vigor in tragedy, Sophocles finds nothing there but tragedy. He does not need it to be or to mean anything else. He accepts life as he is given it.

The final lines of Antigone, from the choragos, are:

No wisdom but in submission to the gods.

And proud men in old age learn to be wise.”

In contrast, the final lines of Aeschylus’s Prometheus Bound are:

Who rolls around the light that all things share,

You see these unjust wrongs I must endure!”

This provides readers with the contrast necessary to understand the nuanced style of Sophocles. Life is lived properly when a man has submitted to his fate and to the gods, according to Sophocles. Aeschylus rails against the gods as capable of injustices, a claim which one may come now to understand that Sophocles would reject. He is not concerned with the question of whether or not fate is just—fate is given in its own measure to each man, and a good, wise man will accept it even as it burdens him. Both men believed their positions noble. Aeschylus viewed the pursuit of justice and meaning-making as noble and likewise, Sophocles viewed this submission to fate not as a weak surrender, but as an active and noble undertaking.

By Lynnie McIlvainBA Classics (Classical Studies)Raised in Washington State, Lynnie is an alumna of the Clark College where she primarily studied Art History and English. She went on to obtain her bachelor’s degree from the University of Puget Sound in a field about which she is even more passionate: Classics & Ancient Mediterranean Studies. She currently lives in Tacoma WA, and quietly nurtures her love of literature and writing, foraging, and languages alongside her professional career in nonprofit development.

Socrates Sips Wine & Discusses Love: What Happens at a Symposium?