The Horrifying Story of Prometheus Bound Told Through 15 Artworks

15 vivid works of art bring the horrifying story of the Titan Prometheus to life through Aeschylus’s tragedy, Prometheus Bound. 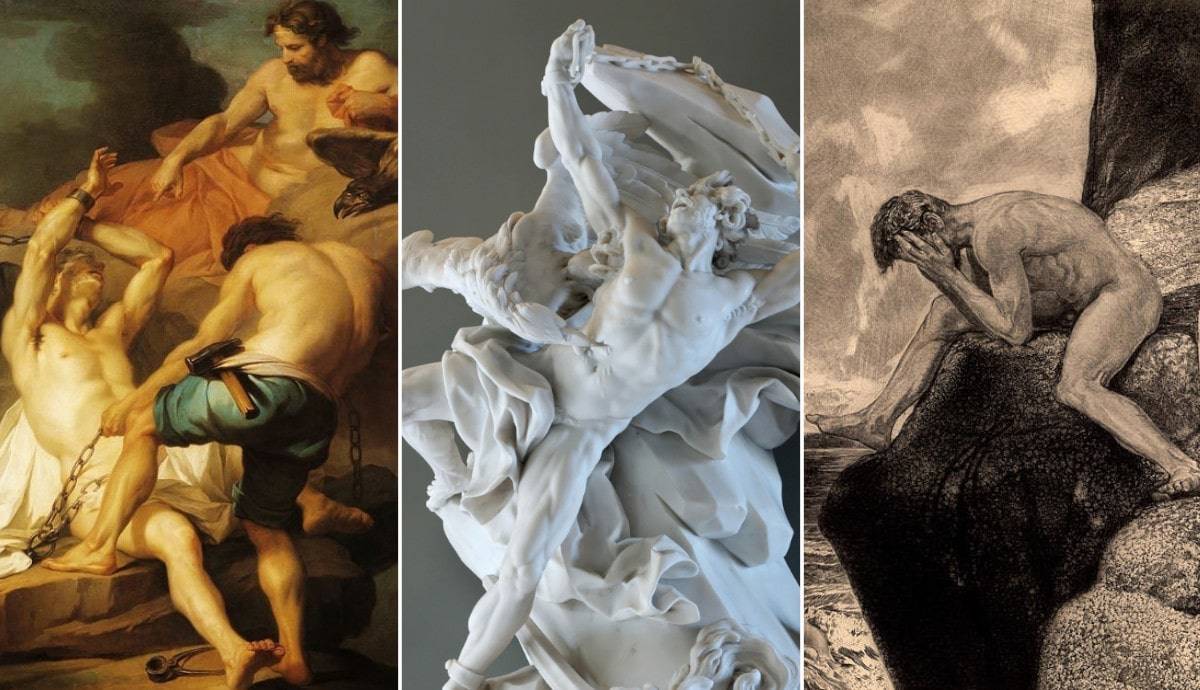 Prometheus’s Story has been told and retold over millennia, with interpretations of its meaning changing depending on the author, but the core mythology can first be seen in Hesiod’s Theogony. Later authors would build upon these myths, turning them into compelling philosophical musings. Greek playwright Aeschylus chose Prometheus as the central character of a multi-part series. The only play that has survived to this day is the first in the series, the tragedy of Prometheus Bound.

The Mythology Behind Prometheus Bound

Prometheus was a Titan, the son of Iapetus. His father was a member of the first generation of gods, ruled by Cronus and overthrown by Zeus and his siblings in the great Titanomachy. Prometheus’s role in that war is one aspect of the stories that is changeable. He clearly did not take any part in actively opposing Zeus’s coup, and in Aeschylus’s Prometheus Bound, Prometheus actually had a critical role in securing Zeus’s victory. Hesiod names Prometheus merely as a trickster, but later interpretations of Prometheus’s story provided him a far more sympathetic cause.

In the aftermath of the great war, all the creatures of the earth had been destroyed. Zeus directed Prometheus and his brother Epimetheus to make new creatures to walk the planet, and he gave them various gifts to be bestowed upon their creations. Prometheus carefully fashioned men out of clay in the image of the gods, but his brother quickly created as many different animals as he could, giving each of them the gifts that Zeus had allowed them. When Prometheus had finished, the animals were stronger and faster, and sat warm at night in their thick coats while the humans froze.

Feeling sorry for his creations, Prometheus asked Zeus if he could teach them how to make fire. Zeus refused as fire was sacred to the gods, so Prometheus stole it and brought it to mankind. Initially angered, Zeus was appeased when men began burning the best meat on altars to the gods, being pleased with the sacrifice. Yet once again in his story, Prometheus defied the gods in favor of his humans. He had them butcher an ox and split the meat into two piles. In one were all the best cuts of meat, but the meat lay hidden beneath sinews and bones. In the other, Prometheus told them to cover the remaining bones and entrails with marbled fat. He invited Zeus to come down to earth and to choose the pile that he desired as an offering.

Zeus chose, as expected, the pile that looked the best but contained all the scraps beneath, and at that, Zeus became enraged. Prometheus had stolen sacred fire for mankind, and now taught them how to trick and cheat, even cheating the gods. To punish humanity, Zeus asked Hephaestus, Athena, and Aphrodite to craft for him a beautiful woman, modeled after Aphrodite. They named her Pandora.  Zeus bestowed upon her a deep curiosity, gave her a box that he told her never to open, and offered her in marriage to Epimetheus. Though suspicious, Epimetheus was entranced by Pandora’s beauty and could not resist the offer. Of course, Pandora’s curiosity became too much for her, and she peeked inside, accidentally releasing from the box all the evils of the world, and only just managed to preserve hope.

Prometheus Bound to the Rocks of the Caucasus

Zeus’s punishment for Prometheus was equally horrible. Under his father’s orders, Hephaestus, reluctantly for he had a kind heart, chained Prometheus to the top of the Caucasus Mountains. Every day an eagle, the symbol of Zeus, would swoop down and peck out Prometheus’s liver to eat. However, as he was an immortal Titan, each night the liver would grow back again, and the eagle would return the following day to eat it once again, on and on, for eternity. This is Prometheus’ story up until Aeschylus’ Prometheus Bound.

The basic mythology makes little, if any, comment on the actions of Zeus and Prometheus and does not speculate upon the justice of the punishment. However, Aeschylus, a Greek playwright of the 5th and 6th centuries BCE, often called the father of Greek tragedy, chose to examine Prometheus’s story as a philosophical dive into morality and oppression. In his version, called Prometheus Bound, Prometheus is a hero of mankind and victim to Zeus’s cruel and unjust tyranny. Even Hephaestus condemns his father’s actions, warning Prometheus, “thy long watch shall be comfortless, stretched on this rock, never to close an eye or bend a knee; and vainly shalt thou lift, with groanings deep and lamentable cries, thy voice; for Zeus is hard to be entreated, as new-born power is ever pitiless.”

The Oceanids and Their Father Offer Sympathy

Newly chained to the mountain, Prometheus Bound begins with the unfortunate Titan lamenting his fate. He is soon joined by the daughters of the Titan Oceanus, who have come to commiserate with Prometheus. In his conversation with them, he explains how he aided Zeus in his triumph over the Titans and that when Zeus expressed his desire to destroy all mankind, Prometheus intervened, stealing the sacred flame, teaching them arts, saving them from Zeus’s plans and most of all, granting them the gift of hope.

Next in Prometheus Bound, the girls’ father, Oceanus, comes to offer his pity and his aid, suggesting that he plead before Zeus for mercy. Still, Prometheus convinces him to abandon the idea, concerned that Zeus will merely include Oceanus in his punishment. With the departure of Oceanus, Prometheus is again alone with the old Titan’s daughters. The girls weep for him, but he does not wish to speak of his sufferings, and instead returns to describing the gifts that he gave to mankind; the knowledge of building with timber, brick, and stone, shipbuilding, the ability to tame and harness animals to aid in their work, the arts of medicine, divination, and crafts with brass, iron, silver, and gold.

The Wanderings of Io

The group is next joined by Io, weary and haunted, in the form of a white heifer. Io was a princess and priestess of Argos who caught the eye of Zeus. Though she tells Prometheus she initially refused his advances, Zeus overcame her objections and took her as a lover. When Hera became suspicious, he turned Io into the white heifer to shield her from the goddess’s jealousy, but Hera sent a gadfly to sting Io and drive her relentlessly across the earth.

At Io’s pleading, the bound Prometheus reveals her future: that she is doomed to wander and suffer long, but will eventually be restored to human form, and one of her descendants would not only be the strongest hero ever born but would also one day free Prometheus from his own captivity and suffering. She exits, and Prometheus becomes defiant, declaring that not even Zeus himself can reign forever and that he will one day make a marriage that will threaten his future.

Despite the warnings of Oceanus’s daughters, Prometheus continues in his assertions, and his words come to the ears of the omniscient Zeus, who sends Hermes down to extract the name of the one who would threaten Zeus. Hermes and Prometheus exchange heated words, and Hermes reveals Zeus’s  further threat:

“if thou wilt not obey my words, …first, this rocky chasm shall the Father split with earthquake thunder and his burning bolt, and he shall hide thy form, and thou shalt hang bolt upright, dandled in the rock’s rude arms. Nor till thou hast completed thy long term shalt thou come back into the light; and then the hound of Zeus, the tawny eagle, shall violently fall upon thy flesh and rend it as ’twere rags; and every day and all day long shall thine unbidden guest sit at thy table, feasting on thy liver till he hath gnawn it black. Look for no term to such an agony till there stand forth among the Gods one who shall take upon him thy sufferings and consent to enter hell far from the light of Sun, yea, the deep pit and mirk of Tartarus, for thee.”

Prometheus remains defiant and refuses to answer. Hermes advises the daughters of Oceanus to depart or else to be struck by the earthquake as well, but the girls refuse to leave, declaring they would rather bear Prometheus’s misfortunes than to be proven false friends. Hermes leaves, the thunder and earthquake come, and Prometheus and the daughters of Oceanus are swallowed up in the abyss, and the curtain falls on Prometheus Bound.

The Liberation of Prometheus Bound

Though Prometheus Bound ends as a tragedy, Prometheus’s story eventually has a happier ending. For just as Prometheus predicted, he was one day freed by a descendant of Io, none other than the great Greek hero and son of Zeus, Heracles. While traveling to complete his twelve labors, Heracles came upon Prometheus, chained to the mountain and tormented daily by the eagle. He killed the eagle and broke Prometheus free of his chains. Proud of his son’s strength, Zeus relented and allowed Prometheus’s freedom at last.

By Marian VermeulenBA History and PhilosophyMarian has been a devoted student of the ancient world since primary school. She received her BA in History and Philosophy from Hope College and has continued researching and writing on topics of ancient history from the Assyrian Empire to the Roman Empire and everything in between. She enjoys dabbling in historical fiction, but generally finds the actual true individuals of history and their stories more fascinating than any fictional invention. Her other passion is horses, and in her spare time she enjoys starting young horses under saddle and volunteer training for the local horse rescue.