HomeStories11 Facts About the Battle of Stalingrad

The Battle of Stalingrad was the bloodiest battle of the Second World War. These are 11 of the essential facts surrounding the struggle. 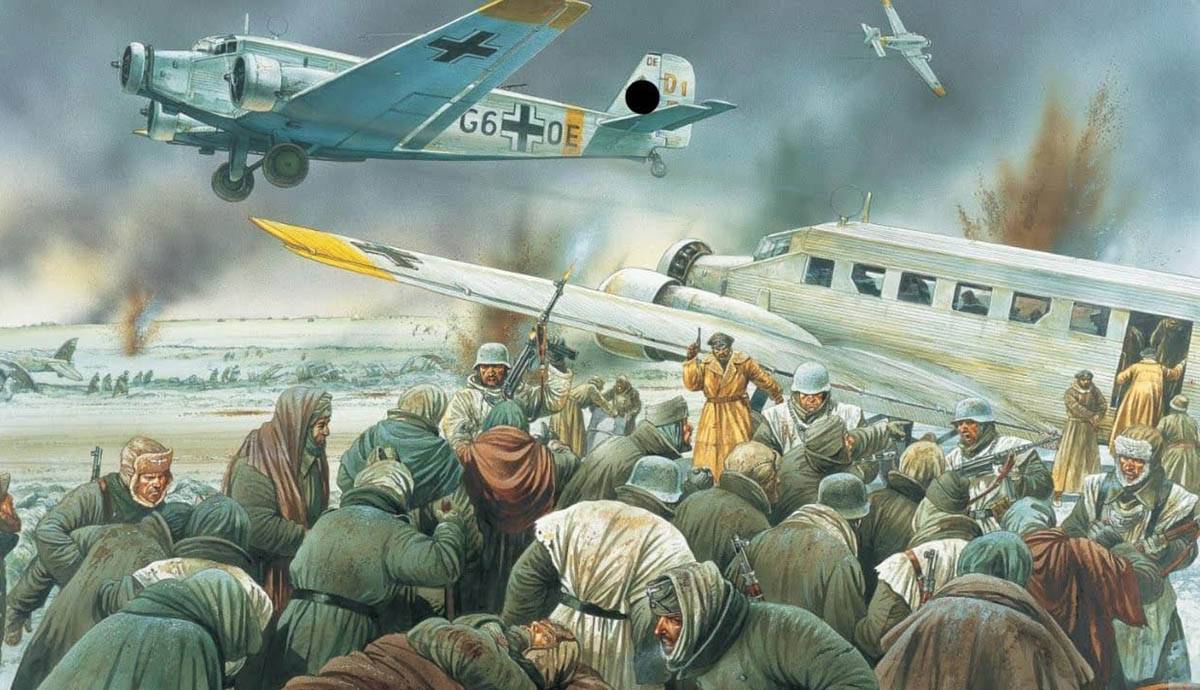 The Battle of Stalingrad is considered one of the greatest battles of all time and is certainly one of the biggest. It is regarded as a turning point in the war, and without the Soviet victory, it is doubtful whether they could have recovered enough to push back all the way to Berlin. Thus, the Battle of Stalingrad was one of the most defining moments in world history. In many ways, it defines the entire history of the war on the Eastern Front and serves as a reminder of the awful brutality of the conflict. Here are some interesting facts about it that show how unique the situation was.

1. What Was Stalingrad’s Strategic Significance, & Why Did the Fighting Take Place There?

Stalingrad was considered a vital position for several reasons: it was, first and foremost, an industrialized city on the Volga River. The river itself was a transport lifeline that allowed the Soviets logistical capabilities to fight the Germans. Taking Stalingrad would mean that the Germans would be able to sever Soviet supply lines. Stalingrad also protected the northern flank of the vital oilfields in the south, which were of primary concern to the German war effort. In addition, Stalingrad bore the name of Hitler’s hated arch-nemesis, and that was something by which Adolf’s ego could not abide!

2. The Battle of Stalingrad Turned Most of the City to Rubble

The Germans held overwhelming airpower. From the crossing of the Don and the push to the Volga, which took mere days, thousands of tons of bombs were dropped, destroying the Soviet ability to stop the German advance.

On August 23, the bombing of Stalingrad began. In 24 hours, the entire city was reduced to rubble. One thousand six hundred sorties were flown, with thousands of tons of bombs being dropped, including explosive and incendiary. Soviet records claim 90 German planes were lost, while German records claim only three.

Plumes of thick black smoke rose over two miles into the air, and the bombing continued for several more days, turning the rubble into smaller bits of debris. It is estimated that around 40,000 civilians lost their lives in the bombing.

3. The Rubble Favored the Defenders

General Paulus estimated that it would only take ten days for German troops to capture the city. Although the Germans finally managed to secure virtually all of the city, it took almost two months. Additionally, two key positions on the banks of the Volga still allowed Russians to get supplies through.

The fighting was bitter and bloody, with every yard being fought over. The Soviets found the rubble perfect for fighting a defensive action, and the Germans dubbed the brutal fighting Rattenkrieg (rat war). It is claimed at this point that the average life expectancy for any soldier in Stalingrad was roughly 24 hours.

The fighting over the rubble and ruins was particularly interesting to historians in that it advanced urban warfare techniques significantly. New tactics had to be invented to deal with this situation that had never been seen before. Germans invented a gun that could shoot around corners, and the Soviets employed silent bombers that could strike the enemy undetected at night. However, food and supplies were scarce for both sides, and tens of thousands died every week.

Soviet efforts to retake the city were an undertaking of absolutely massive proportions that required immense logistical capabilities and meticulous planning. On November 19, 1942, 1,143,500 Soviet personnel, 894 tanks, 13,451 artillery pieces, and 1,500 aircraft took part in a massive encirclement to trap the German 6th Army. Within four days, Operation Uranus was complete, and the Germans were completely cut off.

Despite Hermann Goering’s overconfidence in his Luftwaffe (again), the attempts to resupply the German 6th Army were woefully inadequate. Two hundred seventy thousand Germans trapped in the Kessel, or “Cauldron,” of Stalingrad needed 700 tons of supplies per day or at least a minimum of 500 tons per day. The Luftwaffe was only realistically capable of supplying 106 tons per day and, in reality, only managed to provide 85 tons per day.

Not only did the Luftwaffe not have enough planes to perform the necessary activities, but it was also plagued by Soviet raids that further destroyed planes, killed aircrews, and destroyed supplies. Luftwaffe command was well aware of their inability to supply the 6th Army, and Goering was well-informed of this.

6. The Toll of the Russian Winter During the Battle of Stalingrad

The year before the Battle of Stalingrad had been the coldest winter on record in Russia. The Germans knew from experience that their situation was about to get horrifically uncomfortable. Without proper winter clothing and very few supplies getting through, the Germans fell victim to the cold. The conditions were excruciatingly miserable and deplorable. The cold regularly reached -25 degrees Celsius (-13 Fahrenheit) virtually every day throughout the winter.

The situation for the Soviets was also tough, but they were now on the offensive and had access to warmer clothes and more food than the Germans.

7. The German Public Was Unaware of the Situation

Back in Germany, the German public remained blissfully unaware of how terrible things really were for their brothers, fathers, and sons in Stalingrad. All the authorities had told them was that there had been some minor setbacks, and the battle for Stalingrad was taking slightly longer than expected.

It was almost two months after the encirclement that the German government finally admitted that the 6th Army had been encircled. Still, even then, the announcement was accompanied by a positive overtone and a belief that the 6th Army would ultimately prevail.

8. Goebbels Had to Give a Positive Spin on the Defeat

The 6th Army finally surrendered on February 2, 1943. Directly after the defeat, Reichminister of Propaganda, Josef Goebbels, instructed the media to create a myth of heroism around the defeat of the German 6th Army.

The official radio broadcast on February 3 was thus:

“The battle of Stalingrad has ended. True to their oath to fight to the last breath, the Sixth Army under the exemplary leadership of Field-Marshal Paulus has been overcome by the superiority of the enemy and by the unfavourable circumstances confronting our forces.”

Hitler ordered three days of mourning. During this time, all places of entertainment were shut down, and radio stations were ordered to play somber music.

9. The Final Casualty Count Was Enormous

Scholars debate the casualty count depending on how they determine the geographic scope of the battle: the whole campaign, or the fighting which happened specifically in the city. Either way, the casualty rate was unbelievably high.

Axis forces suffered at least 750,000 combat casualties which included killed, missing, or wounded. The actual figure is likely to be closer to one million. This included not only Germans but Italians, Romanians, Hungarians, and Hiwis or Hilfswillige–Soviet POWs and volunteers who fought for Germany. In addition to the human cost, the Axis lost 900 aircraft, hundreds of tanks, and many thousands of artillery pieces.

The Soviet losses were even worse. One million, one hundred twenty-nine thousand soldiers became casualties. Over 2,700 aircraft were lost, as well as over 4,000 tanks and almost 16,000 artillery pieces.

Of the 91,000 German soldiers who surrendered in Stalingrad on February 2, only 5,000 ever saw Germany again.

10. The Battle of Stalingrad Triggered a Change In German War Policy

After Stalingrad, Hitler, his generals, and the Oberkommando der Wehrmacht (Armed Forces High Command) realized that there was more at stake than simply losing the war against Russia. They realized that Russia could drive German forces all the way back to Germany. The threat to Germany was now existential, and everything possible was needed to avert the complete annihilation of the Nazi state.

Adolf Hitler decided that an all-out mobilization of the entire German state was needed, and thus the defeat at Stalingrad led to the Total War Speech at the Berlin Sportpalast, in which, among a specially selected crowd, Goebbels gave a speech emphasizing the need for all Germans to contribute to the war effort.

11. The Battle of Stalingrad Is Commemorated Today

The war on the Eastern Front was utterly brutal. The total cost of human life lost there outweighed all other theaters of the war. More than 80 percent of all German casualties happened on the Eastern Front, making the war against the Western Allies seem like a sideshow.

The Battle of Stalingrad was the most bloody moment of the war on the Eastern Front. It was the bloodiest moment both of World War II and the entire century and arguably the most brutal battle in all human history.

In 1967, a statue was built upon the hill Mamayev Kurgan overlooking Stalingrad. The Motherland Calls! Stands 85 meters (279 feet) tall and, at the time, was the tallest statue in the world. Every year, the battle is commemorated with parades.