HomeArtistsFrançois Boucher: Representing the Taste of a Century

François Boucher: Representing the Taste of a Century

The 18th-century artist, François Boucher, became known for his Rococo style. He is also known for his ties to King Louis XV and his famous mistress Madame de Pompadour. 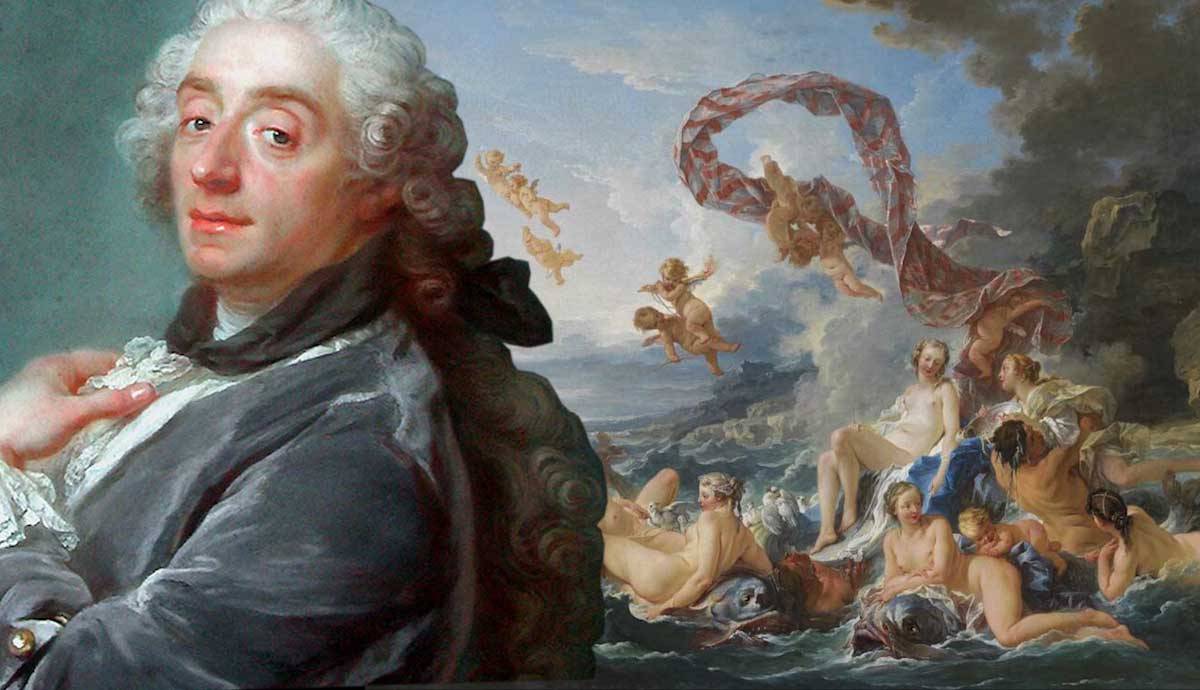 The Artist’s Life and Career

François Boucher was born in 1703 as the son of Nicolas Boucher, a lace designer. The artist was trained by his father. He also studied with one of the leading historical painters and decorative artists of his time, François Lemoyne, in the early 1720s. Boucher won the Prix de Rome in 1723. The Prix de Rome was a scholarship that enabled students at the Académie Royale de Peinture et de Sculpture in Paris to spend three to five years in Rome studying. There they would be able to refine their craft.

It was a prestigious award that was considered a stepping stone in an artist’s career. Many important French architects and artists won the Prix de Rome, including Jacques-Louis David. Since the funds were not sufficient to pay for Boucher’s stay in Rome, the artist earned a living by painting and printmaking. He went to Rome in 1728 at his own expense and came back to Paris in 1731.

François Boucher’s immensely successful career started when he returned from Paris. He was admitted to the Académie royale de peinture et de sculpture as a history painter in 1731 and received his first royal commission for decorations at Versailles in 1735. Boucher continued to work for the court. He also started to create tapestry designs for the Beauvais factory.

In 1955, Boucher became director of the French tapestry manufactory Gobelins. Ten years later, the artist was made the director of the Académie Royale and received the honorable title of the first painter to the king, also called premier peintre du roi. François Boucher died in Paris in 1770 when he was 66 years old. After his death, Boucher’s collection was auctioned off at an estate sale for 98,829 livres. This was an exorbitantly high amount compared to the average income. Even for the wealthiest five percent of French households, the average yearly income in 1781 was 3,670 livres.

Boucher, the French Rococo Style, and His Love for Shells

The Rococo style originated in France in the early 18th century. It is also often referred to as the late Baroque period. It was probably one of Jacques-Louis David’s students who coined the term by combining the word rocaille with barocco. The term rocaille was used to describe extravagant rock-work and shell-work for fountains and grottoes. Later it was used for lavishly carved decorations based on this style. At first, Rococo had a pejorative connotation. The opulent and excessively ornamental style was often seen as tasteless.

Today, however, the use of the term is neutral. The style was a reaction to its heavier predecessor, the Baroque style. Both used complex forms, but the Rococo style was characterized by a lighter, more delicate, playful, intimate, and asymmetrical appearance with intricate curves and decorations. Even though the style originated in France, it soon became very popular in many European countries like Germany, Austria, Russia, Spain, and northern Italy. The style is often associated with Louis XV and Boucher, who was one of the most important representatives of the movement.

François Boucher was also an enthusiastic shell collector. He wanted his shells to be sold for 6692 livres at his posthumous estate sale. It is not surprising that his shells also found a way into his Rococo-style paintings since the French word rocaille literally meant rock or a broken shell. When Boucher returned to Paris from his trip to Rome in 1731, the collecting of shells had become a fashionable hobby, so the artist started to collect them as well.

In the 1940s, shells became a prominent characteristic of the artist’s mythological paintings, for which his 1741 painting  The Birth of Venus is the first example. It was made for the Comte de Tessin, who was also a shell collector. The triton depicted in the image is holding a large and spiky shell, which is a reference to the cover of a classic book about shells, the Recreatio Mentis et Oculi In Observatione Animalium Testaeceorum, Curiosis Naturae Inspectoribus by Filippo Bonanni. Boucher also used shells as motifs in his paintings The Risings of the Sun, Venus on the Waves, and Juno Commands Aelos to Unleash the Winds.

François Boucher is known for his pastoral subjects. His reinvention of the theme was not only his most ingenious contribution to painting in the Rococo style, but it also became a trademark of the movement. The artist’s decorative and light-hearted paintings represented the predominant style until Neoclassicism came along in the second half of the 18th century. Meanwhile, his pastoral paintings showed idealized and carefree depictions of rural life, often with an erotic undertone. Common themes were young lovers, sheep, shepherds, and aesthetically pleasing landscapes. These images were inspired by operas of Charles Simon Favart and Jean Monnet, for which Boucher designed the stage sets.

Boucher’s Relationship With the Royals

The Rococo style is often associated with King Louis XV and his influential mistress Madame de Pompadour. Since François Boucher received various royal commissions and was appointed the first painter to the king, it is not surprising that the artist’s style became characteristic of the king’s court during the 1740s and 1750s. The decorations Boucher created for Louis XV included works at Versailles, the Château de Bellevue, the Château de Choisy, and the palace of Fontainebleau. Boucher’s most original pieces for the king were two images depicting the subject of hunting titled The Tiger Chase and Crocodile Hunting, which he painted for the private apartments of Louis XV at Versailles.

François Boucher was one of the Marquise de Pompadour’s favorite artists. He painted several portraits of her and gave her lessons. Even though Boucher did not paint many portraits, his large depiction of Madame the Pompadour made in 1756 is considered one of his masterpieces.

The two works titled The Rising of the Sun and The Setting of the Sun, which Boucher did for Madame de Pompadour were valued greatly by the artist and several of his contemporaries. Modern art historians often call them masterpieces, but the works were also harshly criticized at the time. The art historian Melissa Hyde suggests its threatening nature regarding gender hierarchies as one of the reasons.

The critic La Font de Saint-Yenne took offense to the fact that the naiads in the image, the nymphs of flowing water in Greek mythology, were not paying enough attention to Apollo. He also felt that female viewers should not be able to see these works. The critic was arguably concerned about the pieces’ diversion from the familiar (male) spectatorship, which was emphasized by the fact that they were commissioned by a woman, namely the Marquise de Pompadour.

During the last years of his career, François Boucher faced a lot of criticism. With the emergence of the more structured and symmetrical Neoclassicism, Boucher’s playful and frivolous Rococo works began to lose their appeal. Other reasons for the decline of his reputation were the repetitive and artificial nature of his works, overproduction, and his color palette. Denis Diderot, who was probably Boucher’s most famous critic, wrote in a quite funny manner that the artist “no longer has but two colors: white and red; and he does not paint a single nude woman without her bottom being as made up as her face.”

One of Boucher’s Odalisque portraits was also condemned by Diderot. The term odalisque was used to refer to a concubine in a harem and the subject was portrayed in many art historical images. Diderot claimed that François Boucher was using his own wife for the image. In another harsh review regarding the 1761 Salon, Diderot wrote: Cet homme a tout – excepté la verité, which can be translated as: That man is capable of everything – except the truth. Despite this criticism, Boucher continued to exhibit his light-hearted and playful scenes at the Salon.